Woolworths has hinted there are ‘ultra rare’ Ooshies to collect as shoppers speculated ‘furry’ Thor and Baby Yoda will be joining the 36-piece set.

Customers have been racing to get their hands on the iconic characters from Marvel, Star Wars, Disney and Pixar with every $30 spent in store or online.

The supermarket is yet to officially release the names of the ‘ultra rare’ Ooshies – but a ‘leaked’ picture on social media has emerged suggesting there’s going to be ‘furry’ versions of Thor and The Child from Star Wars to collect.

It’s understood there will only be 100 of each ultra rare Ooshies circulating around Australia.

The never-before-seen collectables were pictured alongside the four glitter versions of Elsa from Frozen, Woody from Toy Story, Captain Marvel and The Mandalorian from Star Wars.

In addition to the 36 characters, the supermarket chain confirmed on its website there’s ‘rare and ultra-rare’ Ooshies to collect. 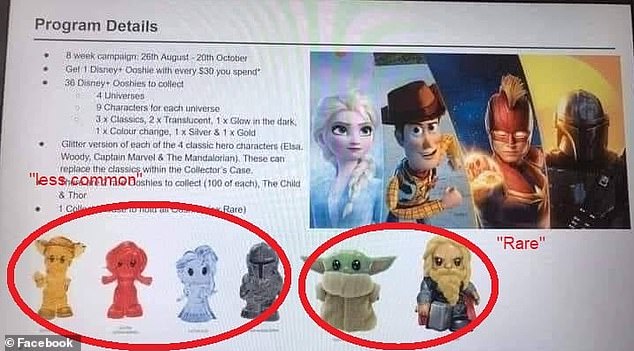 In a statement to Daily Mail Australia, a Woolworths spokesman declined to comment on the ultra rare Ooshies, but said: ‘We’ve partnered with our friends at Disney+ to bring some excitement and magic to our customers’ shop.

‘We’ve been pleased to see so many of them enjoying beginning their collections this week. We’re always looking at new ways to make our collections unique and we’ll have more to reveal in the coming weeks.’

The rare collectables could make you a fortune after some customers attempted to cash in on the rare furry Simba from the Lion King Ooshies set on eBay last year, with eBay bids fetching up to $100,000.

The supermarket confirmed at the time the rarest Ooshies character to look out for was the ‘Furry Simba’, with only 100 of them circulating around the country. 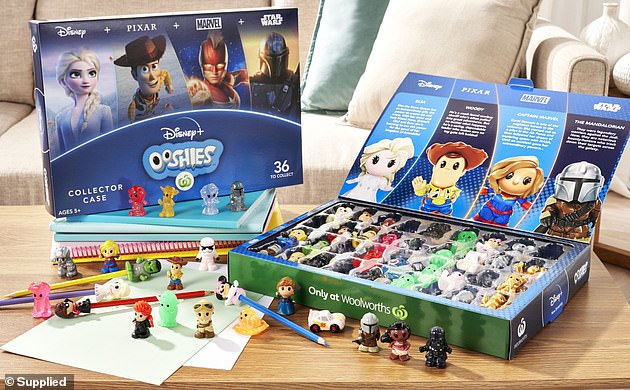 Customers have been racing to collect one of 36 iconic characters from Marvel, Star Wars, Disney and Pixar with every $30 spent in store or online

The new set also includes silver, gold, translucent, colour changing and glow in the dark Ooshies, which can all be kept in a limited-edition box.

‘We know many Aussie families have had a challenging year, so we’re partnering with Disney to give our customers something exciting to look forward to from their everyday shop,’ Woolworths chief marketing officer Andrew Hicks said.

‘Whether it’s Woody, a hologram Princess Leia or a glow in the dark Yoda, we’re confident the collection is something the entire family can enjoy and collect together.’ 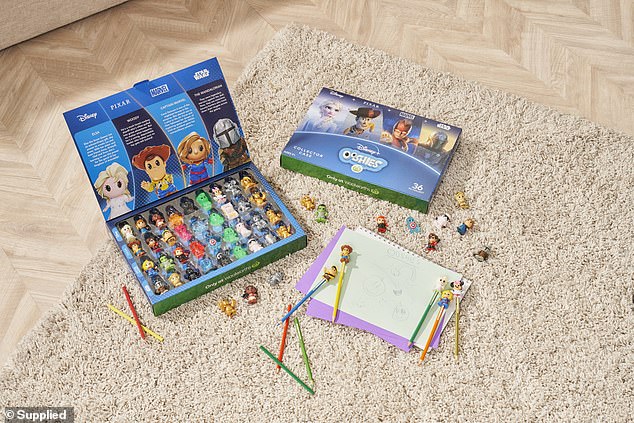 The latest set also includes silver, gold, translucent, colour changing and glow in the dark Ooshies, which can all be kept in a limited-edition box

Unfortunately there will be a delay on the launch for customers in Victoria until lockdown restrictions ease to focus on store operations and safety of team members and customers.

‘We know some customers in Victoria will be disappointed by the delayed roll out, but the safety and wellbeing of our customers, team members, and community remains our number one priority,’ Mr Hicks said.

‘The delay will allow our team to focus on operations and supplying customers with their everyday essentials during this challenging period.

‘Once restrictions ease and we can safely roll out the program, we look forward to sharing the Disney magic with our Victorian customers.’