An amused shopper has shared the hilarious moment Woolworths accidentally delivered her 17 kilos worth of carrots.

The woman, from Sydney, had purchased just two kilos of carrots in her online order – but she was surprised to find 17 bags among her grocery haul.

In a TikTok video, the customer can be heard laughing hysterically as she filmed the two large shopping bags filled to the brim with carrots. 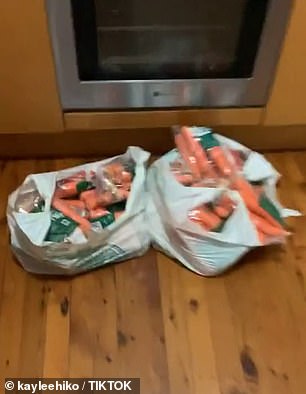 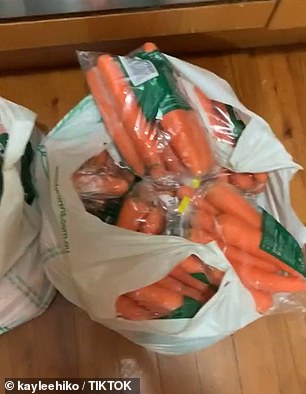 ‘Woolworths online f***ed up and sent us 17 kilos of carrots,’ the woman said in her video, before bursting out with laughter.

The woman quickly saw the funny side as she confirmed she was giving away the root vegetables to her family and friends.

‘I have some family and friends taking some off my hands,’ she said.

A Woolworths spokesperson told Daily Mail Australia: ‘This is certainly a unique situation, and we’d be happy to look into it further if the customer wishes to make contact with us.

‘We’re pleased to hear they plan to share the excess carrots with family and friends. We have some good carrot cake recipes if they’re interested in a bake-off.’

The video has since been viewed more than 90,000 times, with dozens of people sharing similar stories about their online order mistakes. 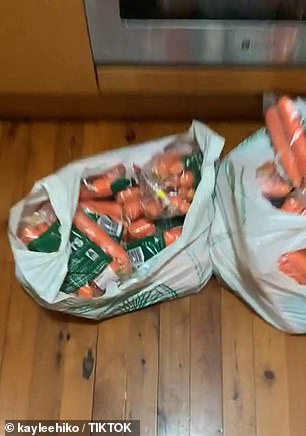 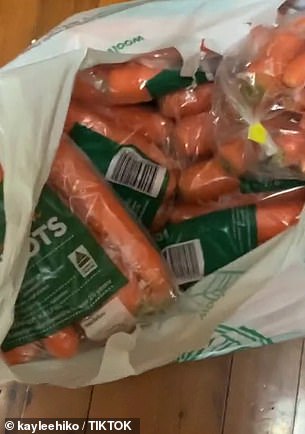 The woman, from Sydney, had purchased just two kilos of carrots in her online order – but she was surprised to find 17 bags among her grocery haul

‘I once thought I had ordered eight individual onions without realising it was actually eight kilos,’ a shopper wrote.

Another woman said she purchased just five single bananas but ended up with 25 while one family revealed they received $45 worth of ginger for free.

Many asked the woman whether she had made a mistake by accidentally adding 17 bags of carrots to her order but she insisted she only purchased two.

However, an employee defended the supermarket, claiming she’s noticed a number of customers mistakenly ordering more items than intended.

‘Trust me, I do online orders at Woolies. No one packs this by accident, but it’s relatively common that people order kilos of produce by mistakes,’ she commented on the video.

‘I had someone order 35 bags of mushrooms one time. When they came in to pick up, they said they only meant to order one.’