A woman who hasn’t received a birthday, Christmas or anniversary present from her husband in recent years has been warned that the action could be an indication of other problems in their relationship.

Posting anonymously on Mumsnet, the British woman said her husband does nothing to mark special occasions, even though she bought gifts and cards for him.

The post divided opinion, with many labeling her husband ‘selfish’ and warning his behaviour could be a sign that there are other issues between them. However, others said they don’t expect presents from their significant other on special occasions. 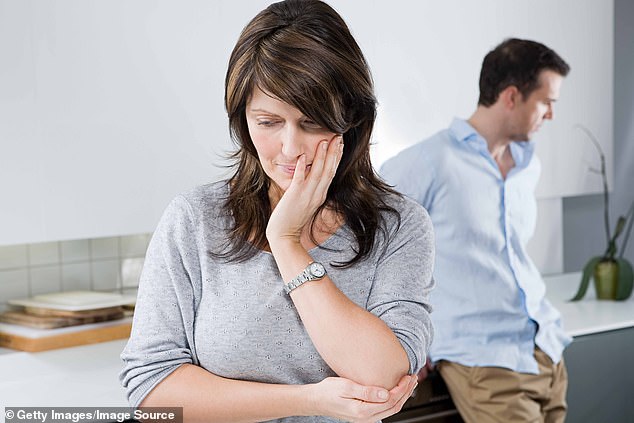 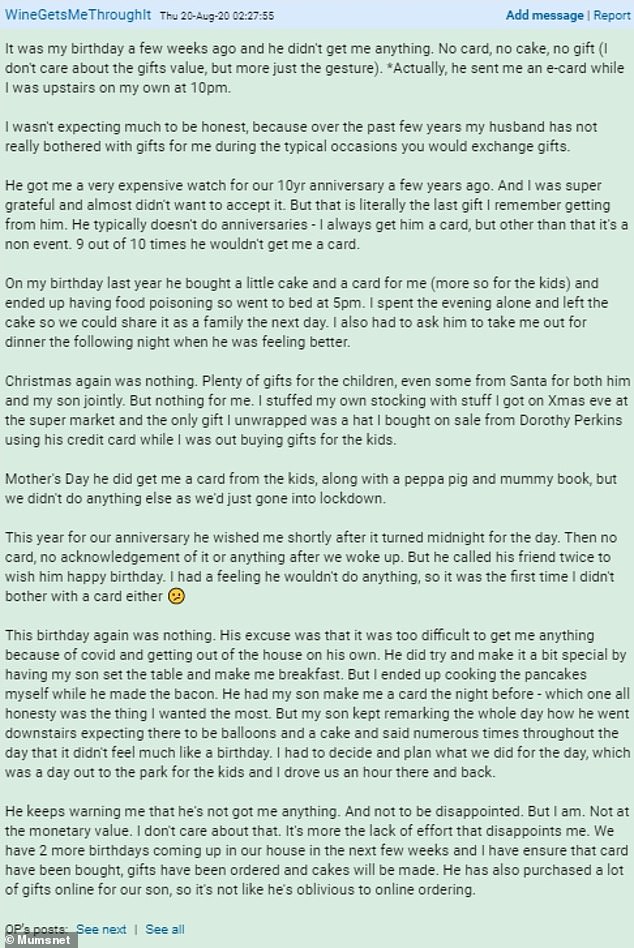 In a lengthy post, the woman explained the last gift she received from her husband was an expensive watch on their 10-year anniversary a few years ago.

She wrote: ‘This year for our anniversary he wished me shortly after it turned midnight for the day. Then no card, no acknowledgement of it or anything after we woke up. But he called his friend twice to wish him happy birthday. I had a feeling he wouldn’t do anything, so it was the first time I didn’t bother with a card either.

‘This birthday again was nothing. His excuse was that it was too difficult to get me anything because of covid and getting out of the house on his own. He did try and make it a bit special by having my son set the table and make me breakfast. But I ended up cooking the pancakes myself while he made the bacon.

‘I had to decide and plan what we did for the day, which was a day out to the park for the kids and I drove us an hour there and back.

‘We have 2 more birthdays coming up in our house in the next few weeks and I have ensure that card have been bought, gifts have been ordered and cakes will be made. He has also purchased a lot of gifts online for our son, so it’s not like he’s oblivious to online ordering.’

Most responses to the post dubbed the husband’s behaviour as ‘selfish’ and advised the woman to voice her disappointment.

One person wrote: ‘I really don’t understand him OP. If he didn’t bother doing anything anybody, would be bad enough, but in some ways making an effort for others but not you seems worse.’

Another said: ‘If he used to make the effort and has now stopped, i’d say that’s indicative of other problems in your relationship. How are things generally between you?’

Others said they don’t buy gifts for their significant other and see every day as ordinary.

‘I’m not really sure why people get upset about this stuff. We have never celebrated our anniversary. It was 25 a couple of years ago and we ever even mentioned it.

‘I’ve not desire to go on holiday with him or sit across a table form him, I’d much rather do something I want to do on my own or with the kids. And as for birthdays, it’s just another day.

‘Why would you happy taking a gift from someone who’ve you’ve guilt tripped into buying you something?! If you want something nice, buy it yourself,’ one wrote.