A woman who had never had a single pimple until she took birth control pills that caused her face to break out in cystic acne has revealed how the condition was so severe it affected her sight.

Mina Stein, 20, from Frankfurt, Germany, has struggled with acne for the past two years after birth control pills triggered a change in her skin.

After an initial knock to her confidence, Mina, who is an office management assistant, is now championing the acne positivity trend and encouraging others to embrace their skin.

For most of her teenage years Mina had clear skin, and so the sudden change came as quite a shock. 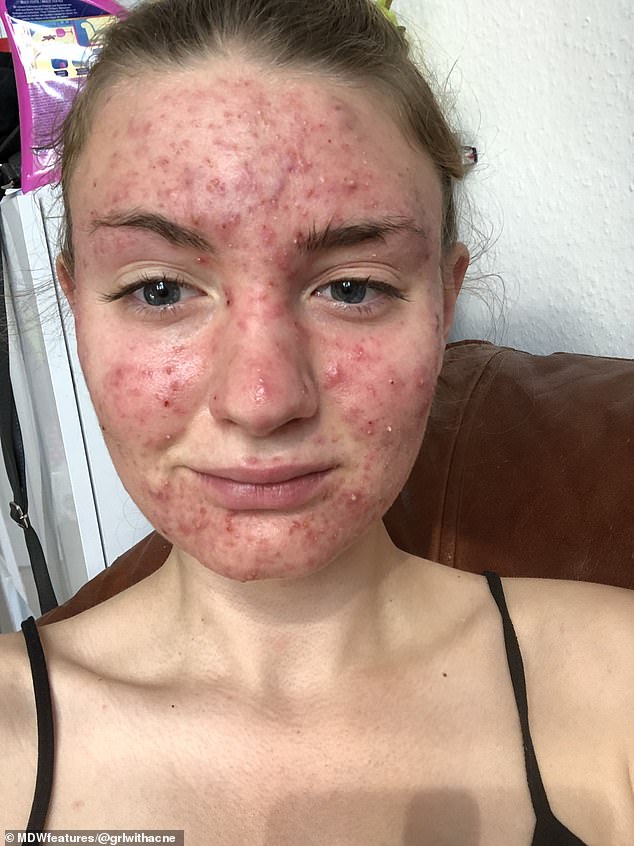 Mina Stein, 20,  (pictured) from Frankfurt, Germany, is encouraging others to embrace their skin after developing cystic acne 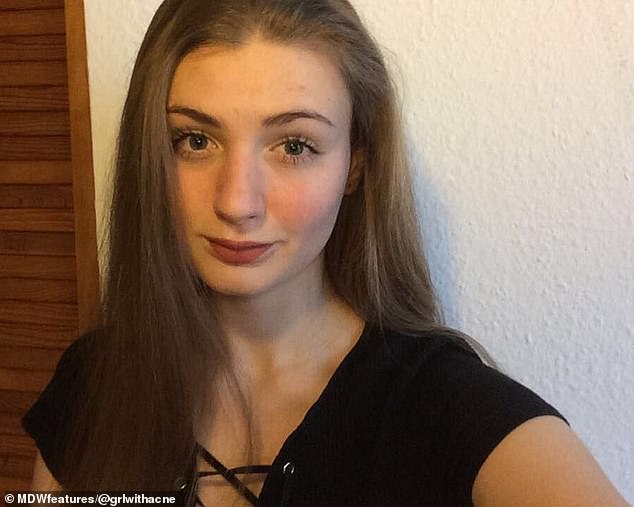 Mina (pictured before), who had clear skin throughout her teenage years, says her skin changed when she began taking birth control pills

Mina began taking birth control pills in 2018, when acne was not listed as a side effect – however this has since changed.

The 20-year-old, who developed acne as soon as she started taking the pills, says the condition started out with a few faint pimples but a few months later, she was suffering from painful cysts, swelling of the face, and rosacea – a condition causing redness in the skin.

‘I wasn’t aware acne was a side effect of the birth control pills as it was never mentioned in the packaging insert,’ she explained. ‘It started developing immediately. At first, I got red bumps under the skin on my cheeks and a few pimples on my forehead.

‘Then the pimples became more painful and my face would swell. I developed cysts and rosacea. I switched birth control pills but it wouldn’t go away. It only got worse.’ 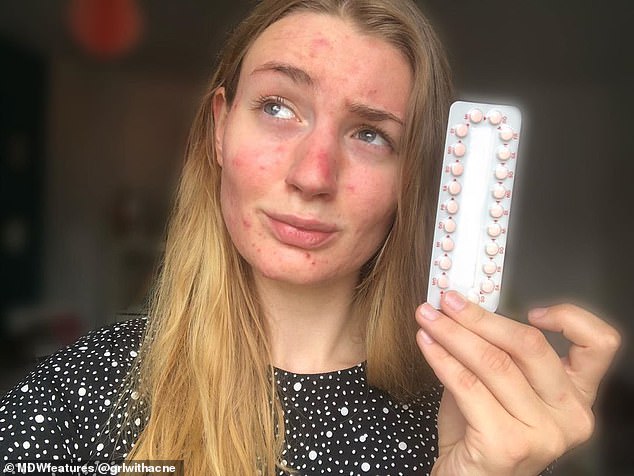 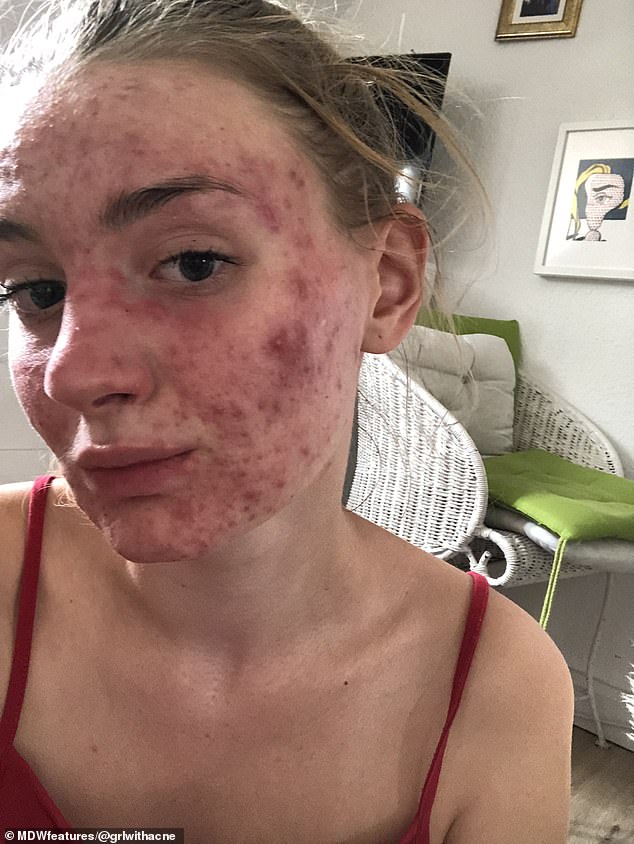 Having experienced dismissive dermatologists, Mina would often consider cancelling plans with friends for fear of appearing in photos or being judged for her acne.

WHAT IS CYSTIC ACNE?

Cystic acne is the most serious type of acne. It develops when cysts form deep underneath your skin.

This can result from a combination of bacteria, oil, and dry skin cells that get trapped in your pores.

Although anyone can develop acne, cystic acne tends to occur in people with oily skin. It’s also more common in teens, women, and older adults with hormonal imbalances.

Usually, cystic acne can improve with age. However, the stubborn and painful bumps won’t go away on their own.

If you suspect you have cystic acne, your dermatologist is your best line of defense. They can prescribe the medication necessary to help clear your skin.

‘It definitely influenced my confidence,’ she said. ‘I didn’t want to look in the mirror or be in photos – or even look anyone in the eye.

‘I cried a lot. I’d never had skin issues before so I felt totally overwhelmed.

At the time, some of my friends were abroad and I was so worried about what they’d say when they came back.

‘I didn’t know whether to see people but I decided to anyway and it was fine. I’d never felt that way before – so powerless.

‘By that stage, it was very much a rollercoaster. Some days my acne would look better and then worse again the next.

The cysts began to bleed and bruise causing blue patches to appear, and the pain was so bad that Mina struggled to sleep comfortably.

‘My cysts began to bruise and I’d cry if anything touched them as they were so painful,’ she explained. ‘They’d bleed when I washed my face.’

She claims her skin becoming extremely dry, particularly around her eyes where the tightening of the skin blurred her eyesight.

‘The rosacea also caused my face to become red and swollen which affected my self-esteem.’

Mina, who has tried various skincare brands, is yet to find an effective solution. The skincare brand, Paula’s Choice, alleviates her symptoms the best by reducing dryness and soreness. 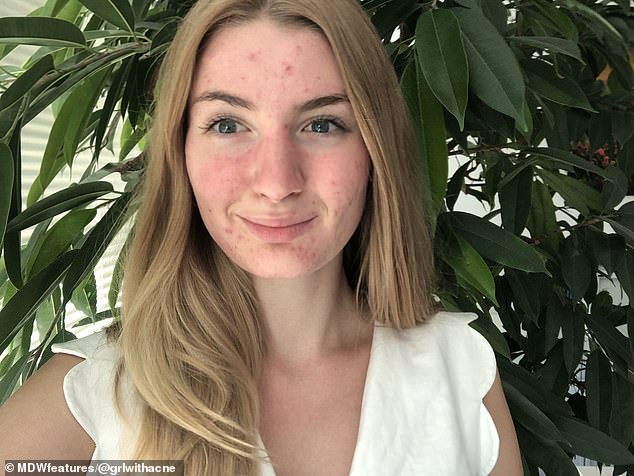 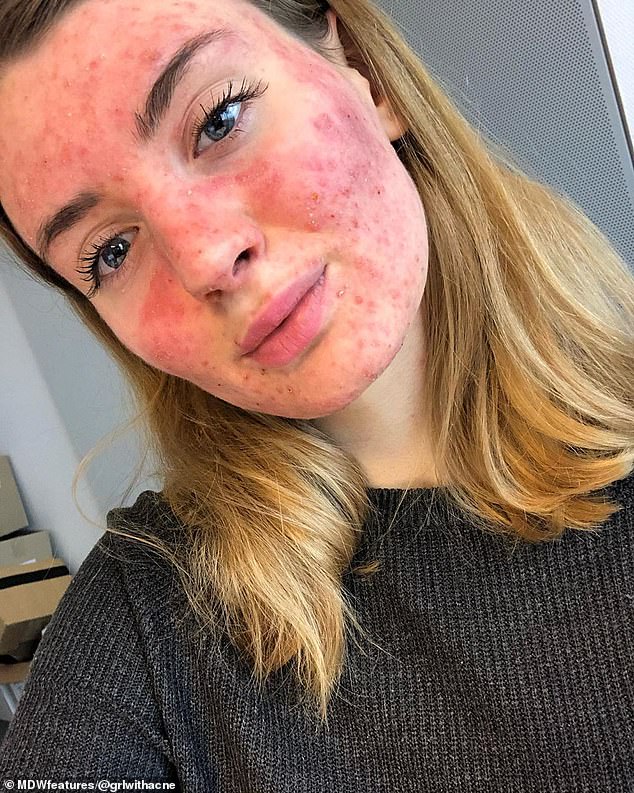 During a trip to the supermarket, a young girl standing by Mina turned to her mum and asked “what does that girl have on her face?” Initially shocked by the comment, Mina explained acne to the young girl and it soon became a turning point in Mina’s outlook.

She joined the acne positivity community on Instagram in August 2019 and felt immediately more confident after posting her first bare-faced selfie.

Now, Mina encourages her 13,000 followers to embrace their skin and hopes to continue promoting self-love.

‘I thought about trying Accutane but I was dissuaded by unfriendly dermatologists,’ she said. ‘Paula’s Choice skincare has been my best find so far.’

Since posting bare-faced selfies on Instagram, Mina has been able to regain her confidence. Not only that, but many other acne sufferers have reached out to Mina for advice and support. 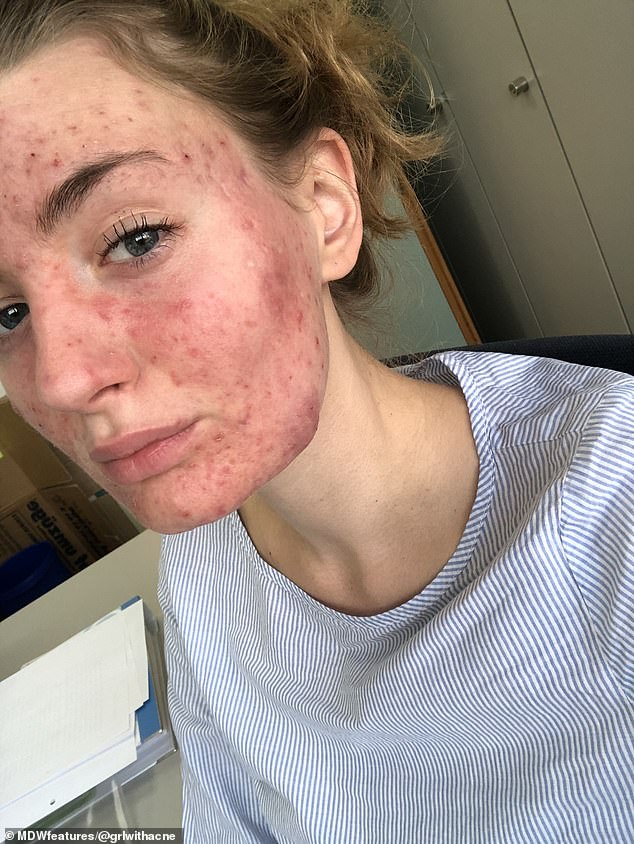 ‘I remember being in a supermarket and a little girl, who was about three-years-old, asked her mum what I had on my face. I explained what acne was to her and after that, she didn’t seem to mind – and in fact, started showing me her sweets,’ she said.

‘After that, I started my Instagram account where I began to post about self-love. I’d been following similar accounts for a few months and loved seeing other people’s improvements in their skin.

‘I was so proud of myself after taking my first bare-faced selfie and I felt a lot stronger. Now I receive so many messages from people thanking me for my posts or empowering me to keep going.

‘The messages are from people all over the world so it makes you feel less alone. My followers even tag me in their own bare-faced photos which I love.

‘Treat yourself the way you treat others. We need to stop criticising how we look and compliment ourselves instead. Everyone is uniquely beautiful and should remember that.’ 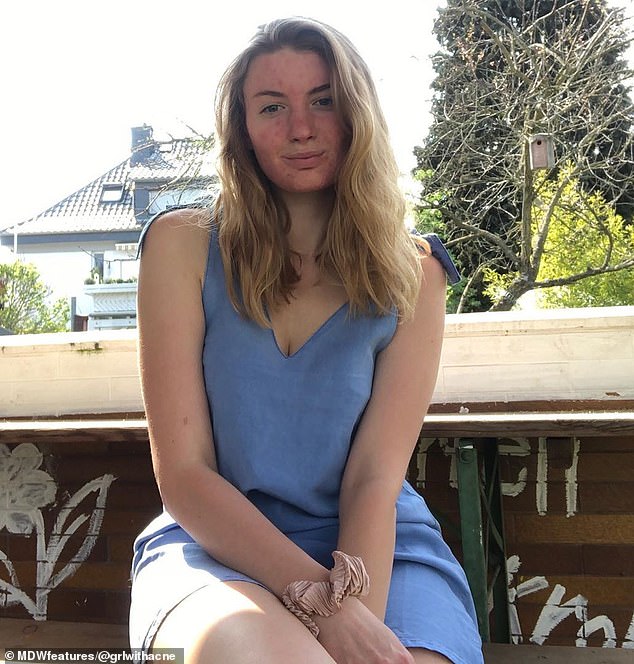