A distraught wife is seeking advice to help fix her rocky marriage after her husband suddenly became obsessed with the idea of opening a ‘restaurant for magicians.’

The woman, 32, shared her plight on Reddit this week, and the bizarre nature of her problem has attracted even more attention on Twitter.

She explained that her 36-year-old partner of eight years and the father of her children has recently grown infatuated with the idea of opening a very specific and gimmicky theme restaurant, and his ‘dream’ is being fueled by a new magician friend — but both the restaurant idea and the new friendship are proving quite troubling for their marriage. 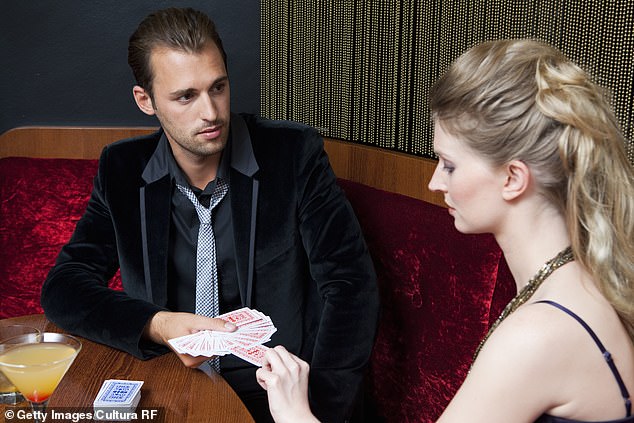 She explained that she and her husband have been together for eight years and have a four-year-old son and a two-year-old daughter.

‘Our relationship has been a little rocky, partly due to his highly demanding job in the restaurant industry, but we love each other deeply, and always will,’ she said.

For the past three years he has made enough to support the family as head chef at a successful restaurant, and she has quit her job to stay home and raise the kids.

But now, their financial security is at risk, as her husband has grown obsessed with a strange potential business venture.

‘For the past four or so months, he has been floating the idea of starting a “restaurant for magicians,” with increasing seriousness and dedication’ she wrote.

‘It is not obvious what this entails, so I ought to explain. He envisions a restaurant which, unbeknownst to the general public, is littered with magical props: levitating tables, bending cutlery, and torn-and-restored menus, to name a few. 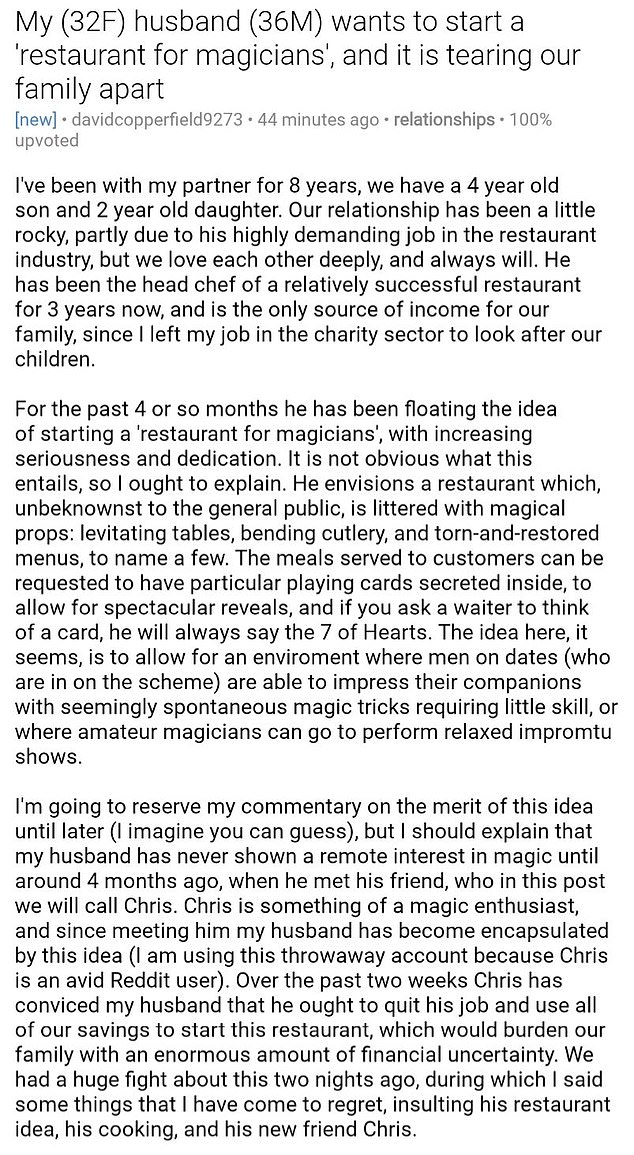 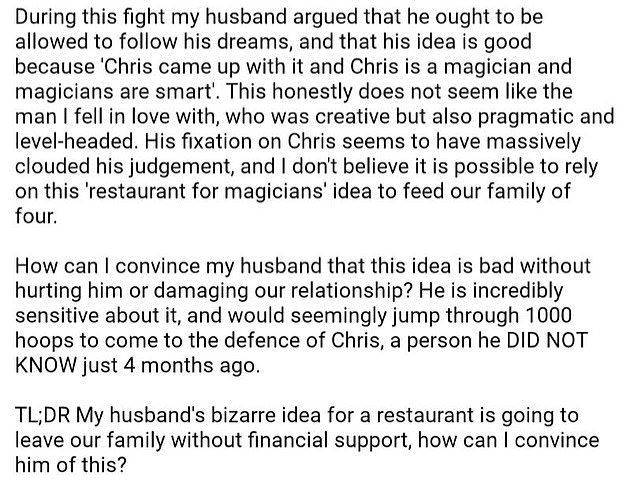 Wow… Four months ago he met a new friend name Chris, a magician who convinced him he should open a restaurant with magical props like levitating tables and bending cutlery

‘The meals served to customers can be requested to have particular playing cars secreted inside, to allow for spectacular reveals, and if you ask a waiter to think of a card, he will always say the 7 of Hearts,’ she wrote.

But there’s more. According to the woman, it won’t be advertised as a restaurant for magicians — only some customers would know.

‘The idea here, it seems, is to allow for an environment where men on dates (who are in on the scheme) are able to impress their companions with seemingly spontaneous magic tricks requiring little skill, or where amateur magicians can go to perform relaxed impromptu shows,’ she said.

She didn’t explain whether her husband had a way to make sure that only some people are aware that it’s a magic restaurant.

Unsurprisingly, she isn’t too thrilled with the idea of him making such a risky business move. What’s more, she’s concerned about the person who seems to have given him the idea in the first place.

‘I’m going to reserve my commentary on the merit of this idea until later (I imagine you can guess), but I should explain that my husband has never shown a remote interest in magic until around four months ago, when he met his friend, who in this post will be called Chris.

‘Chris is something of a magic enthusiast, and since meeting him my husband has become encapsulated by this idea,’ she went on.

‘Over the past two weeks, Chris has convinced my husband that he ought to quit his job and use all of our savings to start this restaurant, which would burden our family with an enormous amount of financial uncertainty.

‘We had a huge fight about this two nights ago, during which I said some things that I have come to regret, insulting his restaurant idea, his cooking, and his new friend Chris.

‘During this fight, my husband argued that he ought to be allowed to follow his dreams, and that his idea is good because “Chris came up with it and Chris is a magician and magicians are smart.”

Bubble: Nearly everyone — except Chris and the woman’s husband — seem to be in agreement that this is a terrible idea

‘This honestly does not seem like the man I fell in love with, who was creative but also pragmatic and level-headed. His fixation on Chris seems to have massively clouded his judgement, and I don’t believe it is possible to rely on this “restaurant for magicians” idea to feed out family of four.’

She concluded by asking for advice on how to convince her husband that this is a bad idea without hurting their relationship.

On Twitter, where the story has been liked over 17,000 times, people are cracking jokes about the bizarre post.

Even Chrissy Teigen chimed in, writing: ‘I’m pretty sure “chris” is gonna know this is about him.’

‘This is, by far, the funniest way to destroy a family,’ wrote another Twitter user.

‘Restaurant for magicians is sawing our family in half,’ joked yet another.

Some suggested that the woman’s husband might be having an affair — even if only an emotional one — with Chris.

‘I’m pretty sure her husband is in love with Chris,’ wrote one.

Others lost it at the idea that her husband and Chris both thing women would be impressed by restaurant magic tricks on dates, with a few questioned how those women would be kept in the dark in the first place.

‘As soon as there was publicity (and how else would anyone know about it?) the dates would all know. Trying to imagine Yelp page: MEN ONLY! WOMEN YOU ARE NOT ALLOWED TO READ THESE REVIEWS. Couples could only ever go once!’ one wrote.

Over on Reddit, people gave more thoughtful advice. Some suggested her husband and Chris might be doing drugs, while others said it sounded like a manic episode in someone with bipolar disorder.

‘Huge idea, out of left field, massive financial commitment, utter lack of planning, and a fixation. OP, has your husband ever seen a therapist or psychiatrist? Maybe ask him to visit couples counseling with you “to mediate” your discussion of his idea,’ wrote one.

‘Are you absolutely certain Chris and your husband aren’t taking hard drugs together? That amatuer magician restaurant sounds like something people whacked out on stimulants would think up,’ asked another.