A mother who converted a cupboard in her small flat to create a bedroom for her toddler son has divided opinion among an online DIY group.

Sofie King who lives in the UK, told members of Facebook’s DIY On A Budget UK, that she was able to create a Toy Story-themed bedroom for her 19-month-old son, Mason, for just £125.

She explained that space in their one-bedroom flat it limited, so she decided to take the door off a cupboard to make a small room for her son, with his bed on a low shelf and his toys stacked on shelves above.

Many responses to the post praised Sofie for her creativity and the joy on her son’s face in a clip reacting to the new bedroom, however one person argued the DIY project could be putting the toddler in ‘danger’ if a shelf collapsed. 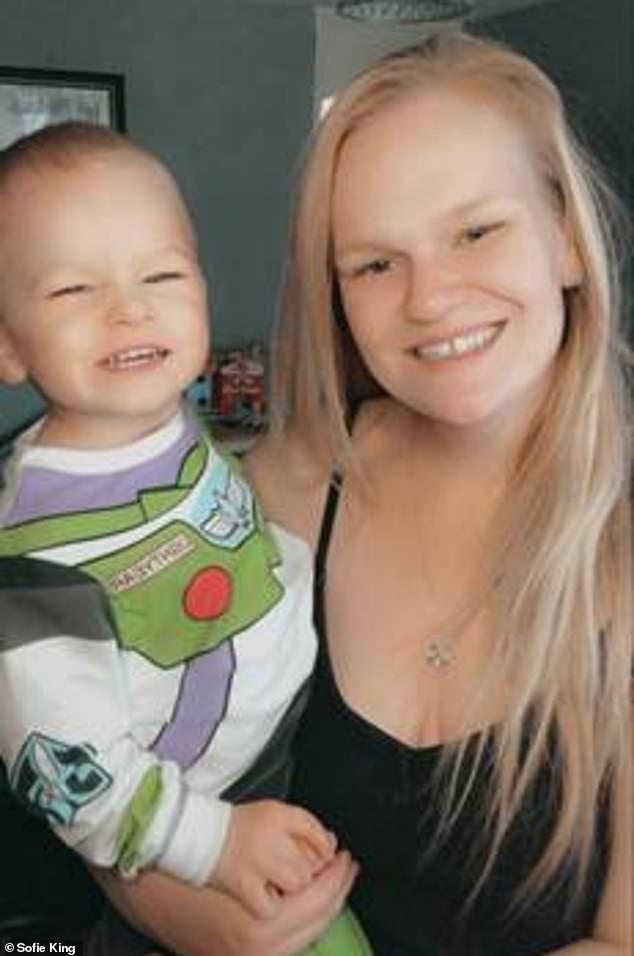 Sofie King transformed a spare cupboard in her one-bedroom flat into a space for her 19-month-old son to sleep. Pictured: Sofie and her son 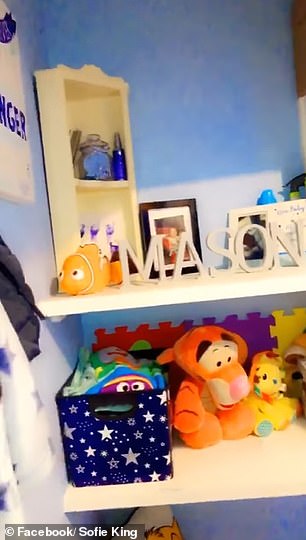 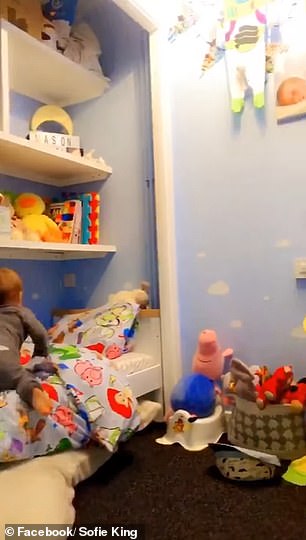 Sofie posted a video on Facebook’s DIY On A Budget UK, revealing her son’s reaction to the Toy Story themed space (pictured) 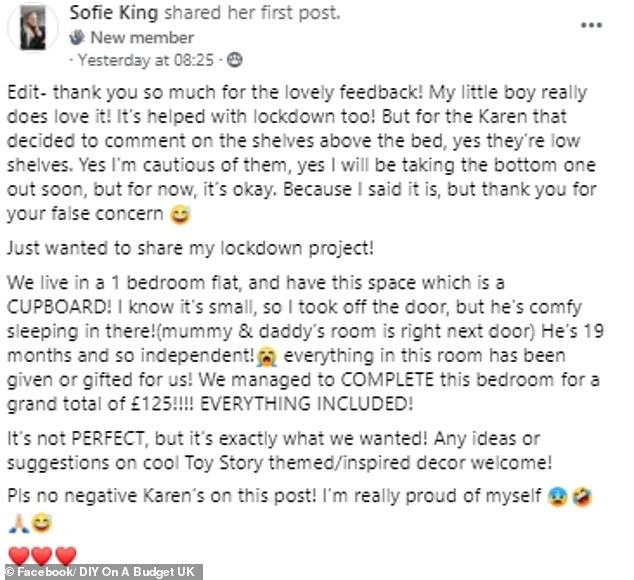 Sofie posted a video of her 19-month-old son happily exploring the space and searching through his toy collection.

Explaining that it was a lockdown project, she wrote: ‘We live in a one bedroom flat and have this space which is a cupboard! I know it’s small, so I took off the door, but he’s comfy sleeping in there! (Mummy and Daddy’s room is right next door)

‘He’s 19 months and so independent! Everything in this room has been given or gifted for us! We managed to complete this bedroom for a grand total of £125! Everything included!

‘It’s not perfect, but it’s exactly what we wanted! Any ideas or suggestions on cool Toy Story themed/ inspired decor welcome! Please no negative Karen’s on this post! I’m really proud of myself’.

The post quickly racked up over 600 likes and a stream of comments.

Concerned about the layout of the room, one person wrote: ‘How can you call someone a ‘Karen’ for having common sense I don’t know. Let’s hope the poor sod doesn’t bang his head or nothing falls on him.’ 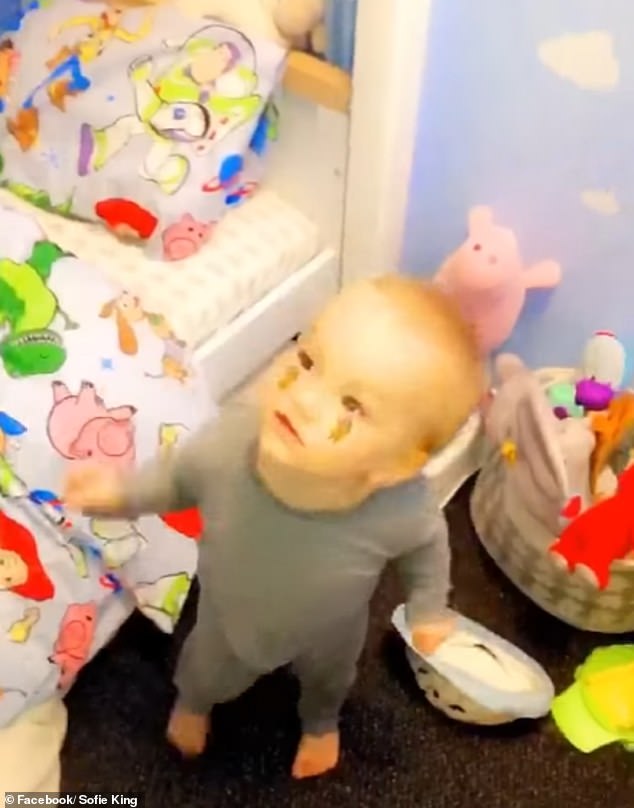 Sofie explained she was able to achieve the room transformation for £125 because many of the items were gifted by others. Pictured: The 19-month-old 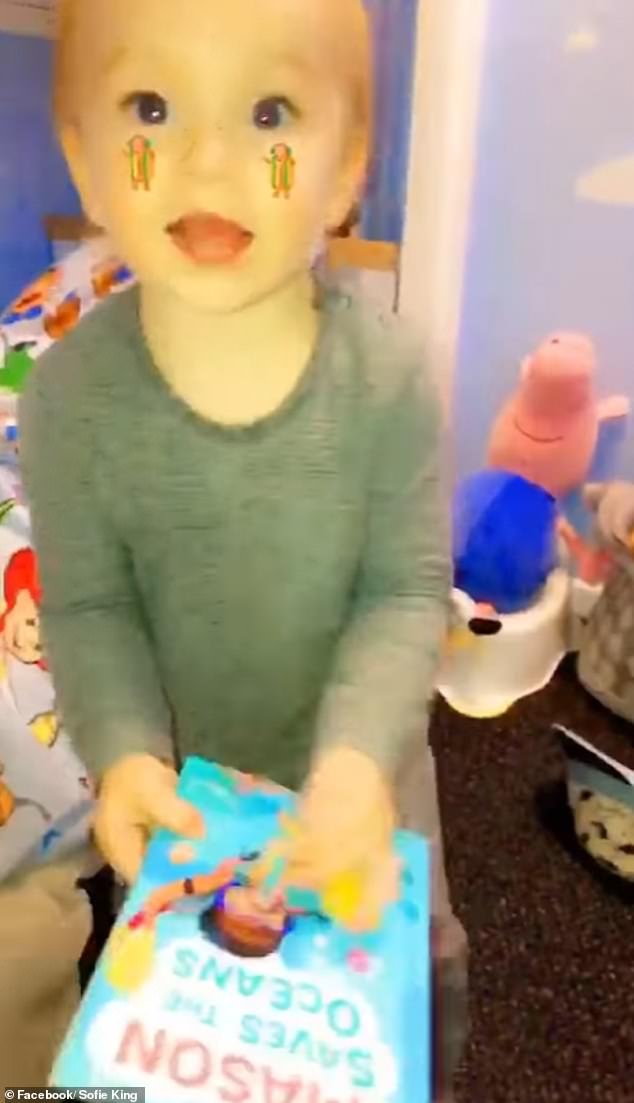 Sofie added that she had spent lockdown working on creating the room because her son is independent. Pictured: The 19-month-old

Sofie who was unimpressed with the critique, edited her post to focus on the positive feedback that she received.

She wrote: ‘Thank you so much for the lovely feedback! My little boy really does love it! It’s helped with lockdown too! But for the Karen that decided to comment on the shelves above the bed, yes they’re low shelves.

‘Yes I’m cautious of them, yes I will be taking the bottom one out soon, but for now, it’s okay. Because I said it is, but thank you for your false concern.’

Others argued the design of the room is ‘perfect’ and the shelves aren’t any more dangerous than when children sleep in bunk beds.

One person wrote: ‘Well done! It’s a beautiful space, he looks happy and that’s honestly what matters. You’ve done brilliantly with what you have, you should be proud of your effort. Ignore all the negative comments, good on you for putting so much effort in and having a great idea’

‘Whoever whined about the shelf, it’s no different to having bunk beds and kids adapt. Back in my day some kids had drawers as beds or they were top and toed. He’s a very lucky little man. You’ve done an awesome job,’ said another.

A third added: ‘I was going to say the same about sleeping in the drawer. This looks perfect as you have to make the most of what you have at the time, looks lovely’.

‘What a great idea and look of such joy and happiness on his wee face is absolutely heart melting. Well done mum,’ said another.

Sofie revealed she was able to achieve the renovation for just £125 because many of the items were gifted by others.

Speaking to The Sun, she added: ‘The carpet was brand new/second hand from mums old house and me and mum painted the bedroom with some blue Dulux we found on Poundshop online’ 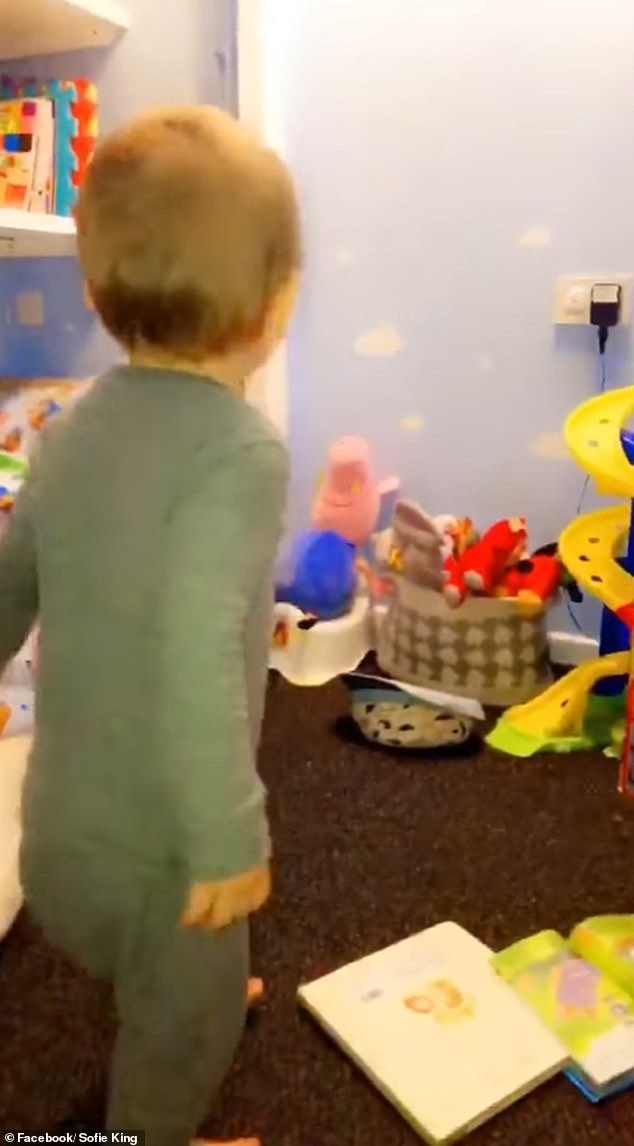 Sofie revealed the carpet for the room was from her mum and she bought some budget paint from the Poundshop online. Pictured: Sofie’s son