A woman who is posing as an anti-vaxxer as part of a social experiment gets a lesson in science from frustrated restaurant patrons who overheard her telling her teenage son he can’t get vaccinated because she thinks it is a ‘government conspiracy.’

On Tuesday night’s episode of the ABC series What Would You Do?, a teen actor is sitting down in a crowded restaurant while loudly pleading with his mother to let him get vaccinated, something she is openly against.

A number of patrons who were seated close by start arguing with the mother’s belief that vaccines aren’t safe, insisting that she is putting her son at risk by not letting him get them. 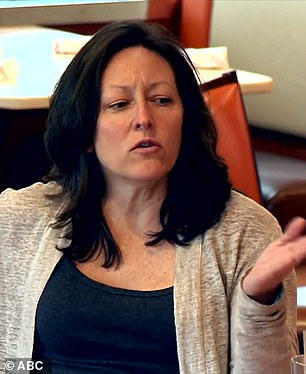 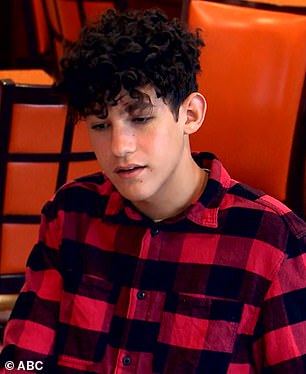 Debate: An actress and a teen playing her son pretend to argue about vaccines in a crowded restaurant on Tuesday’s episode of the ABC series What Would You Do? 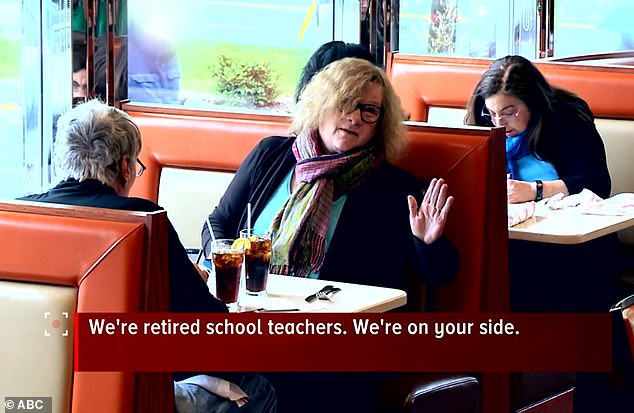 Support: The teen loudly states that he wants to get vaccinated, but his mother won’t allow it. When the mom walks away, a woman leans over and tells him that hey are on his side

In a preview clip from the episode, the mother and son are openly arguing about whether he should get vaccinated.

‘I’m nervous because you don’t know what they’re giving you, and I don’t trust it,’ the mom says, prompting one woman nearby to swivel her head in their direction.

When the actress walks away, the stranger tells the teen that she and her dining companion are both retired school teachers.

‘We’re on your side — and we’re staying out of the issue,’ she says, but she has a hard time turning away.

The teen asks for their thoughts, and she notes that she has never seen ‘a kid have a bad reaction to a vaccine.’ 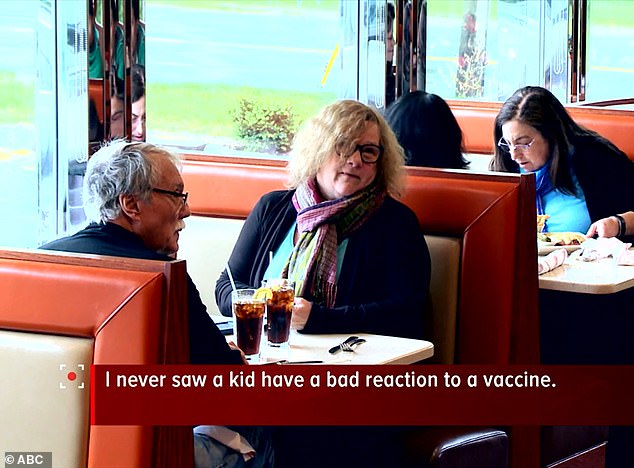 Just saying: She explains that she and her companion are both retired teachers, and she has never seen ‘a kid have a bad reaction to a vaccine’ 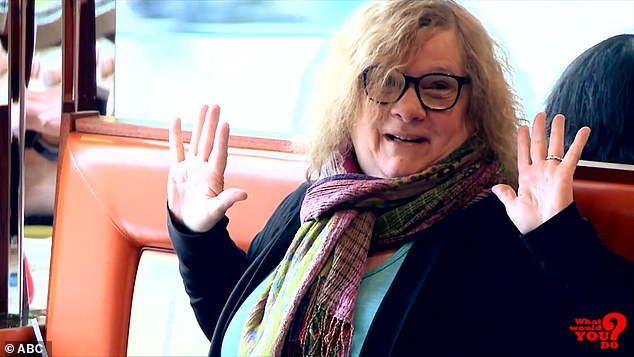 Hard to ignore: While the woman insists she is going to stay out of it, she can’t resist telling the mom to look at the science when deciding whether or not to vaccinate her son

‘You may be able to find somebody at a clinic or something,’ she says, making an injection motion with her hand.

‘You said you weren’t getting into this,’ her companion reminds her.

‘I’m not getting into this,’ she agree, backing off, but when the mom comes back, the teen is quick to tell her that the people sitting next to them were both vaccinated.

‘Excuse me? You agreed with vaccinating?’ the mom asks. ‘I just feel the whole vaccine thing is a government conspiracy.’

The woman across from them shakes her head, while the man stresses how important vaccines are for longevity. 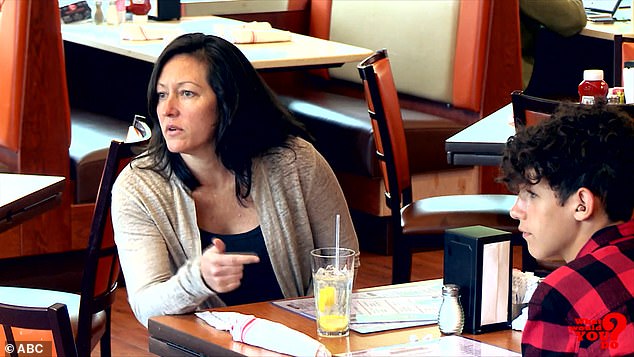 For real? ‘I just feel the whole vaccine thing is a government conspiracy,’ the mom says, eliciting a few stunned reactions from patrons 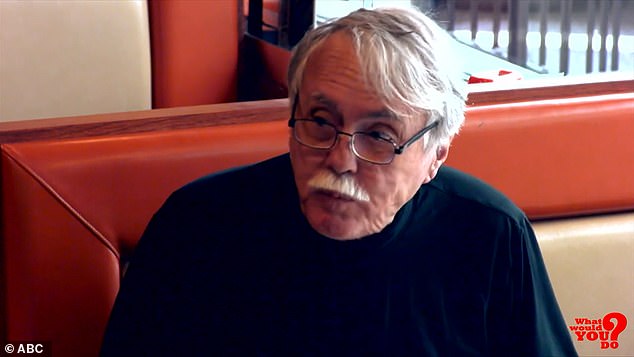 Evidence: ‘I grew up in the time when polio was rampant in the country, and then the polio vaccine came out,’ one man recalls. ‘It wiped out polio’

‘I probably wouldn’t have made it to 77 if I didn’t have some vaccinations,’ he says.

‘I think you need to look at the science,’ the woman adds.

At this point, host John Quiñones walks out to let them know that they’ve been had, and they explain why they felt the need to butt in.

‘I grew up in the time when polio was rampant in the country, and then the polio vaccine came out,’ the man recalls. ‘It wiped out polio.’

In another preview clip featuring a new set of diners, the teen tells his mother that he has ‘educated’ himself about vaccines and doesn’t ‘feel safe’ being unvaccinated. 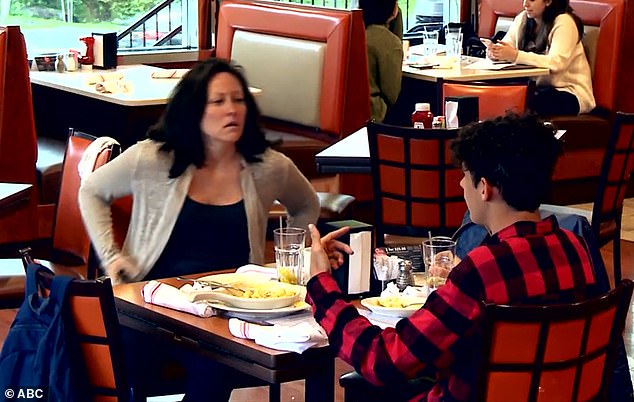 Social experiment: The two get into the same argument in front of a different group of patrons to see how they would react 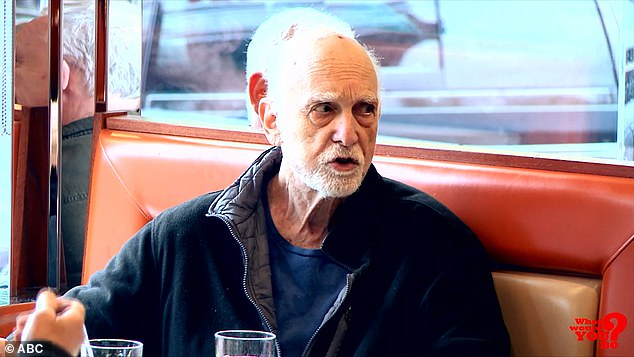 Facts: These diners are even more vocal than the ones before, and one man assures the mom that ‘the science shows these vaccines do not cause autism’

‘You’re putting my life in danger,’ he says, once again catching the attention of the people next to him.

When his mother walks away for the second time, he tells a woman next to them that his mother is being unreasonable.

‘You should take care of what you need to do,’ another patron advises him.

The teen asks them to talk some sense into her mother as soon as she comes back, and this group is even more willing to get into it with a stranger than the last.

‘The science shows these vaccinations do not cause autism,’ one man tells her. ‘The numbers prove it. 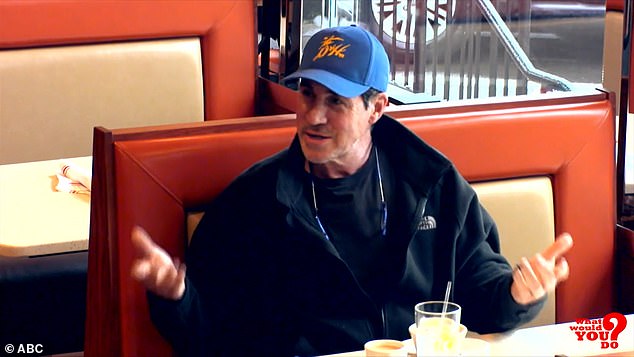 Argument: Another stresses that she is ‘doing something that is knowingly going to leave [her son] vulnerable to becoming sick’ 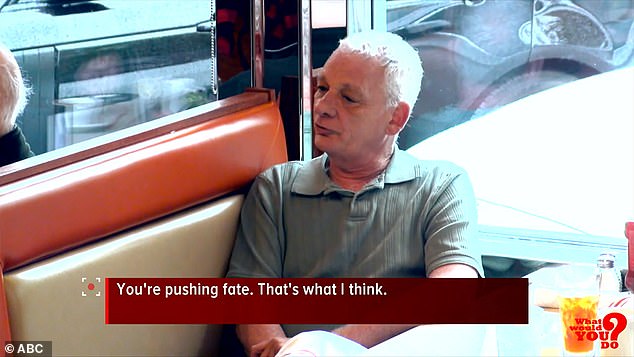 Think about it: One man who had the measles as a child insists that she is ‘pushing fate’ 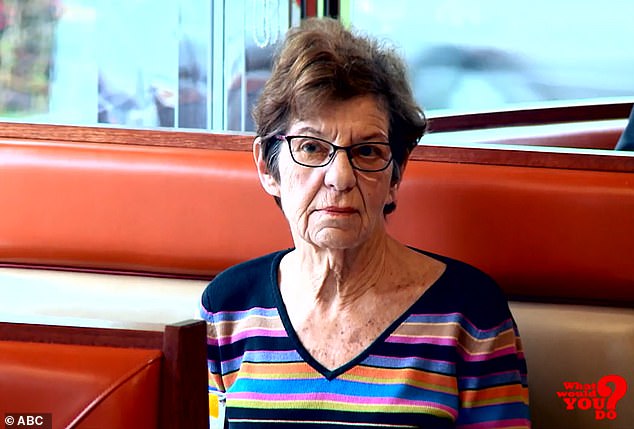 ‘Yeah, but I don’t know what they’re putting in his body,’ she responds, prompting another diner to point out that she doesn’t know what half of the things are in the food that she is eating.

He stresses that she is  ‘doing something that is knowingly going to leave [her son] vulnerable to becoming sick.’

‘You’re pushing fate. That’s what I think,’ someone else adds.

When Quiñones comes out this time, two patrons recall how decades ago they had measles, a highly contagious infectious disease that is now easily preventable by a vaccine.

‘I had measles when I was a kid and then my mother got it, and she almost died from it,’ one woman shares. ‘It was terrible.’

‘Every parent has the obligation to protect the child. I had it when I was a kid,’ her partner adds. ‘I wouldn’t want that on any kid. Vaccinations should be the norm here. We got outbreaks right now, right? And that’s scary.’