We’re all busy and sometimes when we’re eating on the go we’ll pop into a petrol station for some food – but most of us would’t dream of shopping in them for a week.

Anna Riley, a local reporter from Hull, wanted to see if it was possible to eat well and not spend a fortune living off petrol station food for the week.

However, her fears about the expense and unhealthy options were far worse than she’d expected. She claims that she spent around £50 a day on breakfast, lunch and dinner every day.

While options for healthy foods were a random pack of carrots – and most meals that she came across were carb heavy. 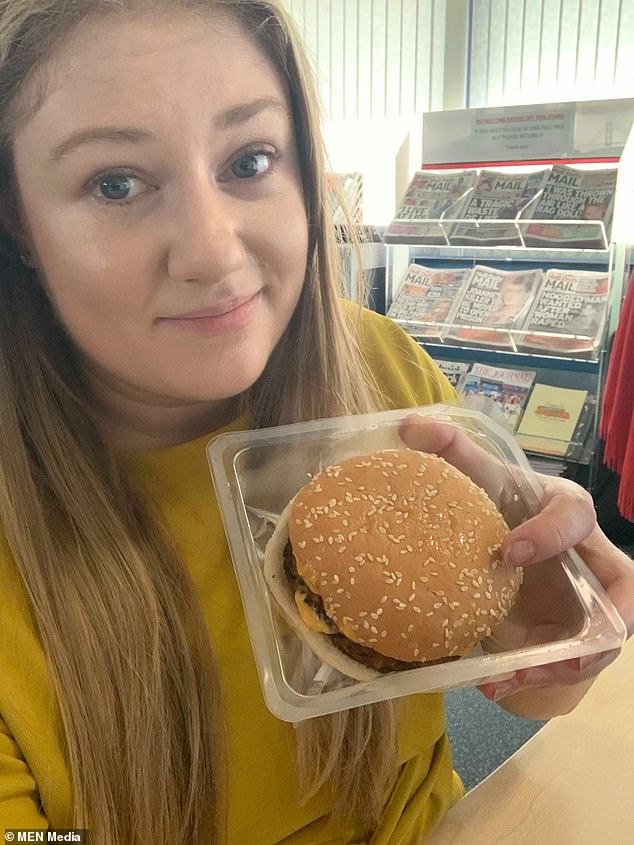 Anna Riley, pictured, from Hull, tried to live off petrol station stores’ food for five days to see if it was possible to find healthy options without breaking the bank. Pictured holding a staple petrol station burger 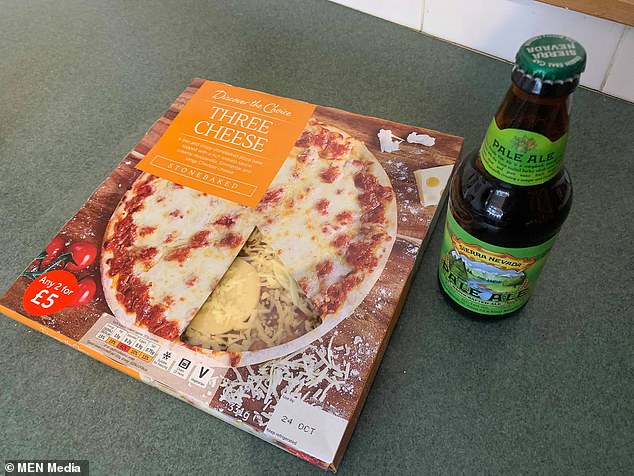 On Monday, Anna ate a margarita pizza for dinner, and accompanied it with a beer. She said she could not complain, but felt the option was unhealthy 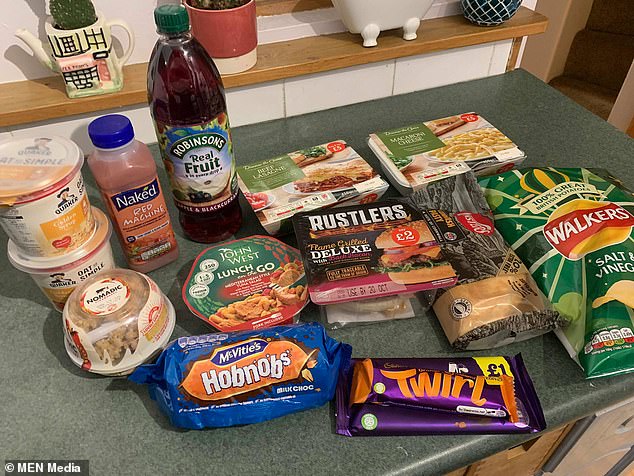 Some of Anna’s buys for the week. She explained she could not meal-plan, due to the absence of fresh food

Anna said she was bewildered by the amount of money she spent during her experiment.

‘I pretty much expected that I would be shelling out more money for the food sold at a petrol station compared to buying at a supermarket, but I didn’t expect it to be so much more,’ she said.

‘I did try and do a bit of bulk shopping and meal planning so that I wasn’t having to go to my chosen petrol station of Jet in Beverley Road every day,’ she added.

‘I didn’t realise initially how much my spending was adding up and the odd bit of impulse buying, as well as trying to eat as healthily as possible, racked up the bill,’ she said. 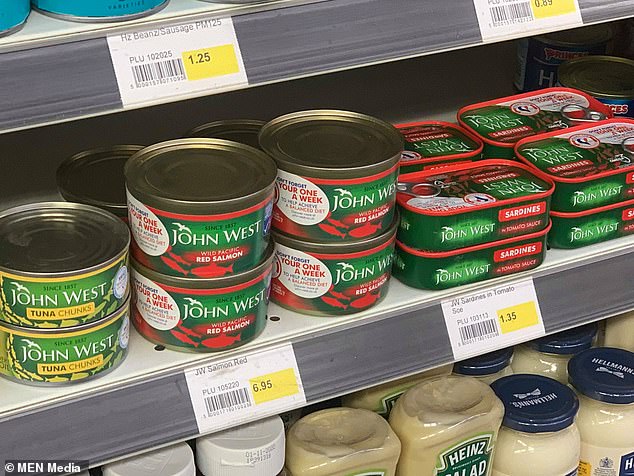 Anna was shocked to find that a simple can of red tuna from John West cost £6.95 in the petrol station (pictured) 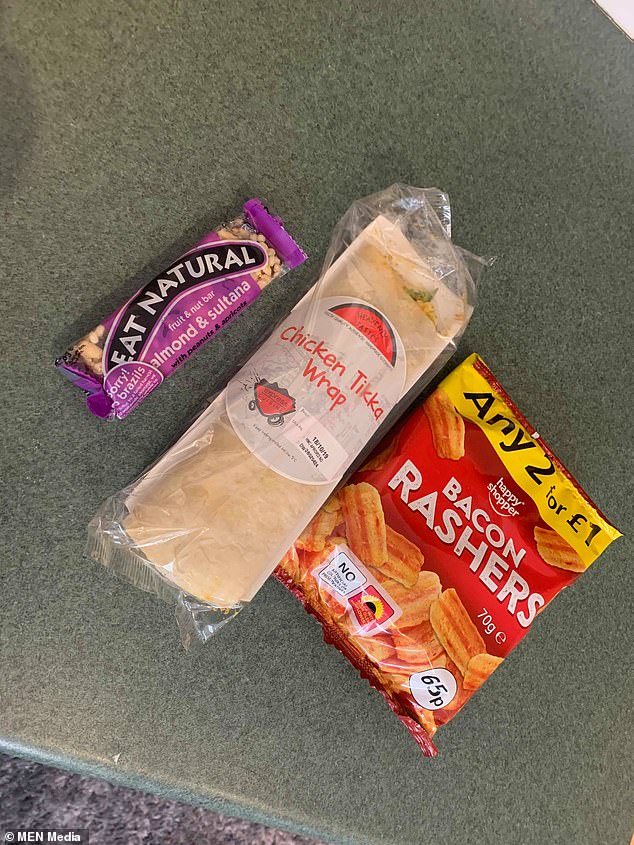 On Wednesday, Anna had a chicken tikka wrap with bacon rashers and a Eat Natural fruit and nut bar 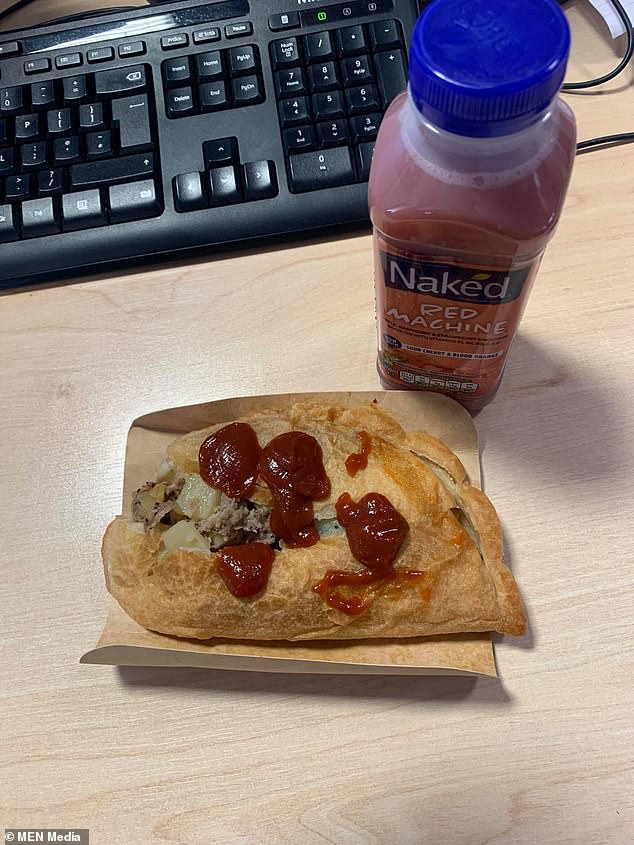 On Thursday, Anna had a pastry with ketchup (pictured) and a fruit juice, but said she shouldn’t have put it in the microwave

She added some of the prices in the Hull store were ‘shocking.’

‘Take a single tin of John West red salmon,’ she said, ‘it was actually priced at an eye-watering £6.95.’

‘My favourite biscuits – chocolate hobnobs – were selling at £2.99 and smoothies were priced up at £3.55,’ she added.

The sandwich meal deals, including a drink and chocolate bar or crisps, were £4.95 and there wasn’t much choice for the cost either. She also pointed out sandwiches prices were not reduced at the end of the day when they were going out of date.

Anna added that the garage she shopped at wasn’t equipped for consumers shopping in bulk.

‘As the customers who normally frequent the garage just pop in for a couple of bits, there wasn’t a basket in sight for me to put any of my goods in when I was trying to bulk buy,’ she said. 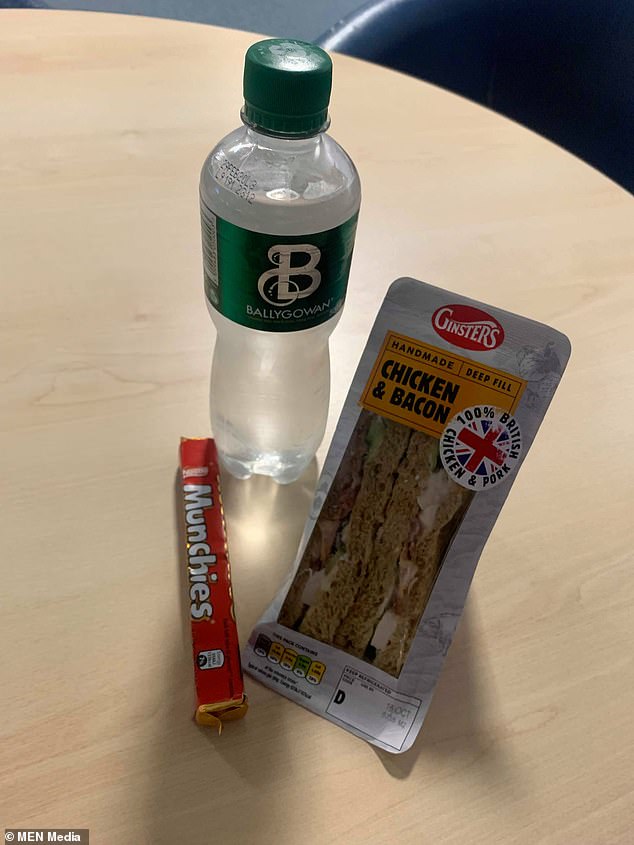 On Tuesday, Anna had a chicken and bacon sandwich for breakfast, with a bottle of sparkling water and a munchies she saved as a snack (pictured) 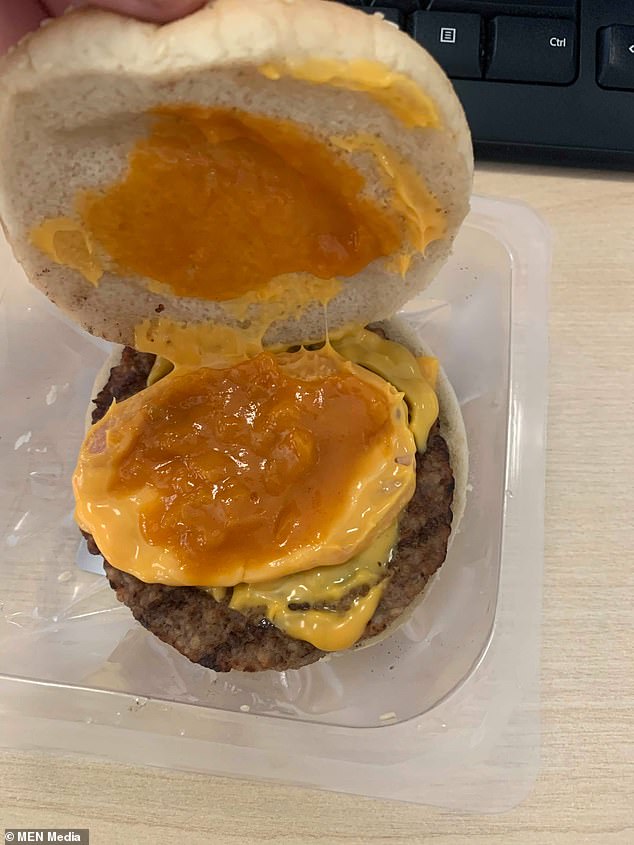 Anna was not thrilled at the idea of eating of the petrol store’s staples: a microwavable burger (pictured)

‘I had my arms overflowing with items, having to go over to the till and dump them on the side before going around again to select a couple more bits,’ she recalled.

Anna said she was also annoyed by the lack of healthy options in the store.

‘The only thing that would be remotely good for me was a random bag of carrots nestled next to the sandwiches,’ she said.

‘Instead, I tried to avoid as many snacks as possible and just stick to food that seemed full of the least junk, but it was a fool’s errand,’ she added.

‘It was carb central with pasties, pies and pizza on offer and I was definitely a salad dodger for the week.

She said the only healthy option of her week – a frozen chicken dinner – tasted like plane food.

‘I was forced to buy a smoothie to try and get in a couple of my five a day and I was most displeased at the price it set me back for the pleasure,’ she added.

Anna kept a dairy of what she ate for the five days and reveals it to FEMAIL:

Dinner – Margarita pizza and a beer

On Monday, Anna’s experiment started with a type of breakfast she would ‘eat anyway.’

She had a John West Mediterranean salad for lunch and a margarita pizza for dinner.

She also bought a pack of bacon frazzles and a beer.

She noted the tuna salad she had for breakfast’s sell by date was June 2022, which tipped her off it wasn’t freshly made.

‘I couldn’t complain about the margarita pizza or bacon frazzles though, as unhealthy as were,’ she said.

‘For lunch I went for the meal deal option, but there was hardly much of a sandwich selection to choose from and all of the boxes they were in looked a little worse for wear, beaten around the edges with withered lettuce peeking out of the bread,

‘For tea, I had a microwave lasagna and I couldn’t complain about that either and the orange twirl was a delight. I recommend anyone to try one,’ she added.

She started Wednesday with a granola and yoghurt mix, which she said was a poor start to the day, as it was packed with sugar and insipid.

Talking about the wrap for lunch she said: ‘I actually really enjoyed my wrap as it had a nice amount of spice to it and contained actual salad,’ she said.

‘The macaroni cheese was just a standard microwave pasta dish, which as always would have tasted better if I made it from scratch,’ she added.

On Thursday, Anna had the same porridge as Monday and Tuesday.

‘For lunch I went for a Ginsters Cornish pasty, which actually tasted better than I expected with a couple of dollops of ketchup that I pinched off a colleague,’ she said.

‘But heating it up in the microwave was my downfall as it made the pastry really soggy and split apart,’ she admitted.

‘So even though the filling tasted alright, the outer crust didn’t.’

She had a Bisto roast chicken for dinner and said it was the best meal of her week.

She did, however, pointed out it took her 12 minutes to heat the dinner in her offices’ microwave. 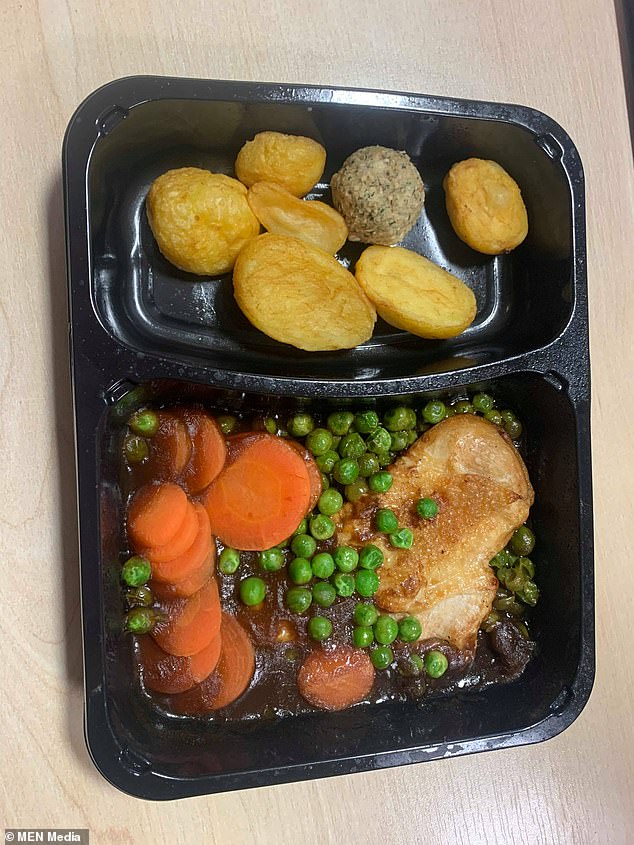 ‘When I got it out of the packaging, it looked like airline food and it also tasted like it upon consumption.

‘It certainly wasn’t a carvery raost, but I think it was actually my favourite meal of the week because it had something in it that tasted like real meat and a bit of veg, although the stuffing ball nearly broke my teeth when I bit in to it,’ she added.

Lunch – Rustlers bacon and beef burger with cheese and relish

For her Friday lunch, Anna tried the Rustlers bacon and beef burger with cheese and relish

‘I really wasn’t looking forward to the Rustlers burger but it is a classic staple of petrol station food so I had to try it didn’t I,’ she said.

‘I foolishly put the full burger in the microwave including the bread, which crated a soggy bread bun that then turned rather hard,’ she added.

She said the burger made her feel ‘queasy.’

Reflecting on her week, Anna said she didn’t have to do any washing up, but added that the items’ packaging couldn’t be good for the environment.

She also went on to admit that her lunches and dinner options were not meals she would have naturally picked. 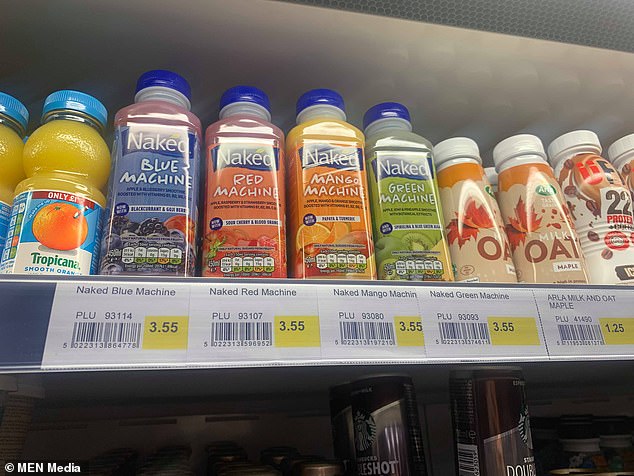 Juices in the shop cost much more than in other supermarkets with fruit juices priced at £3.55 (pictured) 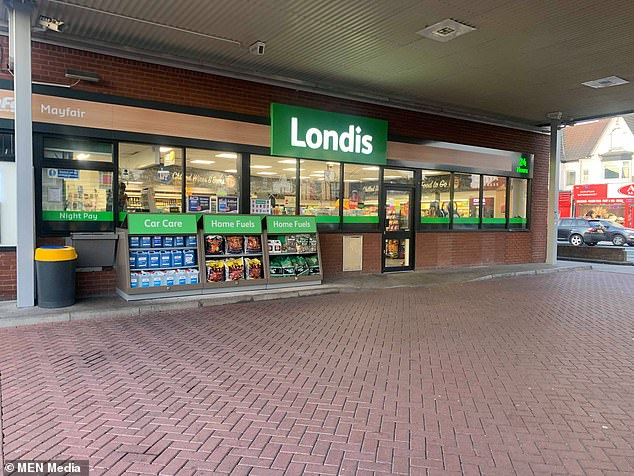 Anna shopped at her local Londis during the week and spent about £53 per day for her breakfast, lunch and dinner

‘Even though I may have a pizza now and again, I normally always make my evening meal and never have ready meals, so that wasn’t something that I was used to,’ she explained.

‘I’m not the biggest fan of cooking, but I did actually miss making a hot meal cooked from scratch with natural ingredients and yearned for a supermarket shop with more options and cheaper prices,’ she added.

She said she felt bloated and ‘a bit yucky’ by the end of her experiment.  ‘I didn’t eat as nearly many vegetables as I normally would and no fruit as there was no access to any, unless my smoothie counted,’ she added.

‘Coeliacs or vegans would struggle eating out of this petrol station for a week due to lack of choice,’ she added.

Anna also said she could not meal-plan due to the lack of fresh fruit and veg in the store.

‘Overall, it was an interesting experiment but I’ll be sticking to Lidl and Aldi for the sake of my bank balance, waist line and health in general,’ she said. 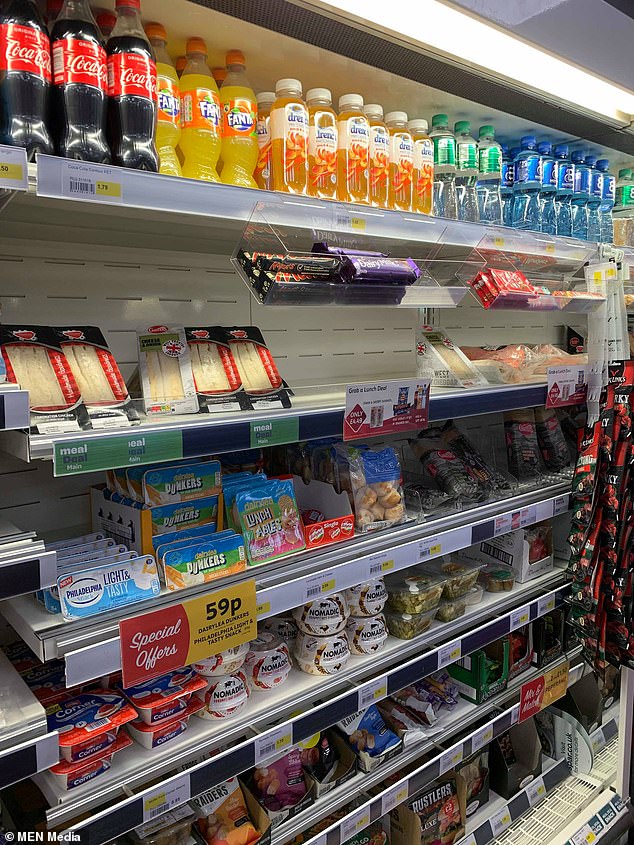 The young woman said the sandwiches selection was poor. even though they were more expensive than in other supermarkets 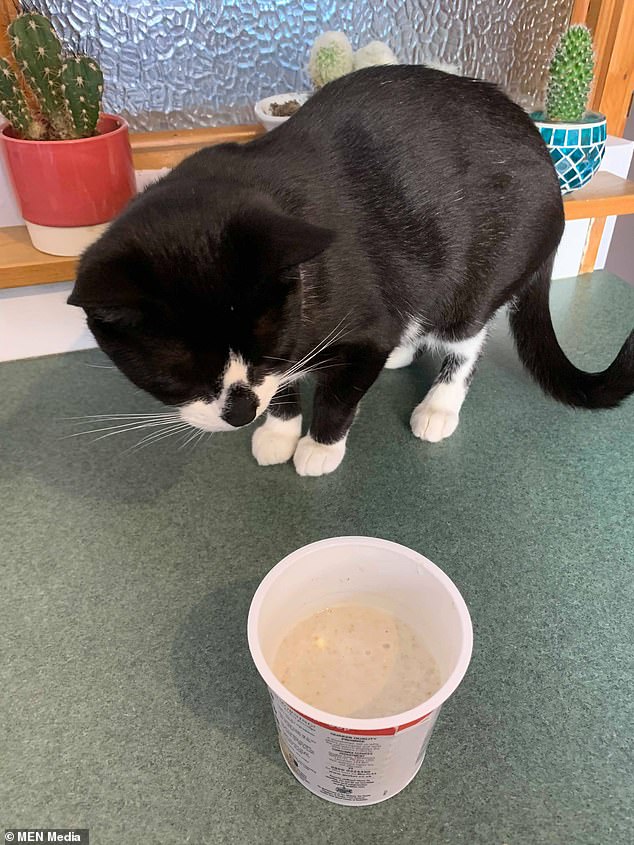 Anna’s cat looking suspiciously at her porridge. The young woman had porridge three days out of five 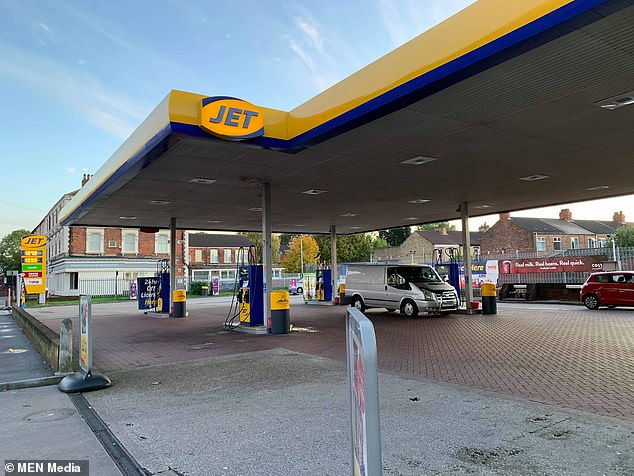 At the end of the experiment, Anna said she would go back to normal supermarket to spare her health and bank account