A woman has demonstrated just how easy it is for someone to sneak drugs into your drink, even when it is right in front of you, in a bid to raise awareness about keeping your beverages safe on a night out.

Mell Hall from Toronto, recently uploaded a video on her TikTok page in which she explains why holding coaster above a glass is one of the more effective ways to protect your drinks when you’re at a club.

However, users lashed out at her, calling the safety measure ‘unnecessary’ – so, Mell decided to film another clip showing how easy it is to drug a drink.

Mell recreated various scenarios that attackers could stage at a club, using a glass of water on her kitchen table and corn kernels as the ‘drug’.

Mell dropped the corn kernel into the glass unnoticed in five different ways, including adding one while extending her hand for a handshake, and handing over cash to pay for a drink. 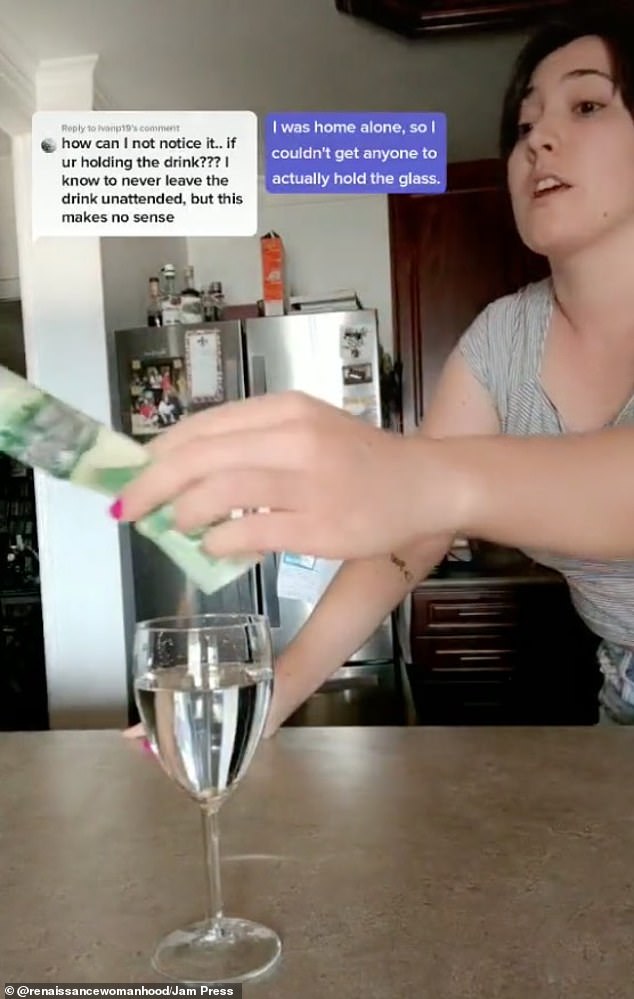 The video has since gone viral on TikTok, gaining over 1.6 million views leaving users shocked at how she ‘drugged’ the drink in the blink of an eye.

One user commented: ‘I had to watch it twice because I DIDN’T NOTICE THE FIRST TIME’

Another added: ‘Jesus I didn’t even notice you dropping things in the first time I watched the video which is EXACTLY THE POINT IVAN’

Meanwhile, one wrote: ‘That’s actually so terrifying. I had no idea what you were doing until you held up the glass kernels. It’s really that easy. Wow.’

Mell slipped a corn kernel into the glass while extending her hand to shake and making gestures during an imagined conversation. 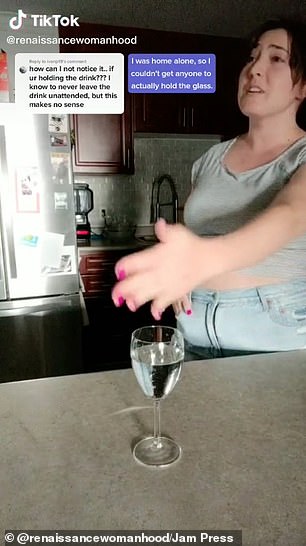 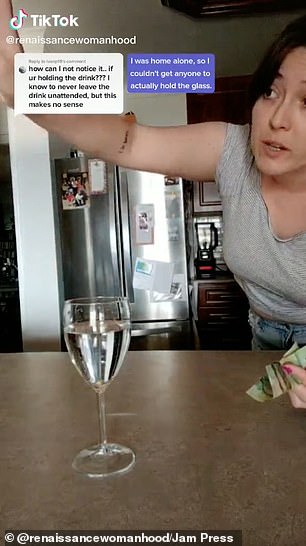 She then showed herself dropping several piece of corn, which represents a date rape drug, into the glass whilst shaking a hand and ordering a drink 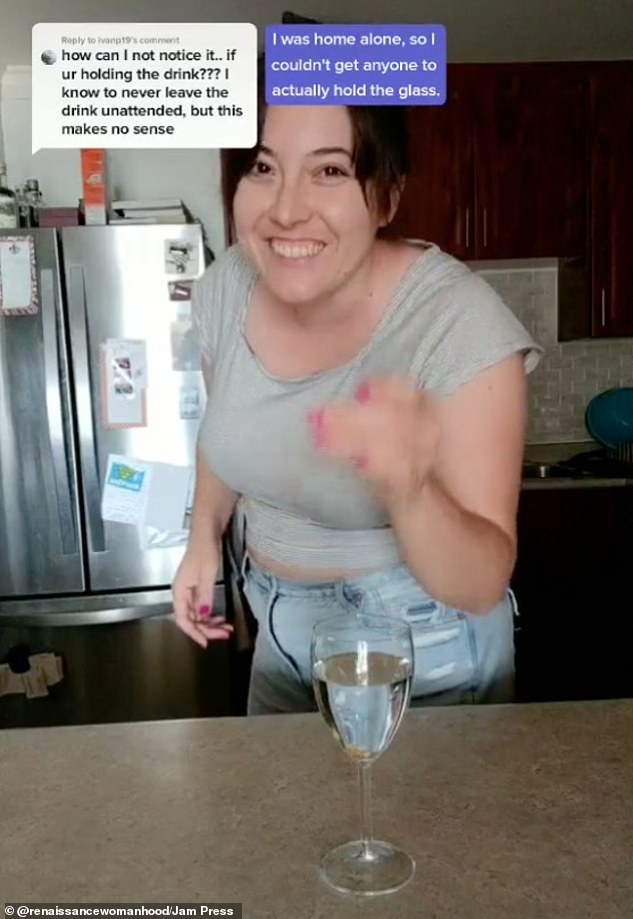 She also showed how easy it is to drop a pill in a glass while handing money to a bartender, and pretended to bump into the table and slipped a pill while apologizing.

Another trick was to drop one into the drink while picking up her own drink in the adjacent glass.

Speaking about the video, Mell said: ‘I made it in response to a comment on another one of my videos.

‘I had been talking about how coasters are a simple and effective way to protect your drink.

‘There had been some comments from people who felt this was paranoid or unnecessary. The comment I decided to respond to was about whether or not a drink being spiked while you’re holding it is actually noticeable.

‘I decided the best way to respond and explain the risk was with a video.

‘I thought a visual would be more impactful. So, I searched my kitchen for something pill-sized, which were popcorn kernels, and I got to work. It was a spontaneous thing.

‘I never expected it to go viral!

‘I did the whole video in 15 to 20 minutes. When I decided to use popcorn kernels, I practised palming them for a minute or two before filming. 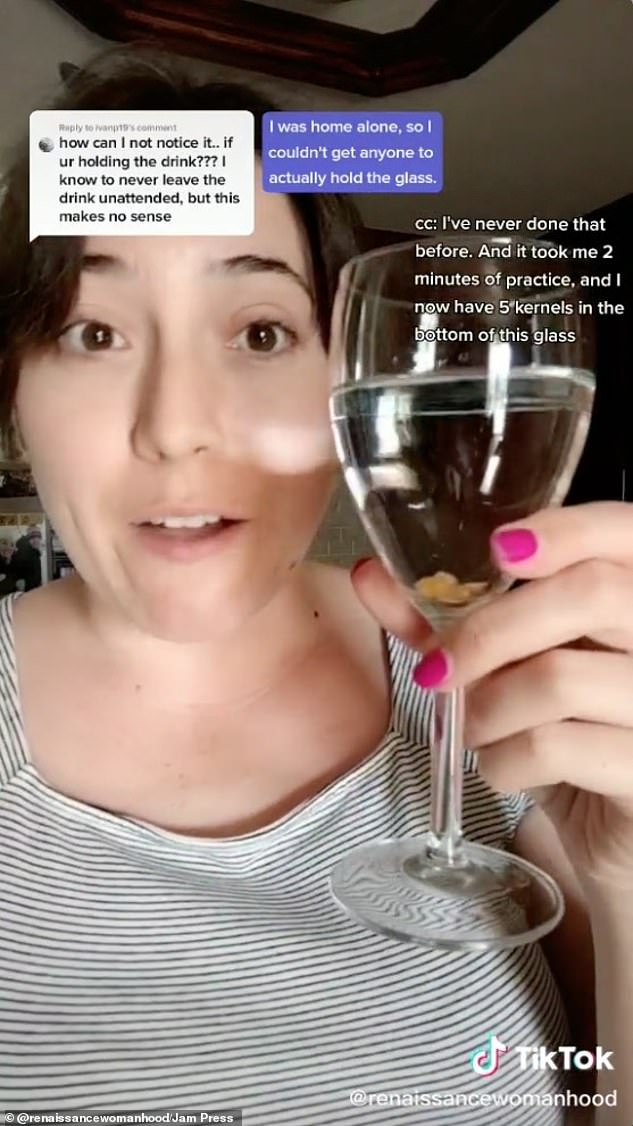 Mel hopes the video will make people more aware of the dangers they face, with many of her viewers previously doubting the need for protecting your drinks when you’re at a club

‘I think I did three or four takes of each shot to make sure that I didn’t miss the glass and the camera angle was good.

‘It was eye-opening. I hadn’t expected it to be so easy. I knew that people could drop something in quickly and discreetly, but I thought it would take a lot more practice to do it myself.’ 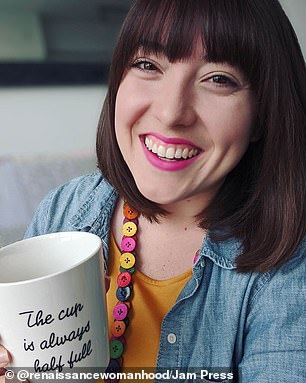 Mell encouraged people to be vigilant and cover their glasses with a drink cover or napkin to ensure they stay safe, and also to have trusted friends around you, just in case.

She said: ‘My intention when I made this video wasn’t to scare people into never going out. I know from the comments that fear is a lot of peoples’ first reaction to seeing this.

‘I would have been happy if just one person would have walked away from watching this video and decided to be more vigilant and build safer habits for themselves.

‘To my surprise, it looks like millions of people are going to re-evaluate how they protect themselves and those around them!

‘People have been so generous in the comments and have jumped in to give personal anecdotes and share how they keep themselves safer when they go out.

‘We’ve talked about covering your drink with your hand, covering it with a coaster, using a silicone or fabric drink cover, poking your straw through a napkin and securing the napkin to the glass with your hair elastic, nail polishes that change color when they come into contact with a drug, drink testing kits, drug-detecting bracelets, ordering a bottle instead of a glass so that it’s a smaller target, and plenty more.

‘People have also talked about how it’s important to watch your bartender make your drink and to buy a new one if ever you put yours down or feel unsure.

‘With all of that said, I think allies are most important. The reality is that, if someone does manage to spike your drink, your awareness has been taken away from you.

‘You’re now relying on the people around you to recognize that something is wrong and to help. That’s why we must be looking out for others as much as ourselves.

‘So, if your friend is acting weird or if you see something suspicious across the bar, check-in with them. Allies save lives.’