A woman whose hormone condition caused her to grow a beard has revealed how she decided to ditch shaving altogether – and says it’s the best thing she has ever done.

Alma Torres, 27, who lives in The Bronx, New York, developed polycystic ovary syndrome (PCOS) at the age of 15, causing her to grow excess facial hair.

But after eight years of shaving, waxing and bleaching, she decided to grow a full beard.

Alma ditched her razors four years ago to embrace her natural beard – and she’s now using her story to inspire others. 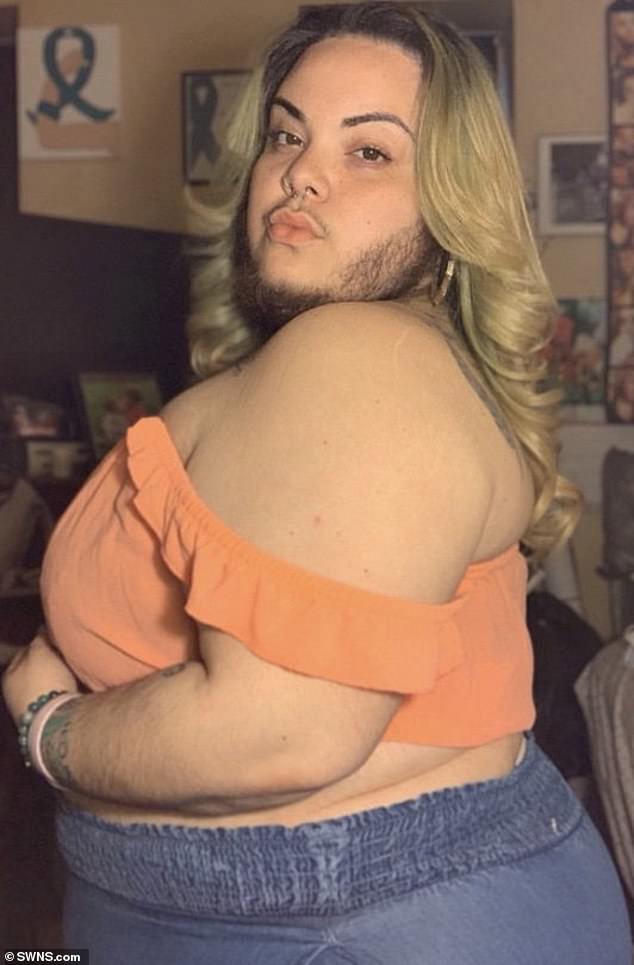 Alma Torres (pictured), 27, who lives in The Bronx, New York, developed Polycystic Ovary Syndrome (PCOS) at the age of 15, causing her to grows excess facial hair 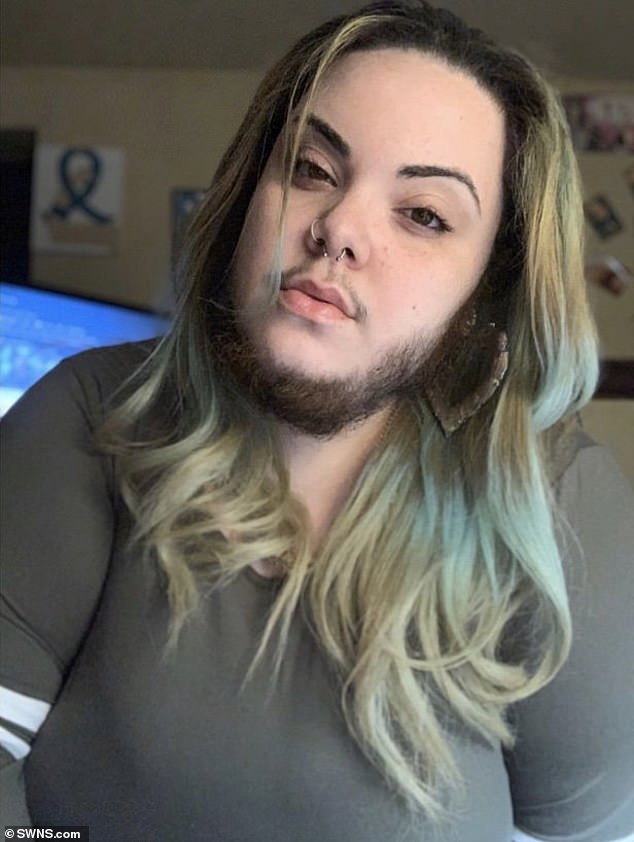 While still a teenager, Alma found herself growing dark facial hair and shaved for the first time aged 16 after receiving negative comments from pupils in her class.

But she recently celebrated her four-year ‘beard-iversary’, the anniversary of the day she began to let it grow naturally.

She says now she has learnt to love her natural body, so negativity from other people does not affect her.

The full-time student, who is training in Manhattan to work in healthcare administration, said: ‘I learnt to embrace what I couldn’t change. That’s my favorite quote – it’s the one I live by.’

Alma recalled first growing dark facial hair aged 15, when she developed PCOS – although her diagnosis didn’t come until she had a blood test aged 18. 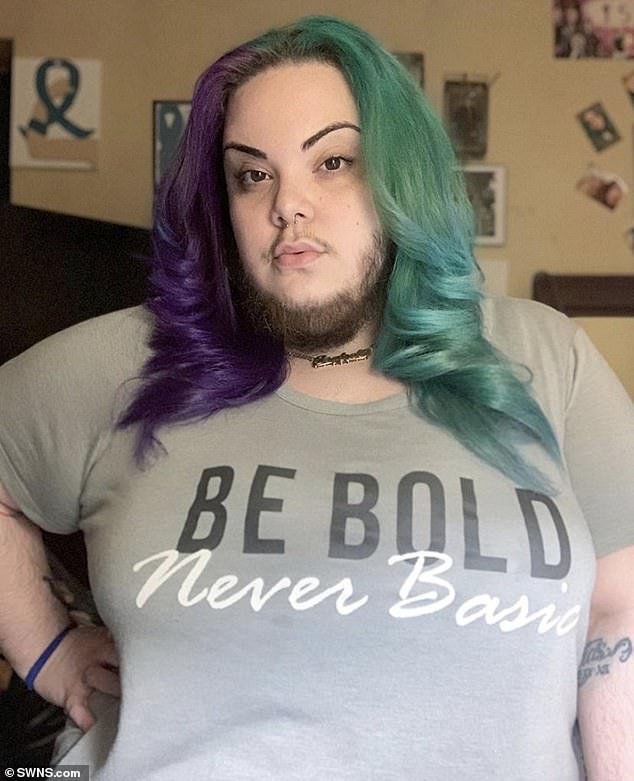 After eight years of shaving, waxing and bleaching, Alma (pictured) told how she decided to embrace what she ‘can’t change’

PCOS is a hormone condition which affects how the ovaries work. Common symptoms include irregular periods, weight gain, and excess hair growth – and it can also lead to infertility.

WHAT IS POLYCYSTIC OVARY SYNDROME?

Polycystic ovary syndrome (PCOS) is a very common condition that affects how a woman’s ovaries work.

There are no exact figures but as many as one in 10 women of childbearing age are thought to have the condition.

It’s a hormonal disorder which causes the ovaries to become enlarged and to develop numerous small cysts on the outer edges.

Symptoms of PCOS include:

While the exact cause of PCOS isn’t known, it is thought to run in the family and be triggered by hormones. Insulin resistance, which is a precursor to diabetes and caused by a diet high in sugar, is thought to be a big cause.

There’s no cure for PCOS but many of the symptoms can be improved with lifestyle changes such as losing weight and eating a health, balanced diet.

‘I had never really noticed how people would make fun of my facial hair, until a guidance counsellor at school asked me if it bothered me – and suddenly I realized how many people would stare and whisper,’ Alma explained.

‘That changed everything for me. I shaved for the first time when I was 16, before my eighth-grade prom, and I continued to try to get rid of the hair for the next eight years.’

She explained that she tried everything – from shaving, to bleaching, waxing and even laser hair removal – but nothing could hide the dark hairs.

When she finally received her diagnosis of PCOS aged 18, she described it as ‘a real slap to the face’.

With symptoms such as ovary pain and irregular periods, the PCOS diagnosis caused Alma to become ‘very depressed’ for a time.

But eventually she learnt to accept her condition – including her beard.

‘When I was about 19, about a year after my diagnosis, I became an advocate for myself, because I had to,’ she said.

‘I really struggled to start with, and every time I would try to grow my beard out I would end up running to shave it off after a few days.’

However, as she did more research about the condition, she came across PCOS advocates on social media who helped her to embrace her own.

She found one particular social media star, Harnaam Kaur – who sports her own PCOS beard with pride to more than 150,000 followers – which Alma says was ‘a turning point’.

‘I saw Harnaam with a full beard and she wasn’t ashamed of it,’ she explained. ‘I remember thinking, “She doesn’t care – if she can do it, surely I can too!”

‘I had tried for so long to change how I looked, but I couldn’t,’ she explained. ‘I grew to believe that I’m meant to be this way, so I stopped trying to change it.’

‘At first, people would make cruel comments and it would really bring me down. I’d get very self-conscious when I would catch people taking pictures of me while they thought I wasn’t looking.

‘Now, I still get people taking pictures when I’m out and about, but it doesn’t bother me at all.

‘I just turn and stare at them so they know I can see what they’re doing, and that I don’t care what they think of me.’ 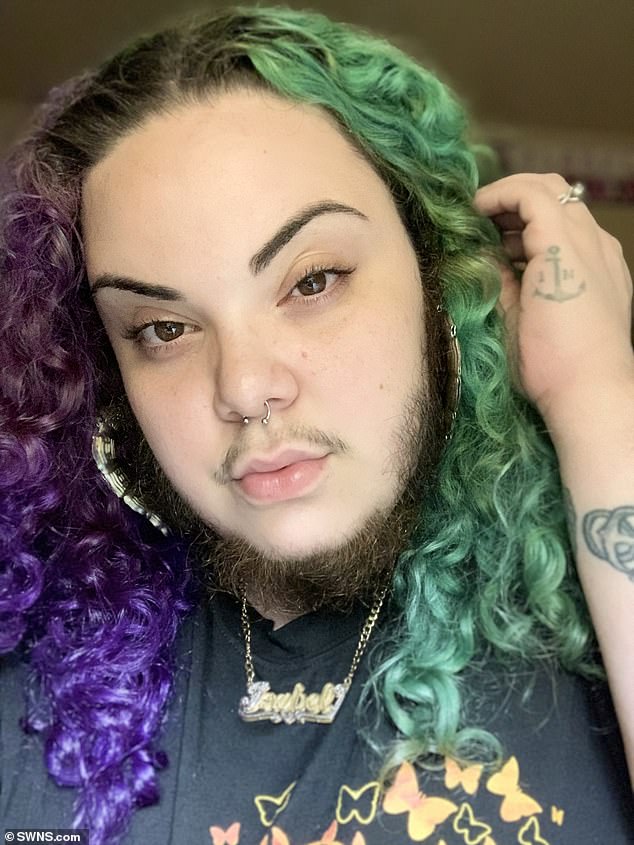 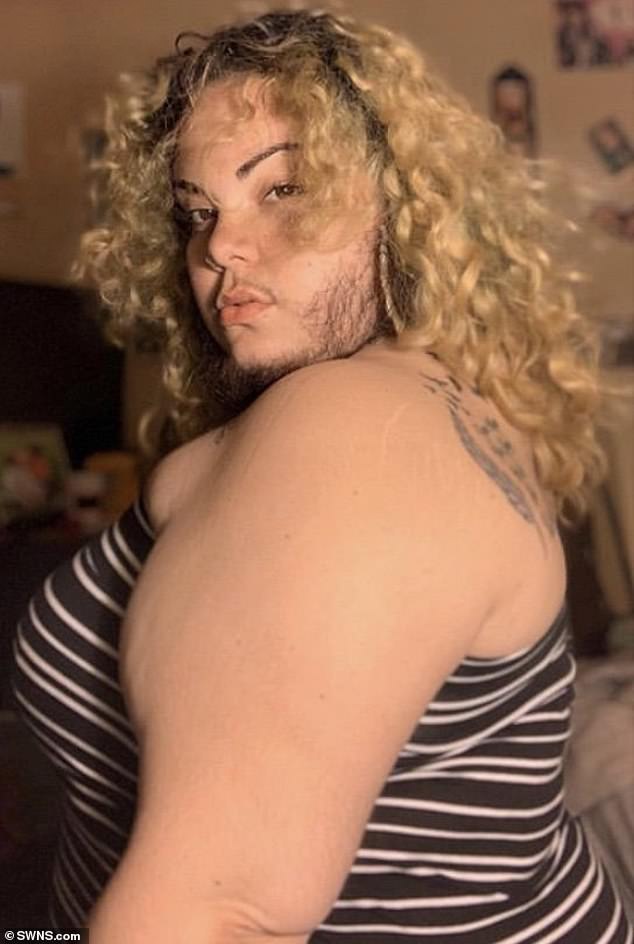 PCOS, Polycystic Ovary Syndrome, is a hormone condition which affects how the ovaries work. Pictured, Alma embracing her beard

Since 2017, she has also used Instagram to share her story to inspire and encourage others to accept themselves – and now with over 6,000 followers, she says the supportive messages she receives outweigh the negative ones.

‘Social media has allowed me to share my story and show people how I’ve embraced what I can’t change, which has pretty much become my mantra,’ she explained.

‘I get far more positive comments than negative, and I’ve also had a lot of women who struggle with PCOS themselves, who ask me for advice and tell me that seeing my Instagram helps them.

‘I just want to help people to understand that all our bodies are different, and you don’t need to change it – just learn to love yourself and accept it.

‘That confidence is not something you can build overnight, it took me years to get to this point! But you just have to take it one day at a time and believe in yourself.

‘Now, I’m more confident with my beard than I ever was without. Learning to accept my beard has been, without a doubt, the best thing I’ve ever done.’