With his sweet nature and even sweeter bakes, Great British Bake Off‘s Peter Sawkins won over the hearts of millions of fans before being crowned the 2020 champion in last night’s final.

The University of Edinburgh student, 20, became the show’s youngest ever winner – and first Scottish champion – when he beat Dave Friday and Laura Adlington by impressing the judges with his impeccable Cranachan Custard Slices, walnut whirls and a delightful Bonkers Bake Off Bubble Cake.

But there were no wild celebrations for Peter, who was dubbed the ‘baby-faced assassin’ thanks to his fresh-faced looks and killer skills in the kitchen.

Instead the avid badminton player, who is studying accounting and finance, watched the final alongside his university flatmates, marking the occasion with ‘a few beers’ and a dessert inspired by his winning showstopper.

Covid restrictions aside, everything we know about Peter suggests there wouldn’t have been a wild all-nighter, even if it had been allowed.

Raised in Edinburgh, Peter is the son of Professor John Sawkins, Deputy Principal of Learning and Teaching at the city’s Heriot-Watt University, and Morag Sawkins, thought to be the Postgraduate Finance Manager at the University of Edinburgh. 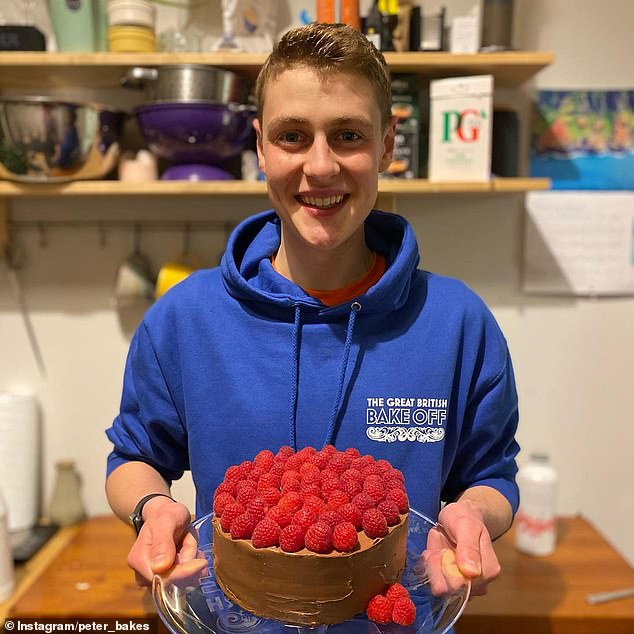 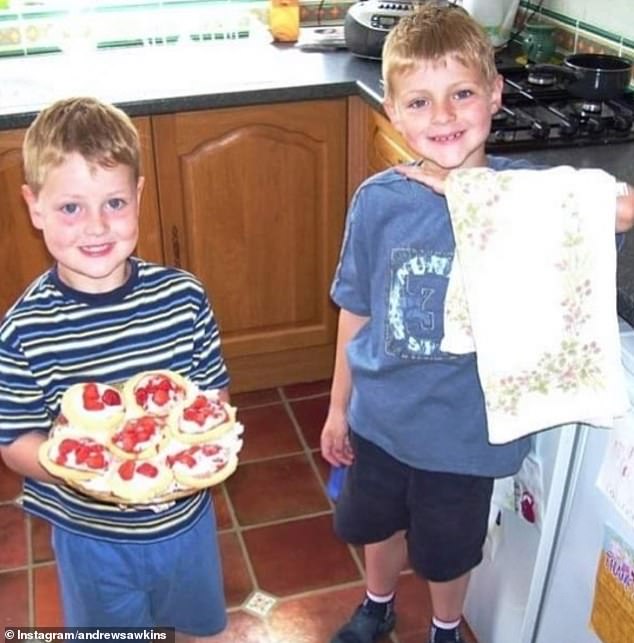 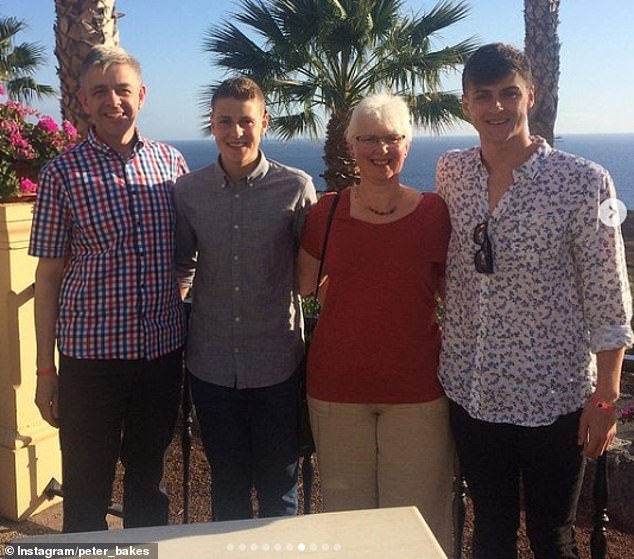 Close: Peter is the son of Professor John Sawkins, Deputy Principal of Learning and Teaching at the city’s Heriot-Watt University and Morag Sawkins, who is believed to be the Postgraduate Finance Manager at the University of Edinburgh. Pictured, Peter and Andrew with their parents

The couple married in Dundee in 1993 and celebrated their silver wedding anniversary two years ago with a replica of their original cake made by Peter. A sweet photo marking the milestone was shared in the church newsletter.

Peter’s older brother, Andrew, recently graduated from the University of Edinburgh with a degree in Mathematics and is now studying for an M.sC. in Pure Mathematics at University College London.

The family remain close and John and Morag fostered a love of baking from a young age. Childhood snaps show Peter and Andrew showing off a strawberry-topped dessert and helping to dollop cupcake mixture into cases laid out on the kitchen table.

Peter watched Great British Bake Off from the first series in 2010 and started baking ‘seriously’ when he was just 12 years old. He first applied for the show in 2018 (when he got a ‘few rounds’ into the applications process), before being given a place this year.

‘I’m now glad that I didn’t get on the show then,’ he told the Radio Times. ‘The extra time has made me better prepared – both as a baker and for being in the public eye.’

His newfound fame has been reflected on social media. His Instagram account ‘Peter Bakes’ jumped from 1,200 followers before the first episode to more than 100,000 today. 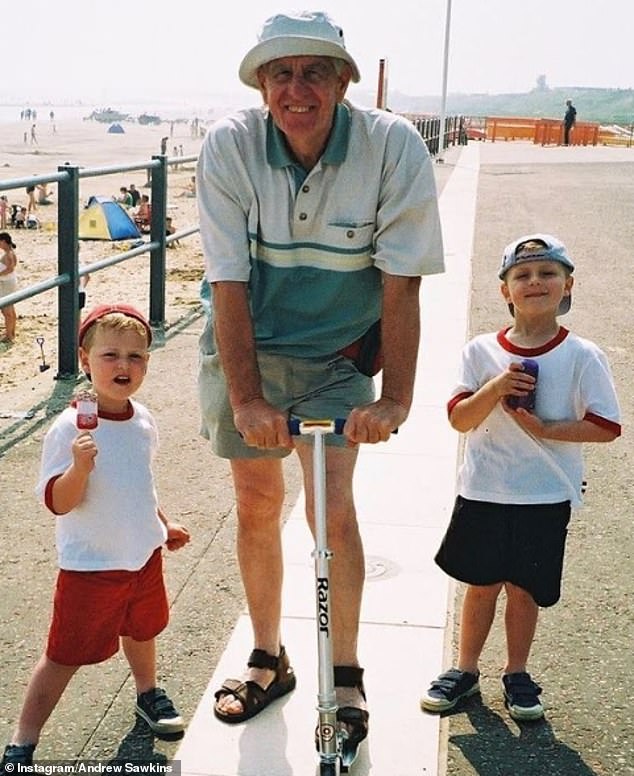 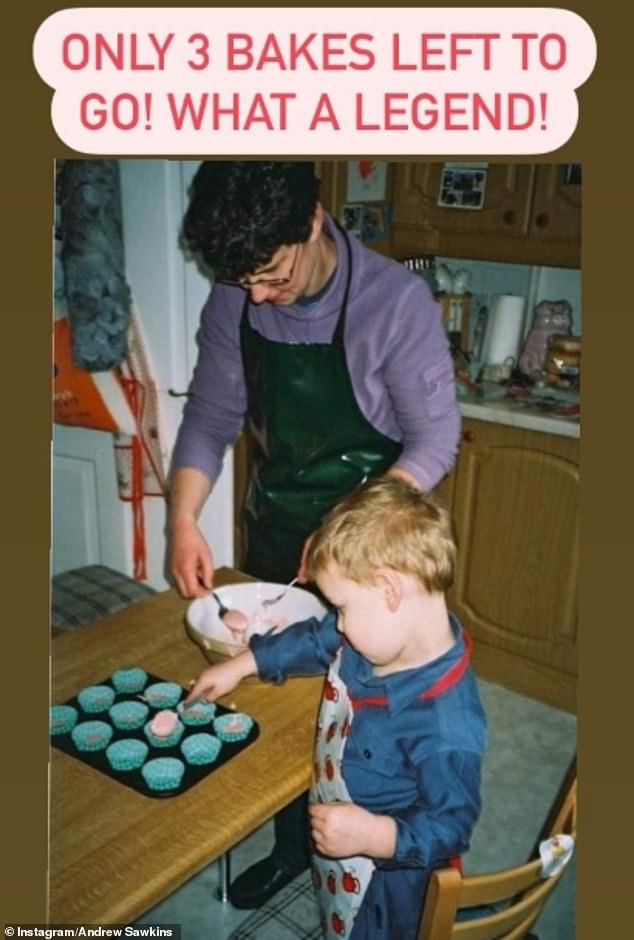 Number one fan: Ahead of the final, Andrew shared this adorable photo of Peter as a toddler

The account focuses less on his personal life and more on his past culinary triumphs, including a ‘Pomegranate Delice’, ‘(Not) Key Lime and Mango Pie’ and the playfully named ‘Bubbly Bertha’s Sourdough Rye’.

Many of the recipes he brought into the tent drew on his Scottish heritage with ingredients like oats, berries and honey, or were gluten-free, inspired by his brother Andrew’s own intolerance.

In turn, Andrew is his younger brother’s biggest fan. Taking to social media when the Great British Bake Off line-up was announced, Andrew posted: ‘BAKE OFF IS BACK!!! This might be the most exciting thing I’ve ever been able to post! My incredibly talented brohiem @peterbakes is going to be on THE GREAT BRITISH BAKE OFF He is an absolute legend so please show him some love and support!’

Ahead of last night’s final Andrew drummed up support for his sibling. Asking followers ‘are you going to be watching the finals?’

Once the winner was announced, he declared: ‘I am the proudest big brother in the world!’ 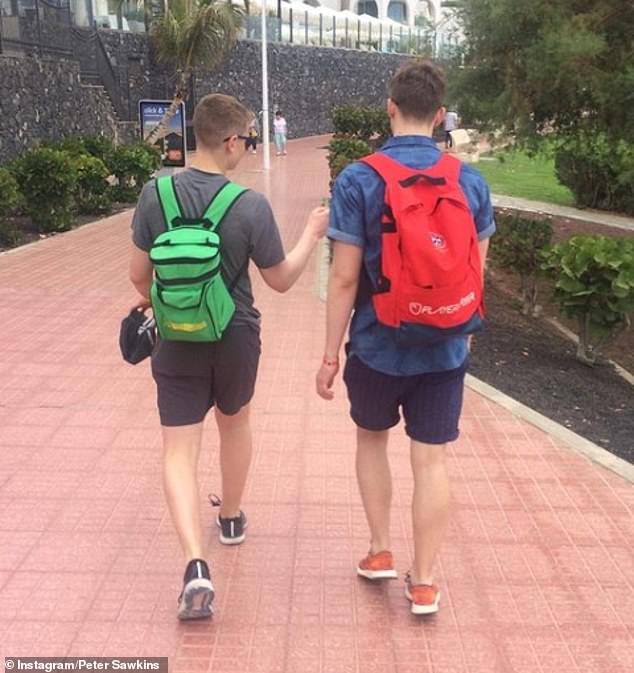 Close: Brothers Peter and Andrew on a family holiday to Tenerife two years ago 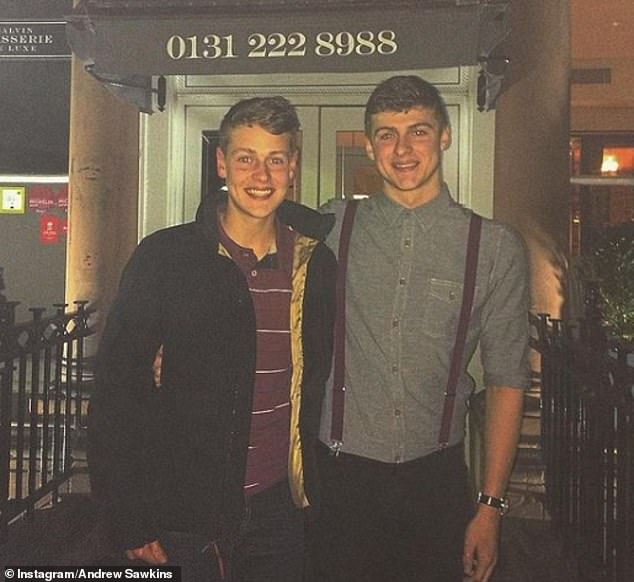 Fresh-faced: Andrew shared this photo on Instagram, taken a few years ago 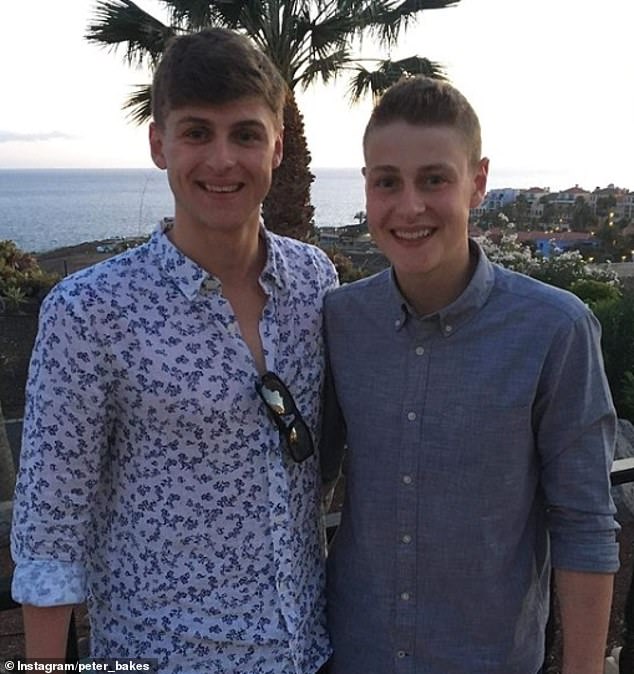 Summer sun: The brothers pose in a photo taken on a family holiday in 2018 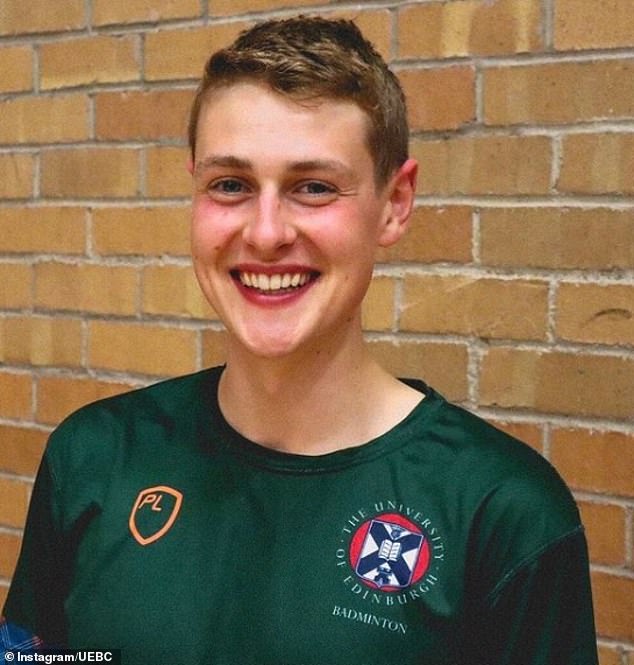 Celebration! The University of Edinburgh Badminton Club shared this photo after the win

Photos shared on his social media account show him and Peter playing in the pool on holiday, enjoying a round of golf, and tucking into ice cream cones on a trip to the seaside as children.

When he’s not busy baking, Peter enjoys playing badminton and is a member of the Edinburgh University Badminton Club.

The athletic flair runs in the family, with Morag, John, Andrew and Peter competing in a rely marathon last year and Andrew is a competitive swimmer.

However his focus remains on his university studies and Peter says he has no intention of dropping out early, even if the inevitable book offers and TV deals come his way.

‘I’m still cracking on with my university work and trying to get the best out of my uni experience and degree programme,’ he told the Radio Times. ‘I have two years of study left and I certainly won’t be stopping before I’ve achieved my degree. I don’t know what will arise from all of this, but I’m at an exciting time in my life.’

Everyone will be eagerly watching to see what’s next for the ‘baby faced assassin’. 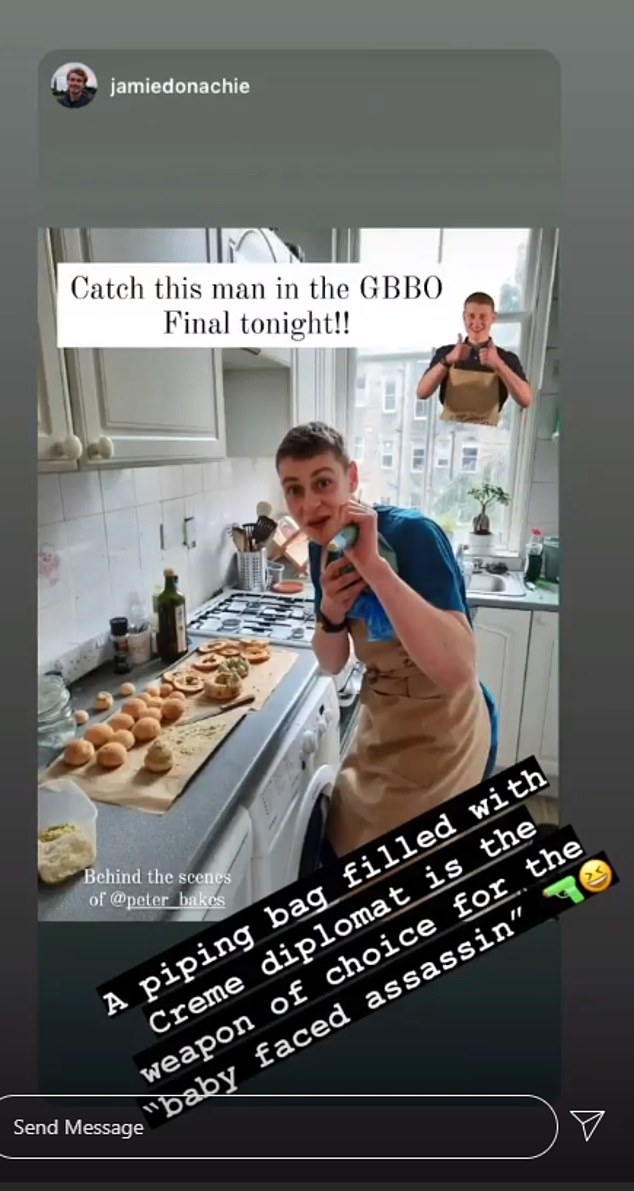 Excited: A friend shared this photo of Peter baking at home ahead of the final 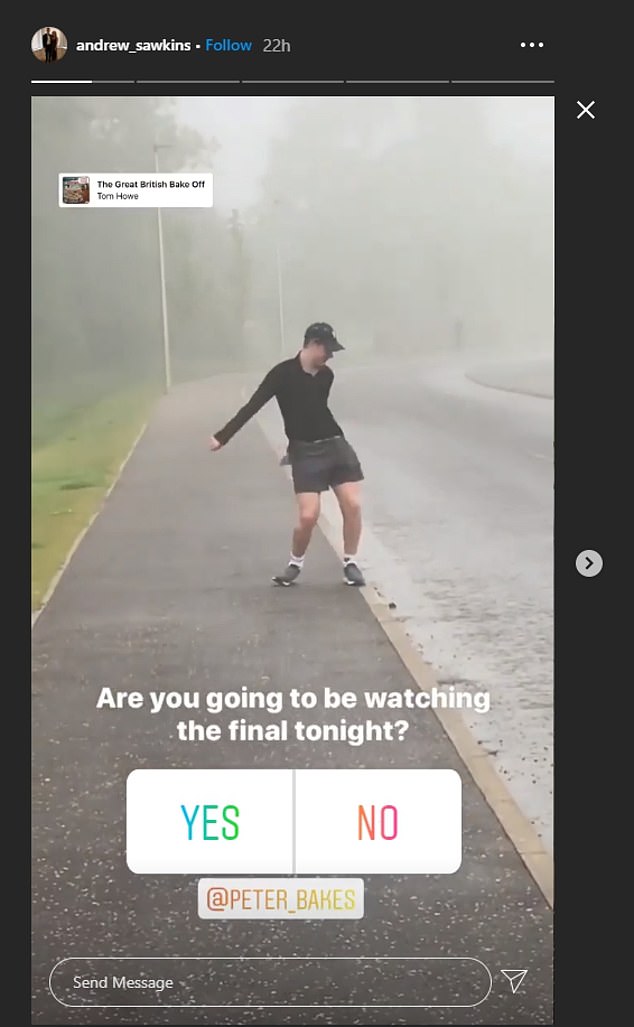