Viewers of Channel 4’s Are Women the Fitter Sex? were left stunned last night after a group of mothers revealed their ‘guilt’ over taking a ‘poisonous’ epilepsy drug during their pregnancies.

Emma Murphy and Janet Williams, from Preston, said they were assured by doctors they were safe to take sodium valproate throughout their pregnancies, despite the epilespy drug raising the risk of babies suffering serious developmental disorders by up to 40 per cent.

Appearing on the programme, mother-of-five Emma said all of her children have been diagnosed with fetal valproate syndrome, with symptoms including epilepsy, deafness, autism, cerebral palsy.

She said it was life-changing when she discovered the cause of the condition could have been taking the drug during her pregnancy, explaining: ‘It was that moment, everything I’d been saying to everyone, doctors, nurses, family…there was something wrong and nobody believed what I’d been saying. 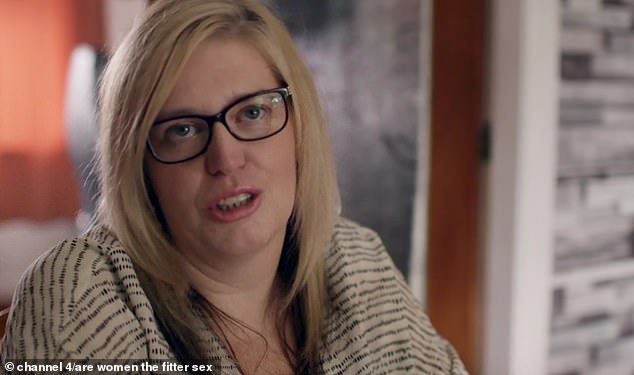 When they decided to have children, each consulted with their doctors.

Emma said: ‘The consultants always said it would be okay to take during pregnancy, there would be no risk to the baby and that’s what I did.

‘I’ve got five children and they’ve all been diagnosed with fetal valproate spectrum disorder. 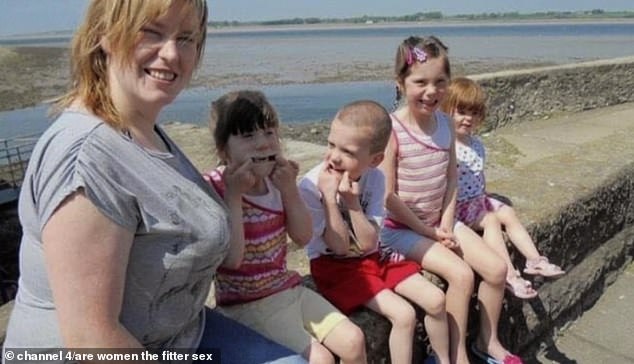 ‘There are many symptoms, autism, epilepsy, cerebral palsy, deafness, speech and language delay. A huge array.’

Emma and Janet now know these issues are related to the drugs, with Emma explaining: ‘They were poorly.

‘My sister phoned me one day and she was crying on the phone and she’d seen a lady who was appealing for women to come forward who had been on sodium valproate.’

She continued to say ‘just speaking’ with Janet to hear ‘what she’d been going through’ saved her life. 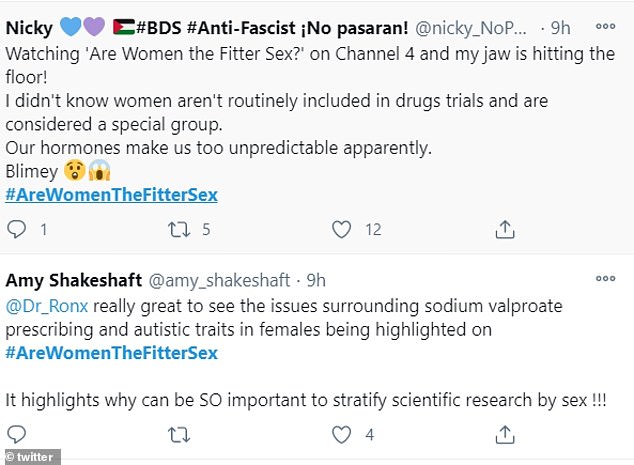 Janet explained: ‘Since we met, we decided to start this campaign, to try to support other families and look after these families in the way they should be, knowing full well they weren’t at the time.’

One family who had joined the campaign is Lisa and Robby Hurton, from Durham, and their son Kieron.

Lisa said:  ‘He knows he’s different from other people. He struggles with writing, anything fine motor, speech. His sight is improving. There’s quite a lot. 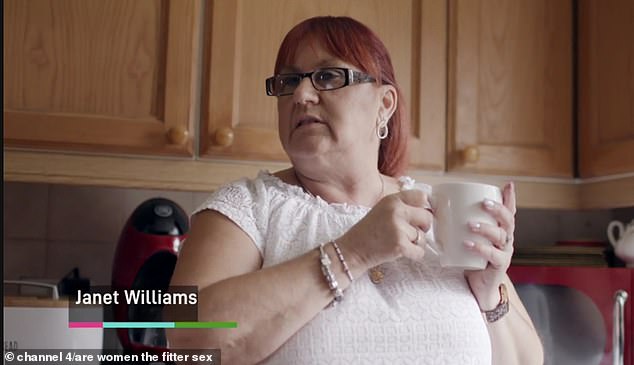 Meanwhile Janet, who has taken the epilepsy drug since she was a teenager, has also been campaigning to alert more women to the dangers

‘But he’s still special. We wouldn’t have him any other way.

‘At no point at all did they say, “You shouldn’t be taking this drug if you’re thinking about having a child in the future”, or, “We could ween you off this drug”. Anything like that.’

She continued: ‘I thought, “Is it me? Have I been a bad mum? Was I fated to be like this?” I think there will always be an essence of guilt there.’

Today thanks to Janet and Emma’s campaign, women taking the drug are much more aware of the danger. 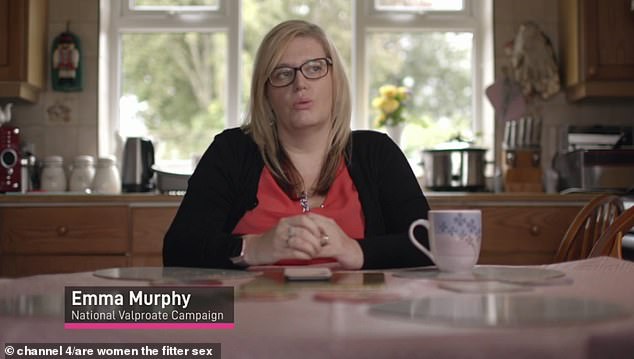 Lisa said prior to a warning being added in 2019, there was ‘not a thing’ on the packaging to suggest it was dangerous for women or those expecting a baby.

She said: ‘How many families would have been…not ruined, but turned upside  down? Without that symbol?’

Emma and Janet said it took years of campaigning for their concern to be heard, with Emma saying: ‘We definitely feel its an instituional problem.’

Janet; ‘We know there are families out there that still aren’t being told about this. There were 400 babies harmed by the drug last year.’

What is sodium valproate?

Sodium valproate controls electrical functions in the brain to prevent life-threatening seizures, with Epilim typically being a go-to brand in the UK and Ireland.

It is used to treat epilepsy and bipolar disorder. It’s occasionally used to prevent migraine headaches.

What is Foetal valproate syndrome?

Foetal valproate syndrome occurs when babies are exposed to the drug during the first three months of their mothers’ pregnancies.

Treatment may involve paediatricians, surgeons and physiotherapists, depending on the individual sufferer’s symptoms.

Around 20,000 children in the UK have been affected by the drug, according to campaigners.

How are women being warned about the drug?

In 2014 The European Medicines Agency agreed to strengthen warnings and restrictions on sodium valproate’s use in women and girls.

The Medicines and Healthcare Regulatory Agency (MHRA) advised healthcare professionals not to prescribe the drug to females unless other treatments are ineffective or poorly tolerated.

On February 8 2016, the MHRA launched a toolkit to help healthcare professionals talk to women with epilepsy about sodium valproate’s risks during pregnancy.

Prominent written warnings were also added to the drug’s packaging in 2016.

On April 6 2017, NHS Improvement and the MHRA sent a Patient Safety Alert through the central NHS system to further highlight sodium valproate’s risks during pregnancy.

A public hearing was held in London on 26 September 2017 by the European Medicines Agency’s Pharmacovigilance Risk Assessment Committee where EU citizens spoke of their experiences of the medication.

In 2018, NICE data revealed the drug raises the risk of babies suffering serious developmental disorders by up to 40 per cent and malformations, such as cleft palates or lips, by 11 per cent, if it is taken during pregnancy.

At the time, it emerged a professor from the University of Liverpool was studying a boy affected by sodium valproate syndrome to determine if he developed the condition as a result of his grandmother taking the drug during pregnancy.

FACS Aware, which campaigns for sufferers of foetal anti-convulsant syndromes, is fighting for all drugs containing sodium valproate to have a picture warning against their use during pregnancy on their packaging, as well as increased support for sufferers and better awareness among healthcare professionals.

The women said they want others to be able to have the information to be able to make informed decisions about their bodies and babies.

Many of those watching were left horrified by the programme, with one commenting: ‘Hoomum is picking her jaw up from the floor watching #AreWomentheFitterSex. How is this level of discrimination even possible in the 21C?’

Another posted: ‘Watching #AreWomenTheFitterSex and I was on that drug those women campaigned to get warnings on.

‘I was on it for years for bipolar but had told the DR I never wanted kids. Mad that they don’t tell women wanting kids the harm they do!’ 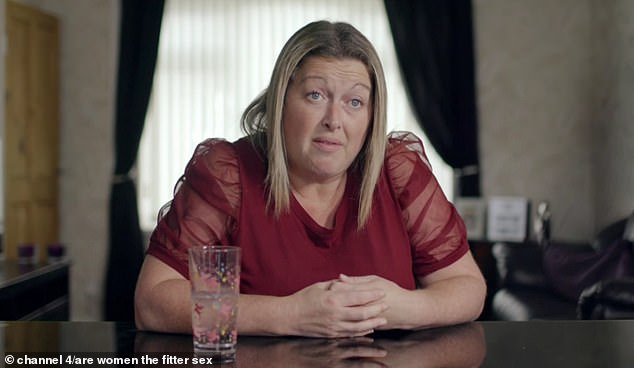 Lisa, from Durham, also appeared on the programme and said she was left questioning ‘if she was a bad mum’ because of the impact the drug had on her son

Another wrote: ‘Really great to see the issues surrounding sodium valproate prescribing and autistic traits in females being highlighted on #AreWomenTheFitterSex.

‘It highlights why can be so important to stratify scientific research by sex!’

One added: ‘That was a necessary film. Sadly, I suspect it only scratched the surface.’