The French government is set to make it official that mothers should not have to wear face masks while giving birth, a leaked document has revealed.

In a draft press release dated November 2, obtained by Real Press, the French Minister Delegate for Gender Equality, Diversity and Equal Opportunities, Elisabeth Moreno, and the Secretary of State for Child Protection Adrien Taquet have said that ‘wearing a mask cannot be imposed on the expectant mother.’

While the document is still a draft, it seems to indicate the French government is about to side with pressure groups and expectant mothers who have been calling for a clear position on the matter.

But campaigners have been sharing their stories of distress in the media to protest against the rule, including one mother who claimed her face covering had to be replaced with an oxygen mask during a C-section after her blood pressure dropped. 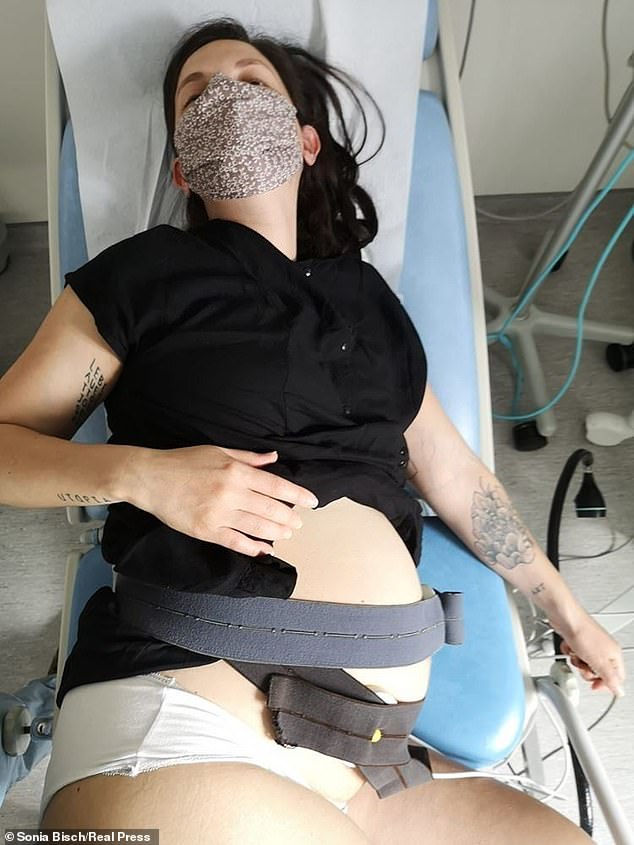 A leaked draft document written by the French government reveals that the French Minister Delegate for Gender Equality, Diversity and Equal Opportunities, Elisabeth Moreno, and the Secretary of State for Child Protection Adrien Taquet have made it official that masks should not be imposed on mothers in labour. Pictured: a pregnant woman with a mask on at hospital

A translation of the document reads:  ‘Élisabeth Moreno and Adrien Taquet join the words of the National College of French Gynaecologists and Obstetricians (CNGOF) to remind that birth must remain a privileged moment despite this context of epidemic and that all couples will no doubt be careful to respect as much as possible the safety instructions given to them by maternity staff.’

‘The Minister Delegate for Gender Equality, Diversity and Equal Opportunities, and the Secretary of State for Child Protection welcome the medical recommendations allowing mothers to be accompanied during childbirth, including during a possible caesarean, and with the other parent by their side,’ it went on.

This comes after a major midwife body in France issued recommendations against mothers in childbirth wearing face masks after stories of women being forced to put them on while giving birth caused outrage and attracted international media attention. 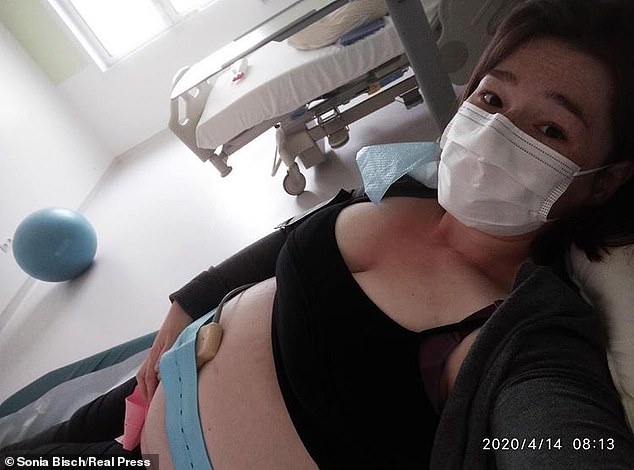 Several French women have come forward to disclose how traumatic their deliveries had been after hospital staff forced them to keep their masks on while struggling to breath during childbirth (pictured: another mother wearing a mask in her hospital room)

This recommendation completely contradicted that of the National College of French Gynaecologists and Obstetricians (CNGOF) which said in September that women should wear face masks while giving birth.

It has fought vehemently to change the practice of French birth stations forcing birthing mothers to wear face masks during labour.

The collective sent an official statement saying: ‘The National College of Midwives (CNSF) has just responded positively to our mobilisation by publishing recommendations for good medical practice that protect healthcare workers and women correctly during childbirth, while preserving their families.’ 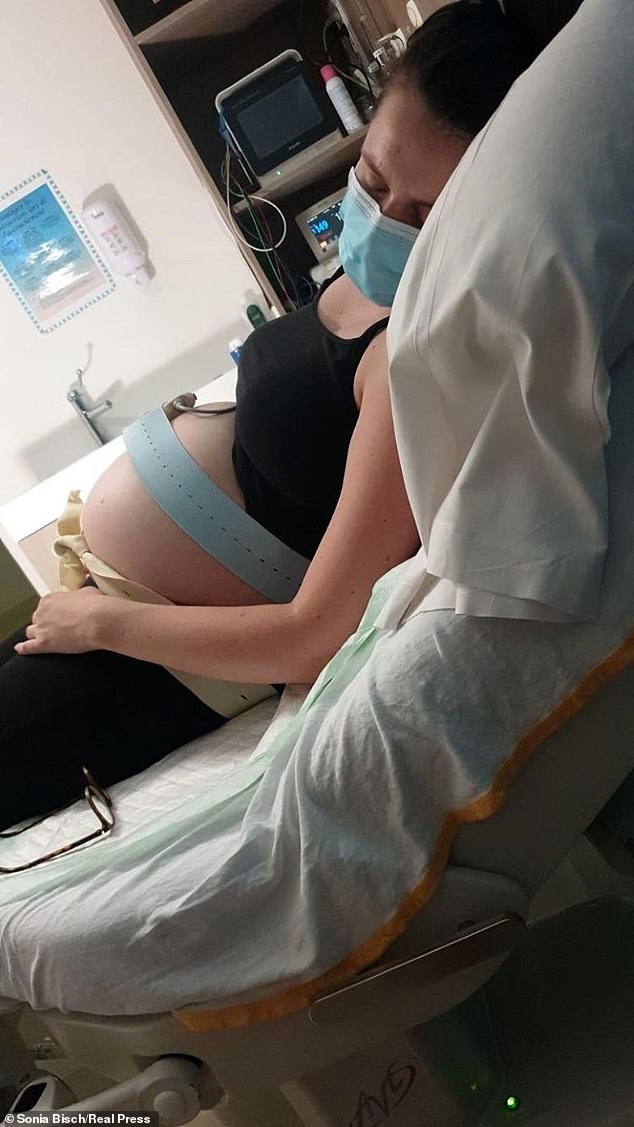 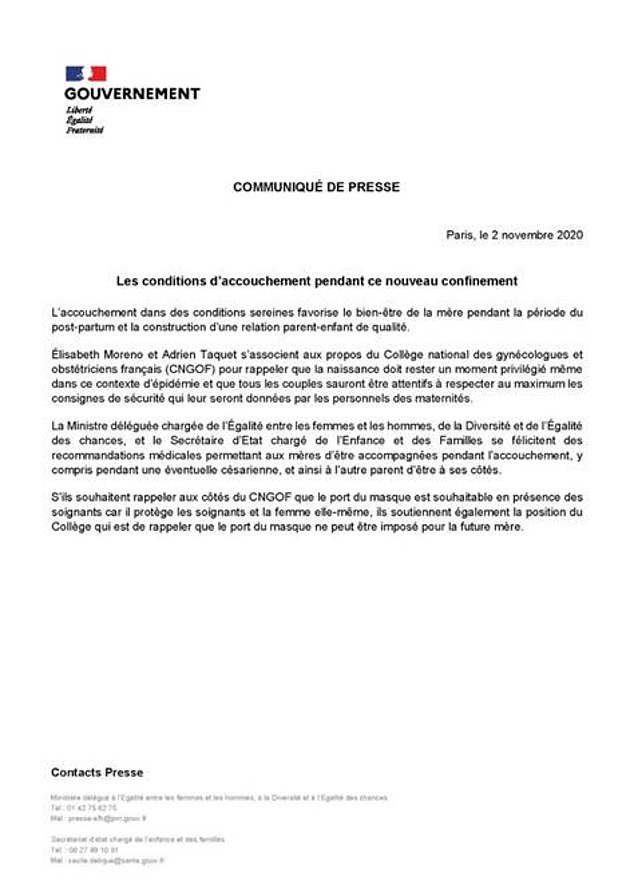 A copy of the press release drafted by the Minister Delegate for Gender Equality, Diversity and Equal Opportunities, Elisabeth Moreno, and the Secretary of State for Child Protection Adrien Taquet and which was leaked by an anonymous source

They added that the ‘presence of the accompanying person throughout the delivery, from the start to the end of labour’ should be allowed.

The organisation also provided data on how many maternities had stopped forcing pregnant mothers to wear masks during deliveries.

Sonia said that at the height of the pandemic, ‘80 percent of birthing mums were forced to wear face masks during childbirth.’

‘From mid-October, approximately 20 percent of the 240 maternities called did not impose the mask during childbirth,  80 percent did.

‘Thanks to our mobilisation against wearing a mask during childbirth, women have continued to help us identify maternity practices by calling them and filling out our online form. Now it is no longer 20 percent but 34 percent of maternities (according to our results) that no longer impose the mask,’ she said.

‘We called 300 different maternities, some were called again to see if their protocol had changed,’ she explained.

‘Some have indeed changed their protocols since mid-October,’ she observed.

The draft statement comes amidst a serious resurgence in the number of people infected by the coronavirus in France.

According to the latest data from Johns Hopkins University, France has over 1.3 million confirmed coronavirus cases and 36,058 deaths.

On 29th October alone, 47,637 new cases were reported, a new high for the country. President Emmanuel Macron has decreed a new nationwide lockdown. 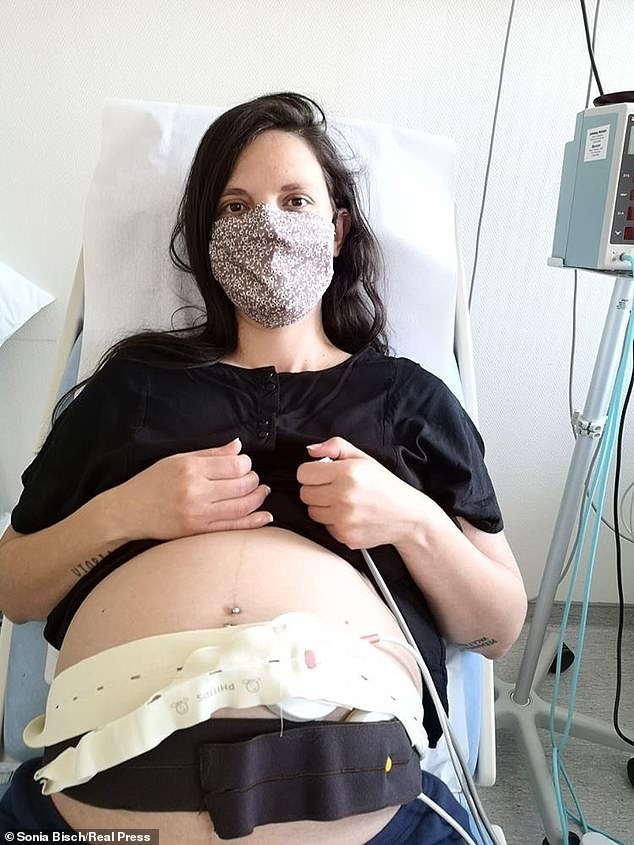 Pressure groups said forcing a pregnant woman to wear a mask during labour made ‘no sense’ because breathing helped the delivery. Pictured: an a unnamed mother during labour 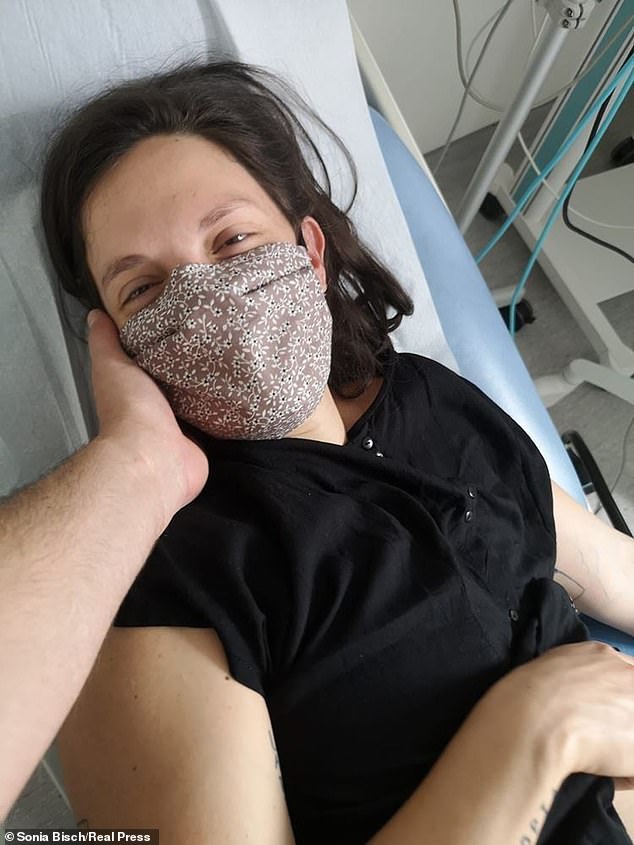 An expectant mother receives comfort from her partner during labour in an intimate picture. The French government have made it official masks are not mandatory in the delivery room

Justine Duprot, gave birth on 14th April at the Hôpital Privé de Villeneuve d’Ascq (HPVA) which belongs to the large private group “Ramsay santé”(which has many maternity hospitals), at the height of the first lockdown.

She said: ‘I went for an emergency caesarean in full lockdown. I was asked to wear a mask as soon as I entered the maternity ward and throughout the stay.

‘On the delivery table, the medical team had to replace my surgical mask with an oxygen mask as my blood pressure dropped,’ she added.

“They wanted me to wear a mask even in my room, alone with my baby.

‘”The cherry on the cake”: I gave birth alone, stayed in the maternity unit alone with very little contact with the medical professionals and dad was able to meet his son only when he was 5 days old despite his excellent health,’ she went on.

Sonia Bisch said: ‘Putting a mask on a woman during childbirth makes no sense whatsoever. We know how much breathing properly is important during this process, for the mothers and for their babies.’

The statement also said that: ‘The CNGOF preferred to recommend wearing a mask on 30th September, much to the despair of mothers.’

As France has entered its second lockdown last week, the collective has asked the health minister Olivier Veran ‘not to make the same mistakes that were made during the first lockdown’ earlier this year.

The collective said that a number of members of Parliament and Senators support them including ‘Marie-Pierre Rixain , Valerie Petit , Cedric Villani , Laurence Cohen , and Laurence Rossignol.’ 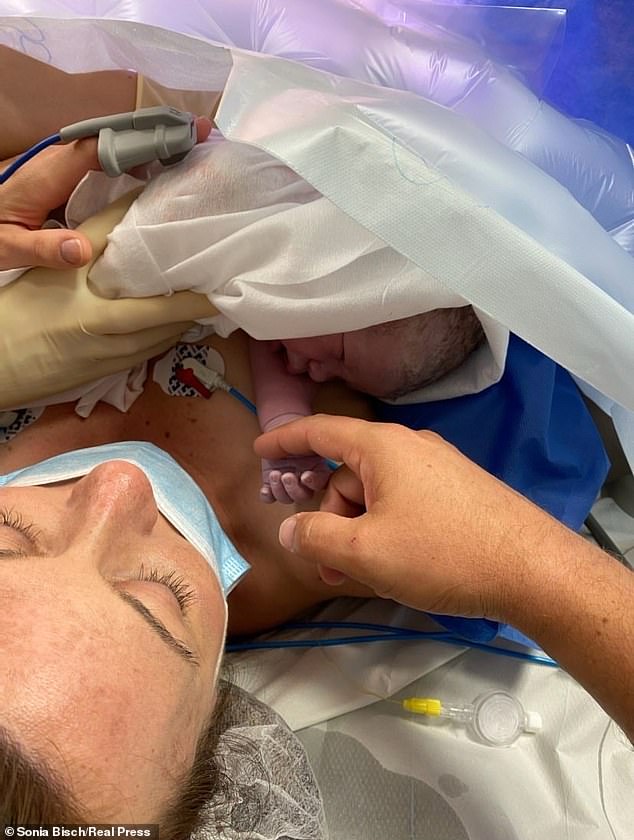 A mother pictured wearing a mask moments after giving birth. French mothers have recounted how they were forced to keep their masks on and told off by staff for taking them off after experiencing difficulties breathing 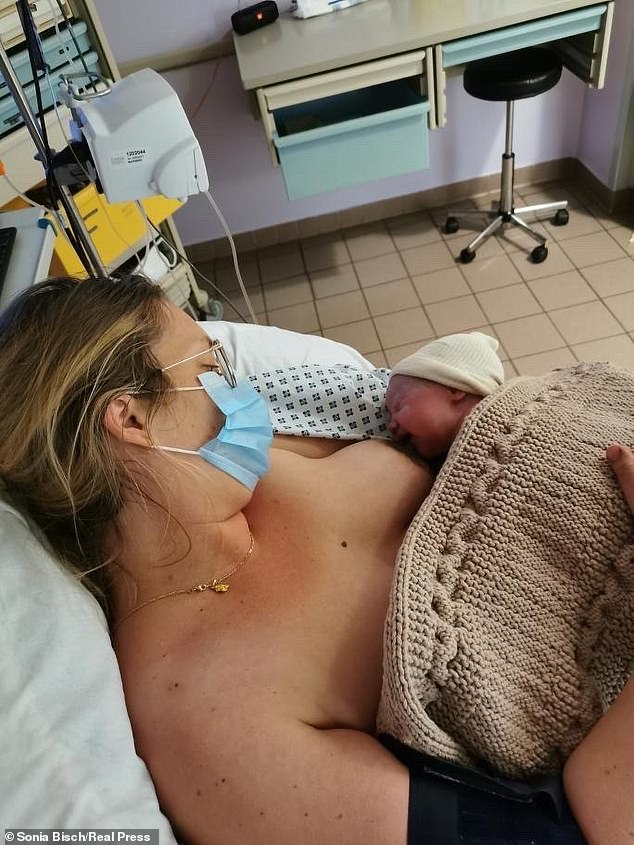 A mother still wearing s mask while breastfeeding her child after giving birth. Some women have shared how distressing they found it to be without their partners in the delivery room

The breakthrough follows widespread outrage in France over women being forced to wear face masks during childbirth in incidents leading in some cases to emergency C-sections.

Mothers had pointed out that somebody exercising in a fitness centre was exempt from wearing a mask, yet a pregnant woman in a clinic who might have 36 hours of hard work to give birth often has to wear a mask the whole time.

Most maternity wards in France have decreed that if women refuse to wear a mask, doctors can refuse to treat them, a practice that is not followed in the UK or in the US. 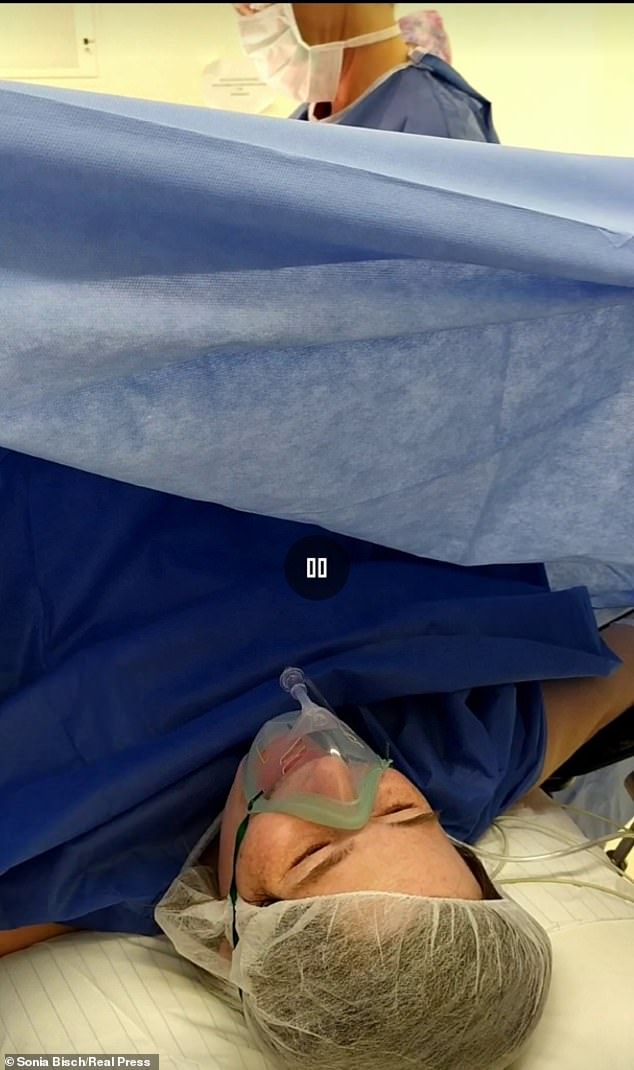 Critics, including medics and campaigners, have argued that women are finding themselves in unnecessary distress leading to them becoming too weak to push and that birthing teams should wear FFP2 and higher grade PPE instead.

Hospitals have however previously defended the practice as a precaution to limit the spread of COVID-19 as there is not enough time to wait for a coronavirus test result when a woman comes in in labour.

The National College of French Gynaecologists and Obstetricians, however, has said that the situation is ‘exceptional’ and that mask-wearing during labour is ‘desirable’ but cannot be enforced.

The StopVOG collective had received replies from over 2,000 new and expecting mothers since 8th September.