Ivanka Trump returned to Florida to stump for her father, President Donald Trump, at a ‘Make America Great’ again rally in Sarasota for her last full week of campaigning before the election.

The White House senior adviser was dressed for the scorching heat in a $595 white cotton dress by Alexis Gyles, and while she was being driven to the event held at Nathan Benderson Park, she filmed a short video encouraging fans to get out and vote.

‘I’m so excited to be back in Florida. I am headed to an amazing ‘Make America Great’ again rally in Sarasota. Always great to be here campaigning for President Trump and here just generally,’ she gushed in the clip, which she shared on her Instagram Stories. 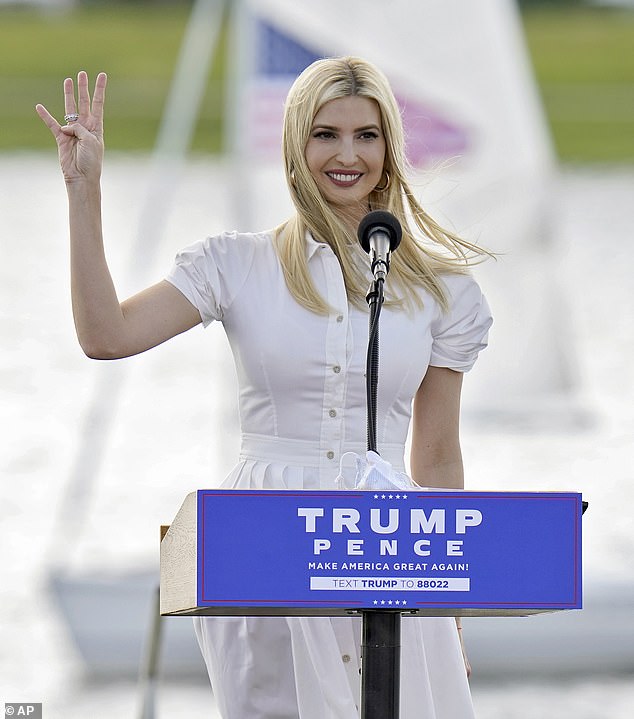 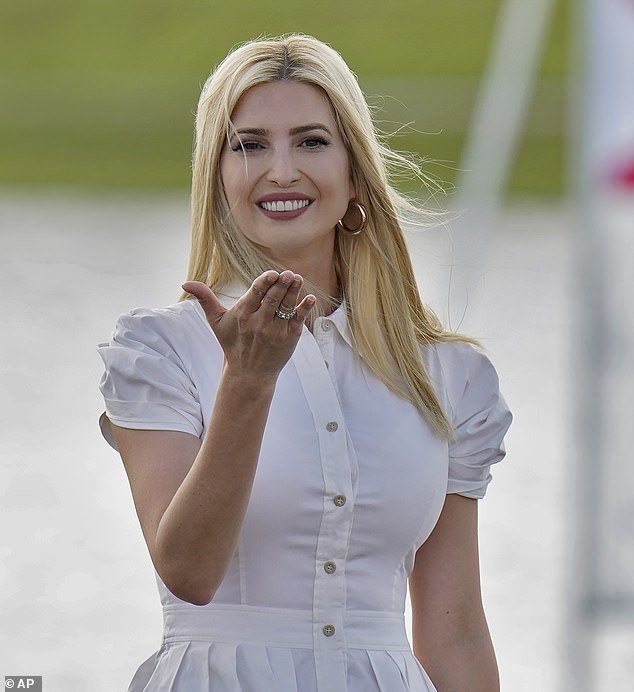 Hamming it up: Ivanka blew a kiss to the crowd when she took the stage at the event

‘Voting has started, so get out and vote,’ she added. ‘Vote early, vote now, bring your friends. So important.’

President Trump’s eldest daughter also posted footage of the crowd cheering and shouting, “Four more years!’ as she walked through the park.

Ivanka was dressed for a summer day in her short-sleeve A-line shirt dress — a recycled look from her 2019 solo tour in Africa — and strappy nude heels.

She wore her blonde hair center-parted and styled straight for the event, her go-style while on the campaign trail. 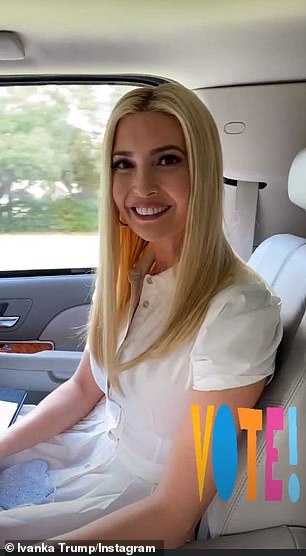 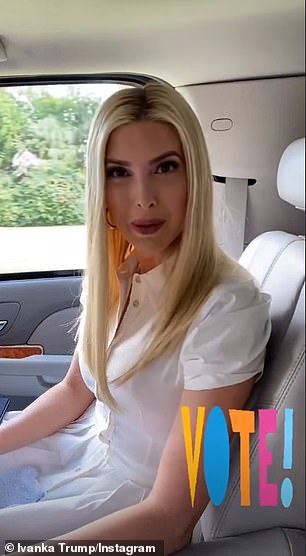 Just a reminder: The first daughter filmed a short video encouraging supporters to get out and vote while she was driven to the rally held at Nathan Benderson Park 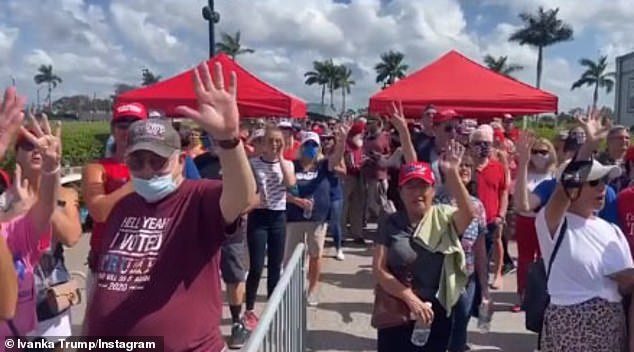 Fans: President Trump’s eldest daughter also posted footage of the crowd cheering and shouting, “Four more years!’ as she walked through the park

The first daughter was perfectly coiffed, sporting smokey eye makeup and a dusty-rose lipstick, another signature look for the former businesswoman.

Timothy Fanning, a government reporter at the Herald-Tribune, live-tweeted Ivanka’s speech, saying it was the exact same one she gave in Fort Meyers, Florida, last week.

Ivanka told the crowd that the Republican Party is the party of the American dream, claiming that Democrats will turn it into a socialist country.

‘There is only one choice in this election. Mr. Donald J. Trump,’ she said.

Some supporters wore face masks, but there was little social distancing going on at the rally. 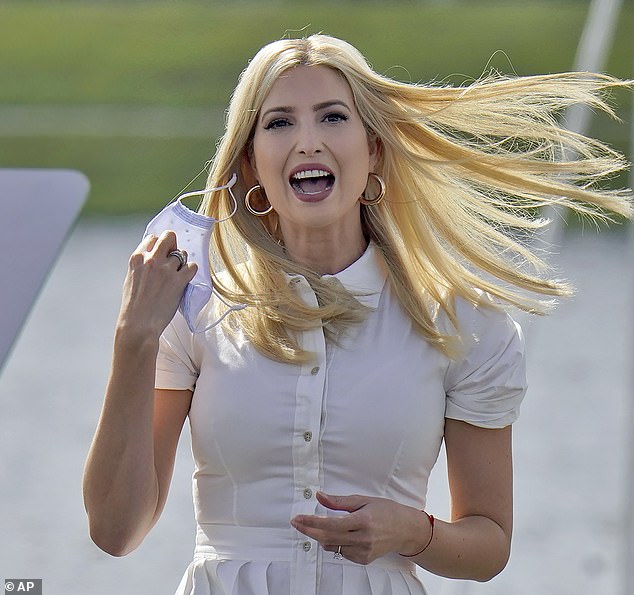 Ready to go: Ivanka ripped off her mask as soon as she got on stage 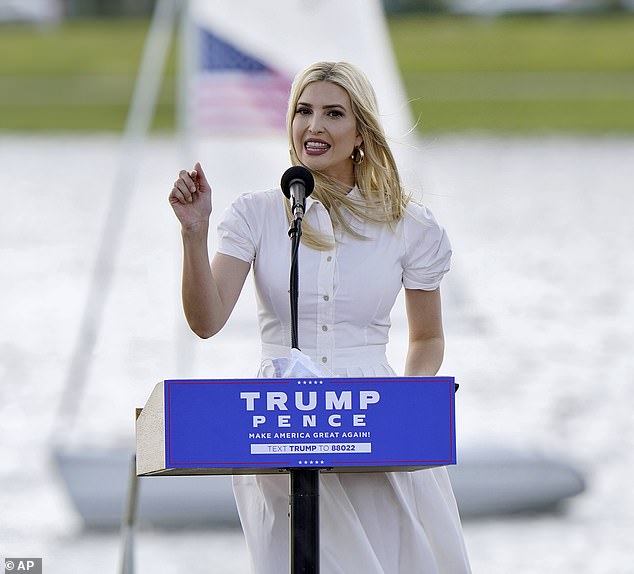 Repeat: The White House senior adviser gave the same speech she delivered in Fort Meyers, Florida, last week, according to a local reporter 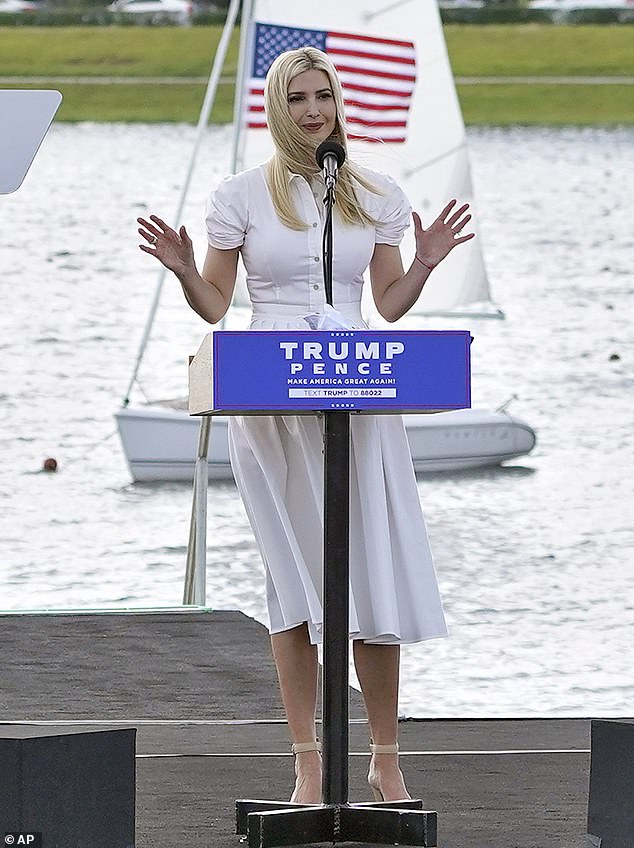 Dressed to impress: Ivanka battled the heat in Sarasota on Tuesday in an Alexis Gyles frock and nude strappy heels

Button up a classic shirt dress by Alexis like Ivanka

The shirt dress is a timeless piece that puts a ladylike twist on classic tailoring. It’s perfect for transitional weather since one can easily layer on a cardigan, coat and tights for a chilly day.

Ivanka is wearing a puff sleeved number by Alexis, an American designer known for her flirty, feminine aesthetic. The midi length and nipped waist make it tea time appropriate and a autumn must have.

Click to the right to see more from the label as this exact one is sadly now sold out.

Alternatively, check out the carousel below where we’ve rounded up the best of the rest when it comes to classic white shirt dresses.

Ivanka had on a mask as she stopped to greet a throng of fans who crowded around her after her speech.

While Ivanka was stumping in Florida, her stepmother, First Lady Melania Trump, traveled to Pennsylvania for her first solo campaign stop of the year.

Melania delivered a blistering campaign speech in support of her husband on Tuesday, attacking Democrats for impeaching him, Joe Biden for criticizing him, and the media for focusing on ‘idle gossip and palace intrigue.’

The first lady didn’t hold back in a fiery address that made the case for voters to give President Trump a second term, slamming his rival as a ‘socialist’ who would ‘destroy America.’ 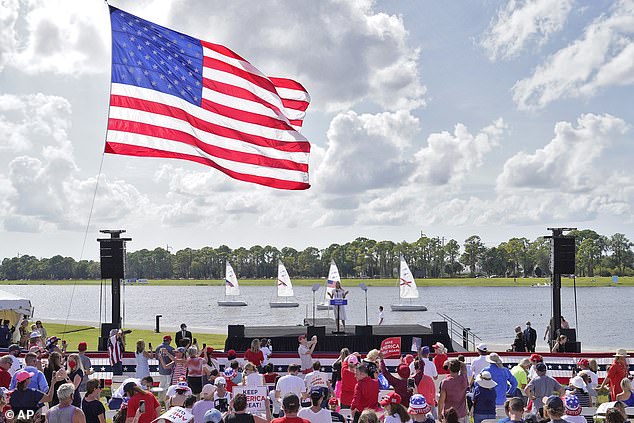 Crowded: Some supporters wore face masks, but there was little social distancing going on at the rally 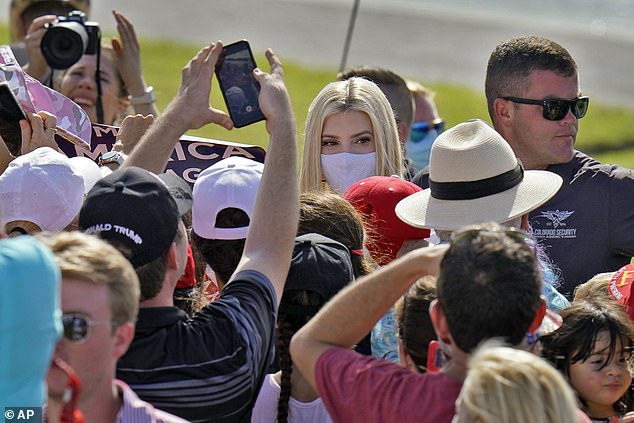 Getting close: Ivanka had on a mask as she stopped to greet a throng of fans who crowded around her after her speech 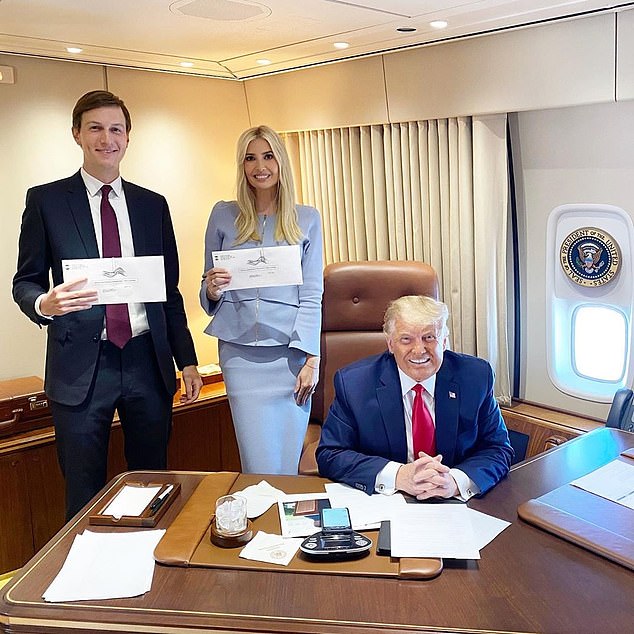 Mailing it in: On Monday, Ivanka shared a grinning photo of herself and her husband Jared Kushner holding their mail-in ballots on Air Force One last week

On Monday, Ivanka shared a grinning photo of herself and her husband Jared Kushner holding their mail-in ballots on Air Force One just minutes after her father railed against ‘massive fraud’ in the elections.

Jared and Ivanka can be seen holding envelopes from the New York State Board of Elections, where they are voting absentee.

The photo was taken last Tuesday when the family was on their way to Nashville, Tennessee, for the final presidential debate. 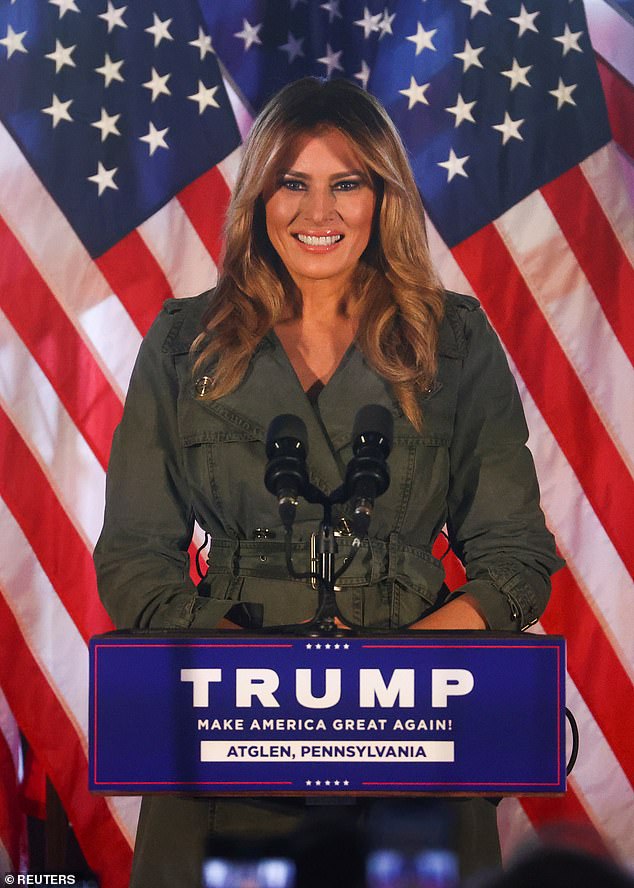 Making an appearance: While Ivanka was stumping in Florida, her stepmother, First Lady Melania Trump, traveled to Pennsylvania for her first solo campaign stop of the year 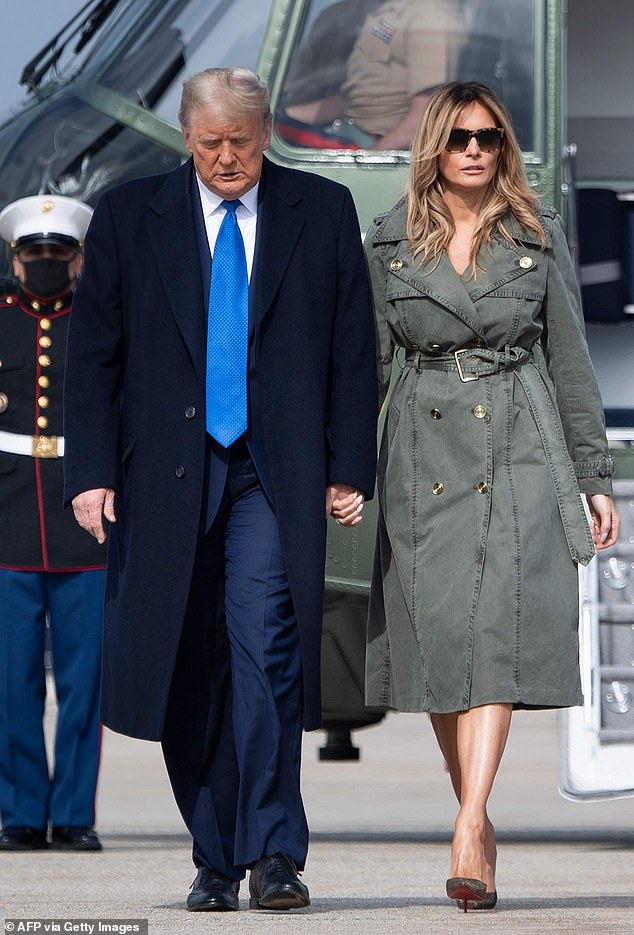 Busy: President Trump and his wife traveled to Joint Base Andrews in Maryland together before hopping on separate flights. He went to Michigan, while she headed to Pennsylvania

President Trump is seated at his desk aboard the presidential aircraft, with a blank page and a mobile phone in front of him, as well as a photograph that looks to be of one of his recent Rose Garden interviews.

‘I’ll give you one guess who we’re voting for???’ the first daughter teased in the caption.

Trump himself voted in-person in Florida over the weekend. He has told rally crowds he likes that form of voting better, and on Monday he once again claimed a flood of mail ballots would lead to fraud.

‘It’s the only way we can lose in my opinion is massive fraud,’ Trump said in Allentown, Pennsylvania.