Krispy Kreme is giving away free donuts on Election Day.

Anyone who visits a Krispy Kreme store next week on November 3 can walk out with one free glazed donut — no purchase necessary.

The chain is further celebrating democracy by handing out ‘I Voted’ stickers, which some people may not get this year due to an increase in mail-in voting. 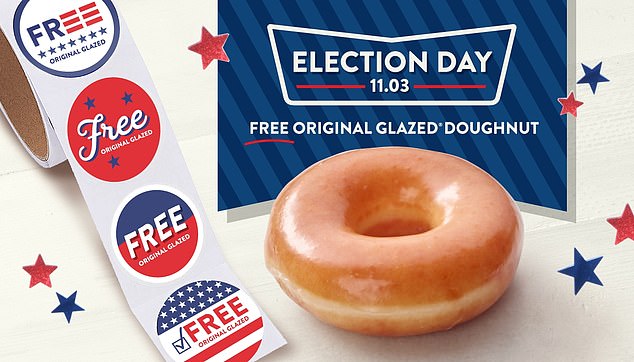 Yum! Anyone who visits a Krispy Kreme store next week on November 3 can walk out with one free glazed donut

‘If you’re out and about on Election Day, we want to thank you by giving you a free Original Glazed doughnut,’ Dave Skena, chief marketing officer of Krispy Kreme,’ said in a press release.

‘And if you didn’t get your “I Voted” sticker because you voted before Election Day, we’ve got you covered there, too,’ he added.

The donut store isn’t the only chain giving out freebies on the big day.

According to Good Morning America, the list of free food giveaways on Election Day is growing, with Boston Market and Chopt joining in.

Meanwhile, other stores are closing up entirely to give employees the chance to vote.

Coca Cola and Ben & Jerry’s are also giving all employees the day off.

In the retail sector, J. Crew, Madewell, and Patagonia, are all giving all employees the day off to vote as well.

Best Buy isn’t opening until noon so employees have more time to cast ballots, while White Castle is closing all locations from 7 a.m. until 11 a.m. for the same reason.