BBC academic quiz University Challenge is supposed to be a celebration of the UK’s finest young minds but viewers are, it seems, becoming increasingly distracted by the lack of diversity amongst contestants.

The latest episode of the programme, which aired at 8pm on BBC2 with regular host Jeremy Paxman at the helm, once again saw an all male line-up of the show.

Just five women have featured in the last five episodes of the programme, compared to 35 male contestants, despite the fact that more women than men attend university in the UK. 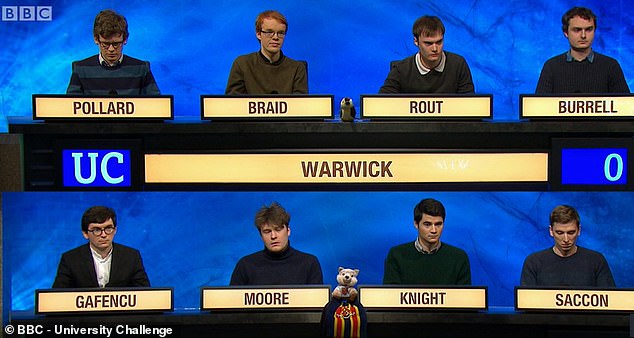 Another episode, another all-male line-up… many viewers tuning into the 12th episode this series of University Challenge were shocked by the lack of diversity amongst the teams from Warwick and Wolfson Oxford

On Twitter, many slammed the ‘diversity fail’ saying they didn’t know whether the BBC or the universities were at fault for the lack of inclusion.

@Salaman16222850 wrote: ‘What are the chances 8 white men who sound distinctly middle class are the best quizzers from two unis? Disgraceful show of this lack of diversity #UniversityChallenge

@KristaMitchy said: ‘57% of university students in the UK are female. 26% are BAME. Obviously none of them go to Warwick or Wolfson.’

@foxcubofwm wrote: ‘Not sure if the lack of diversity in the #UniversityChallenge teams reflects more badly on the Universities or the BBC?’

A spokesperson for the BBC told MailOnline: ‘While the make-up of each team is ultimately decided by the university it represents, we encourage all teams who apply to reflect the diversity of their student population, and we will continue to look at how we can work with universities to help them with this’.

It’s not the first time this series that the show has been slammed for a lack of representation.

Viewers tuning into the very first episode back in July found two teams – from the University of Glasgow and Exeter University – fielding seven white men out of eight possible contestants.

Gravett, who appeared for Exeter, was the only female contestant. 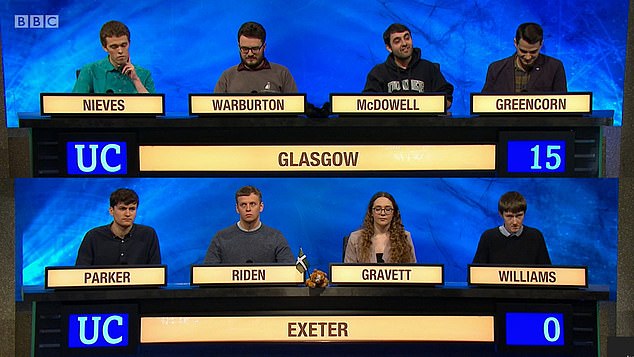 Form? The first episode of the show saw Glasgow and Exeter Universities fielding just one woman between them…and it’s a trend that’s continued as the series has progressed