A California woman is going viral for a Twitter thread packed with advice for what people should do before they get married.

Twitter user @cxkenobxkerry shared the advice on July 23, warning others to discuss subjects like children, religion, and finances before they tie the knot — and to evaluate sexual compatibility, too.

The marriage checklist has certainly resonated on the social media platform, where over 220,000 people have liked her thread and 61,000 have retweeted it. 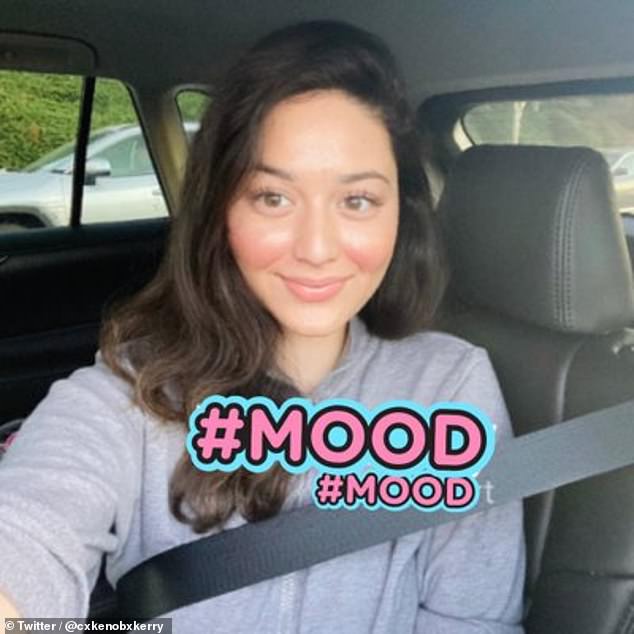 Viral: Twitter user @cxkenobxkerry is going viral for a Twitter thread packed with advice for what people should do before they get married

Suggestions: She shared the advice on July 23, and it has has certainly resonated on the social media platform, where over 220,000 people have liked it 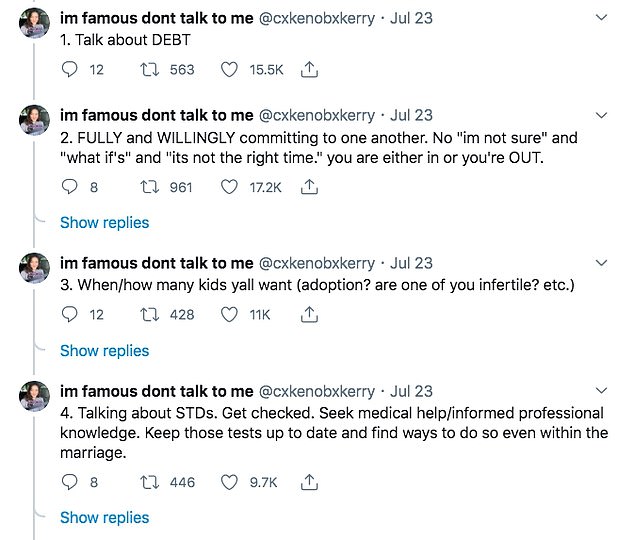 Discussions: She told people to discuss debt, determine how many kids they want, and get checked for STDs

The Twitter user’s list includes 20 points that people should discuss and evaluate closely before saying ‘I do’ to ensure compatibility.

She said that people should get married before they discuss debt, savings, and finances, determining how they will split bills, whether they have debt, salary, expenses, future financial expectations, and if they intend to take in their parents when they get old.

Couples should also ‘FULLY and WILLINGLY committing to one another,’ she said.

‘LOVE is not what keeps relationships going,’ she noted. ‘An active commitment to LOVE, despite the downfalls, keeps it going. Get out the princess-king happily ever after mindset and you’ll be fine.’ 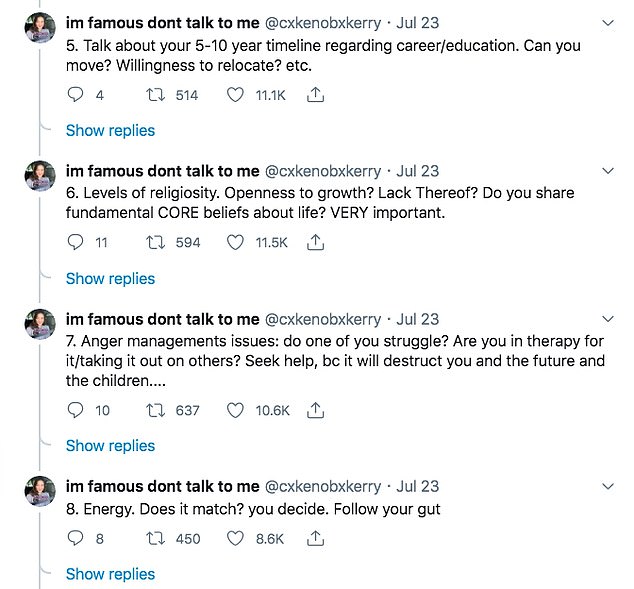 What the future holds: She said couples should also tackle anger management issues, make sure they’re on the same page about religion, and discuss their five-ten year timeline 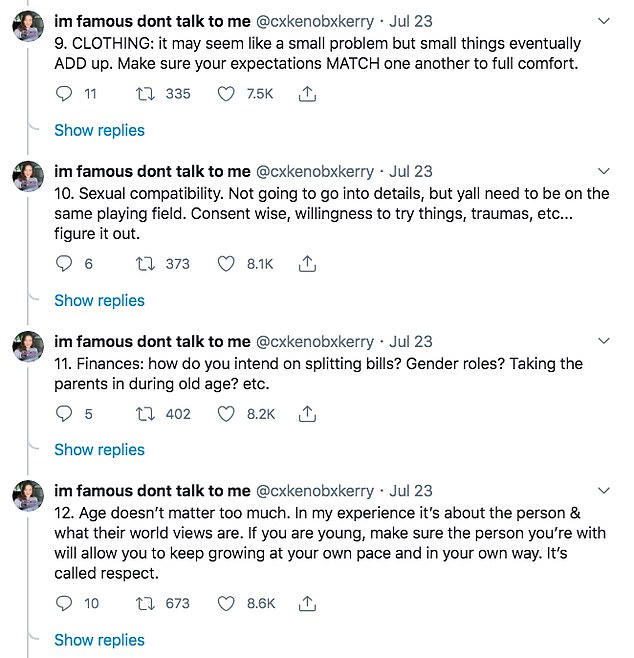 Honesty: The Twitter user also said they should make sure they are sexually compatible and must openly discuss finances

People should discuss their expectations for the future, including how many kids they want, when they want to have them, and whether they’re interested in adoption.

‘Talk about your 5-10 year timeline regarding career/education. Can you move? Willingness to relocate?’ she went on.

Evaluating ‘levels of religiosity’ is also important and making sure a couple shares ‘fundamental CORE beliefs about life.’

‘Age doesn’t matter too much,’ she said. ‘In my experience it’s about the person & what their world views are. If you are young, make sure the person you’re with will allow you to keep growing at your own pace and in your own way. It’s called respect.’

‘Energy: Does it match? you decide. Follow your gut,’ she went on.

‘Clothing: it may seem like a small problem but small things eventually ADD up. Make sure your expectations MATCH one another to full comfort. 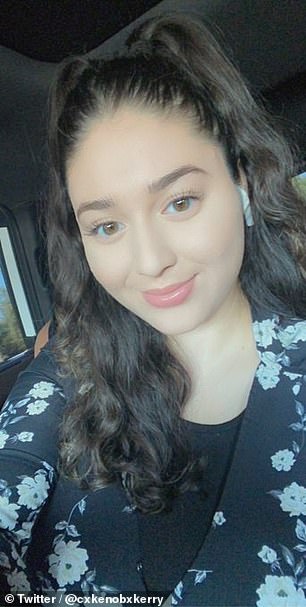 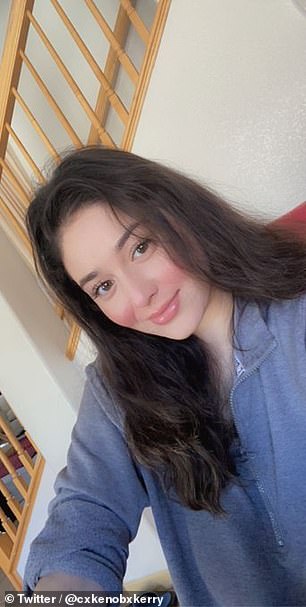 Expertise? It’s unclear if the Twitter user, who appears to be in early 20s and is from California, is married herself 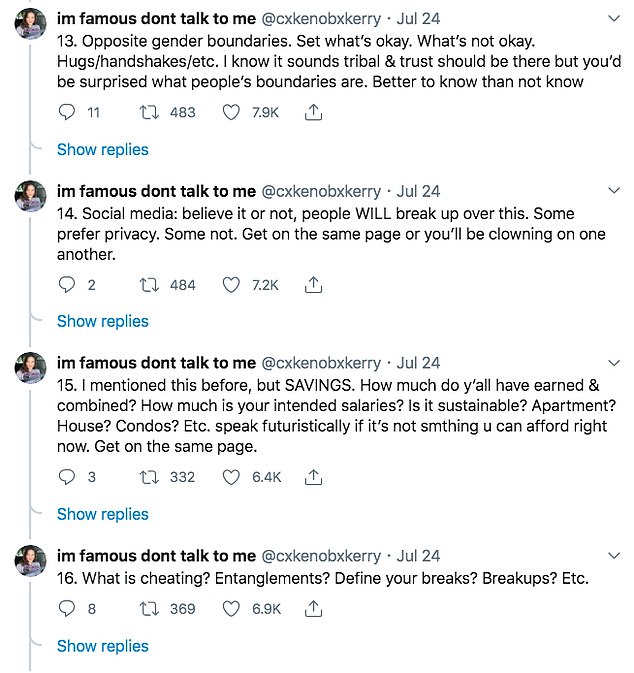 Agreement: She also told Twitter users to share details of their savings, discuss social media use, and determine what kind of interactions with the opposite sex are OK

‘Social media: Believe it or not, people WILL break up over this. Some prefer privacy. Some not. Get on the same page or you’ll be clowning on one another.

Finding sexual compatibility is also important, she said, writing: ‘Yall need to be on the same playing field. Consent-wise, willingness to try things, traumas, etc… figure it out.

‘Talking about STDs,’ she added. ‘Get checked. Seek medical help/informed professional knowledge. Keep those tests up to date and find ways to do so even within the marriage.’

Couples should also discuss their definitions of cheating and what they are willing to tolerate.

‘Opposite gender boundaries: Set what’s okay. What’s not okay. Hugs/handshakes/etc. I know it sounds tribal & trust should be there but you’d be surprised what people’s boundaries are. Better to know than not know,’ she said. 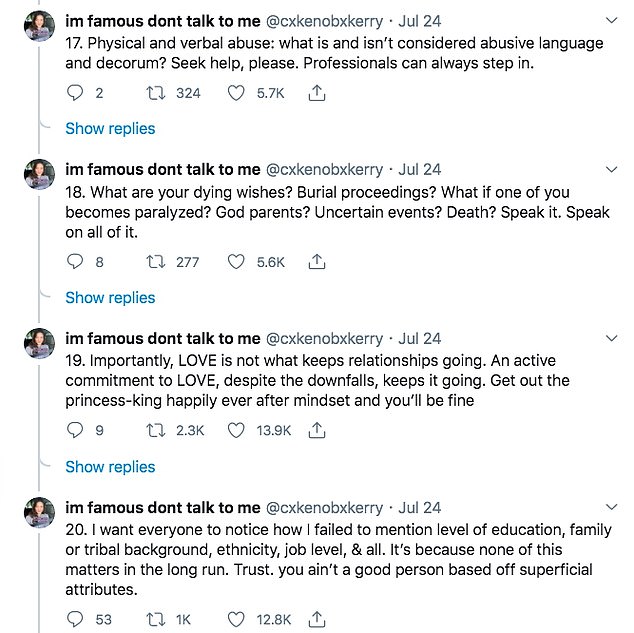 If you say so: She didn’t mention level of education, family or tribal background, ethnicity, or job level, because in her opinion, ;none of this matters in the long run’

Also important is evaluating any anger management issues in a partner — and if one person does have issues, are they willing to seek therapy?

Finally, she said couples should discuss their dying wishes, as well as what they’d want should they become paralyzed.

She also noted that she didn’t mention level of education, family or tribal background, ethnicity, or job level, because in her opinion, ;none of this matters in the long run.’

While the thread has gone viral, it has had some mixed reactions. Some commenters have praised her for her insightful advice, while others have disagreed with her on several points.