Twins are often born identical or looking similar in appearance, but in the case of a Florida brother and sister, the two couldn’t look more different.

Nine-year-old She’riq Elliott from Pembroke Pines was born with albinism but her twin brother, Te’riq Elliott, was born without the condition, leaving many strangers refusing to believe that the pair are actually related – particularly because they are so different in personality. 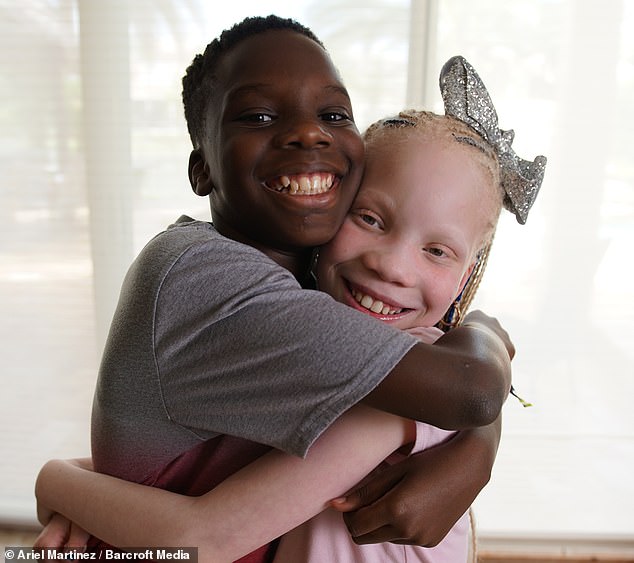 Best buds: She’riq, who was born with Albinism, and Te’riq Elliott, nine, were born as fraternal twins but could not look more different from each other 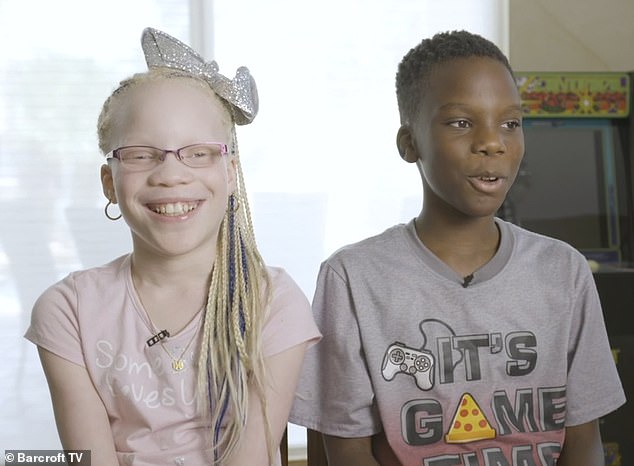 The comments: The twins said strangers will often approach them and not believe they are twins because of their appearances 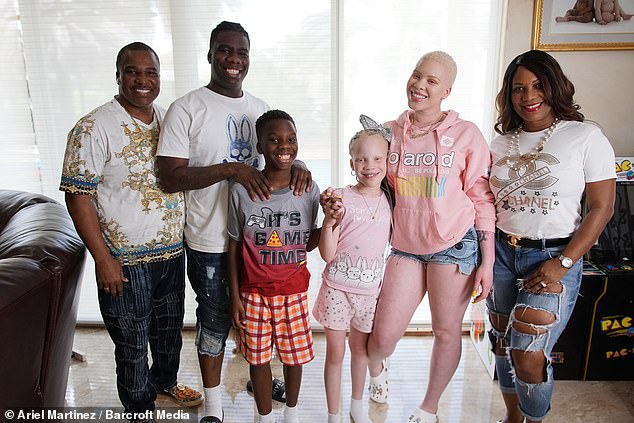 ‘Everybody comes up to me and they’re like, “Why are you lighter than your brother?” So I tell them,’ she continued.

Te’riq added: ‘I help my sister because my friends always tell me, “Hey Te’riq why is your sister a different type of color?” and then I just explain it and they’re like, “Oh that’s cool.”‘

One in 18,000 to 20,000 people in the United States are born with albinism, which causes pale skin, sensitivity to the sun, and eyesight issues.

This wasn’t the first experience of albinism for parents Sherria and Terry Elliott Sr., who had welcomed a daughter with the same condition 10 years before the twins.

Now 20, older sister Sheterria has been a mentor and support for She’riq, having navigated the negativity that can come when living with a misunderstood condition.

‘I think that I’ve helped my sister cope with having albinism because I’ve gone through all the hard times so I was able to educate her, let her know that it’s not a disease, you’re okay, we’re going to be fine,’ Sheterria said.

‘I would tell her how to respond to certain remarks, be nice, but let them know what it is that you have.’

She recalled when the twins were first born: ‘I was in elementary school and I was so excited because I wanted one to come out looking like me.’ 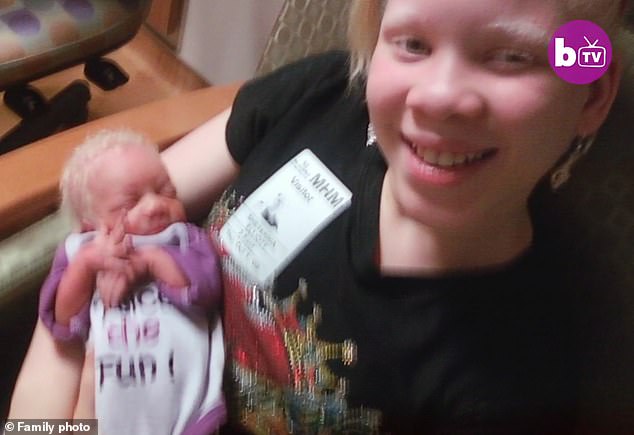 Lending a hand: Sheterria (pictured with her younger sister at birth) has helped guide She’riq on navigating the world with her condition 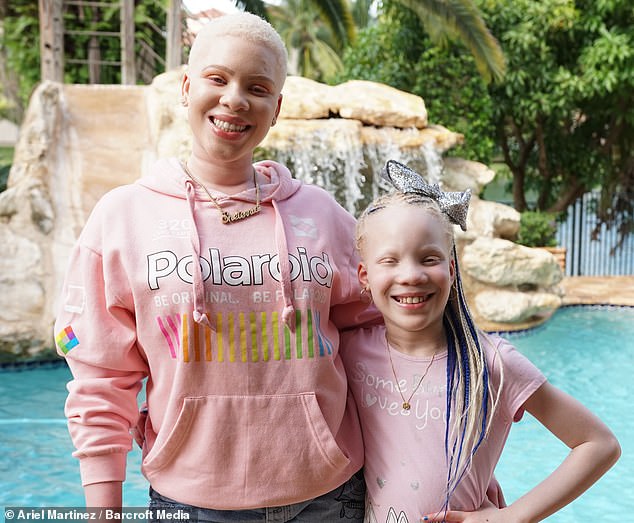 Helpful: ‘I think that I’ve helped my sister cope with having albinism because I’ve gone through all the hard times so I was able to educate her,’ Sheterria said 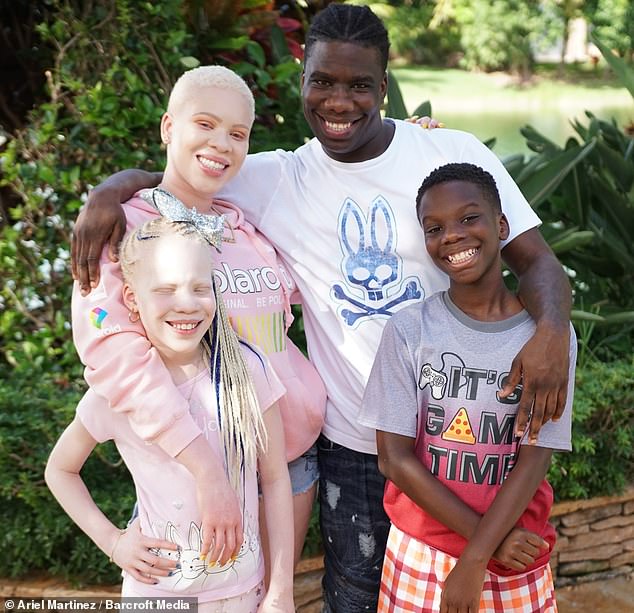 Family genetics: The combination of the parents’ genes appears to have a significantly increased chance of resulting in a child with the disorder. They also have an older son

‘My brother picked me up from school and we went to the hospital and everybody was quiet,’ she continued. ‘They took me to the NICU because they said one of the babies was in there.

‘I go to the window and when they opened the window, my sister was there and she had a head full of blonde hair like me. She looked just like me. I started crying. That was the best moment ever.’

Older brother, Terry Jr. said: ‘It was just a reincarnation of me and Sheterria. I’m the oldest and she’s under me so when I found out that Te’riq came out like me and She’riq had albinism it was like a whole me and Sheterria born again.’

While there’s no history of Albinism in Sherria or Terry Sr.’s family, the combination of their genes appears to have a significantly increased chance of resulting in a child with the disorder.

Dad Terry Sr., said: ‘We didn’t know one of the twins had albinism until She’riq was born. Looking at the doctors’ facial expressions was just amazing. It was shocking to all of them.’

Now nine, the twins are an inseparable team, with the calm and centered She’riq balancing out her more animated brother.

‘The twins have a wonderful relationship, I love their relationship and it kind of makes me wish I had a twin growing up,’ Mom Sherria said.

‘My daughter, She’riq, she’s very caring, very nurturing, kind of like me. And my son Te’riq is very outgoing, very funny like his dad.’

And while She’riq was potentially facing a much tougher upbringing than her brother, older sister Sheterria made sure her younger sister was prepared for what lay ahead.

The older Elliott sister had experienced her share of obstacles due to her condition and was keen to ensure her sister didn’t go through the same thing. 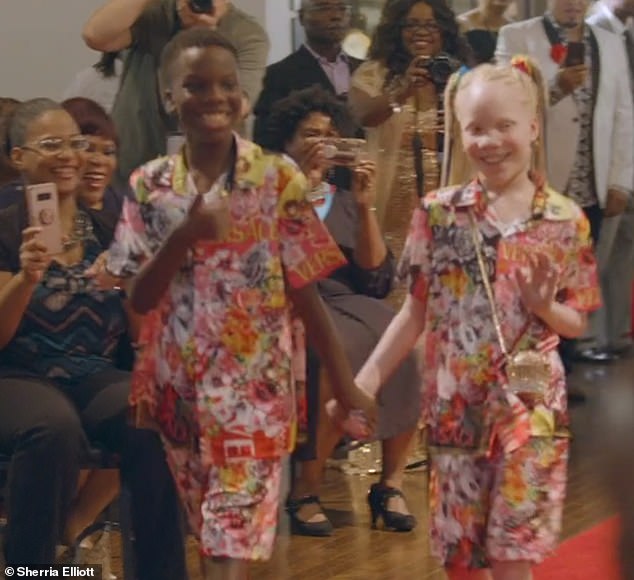 Tight-knit family: ‘The twins have a wonderful relationship, I love their relationship and it kind of makes me wish I had a twin growing up,’ Mom Sherria said 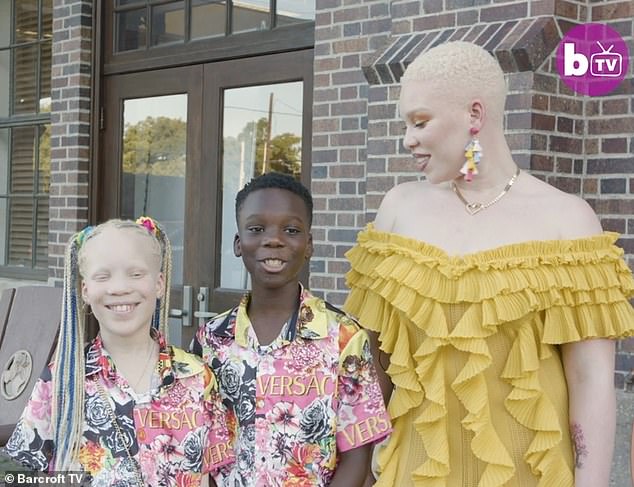 Incredible: Recently the twins and Sheterria were chosen to be part of an uplifting photo series called the ‘Skin I’m In’ project, which was exhibited in Houston, Texas 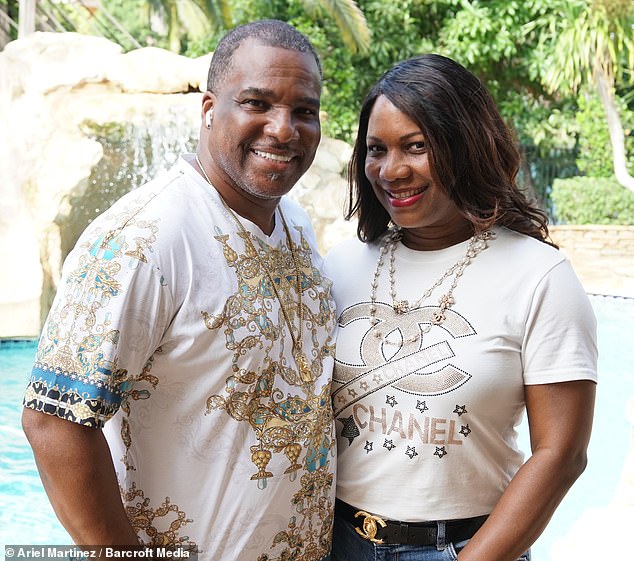 She recalled a particularly tough time as a young girl: ‘In pre-Kindergarten, we had to go to the high school that was across the street.

‘So we would walk to the high school to eat lunch and during that time, that’s where the kids were throwing food at me.

‘I was the lightest person in the school because it was an African American school. I was crying, bawling. I was like “mommy, I don’t understand why these kids are treating me like this.”‘

Experiences like this allowed Sheterria to understand how people reacted to Albinism out in the world, so she ensured her younger sister met any questions or judgement head-on.

‘My sister helped me with my albinism because she comforts me,’ She’riq said. ‘She helped me with talking to more people, because I used to be kind of shy. But now I just like to make friends.’

Meanwhile, Sheterria has now learned to overcome the negativity and embrace herself – modelling and launching her own eyelash extension company.

‘My eyebrows are blonde, my eyelashes are blonde, everything is blonde, and I used to hate that. I used to not be proud of who I used to see when I looked at the mirror. But now I look in the mirror and I’m like “yes, you cute.”‘

Recently the twins and Sheterria were chosen to be part of an uplifting photo series called the ‘Skin I’m In’ project, which was exhibited in Houston, Texas. 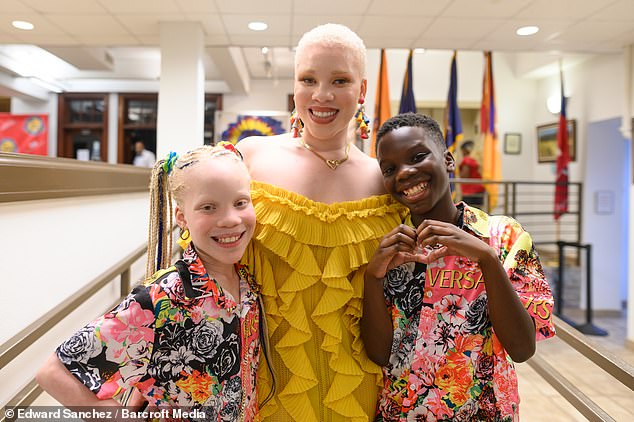 Happy: The family was proud to take part in the uplifting photo series together 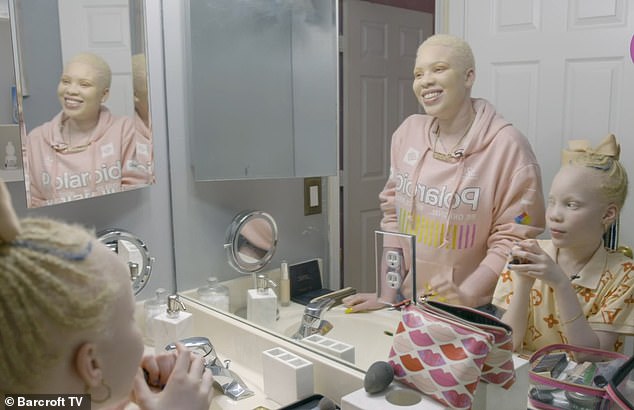 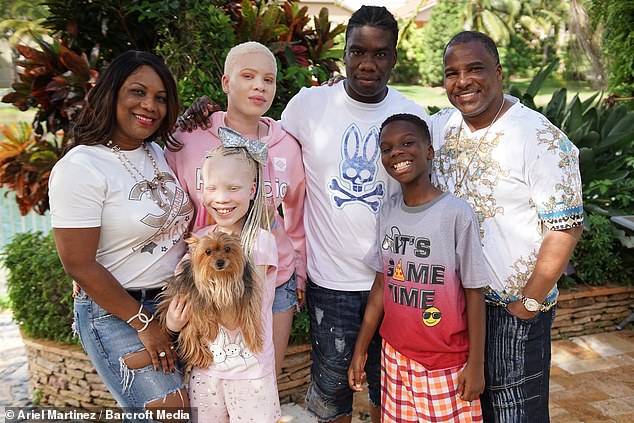 Unconditional love: ‘Every kid wants to look like mom and dad so we just had to teach them that this is how God made you,’ Sherria said. ‘We love you regardless, unconditionally’

Photographer Ferrell Phelps shot with numerous individuals with skin conditions in an attempt to, in his own words, ‘make a difference.’

Phelps, speaking at a gala event for the photo series in Houston, said: ‘I was looking for people of all different skin types, variations, ethnicities, and so forth, to be a part of a project.

After seeing their photos in the exhibition, the twins were clearly proud of sharing their unique look with others.

‘I never thought I’d be a part of something like this,’ She’riq said. ‘I think it’s really cool that Ferrell is doing this for people that have different kinds of skin.

‘I really like it because it can tell people that they’re beautiful the way they are.’

‘Just to see where they came from to now, not being able to look people in the eye because they want to look away because they don’t know what the person is saying to them or the person is pointing, wondering why their skin is different than ours.

‘Every kid wants to look like mom and dad so we just had to teach them that this is how God made you. We love you regardless, unconditionally, but until they learn to love themselves that was the key. And once they did that, I mean, it was like magic, like a blessing.’