Tiffany Trump has returned to New York City with her boyfriend Michael Boulos after speaking at the Republican National Convention in Washington, D.C. last week.

The 26-year-old law school graduate was seen out and about with her 23-year-old beau on Tuesday before her mother Marla Maples joined them outside what appeared to be Michael’s apartment building.

President Donald Trump‘s youngest daughter and the heir to the multibillion-dollar Nigerian conglomerate Boulos Enterprises both wore masks as they made their way through the crowded streets, but 56-year-old Marla did not. 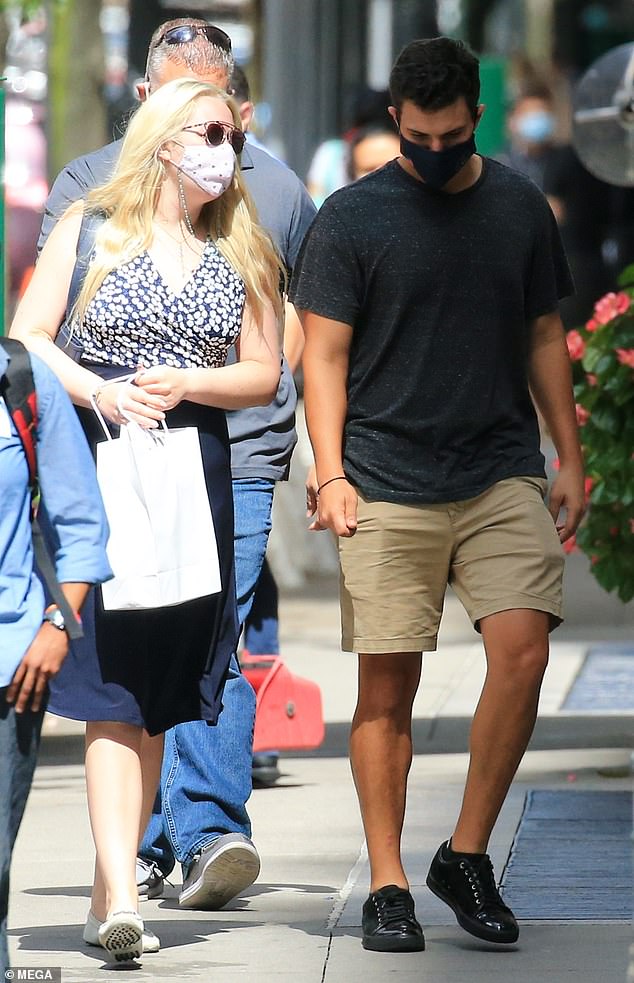 Out and about: Tiffany Trump, 26, and her boyfriend Michael Boulos, 23, were seen walking in New York City wearing protective face masks on Tuesday 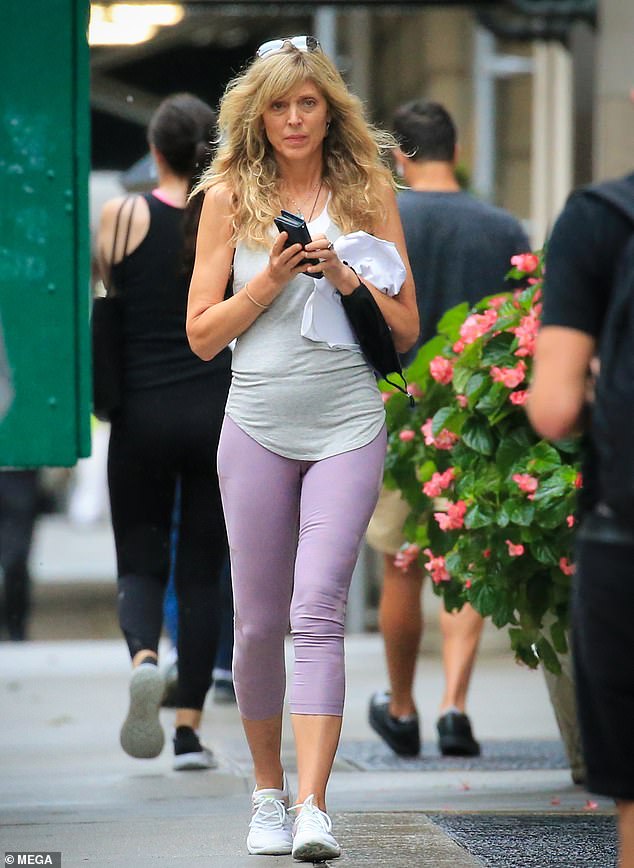 Risking it: Tiffany’s mother Marla Maples, 56, was laster seen walking to meet them sans mask, despite the crowded sidewalk

Tiffany beat the heat in a navy and white patterned wrap top and a matching navy midi skirt, which she paired with white leather loafers.

Unlike her older sister Ivanka, who has a tendency to match her protective face masks to her outfit, Tiffany wore a cheerful pink mask.

While the president has had a wavering stance on masks, both his daughters have been seen faithfully wearing them whenever they are in public.

Tiffany’s mask appeared to be connected to a neck strap to esnure she doesn’t lose it when she has to pull it down.

The lawyer-to-be topped off her look with a pair of pink sunglasses and handbag slung over her shoulder. She also carried a small white shopping bag.

Michael, meanwhile, was dressed casually in a slate gray T-shirt, khaki shorts, and black sneakers. His face mask was a basic black.

Outfit of the day: Tiffany beat the heat in a navy and white patterned wrap top and a matching navy midi skirt, which she paired with white leather loafers

The couple was seen leaving Tiffany’s New York apartment and walking to what seemed to be Michael’s place in the city.

Marla was later seen walking to the building by herself sans mask, despite the number of people on the crowded sidewalk.

The mother of one was dressed in a gray tank top, lilac purple leggings, and white sneakers. Her long blonde hair was in loose waves, and she had a pair of aviator sunglasses sitting on top of her head.

She topped off the sporty look with an aqua backpack purse and a silver necklace with a crystal charm.

Marla carried her cellphone in her hand and was looking at it as she made her way to the apartment building, where she met Michael outside.

She was seen talking to Michael underneath the building’s green awning as he used his T-shirt to wipe the sweat from his face. 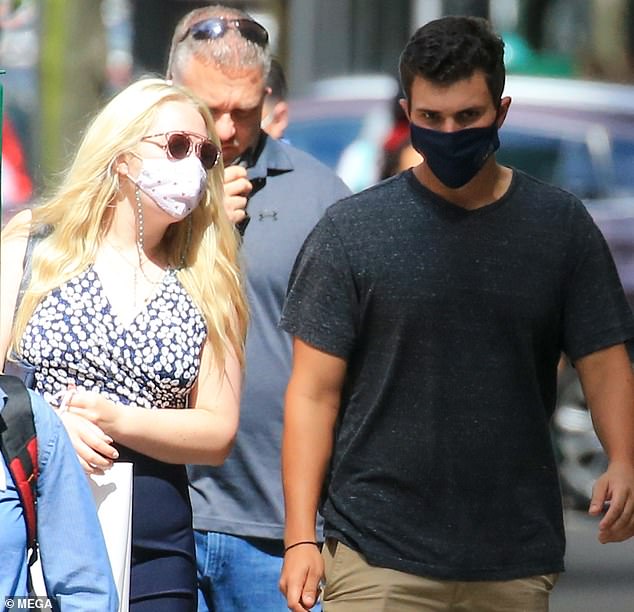 Strolling: Tiffany carried a small white shopping bag as she walked alongside Michael, who was dressed casually in a slate gray T-shirt, khaki shorts, and black sneakers 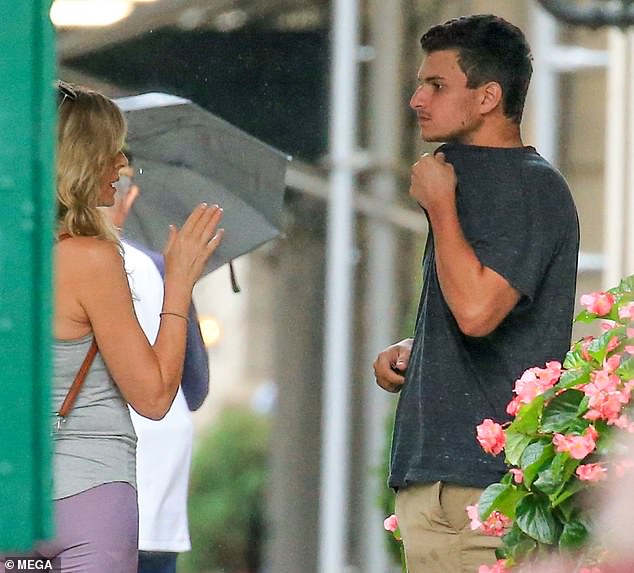 Catching up: Michael was later seen talking to Tiffany’s mother underneath the awning of what appeared to be his apartment building in New York 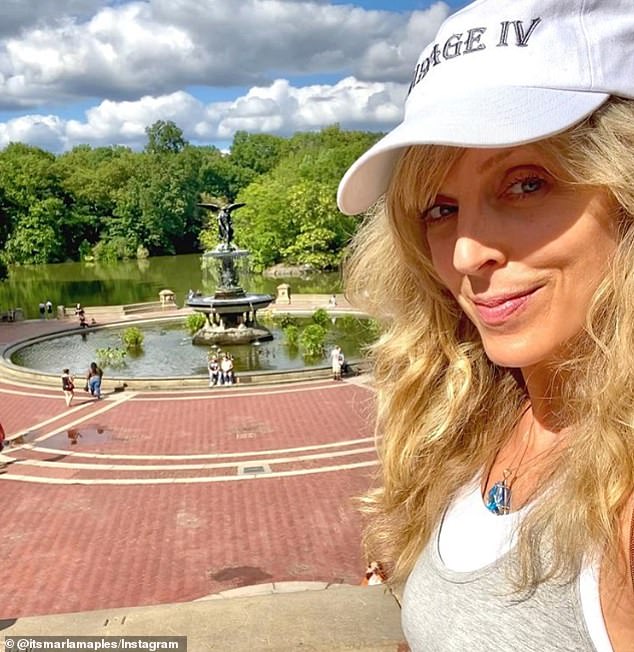 Timeline: Marla took to Instagram to share a selfie she took in Central Park, though it’s unclear if she snapped the photo before or after meeting her daughter and her boyfriend

Marla later took to Instagram to share a selfie she took in Central Park, though it’s unclear if she snapped the photo before or after meeting her daughter and her boyfriend.

‘On my bike ride home yesterday I had to stop for a moment and appreciate one of my favorite sites in the city, “The Angel of the Waters.” Created by Emma Stebbins, the first woman to receive a public art commission in NYC,’ she captioned the image.

‘I pray angels bless this city and bring healing just as at the Pool of Bethesda. I pray healing for hearts, minds and souls, and for those in physical distress … May God‘s perfect light embrace you and embrace all of us and inspire us to walk in peace together like never before.’

It seems that Tiffany has been in New York City for the entire week, and on Sunday, Marla posted a photo of herself cuddling with her daughter’s rescue cat Petals.

The image appeared to have been taken in Tiffany’s high-rise apartment.

Tiffany and Michael have had a long-distance relationship for the past three years as she attended law school at Georgetown University. 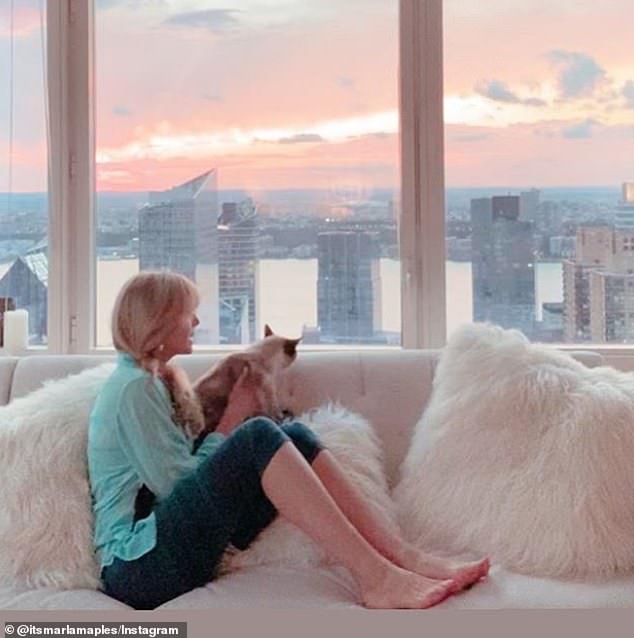 Sunset: It seems that Tiffany has been in New York City for the entire week, and on Sunday, Marla posted a photo of herself cuddling with her daughter’s rescue cat Petals 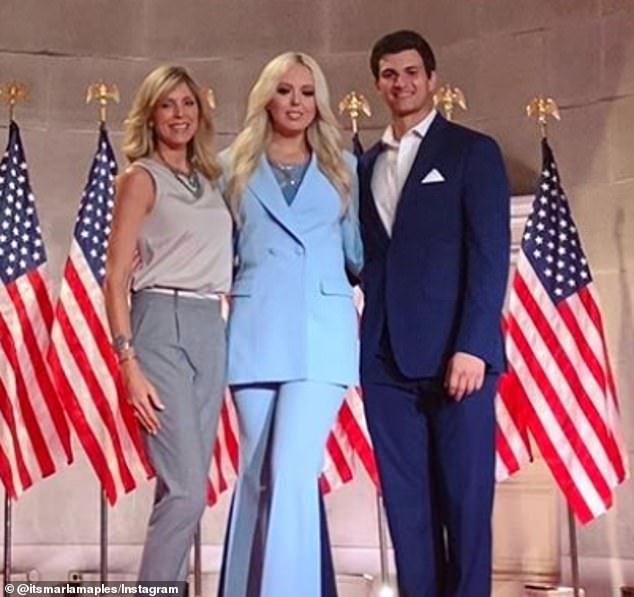 All together: Marla and Michael were both in Washington, D.C. to support Tiffany on the day of her speech at the Republican National Convention last week 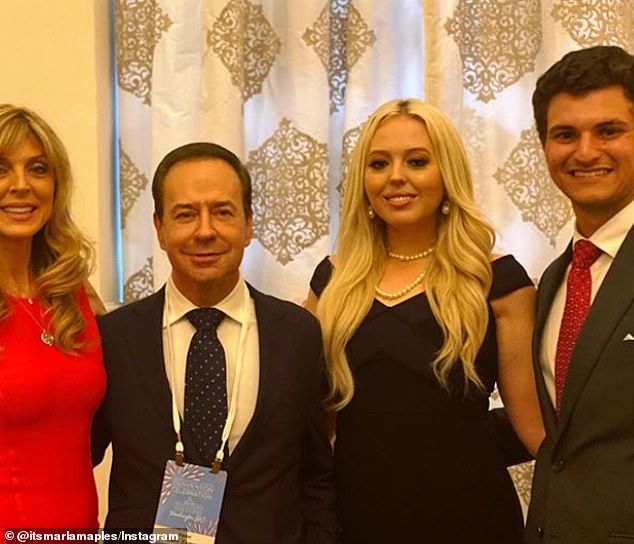 All smiles: Marla posted photos of them together to celebrate Michael’s 23rd birthday on August 27

Michael, who grew up in Nigeria, was previously based in London, and it’s unclear if he always had this apartment or recently acquired it after Tiffany graduated this spring.

For the most part, Tiffany has kept her private life private throughout her father’s presidency, and while she mentioned job-hunting in her RNC speech, she has yet to reveal where she plans on living or working now that she is done with school.

Tiffany can stay in New York with her mother and older half-brothers Don Jr. and Eric or live in D.C., where she will be close to her father, stepmother Melania, half-brother Barron, and half-sister Ivanka.

She would likely be welcome to join the family business as all three of her older siblings have done, with Ivanka later leaving the Trump Organization to work as a White House senior adviser.

Her father, who was impeached in late 2019, joked at the time of her law school graduation that a lawyer in the family is ‘just what I need.’

Tiffany has yet to disclose whether she plans on taking the bar exam, but her speech at the RNC suggests that she may take on a more prominent role in her father’s presidential campaign. 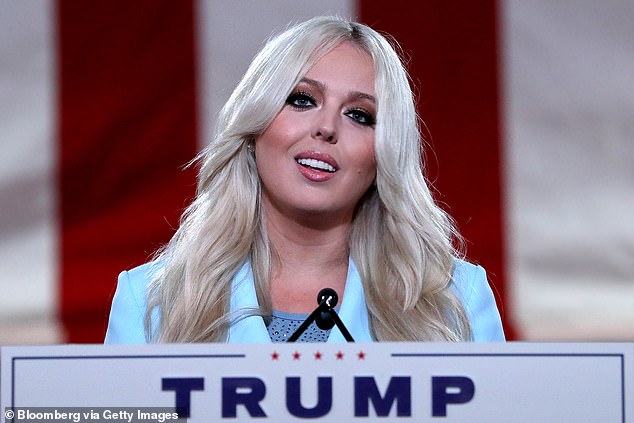 Words: In her speech, Tiffany railed against the media, the tech giants, and the education system, suggesting they keep the American people ‘mentally enslaved’ 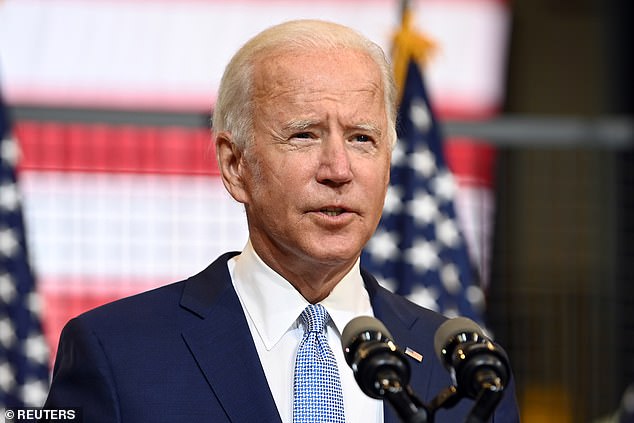 Taking a stance: On Monday, Tiffany slammed her father’s opponent Joe Biden after the Democrat said the president was ‘poisoning our very democracy’

Getting political: Tiffany told the Democratic hopeful to ‘stop lying’ in the rare political tweet

It was a rare appearance for his youngest daughter, who gave a well-received speech four years ago at the convention in Cleveland, Ohio, where she talked about her father in personal terms, showing a different side to the GOP nominee.

This time around, she took a cue from her father and older siblings and railed against the media, the tech giants, and the education system, suggesting they keep the American people ‘mentally enslaved.’

‘People must recognize that our thoughts, opinions, and even the choice of who we vote for are being manipulated and invisibly coerced by the media and tech giants,’ the Georgetown Law graduate said.

Likely speaking from experience, she said that in the academic arena, students with opposing viewpoints are ‘too afraid to speak,’ while the system promotes ‘groupthink.’

Both Marla and Michael were in D.C. to support Tiffany as she took the stage, and her mother later shared a photo of them together to celebrate Michael’s 23rd birthday on August 27.

Up until this week, Tiffany has largely avoided sharing political messages and attacks on her personal social media pages, but on Monday she slammed her father’s opponent Joe Biden after the Democrat accused the president of ‘poisoning our very democracy.’

Taking to Twitter, she wrote: ‘Please stop lying Joe. You may think we are too ignorant to see through the lies — but God knows the truth.’