Catwalk legend Naomi Campbell has taken to vlogging snippets into her daily life, and in her newest video she takes fans along on an refreshingly normal grocery shopping trip.

The London native, 49, might have an entourage, but she insists that she ‘needs’ to do her own grocery shopping as it’s ‘therapeutic’.

‘I can’t order them online. I need to choose my own fruit in case they come bruised. I need to see it with my own eyes,’ the covergirl told her YouTube subscribers in a video she published on Thursday. 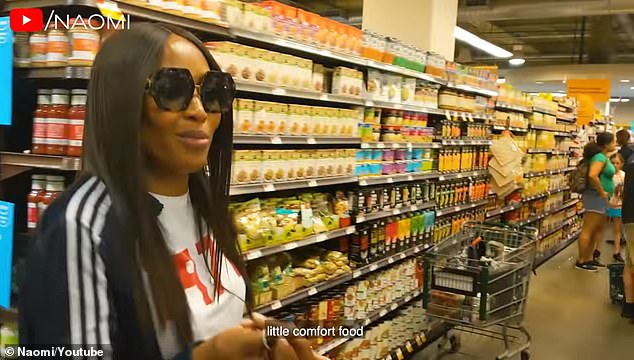 Staples: Naomi Campbell, 49, takes fans grocery shopping as she gets her head around her new restrictive eating plan 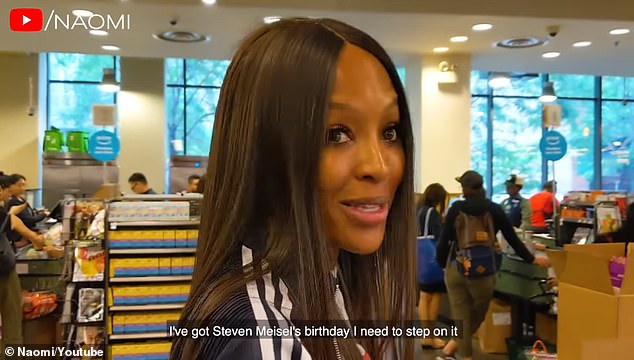 Rush: No time to waste in the aisles as Naomi flies around picking up her groceries

As bewildered onlookers watched the 5’10” beauty storm the aisles of Whole Foods (she later posed for selfies with shoppers), the model looked nonchalant as she picked up her reliable staples while flanked by her bodyguard Donald.

Revealing that she has recently been instructed to take up a ‘no gluten, no wheat, and no dairy’ diet, Naomi asked: ‘What the f**k am I going to eat?’

As she picked up her go-to fruits like ‘alkaline’ lemons, Japanese pears, and grapes, she groaned that she is trying to replace her penchant for candy with fresh produce.

‘Now that I’ve stopped smoking, I tend to want to pick up candy. I need to eat more fruit and not candy,’ she said, tossing pears in a bag.

She said that since she doesn’t drink alcohol and has no stopped smoking, though, it’s increasingly difficult to quit her only vice, candy and chocolate.

‘All I can do is dance,’ Naomi said, as she looked longingly at chocolate pastries and brioche.

While the camera filmed, she added Japanese pears, grapes, lemons, Mandarin oranges, peach, and basil to her cart. 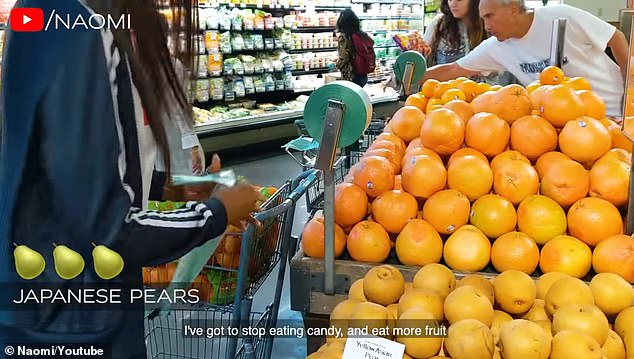 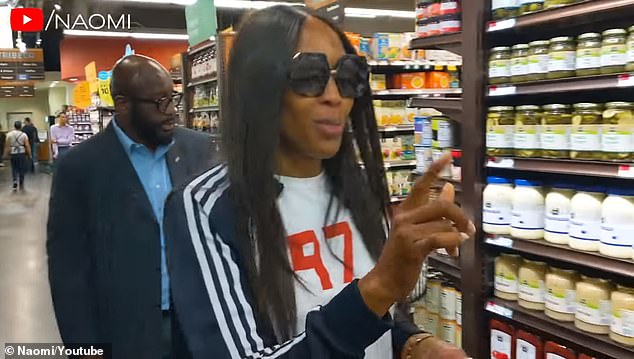 Spice queen: Naomi, pictured with bodyguard Donald, talks about her love for spice as she hits the condiments section

She also headed to the essential oils shelf, grabbing bottles of rosemary, bergamot, and clary sage to her cart.

At the salad bar, she filled up a container with spicy olives, saying: ‘All who know me know I love spice.’

And though she pointed to the hot sauce section as her favorite, she didn’t buy any on this trip.

‘We have hot sauce. Of course, my house without hot sauce?’ she said.

The supermodel, who previously said she has never dieted, seemed to dash around the health-focused supermarket dressed in a navy Adidas sports jacket.

‘I’m in a rush, it’s Steven Meisel’s birthday,’ she told the camera, referring to the Vogue-approved photographer.

As Naomi can no longer ‘munch on her favorite things’ while she watches ‘c***py TV’ due to her new eating plan, she now has to rely on things like flavored non-daity coconut yogurts, raisins, and nuts.

‘I find this part tedious,’ she said as she shoveled cashews and walnuts into a compostable bag. 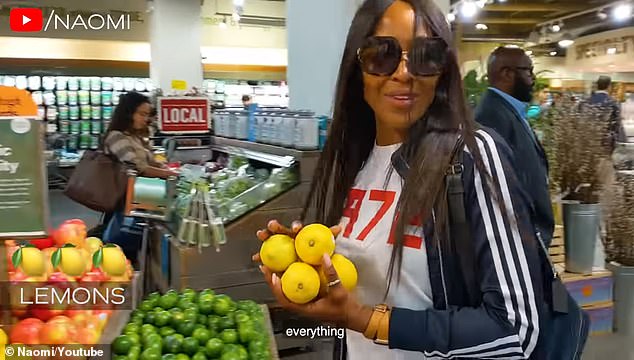 Favorite: Naomi said she puts ‘alkaline’ lemons on everything 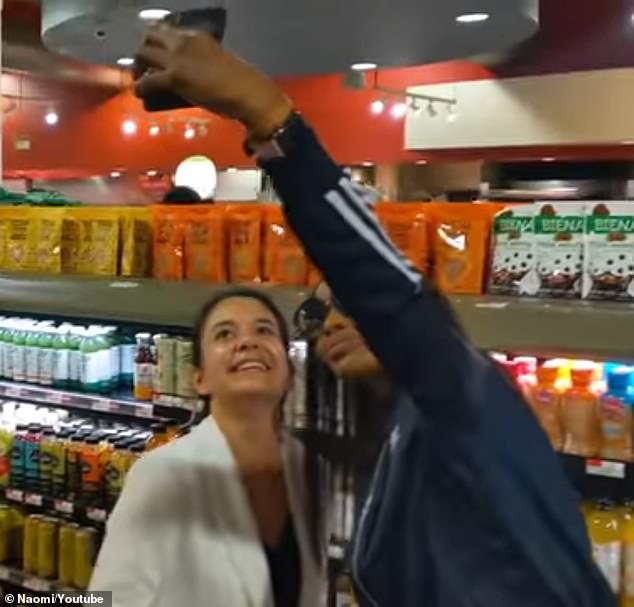 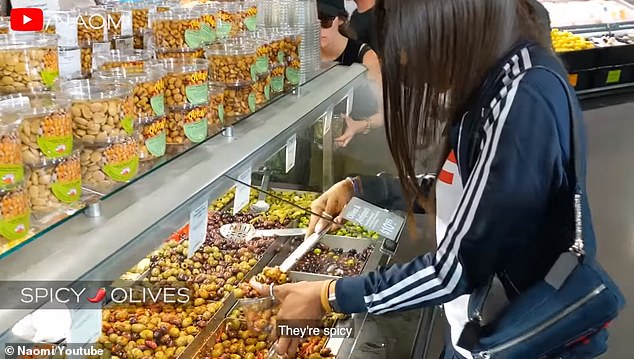 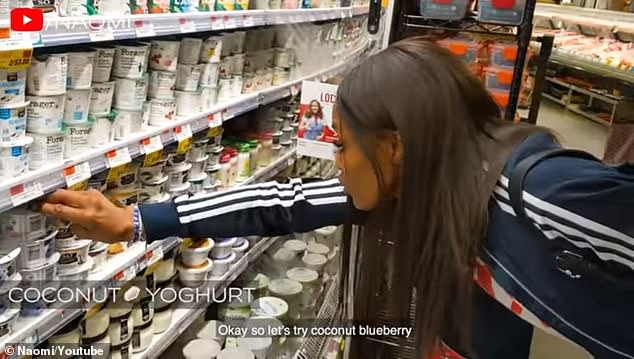 She did, however, grab a few sweet things, adding that lemon and chocolate cookies are her favorites — but she can only do gluten-free.

Evidently a woman of the people, she snapped up some Swedish Fish jellies for the aforementioned bodyguard Donald to ‘have in the car.’

In a viral video that launched on her ‘Being Naomi’ YouTube series this week, the model gave insight into her extensive in-flight beauty routine. The video has racked up almost one million views in less than a week.

Naomi, who stormed the catwalk in a rare runway appearance for Valentino recently, revealed that she travels with a surgical mask, disposable gloves, a seat cover and anti-bacterial wipes to avoid coming into contact with germs.

‘This is what I do on every plane I get on,’ she explains. ‘I do not care what people think of me. It’s my health and it makes me feel better.’ 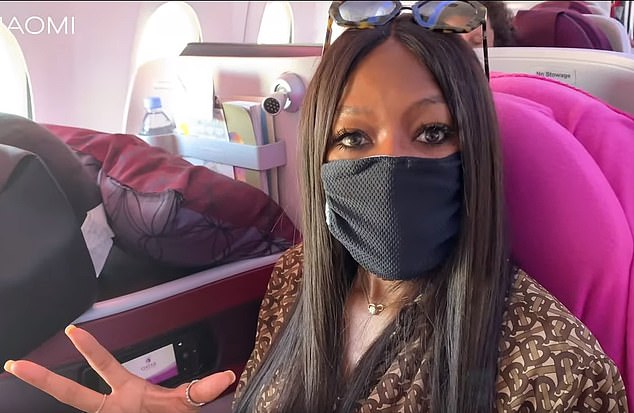 First class: On her YouTube channel, Naomi showed fans how she avoids germs while traveling

Ahead of turning 50, Naomi recently told an interviewer that she eats only when she feels like it.

‘It can be more than one day [that I don’t eat]. I eat when I feel like it. I don’t starve myself,’ she told showbiz journalist Dan Wootton on Lorraine. 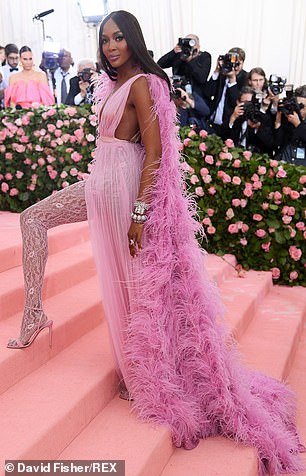 ‘If I want to do a day of just not eating, I do it, and just do water or juice. In the heat sometimes I don’t, I just want to do juice, it’s too hot,’ she added.

The workout fanatic also spoke candidly about her pledge to support British TV host Lorraine Kelly’s ‘Lorraine’s Change + Check campaign’, encouraging women to regularly check their breasts as her own mother, Valerie Morris, is in remission.

‘She’s been open in speaking about her breast cancer surviving and being in remission from cancer,’ Naomi said of Valerie, 67.

‘I’ve always believed that’s something you have to share as you help other people to come out.’

‘I believe when you hold things in you create a sickness. I’m really proud of her for that.’