Edd Kimber sounds bemused that he gets emails from PhD students hoping he can help with their theses on the cultural significance of The Great British Bake Off. His qualification, of course, is that he was the very first winner.

Ten years ago the unassuming bank debt collector from Bradford signed up for a brand new, low-key show on BBC2. He won, ditched the debt collecting and has just finished his fourth recipe book.

It’s fitting that we catch up with Edd just as the Covid crisis has had us all dashing to our ovens. And, he says, you don’t need a PhD to understand why.

‘It’s about the joy of making something yourself, of transforming butter, sugar and flour into a million different recipes.

‘Plus, it’s an escape. You can almost turn your mind off. And you can do it with kids.’ 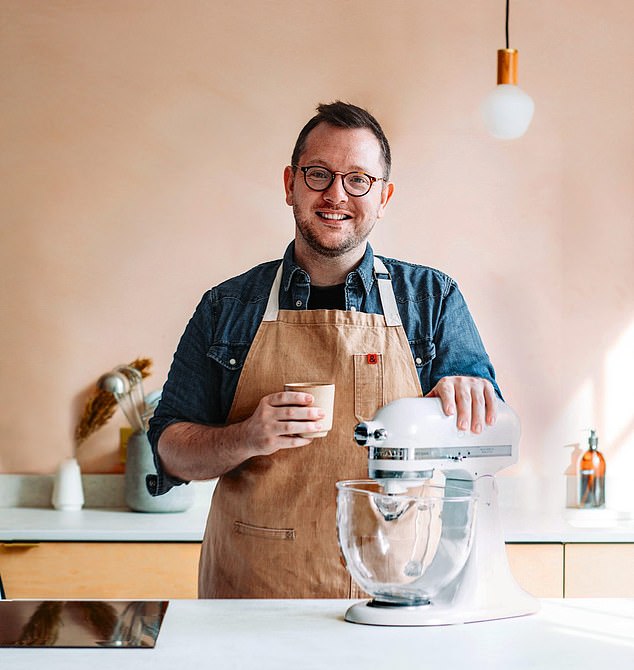 Edd Kimber (pictured) from Bradford, who was the very first winner of The Great British Bake Off, reflected on his time on the BBC2 show

Much of his own work (he contributes to several foodie magazines and is a regular at food shows) dried up during lockdown, and he wasn’t sure it was the right time to bring out a new book about baking.

I’d suggest his timing is unintentionally brilliant. The new book, One Tin Bakes, is out now –cleverly, every recipe is baked in a 23cm x 33cm pan, which he says is the most versatile one you’ll find.

‘People always tell me they get put off because they don’t have a particular tin. I wanted to show you can do 70 recipes in the same tin, and adapt your own recipes too.’

The bakes range from a simple vanilla sheet cake to an ambitious pistachio crème brûlée tart with honey-roasted apricots.

‘Some of the recipes are very easy,’ he says. ‘Others are for the more adventurous.’

It’s interesting how this Bake Off winner managed to create a career for himself when there was no blueprint. ‘If you win now it’s almost inevitable you’ll do a book,’ he says. ‘But I had no expectations beyond wanting a career in baking.’

Edd was rather adrift when he signed up for a show no one had heard of. Aged 24, he had a politics degree but drifted into working in a bank’s legal department – a job he hated. 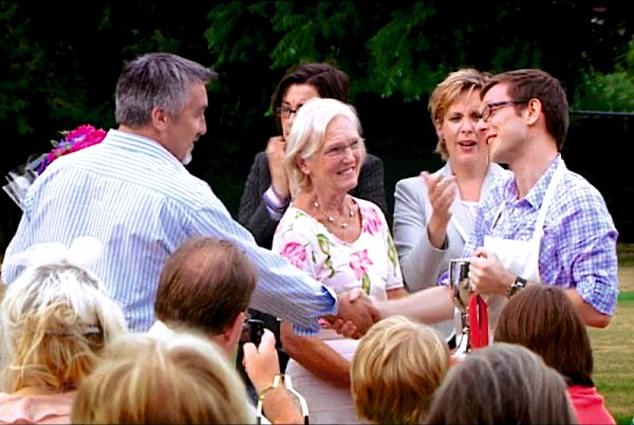 Former bank debt collector Edd, explained that he had always had a passion for baking and over the years Bake Off has become more about personalities than the history of bakes. Pictured: Edd winning the inaugural Bake Off trophy in 2010

Baking was his passion, but he’d been rejected for a place on a catering course. Then along came this niche show about baking.

Remember the early Bake Offs with their (dare we say it) boring historical bits, tracing the origins of baked goods? It was very BBC2.

‘It was commissioned by the BBC documentary people,’ says Edd, ‘which is why the historical bits were there. Over the years it’s become more about personalities.’

Doesn’t he feel peeved that those who came after him have enjoyed more of that side? Nadiya Hussain has her own TV shows – about travel as well as cookery.

‘She has magnetism,’ he says. ‘I don’t think I’ve got the exuberant personality for certain types of TV.’

He says he does ‘keep an eye on’ the show now, but doesn’t watch it addictively. ‘It’s hard when you’ve been on it.’

So does he still see Mary, Paul et al? ‘I used to, but I haven’t seen any of the presenters or judges now for years. I have nice memories and I’ll always be grateful, but how many people have been through it since with them? Hundreds, maybe.’

Recently, it emerged that filming was halted in the very first episode as presenters Sue Perkins and Mel Giedroyc were uncomfortable with the ‘unkind’ approach. 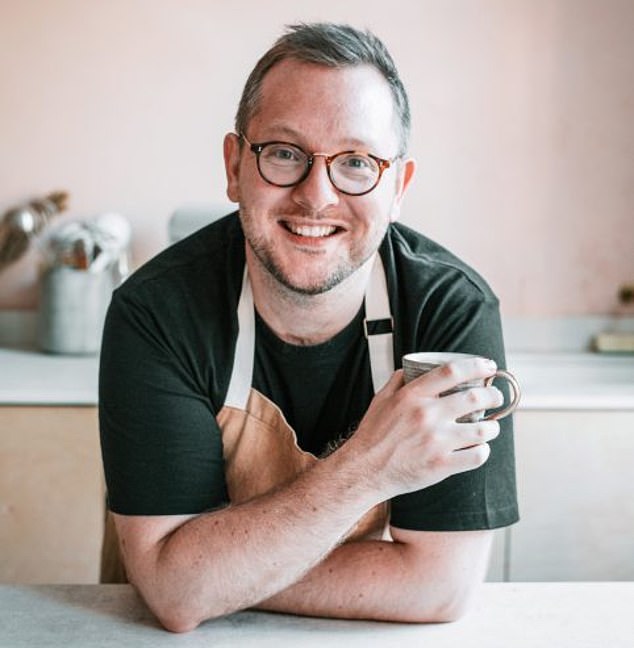 Edd (pictured) and his partner of four years, a lawyer, have spent lockdown eating more of his baking than usual

‘We resigned, basically, because they were pointing cameras in the bakers’ faces and saying, “Tell us about your dead gran,”’ revealed Sue. ‘We had stiff words.’

‘I didn’t know what it was about at the time. I don’t recall it being nasty or antagonistic, but I do remember production stopping momentarily. I think it was the best decision, because otherwise it just wouldn’t have been the same.’

Life flipped for him after Bake Off. A stint working at Raymond Blanc’s Manoir aux Quat’Saisons near Oxford increased his confidence, and he’s found personal happiness.

For the past four years he’s been with his partner, a lawyer, and in lockdown they’ve both been eating more of Edd’s baking than usual.

‘Normally I’d have meetings and take cakes to them. Or I’d see friends.’ The staff of a local restaurant have benefited, and friends and neighbours have found random treats on their doorstep.

A home-baked cake, says Edd, will always be received with a smile. ‘When someone has taken the time and the effort to make something, it feels special.’