He became the most adored cat in Britain when the real-life story of his friendship with busker and recovering drug addict James Bowen was told in the 2012 bestseller A Street Cat Named Bob. Now, after the success of the 2016 film, the sequel is here.

A Christmas Gift From Bob, which again stars Luke Treadaway as James and Bob as himself, follows their last Christmas on the streets and sees animal welfare officers trying to take Bob away from James. Bob tragically died in a road accident in June, but the film will remind us all of the true spirit of Christmas. Lisa Sewards has all you need to know…

HOW IT ALL BEGAN 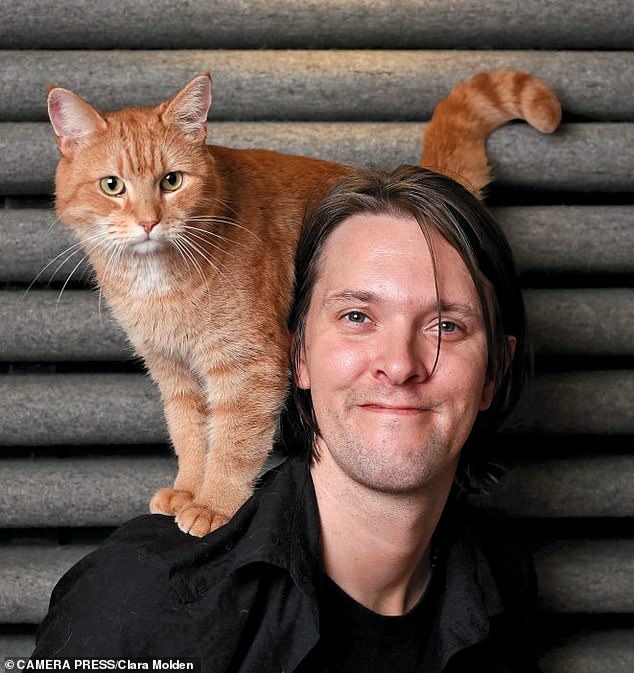 James found Bob injured and abandoned in the hallway of his sheltered accommodation in London when he was enrolled on a methadone programme to wean himself off heroin, and spent his last £30 on a visit to the animal hospital.

‘Bob had an abscess on his leg,’ recalls James, now 41. ‘When he was well again I thought he would find his natural way home. But I’d go to busk at Covent Garden, and when I got back he’d be waiting on the doorstep.

‘Then one day he followed me to work and stayed there all day. It was extraordinary. Taking care of Bob was like having a child. It gave me responsibility and the reason to sort my life out.’ 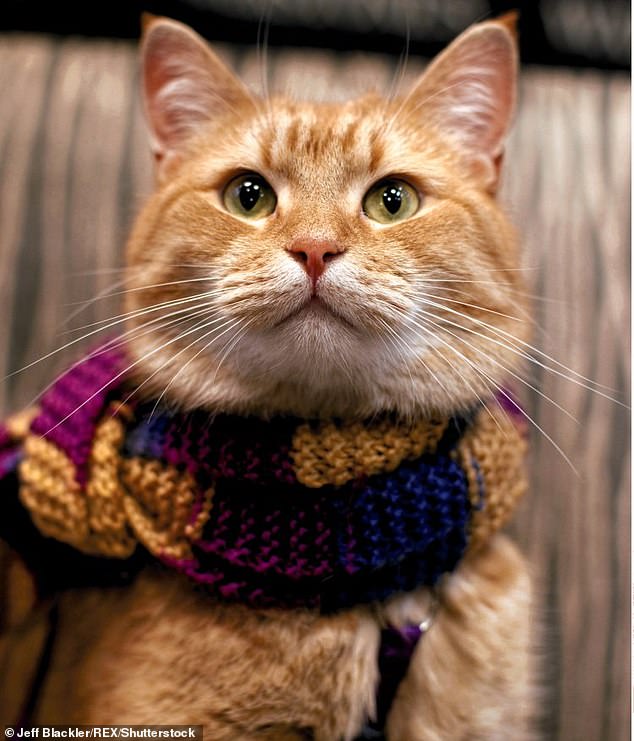 James and Bob became a popular sight around Covent Garden, where passers-by were beguiled by the sight of the cat, often wearing a knitted scarf, sitting next to James on the bustling streets.

‘Bob loved wearing clothes,’ says James. ‘It started with a baby scarf I wrapped around his neck one day when he was cold. Then someone bought him a Santa Claus outfit. In the end he had three suitcases full of scarves. But it was his high-fives that he was most famous for – he thought he was a person.’

In 2010, a literary agent who had heard their story suggested James publish a book with writer Garry Jenkins, and in 2012 A Street Cat Named Bob – the first of eight Bob books – came out. With the sequels, more than eight million books have been sold in 40 languages.

THE STAR OF THE SHOW 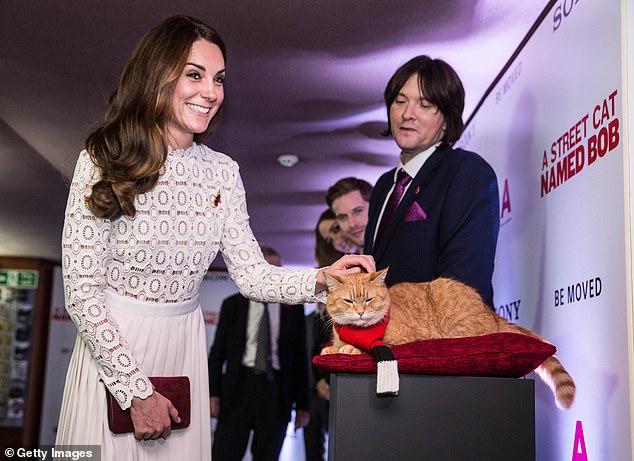 Fake snow is falling and all eyes are on the ginger cat with emerald eyes sporting a Santa Claus cape. Bob is ready to face the hundreds of fans waiting for him, gathered around a Christmas tree in Covent Garden where he and James found fame.

Bob steps onto Luke Treadaway’s shoulders and the cameras roll…

For the first film producers got Bob doubles, cats trained to act, but they underestimated the star power of the real deal.

‘I brought him in to do some photos one day when Luke was pretending to busk,’ says James, ‘and when the extras gave him their change, Bob looked up as if to say, “Thank you.”

So the producers said, “We’re going to need the real Bob.” All the other cats were terrified of crowds but Bob loved the limelight and knew he was being filmed.’

The Duchess of Cambridge came to the premiere of the first film and even gave Bob a stroke. Three fake Bobs join the real one in the new film.

Bob was unfazed by promotional trips for the first film to Norway, France, Germany, Belgium, Portugal and even Japan.

‘He went all around the world,’ says James. ‘We even stayed in the Ritz-Carlton in Tokyo in a corner suite on the 50th floor. But wherever we went, as soon as we got to the hotel room, the first thing he would do was to check the bathroom to see if they had put a litter tray in there.’ 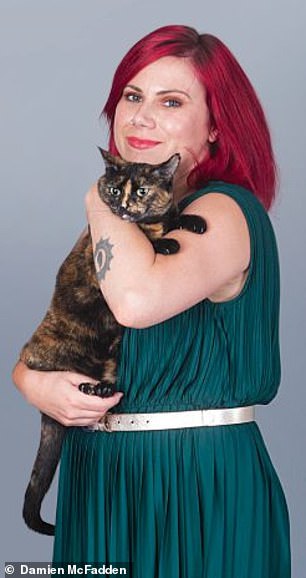 After Bob’s death, watching the film will be bittersweet for James. ‘It’ll be emotional seeing him again on screen,’ he says. ‘Everything I do now will be about celebrating his life.’

Bob was due to be the ring bearer when James marries fiancée Monika Hertes. Even her female tortoiseshell cat, Madame de Pompadour (Pom Pom) has mourned him, sitting by the window at their Surrey home waiting for him to return.

But James says Bob’s spirit is with him – he’s felt the brush of his tail on his leg and seen a flash of ginger going upstairs.

James and Monika have now adopted two rescue kittens, Bandit and Gizmo. ‘They’ve helped me a lot, especially in these strange times,’ he says.

THE LEGACY LIVES ON

James continues to raise funds for homeless and cat charities, and fans have launched a petition for a statue, possibly in Covent Garden.

‘The council have given the green light for a site,’ says James. ‘We’re looking to get a sculptor to create a bronze of him which we’re hoping will be ready to be unveiled next summer, on the first anniversary of his passing.

‘I really hope it’ll happen so people can pay their respects. Bob taught us so much about friendship and the value of looking out for each other. As my character says in this new film,

A Christmas Gift From Bob can be rented now from video on demand services such as Virgin and Amazon.