An artist who was born with a birth defect that left him without arms has told how how he was programmed to use his feet from birth.

Tom Yendell, from Hampshire, who has been painting for 30 years, spoke to presenters Holly Willoughby and Phillip Schofield, who explained his mother had taken Thalidomide, a morning sickness drug which had devastating side-effects for many at the time.

However, Tom, who was born with birth defects as a result, insisted that we are all born with the ability to use our feet more than we do.

‘My mum always tells the story of when she came into the maternity ward to see me for the first time and lent over my crib,’ he said. ‘She had a scarf round her neck and i naturally pulled it with my feet. We’re all born with this ability – it’s called the post natal grip – it’s the monkey in us really – that enables us to use our feet to do things.’ 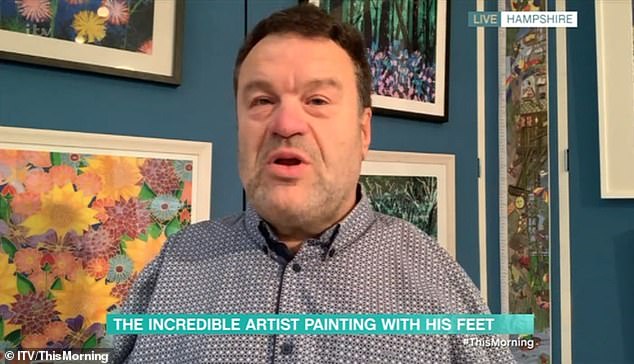 Tom Yendell (pictured), from Hampshire, who has been painting for 30 years, spoke to presenters Holly Willoughby and Phillip Schofield, who explained his mother had taken Thalidomide, a morning sickness drug which had devastating side-effects for many at the time. 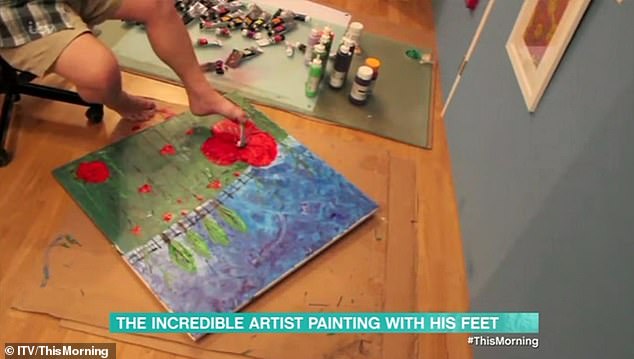 Tom insists that from the second he was born, he was inter-programmed into using his feet. Pictured, creating a piece of artwork

He added: ‘It’s just that I’ve carried on to do things. Feet are fantastic things really. We don’t use them enough.’

During the interview via video link, Tom told how he’s no different from any able-bodied artist, but just had to adapt.

‘I learned when I was three and four really to use my feet and my mouth and my chin to do the every day things you do with your hands,’ he said. ‘It came naturally to me because I was born with no arms so I’ve seen no difference.

When he was younger Tom explains how he tried different prosthetics but didn’t get on with them at all. 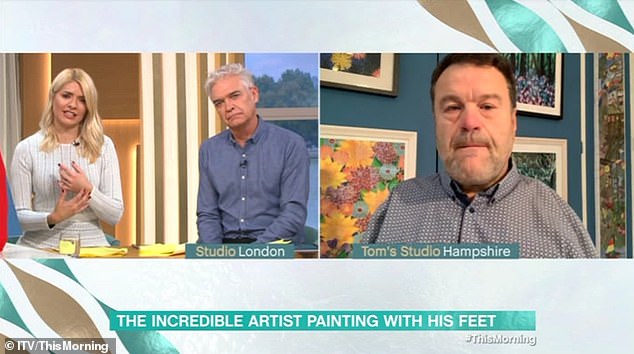 Tom, who is one of just 466 babies out of 2,000 to survive the effects of Thalidomide, told how he’s left footed (pictured)

‘I think as a society there was such an outcry of what happened to our generation, they started fitting us with lots of arms and legs and things,’ he explained.

‘I had gas-powered arms from a very early age but they infuriated me because I could do everything with my feet. I couldn’t see the sense in wearing them really.’

Tom, who has since been selected to paint a Christmas card for NFPA – a group of mouth and foot painting artists – then threw himself into art where his talent has been most shown over the years.

The artist, who is one of just 466 babies out of 2,000 to survive the effects of Thalidomide, explained: ‘I am not ambidextrous. I was born with six toes on my right foot so my right foot isn’t that good.

‘I’m left footed. I’ve been a mouth painter for most of my life, it’s only in the last two years I’ve gone back to painting with my feet again and I find my feet much more free.’

Thalidomide was originally prescribed as a ‘wonder drug’ for morning sickness, headaches, coughs, insomnia and colds.

Thalidomide babies often suffered missing or deformed limbs and extreme shortening of arms and legs, but the drug also caused malformations of the eyes and ears, genitals, heart, kidneys and digestive system.

By the time the drug was pulled from the market, more than 10,000 babies worldwide had been born with a range of disabilities caused by the drug.

The German company, the Grunenthal Group, which invented the drug has issued its first apology in 50 years to thousands of people born with disabilities in early September 2012.

The Grunenthal Group said in a statement it ‘regrets’ the consequences of the drug used to combat morning sickness which led to the birth of children without limbs during the 1950s and 1960s.

But British charity Thalidomide Agency UK, which represents victims of the drug in the UK, has rejected the apology as insufficient and demanded compensation.

Freddie Astbury, the charity’s head consultant, said Grunenthal needed to ‘put their money where their mouth is’ rather than simply express regret.