Australian tennis champion Jelena Dokic has proudly showed off her incredible body transformation after years of struggling with her fluctuating weight – and admitted the dangerous eating habits she formed after retirement.

The former World No. 4 slimmed down to her ‘playing weight’ of 67 kilos in 18 months through the use of the Jenny Craig program – but before she started it she had struggled with binge eating and over-training after weighing in at 120 kilograms.

‘I used to binge eat, then starve myself, over-train then under-train and then feel sad and guilty. It was a vicious cycle and most worryingly I didn’t love myself,’ Dokic said in her latest Instagram post.

The 37-year-old said her weight escalated after she was forced into retirement following an injury that abruptly ended her career in 2014.

But determined to turn her life around, she dramatically shed 53 kilos in 18 months, bringing the tennis star to her lowest weight in 10 years. 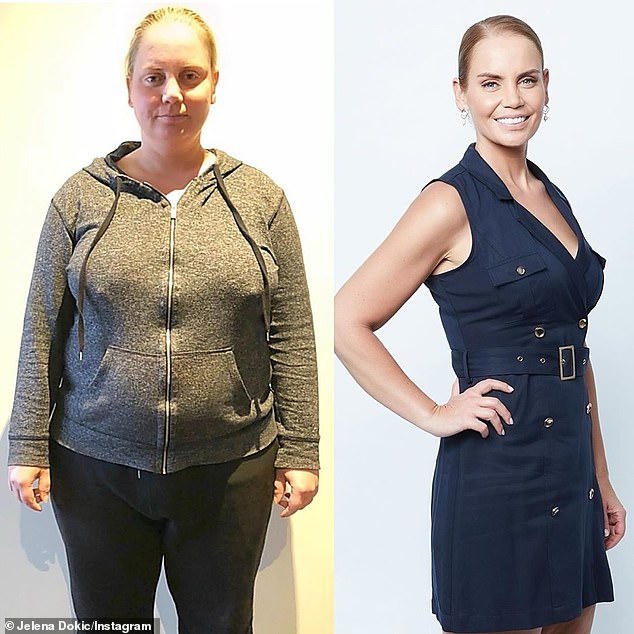 Before and after: Australian tennis champion Jelena Dokic has proudly showed off her incredible body transformation after years of struggling with her fluctuating weight (left at her heaviest at 120 kilos and right: 67 kilos after a 53-kilo weight loss within 18 months) 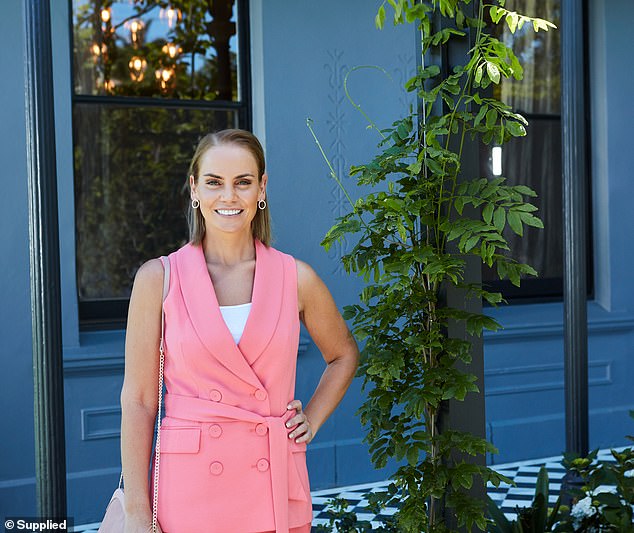 The former World No. 4 slimmed down to her ‘playing weight’ of 67 kilos in just 18 months after she tipped the scales at 120 kilos at her heaviest

‘Even though I have posted “before and after pictures” before and I have posted unflattering pictures of myself and my journey, it’s never easy to do it publicly,’ she said.

‘I think it’s also important to keep it honest and real and show the not-so-perfect images and stories sometimes. That’s the reality of life and we all have tough stories, battles and journeys and I am proud of mine.

‘I am not here to brag about how much weight I’ve lost. This is about my tough journey which I am still on and will be for a long time. It’s about the mental battle and the battle with myself and then it’s about the kilos.’

Dokic said she turned to junk food such as burgers, fries and sugary treats to cope with her emotions after announcing she was retiring from tennis.

But her turning point to lose weight once and for all came after she was struggling ‘immensely for a number of years’.

‘I just want to show that we all have our battles… This is firstly a mental battle then a physical one and it’s hard. The fight to get fitter and healthier starts with the head and the battle with yourself. I had many tough days and I still do,’ she explained. 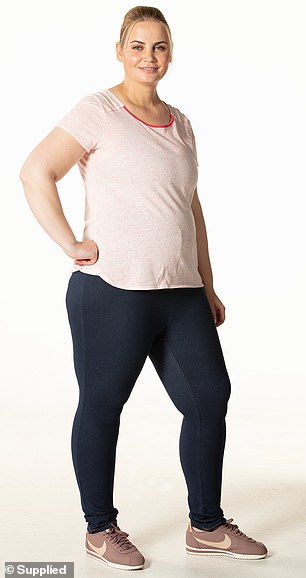 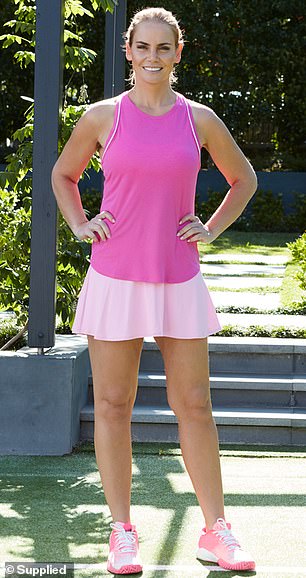 Earlier this year, the 37-year-old revealed she’s the ‘lightest’ she’s been in a decade after serving up an astonishing 53-kilo weight loss within 18 months

Sharing her words of inspiration to her fans, she wanted to encourage those struggling with their weight to find the strength to turn their life around.

‘You ask yourself if it’s all worth it, who am I and why am I doing this to myself and why can’t I find the solution and win this battle. It’s still hard to find the balance sometimes. But I fight, I believe and I don’t give up,’ Dokic said.

‘It doesn’t matter how many times you fall, it matters how many times you get up and try again. I just want to say that it’s not easy and trust me I know, but keep fighting. You will have highs and lows but just keep going. A day at a time.

‘Don’t sweat that burger or cake you had but keep going and keep striving to be the best, healthiest and fittest version of yourself. It’s all about balance and most importantly stay strong mentally and don’t stop loving yourself on the way.’ 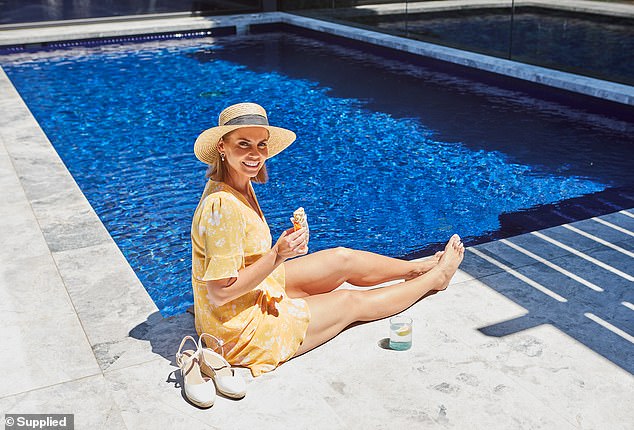 Dokic said there was not a ‘specific moment’ to lose weight, but it was something she ‘considered’ for a very long time 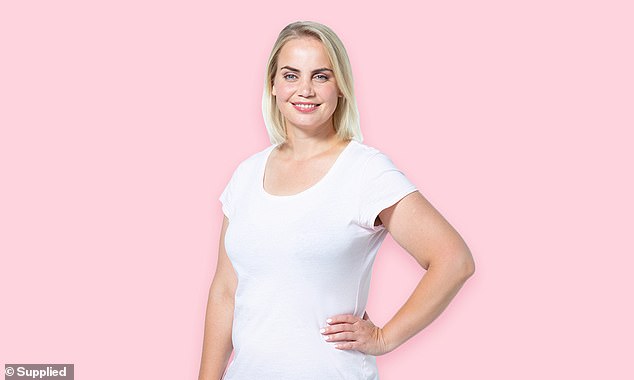 Dokic initially shed 21.6 kilos on her own but she was struggling to lose the stubborn 30 kilos. So she signed up to Jenny Craig where she was appointed as the ambassador for the program

Earlier this year, Dokic revealed she’s the ‘lightest’ she’s ever been in a decade.

‘I really do feel so much more confident in my own skin, which is a really nice and powerful feeling. Not only that, strong in myself that I can physically do things that I wasn’t able to do for a long time,’ she said in a Q&A interview with Jenny Craig.

‘I never thought in a little over 12 months, I would be where I am. I worked hard for it, day in and day out, it has its challenging moments, but it is so rewarding and now I want to empower others to do the same.’

Dokic said there was not a ‘specific moment’ to lose weight, but it was something she ‘considered’ for a very long time.

‘As a former professional athlete, I know what it feels like to be fit and healthy,’ she said.

‘However, after I was forced into retirement due to injury, I gained a lot of weight over a decade… I got to a point over the last 18 months where almost everything in my life was serving me well – my career, I had just released my autobiography and my relationship with my partner.

‘But there was something missing. I knew I wanted to feel like my old self again.’ 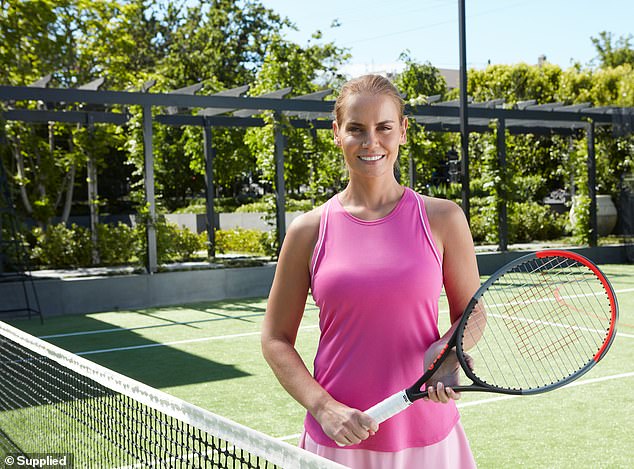 As she now feels happier and healthier more than ever, Dokic said her weight loss has had a positive impact on her lifestyle

Dokic initially shed 21.6 kilos on her own but she was struggling to lose the stubborn 30 kilos. And so she signed up to Jenny Craig where she was appointed as the ambassador for the weight loss program.

‘Almost a year on and I’ve never looked back. For me, the biggest thing was learning what my portions should look like. Education is a large component of the program,’ she said.

‘You really get to know what a portion looks like, and how to prepare serves of vegetables to accompany your meals.

‘If you do eat out, which is often a big part of people’s lives – socially, or in my case, professionally – your consultant supports you in making the right choices about menu items and what they should look like.

‘The program is more than just pre-packaged meals. It really does broaden your horizons in the way that you prepare food as well and the nutritional value it brings to your diet.’

Sharing her words of inspiration to her fans, she wanted to encourage those struggling with their weight to find the strength to turn their life around

As she now feels happier and healthier more than ever, Dokic said her weight loss has had a positive impact on her lifestyle.

‘It might sound small and superficial, but not having to worry about what I can wear,’ she said.

‘For years, I could barely wear anything that fitted me and didn’t feel confident to go shopping, which meant a lot of the time, I would miss out on work opportunities and socialising with friends and loved one because I felt so self-conscious.

‘I feel back to my old self again and confident to dress nicely. My work is so important to me and something I’m passionate about. I know now that I don’t have to turn down work or other commitments and I am more motivated.

‘I am running now, which is something I wasn’t able to do for a very long time. I also love summer, so I am really looking forward to being able to enjoy the holiday season like I haven’t been able to in such a long time.’

For any Australian concerned by an eating disorder or body image issue, please call the Butterfly National Helpline for confidential support at 1800 33 4673.