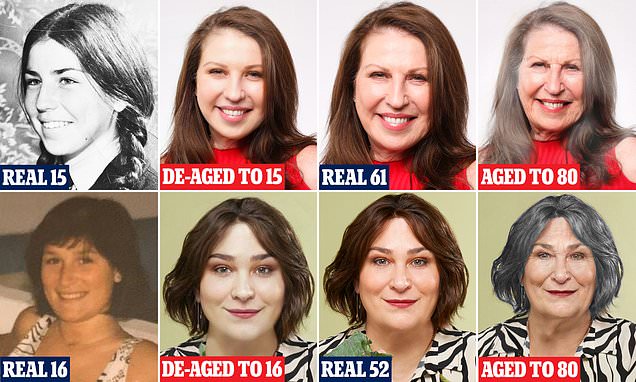 After De Niro is ‘de-aged’ in his new film, we used tech trickery on Mail stars and challenged them to… face your future (and past).

These pictures are the stuff of dreams . . . and nightmares. I could only fantasise about being that pretty when I was a teenager. It makes me look angelic, which as a tomboy I was not. Even then I had high cheekbones, which have been softened to give me a heart-shaped face and the hint of dimples. The de-ageing has also made my nose look smaller. Sadly I can attest that the Platell hooter made its unwanted appearance long before my 15th birthday.

And now for the nightmare of the ‘Benjamin Button’ treatment which ‘aged’ us all. First, I’d never go grey. My mum had her hair dyed honey blonde until the day she died at 90 and I intend to follow in her footsteps. In this image my eyes have disappeared into hard, disappointed, little currants. As for the creases across my nose, that’s a frowner’s face, and that’s not me.

I’m fairly content with the way I look now. With help from fillers and twice annual cosmetic procedures my face is not bad for my age. I don’t think I’d have a facelift. A tendency to see the sunny side of life means I’ll never look like that crumpled old bag in the picture.

Well, that’s a relief. This de-ageing lark is clearly rubbish, because the digital young me looks nothing like the real young me who, as you can see, was not nearly as ‘Instagrammable’ as the AI version. The 16- year-old me was not remotely polished. This person looks like something off the Disney Channel. Still, it gives me hope since it implies the aged version of me might also not be accurate. Which would be nice because she looks like a cross between Quentin Crisp and Cruella de Vil. The main worry is how stern I look. And the fact that I seem to have gone a bit orange. And the wrinkles. And the jowls. Oddly the grey hair doesn’t bother me so much: I think you get to a point when dyeing your hair dark actually makes you look older. At 52, I don’t feel too bad about my appearance but that has not always been the case. Stress, thyroid problems, illness and hair loss sapped my confidence in my 30s and 40s and it’s taken over two years to get myself back in any kind of shape. Maybe I’ll put a picture of the old bag on the fridge, a terrifying reminder of what awaits me if I don’t stick to the programme.

Andrew Pierce: Book me in for plastic surgery!

I was curious about the de-ageing technique in De Niro movie The Irishman. I’m adopted, so have no way of knowing if my blood family aged well or not. But I can’t stand the image of me as a teenager. I look like a girl — and much older than the 15 years I’m supposed to be. There is also one glaring omission from my youthful visage. I was stricken by acne from 14 to 25. The doctor recommended cabbage water. The result? The acne stayed but my carbon emissions went through the roof. But in this image my skin is baby smooth.

Gazing into the future is even more depressing. I’m more lined than an Ordnance Survey map. However, I draw comfort from the fact I still have hair. Six years ago mine was falling out. I invested in a treatment which involves a cocktail of vitamins and minerals being injected into the scalp, and with top-ups my barnet is still intact. Now and again I treat myself to a chemical peel, which smooths the surface of the face. But having peered into the future, perhaps I should consider more cosmetic treatments to prevent that age-old insult ‘he’s got a great face for radio’.

Yowzers! That was my first reaction to the picture of my future self. No one likes the thought of getting old, do they? Particularly when you end up looking like a gym bunny Tony Blair as I seem destined to.

But I’ve actually quite grown to like this image of my aged self. Offered the chance to look like that I’d probably take it. Mainly because the hairline’s held pretty steady, even if it is a bit Sven-Goran Eriksson.

It’s odd looking at the real picture of me as teenager and seeing how unhealthy I Iook. Weird because I barely touched alcohol then so I would have thought my skin would have been much clearer but it looks bloody awful. I assume that’s probably diet — I ate garbage then. So the de-aged pictured, with its baby-smooth skin, is too generous. That said, I don’t like it. It makes me look like something out of a boyband.

Looking to the future, my teeth are going slightly wonky with my advancing years, so I’d consider getting them straightened again.

Otherwise, I’m happy to see what nature has in store — and if I look like my aged picture at 80, so be it.