The 21-year-old, who is currently residing in Malibu with her parents after an idyllic European break, is at the helm of a diffusion line – TVF for DVF – which is now in its third season.

It’s her first venture into the wholesale market, having partnered with online luxury fashion retailer Net-a-Porter, and Talita said she relies heavily on 73-year-old Diane’s advice when it comes to business and distribution.

But Talita revealed she does not seek out her opinion when designing her own dresses – choosing to keep a distance due to their differing tastes. 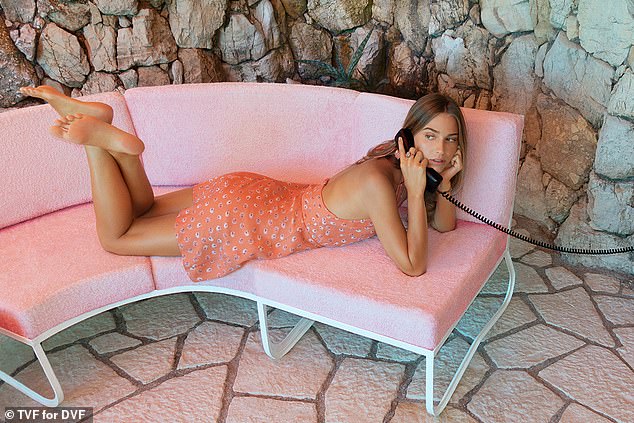 Fashion heiress Talita von Furstenberg has unveiled her chic new summer range – but admits she doesn’t discuss her design ideas with her famous grandmother Diane. Pictured modelling a playsuit from her new range

‘We try to be separate when I’m designing, just because I obviously value her opinion so much, but she designs for an older client and has a different taste to me, and I would hate for her opinion to alter the shape of the collection because ultimately the collection is supposed to reflect my more youthful taste,’ she told FEMAIL.

‘She always ends up liking it when I wear it, but when she sees it on the rack she’s like, “Oh this is horrible”.’

Talita added: ‘In everything else besides the design aspect, I rely on her opinion so much – she’s literally the best, most wise person to ask, so I really value her opinion on TVF branding, and on distribution now I’m going into the wholesale market.’ 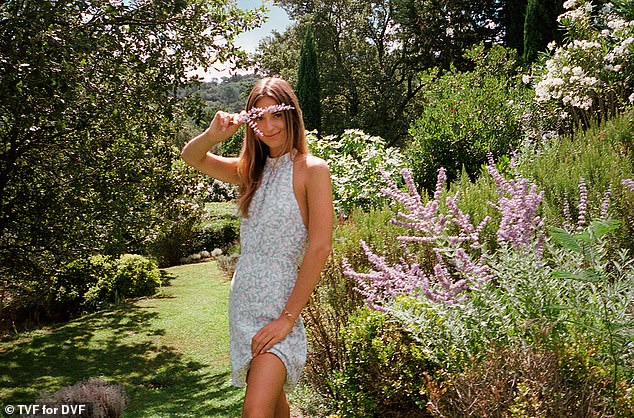 This line is Talita’s first venture into the wholesale market, having partnered with online luxury fashion retailer Net-a-Porter, and she said she relies heavily on her grandmother’s advice when it comes to business and distribution 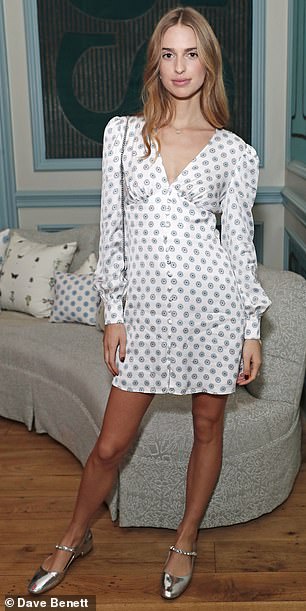 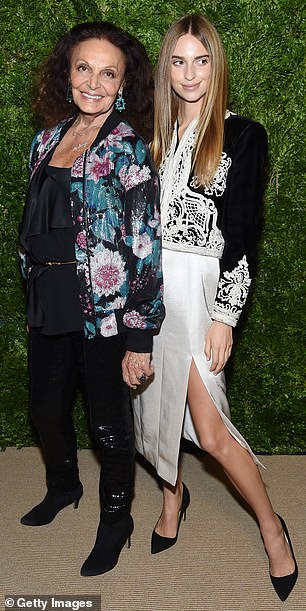 Talita von Furstenberg (left), daughter of Prince Alexander von Furstenberg and granddaughter of fashion designer Diane (right together), previous said she avoided using her royal title growing up in Los Angeles because she didn’t want people to ‘freak out’

Talita said it was designed with summer in mind, with the items named after her favourite desserts because ‘everyone likes something sweet’.

‘They’re the clothes you want to pull out of the closet to make memories in no matter where or who you’re with,’ she explained.

‘Most of the dresses – I love the Sundae as well as the Cupcake and Soufflé – they’re really versatile, you can throw them over a bikini and you can also wear them at night.’ 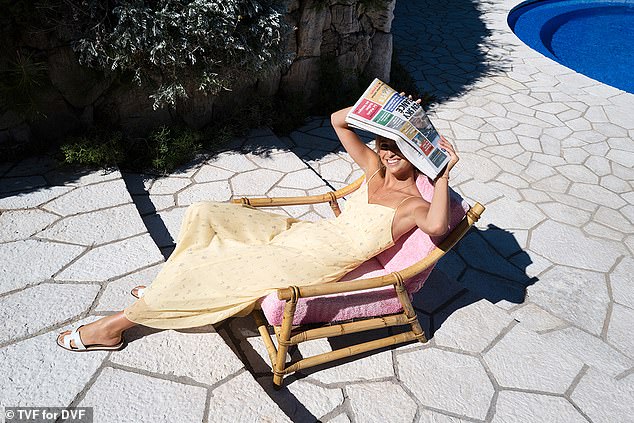 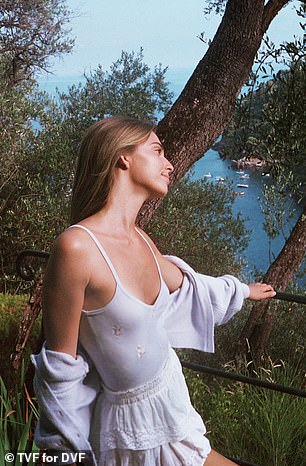 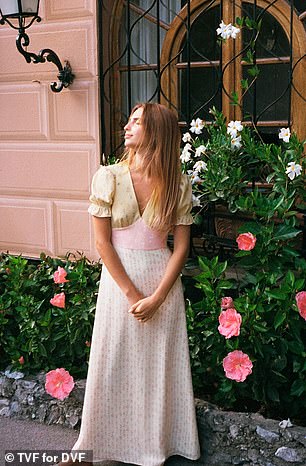 Her Belgian grandmother is best known for her iconic wrap dress, and Talita said she too is striving to create effortless frocks ‘that you can rely on’.

‘As my grandmother said, [it’s] a girl’s best friend in her closet,’ she explained. ‘Something you can always pull out and feel good and strong in, you feel confident and can rock it however you want to style it, a bunch of different ways, and have it for a while.

‘TVF is for the same type of woman as DVF, the strong, confident woman on the go, but she’s younger and she’s going to different places, so it’s dressing for a younger age.’ 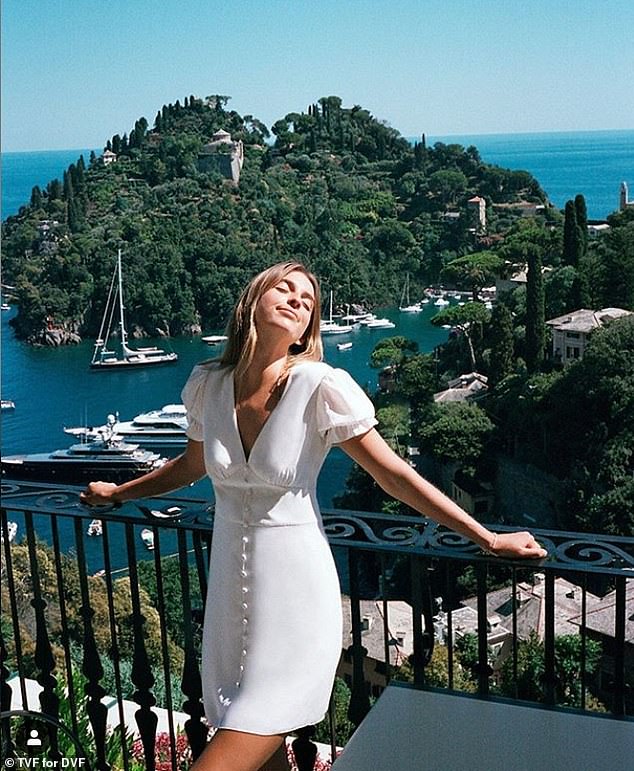 Talita said the collection was designed with summer in mind, with the items named after her favourite desserts because ‘everyone likes something sweet’

Her royal heritage comes from her grandfather, German aristocrat Prince Egon, who was married to Diane for 14 years. The fashion designer and the royal, who passed away in 2004, had two children during their marriage: Prince Alexander von Fürstenberg, Talita’s father, and Princess Tatiana von Fürstenberg. Diane has been married to businessman Barry Diller, 77, since 2001.

After inheriting her grandmother’s love of fashion, the rising style star is now following in the designer’s footsteps; she is being groomed to one day take over the Diane von Furstenberg business, with the designer calling her granddaughter her new ‘muse’.

Talita told FEMAIL doing so would be a real honour. ‘It’s a really special, strong DNA brand,’ she said. ‘I’m still learning and don’t want to take that position until I fully think I’m confident enough to do it, and I’m learning, that’s what TVF is.

‘Hopefully one day I can [take over] because DVF is a pretty extraordinary brand that’s one dress for so long and it’s still selling, so it’s a pretty crazy business model when you look into it. 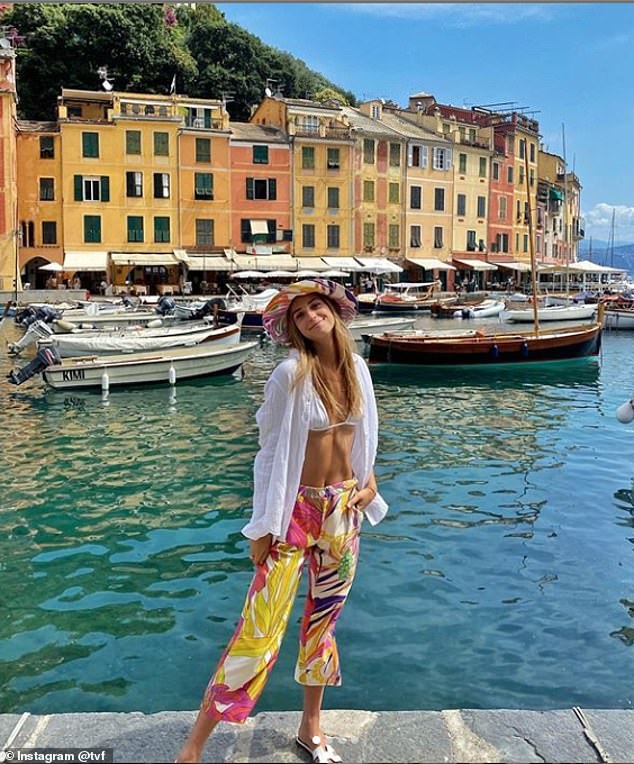 Talita, pictured on a recent European holiday, told FEMAIL it would be a real honour to take over the Diane von Furstenberg brand one day

‘All the DNA and history of the brand is really, it’s a really special brand. When I go into the archives and see all the dresses, I could pull out a dress and it could still be worn today, almost every single one of them.’

Having been raised in Los Angeles, Talita relocated to the East Coast in 2017, when she started attending Georgetown alongside her cousin, fellow royal Prince Alexios of Greece.

She and boyfriend Rocco Brignone, 19, were living in New York, where Talita is set to begin her final year at NYU, at the onset of the pandemic, and moved back to Malibu to stay with her parents.

The couple recently enjoyed a romantic getaway in Europe, travelling to the south of France before driving down to Portofino.

Talita said being together 24-7 in lockdown has been ‘challenging’, but has also made them stronger. 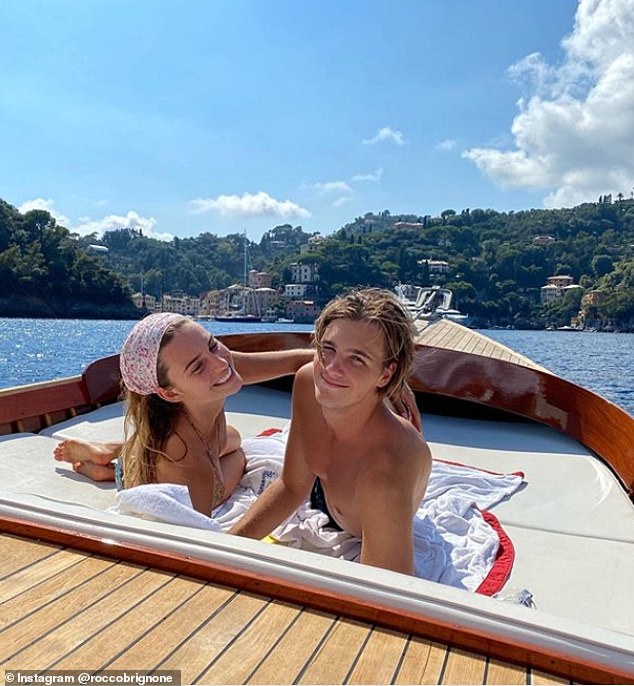 Talita and boyfriend Rocco Brignone, 19, recently enjoyed a romantic getaway in Europe, travelling to the south of France before driving down to Portofino (pictured)

‘It’s been fun for us, it’s definitely made us a lot closer and a lot more serious since we’ve literally been 24-7 together,’ she said – adding that wedding bells are ‘in the very distant future’ for the young couple.

She added that she’s essentially been in quarantine since returning to the States, observing that the threat of Covid-19 seems ‘a lot more serious’ in LA than it did in Europe.

‘I don’t go out in public really ever,’ she admitted. ‘But there’s a lot more cases in LA right now, and I’m also living with parents so have to take that into account, whereas when I was in Europe I wasn’t with an older person.’

Talita is often seen gracing the front rows of fashion shows or at society parties, and is often seen on exotic trips with her cousin and close friend, fellow glamorous royal socialite Princess Olympia of Greece.

When not hard at work, Talita is often seen gracing the front rows of fashion shows or at society parties. Pictured at Paris Fashion Week in February (left and right)

But she told FEMAIL she’s been enjoying a slower pace of life during lockdown, and has become ‘obsessed’ with meditation and daily yoga.

‘I’ve been really lucky, I’ve had a lot of outside space so it’s been really nice to be connected to nature and I think honestly I’ve decided to focus a lot more on self-growth,’ she said.

‘I’ve been meditating and doing yoga every day. I’m obsessed with meditation, I can’t start my day without it, it’s so great.

‘I’ve had a lot of self-reflection which has been great. This slowing down for everyone has in some way for me helped me a lot grow as an adult and as a person.’ 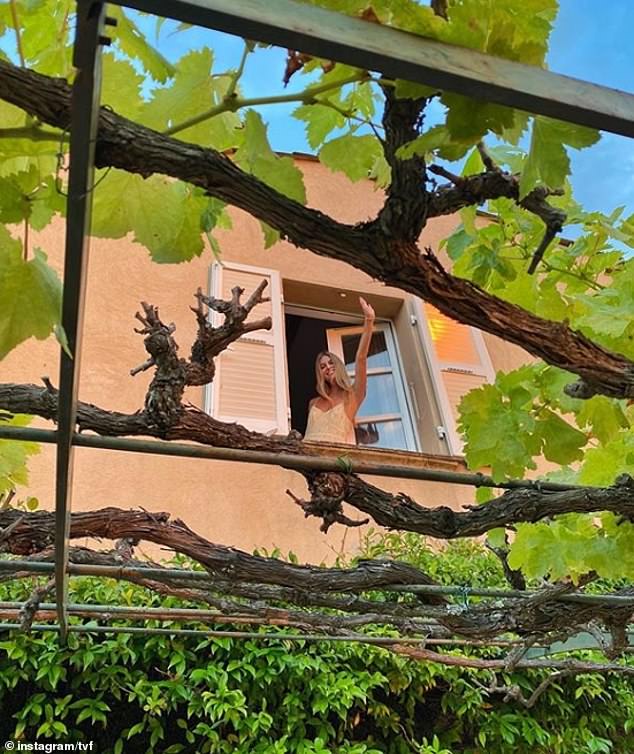 The 21-year-old, who has been keeping a low profile in Malibu during lockdown, recently shared a host of pictures from her luxurious holiday. She told FEMAIL she’s been enjoying a slower pace of life during lockdown, and has become ‘obsessed’ with meditation and daily yoga 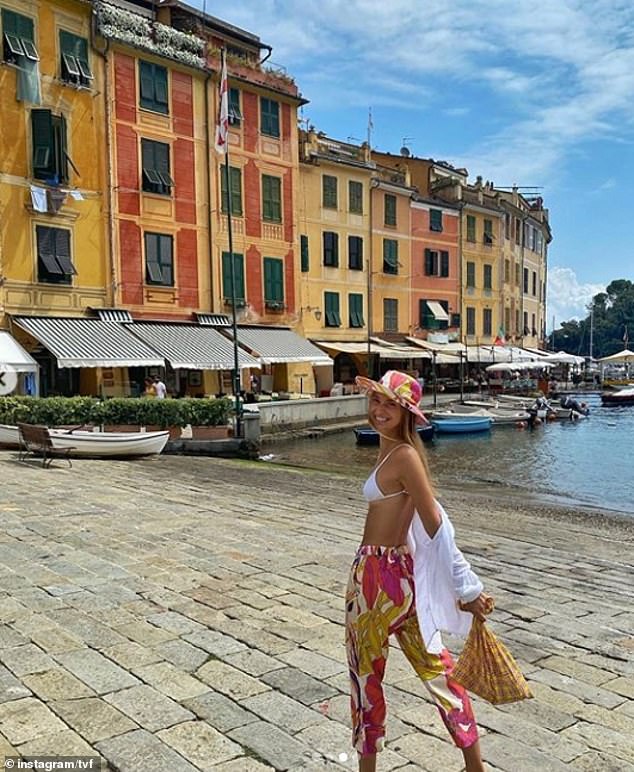 Talita acknowledged it’s been a ‘really challenging time’ for DVF, but hopes the brand will come out of the pandemic stronger. Pictured on holiday in Europe

Like many fashion brands, the pandemic has hit DVF hard; in June it was reported that Diane von Furstenberg laid off more than three quarters of her staff and is shuttering all but one of her stores as she moves to an almost exclusively online retail model.

Most of the company’s layoffs, which reduced a staff of 400 by 75 per cent, happened over Zoom in May, followed by layoffs of most of executive team the following month.

Talita acknowledged it’s been a ‘really challenging time’; she said: ‘We’ve been having to take a break to figure out what are the best steps for the future for DVF, and that means TVF as well.

‘We need to scale back and focus back on the core of the brand, the core dresses, and that’s really where the value of the brand is, what our customers want, going back to that is really important.’

But she hopes the brand will come out stronger, adding: ‘With a smaller team I think everyone can be on the same page a lot better.’