Non-food items left in cars have been found to be the perfect breeding spot for dangerous germs after just a few days – with sunglasses hosting more bacteria than a toilet seat.

Research conducted by the microbiology team at London Metropolitan University, on behalf of car leasing company Leasing Options, found that despite the wet and cold July, temperatures inside cars reached a scorching 91F (33 degrees) – hotter than the average summer in Greece.

The company found germs began to breed on 16 everyday items within days, including fungi on sunglasses, toxic mould on carrier bags and life-threatening bacteria on coins.

Surprisingly, testing revealed non-food items that are often left in the car for days produced more bacteria than food and drink packaging. 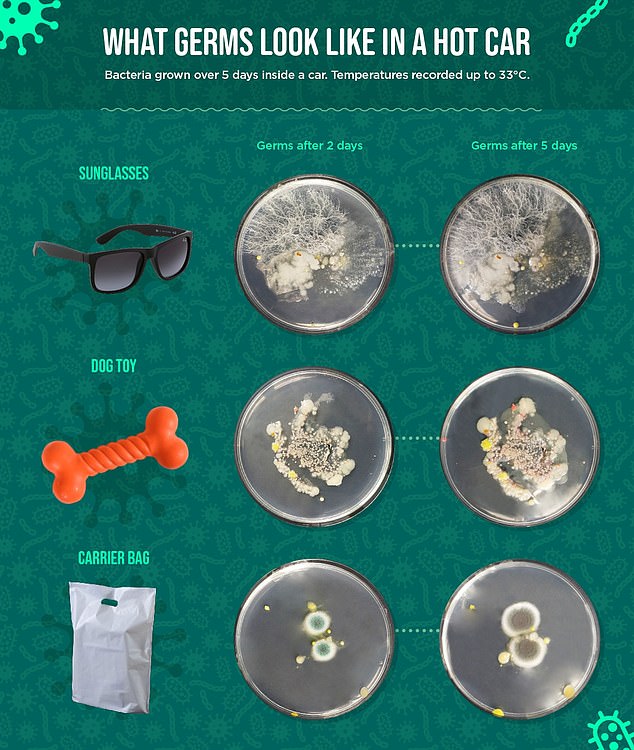 Results showed, when left in the car for a few days in warm conditions, sunglasses became contaminated with a fungi which can cause infection.

The glasses were found to be highly contaminated with the Staphylococcus epidermidis bacteria – which can cause infections.

It is is a particular concern for people with catheters or other surgical implants because it is known to form biofilms that grow on these devices. 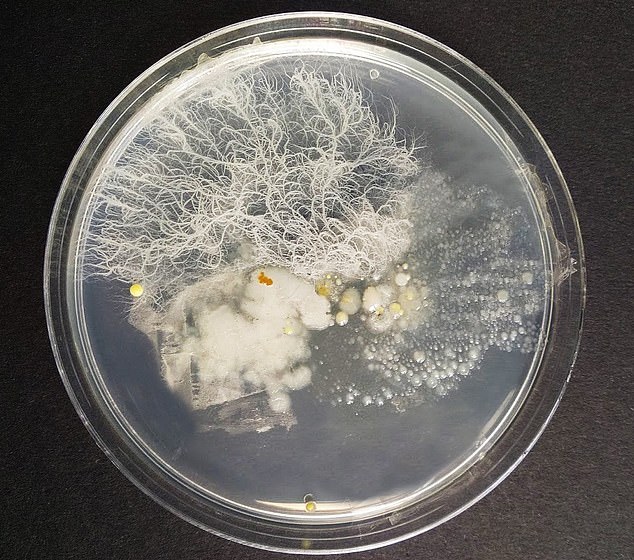 When left in a car for two days, the pair of sunglasses tested already began to gathered a lot of bacteria and was highly infected with Staphylococcus epidermidis 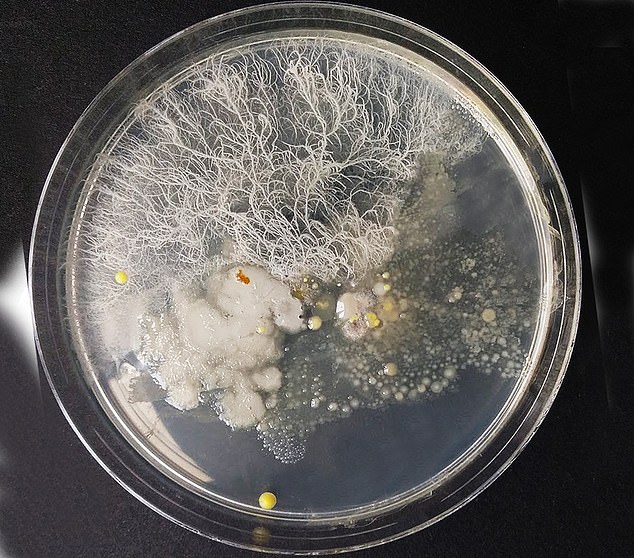 After five days the bacteria, which can cause infections and is particularly dangerous for those with a catheter, had expanded by a startling amount

While it is always handy to keep some extra dog toys in the back of the car for use on long walks, it may not be so advisable after all.

When swabs were put under the microscope it showed the presence of red germs, which could be Serratia marcescens.

In some cases the bacteria can cause disease if it enters the human body and is resistant to antibiotics. 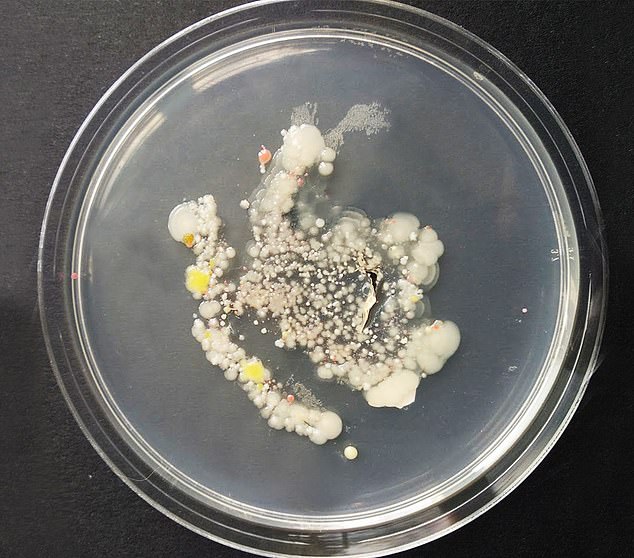 Within two days of sitting in a warm car the analysed dog toy had begun to produce a large amount of germs. The warm and wet conditions made for the perfect bacteria breeding ground 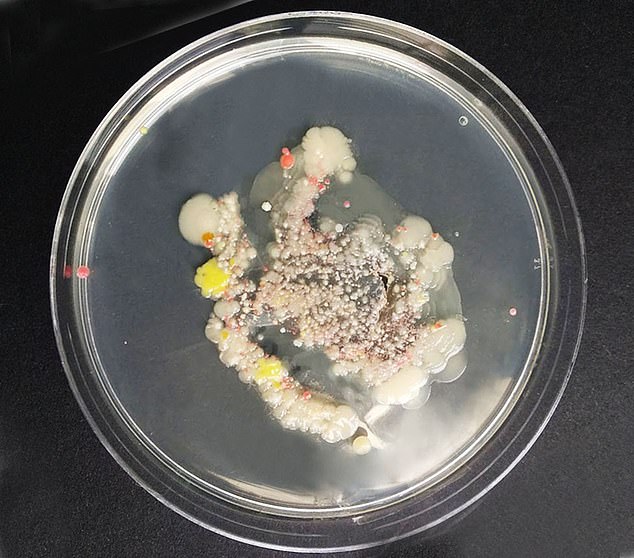 After the 5p charge for carriers bags was introduced, a lot of people have opted for keeping plastic bags in their cars to avoid being caught out.

But leaving carrier bags in there for several days could actually be causing a toxic green mould to form on the surface.

The swab test revealed the bags had grown mould which can be extremely dangerous for people with respiratory health conditions.

Ingestion of the mould can be particularly damaging for people with asthma or allergies. 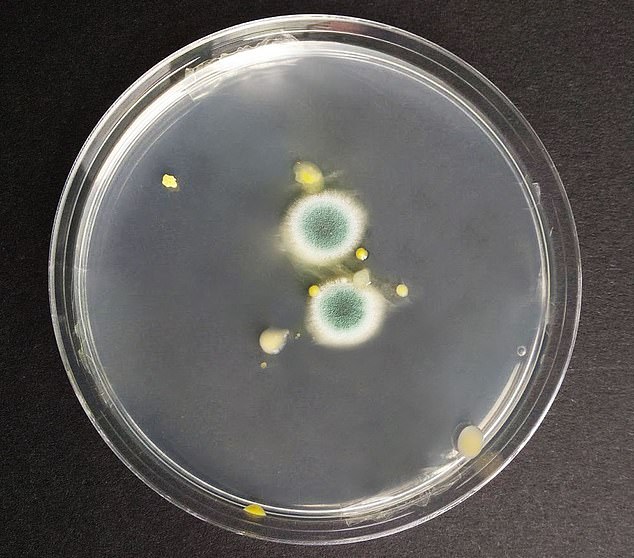 Two days after sitting in the car on a mild day, a toxic green mould had begun to gather on some plastic bags – an item commonly left in the boots of peoples cars for when they go shopping 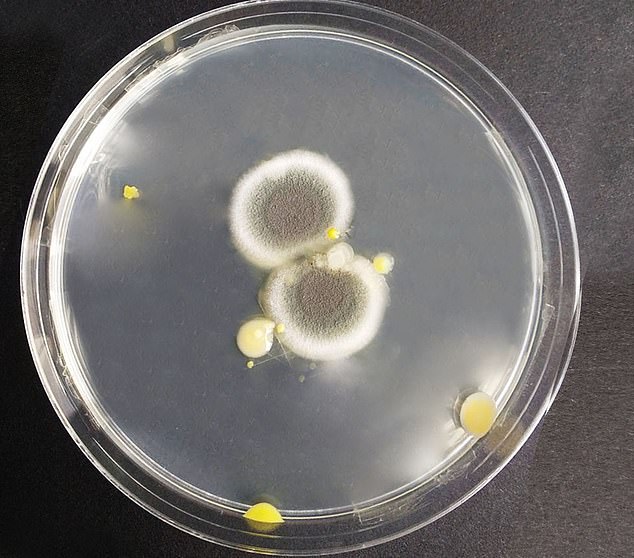 After five days the toxic mould, which can be dangerous for people with respiratory problems such as asthma and allergies, had grown considerably

After an grueling session in the gym, very often people will leave their sweating gym clothes and training in their car.

But the swab test results may put a stop to that habit after it found the dirty gym clothes and shoes began to develop large amounts bacteria.

After just couple of days, the petri dishes produced a variety of germs, showing just how dirty our workout gear can be. 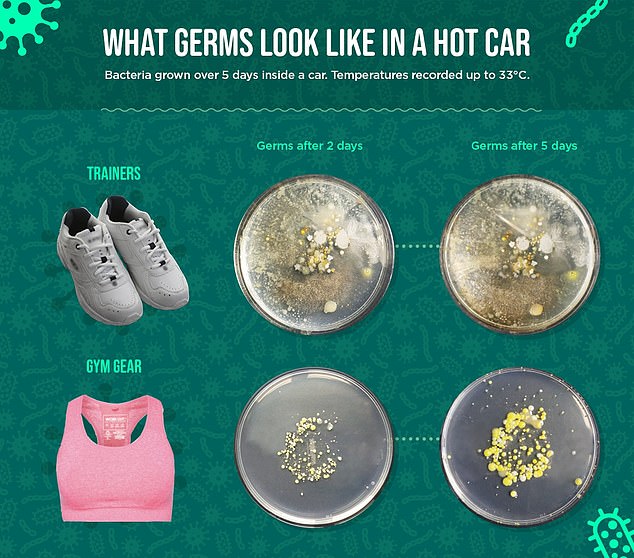 After an intense workout at the gym, the last thing you want to think about is the bacteria festering on your clothes and shoes, but these startling swab tests revealed exactly why it is important to take them out of your car 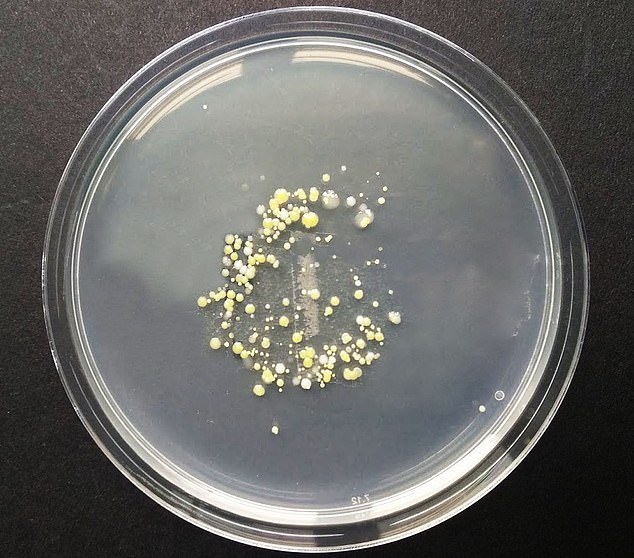 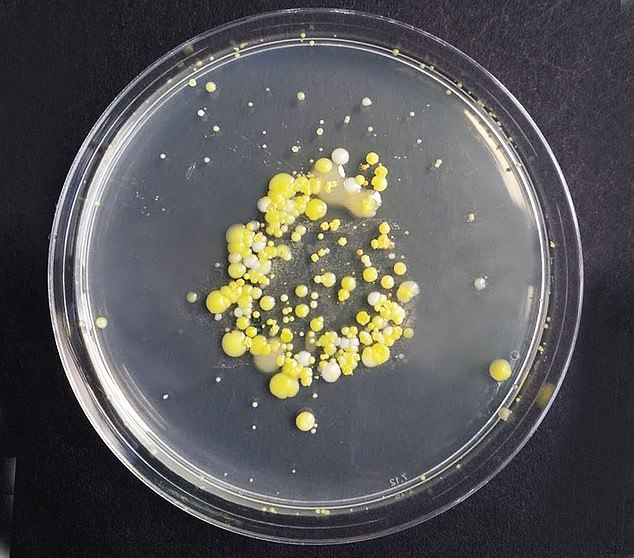 Three days later the bacteria and grown but luckily for keen gym goers, researchers suggest the germs found on clothes are largely safe

Luckily, sweat bacteria is normally harmless – apart from the smell – to humans but it certainly looks unpleasant.

However, trainers are little more risky, especially for people who like to go running or do outdoor gym classes.

Swabs of the trainers found dangerous bacteria such as E.coli and faecal bacteria, so keen runners are advised to watch out for dog poo while out getting their daily dose of exercise. 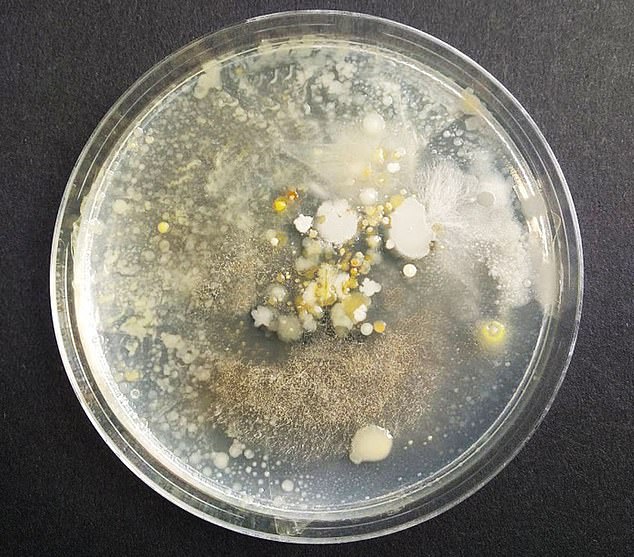 Unlike the clothes, trainers were found to have an enormous amount bacteria on them within a couple of days of sitting in a warm car 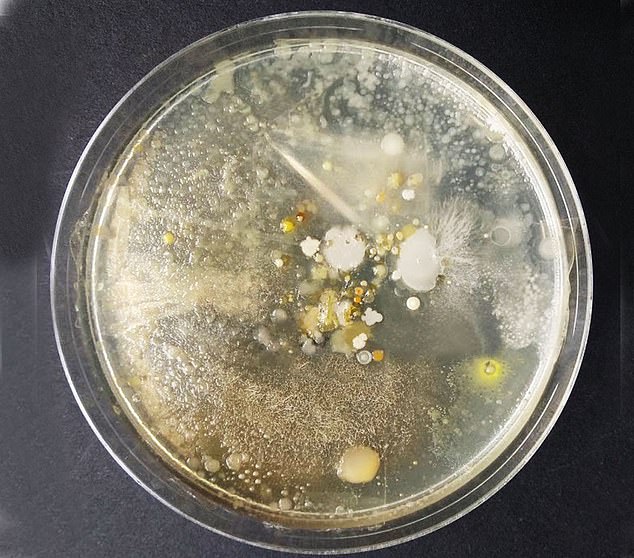 Swabs of the trainers found dangerous bacteria such as E.coli and faecal bacteria – potentially from running through dog poo while out and about getting a daily dose of exercise

Research by the microbiology team at London Metropolitan University found that our money harbours life-threatening bacteria that is linked with superbugs.

Within five days a large mass of bacteria had begun to form on the petri dish after swans from change were taken.

The university researchers discovered coins were a ‘breeding ground for harmful bacteria’ with ‘many microorganisms thriving on the metal’. 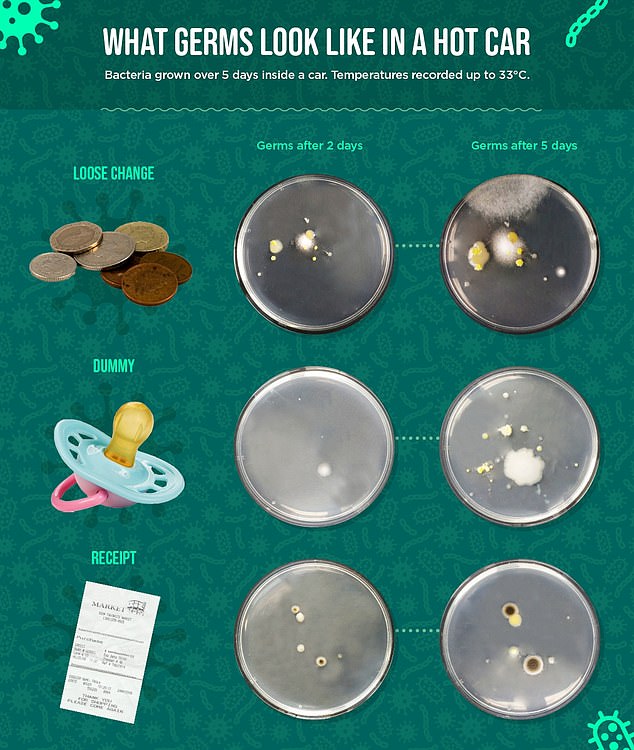 Random bits that often get left behind in cars, such as loose change, dummies and old receipts, were also found to harbour a number of nasty germs 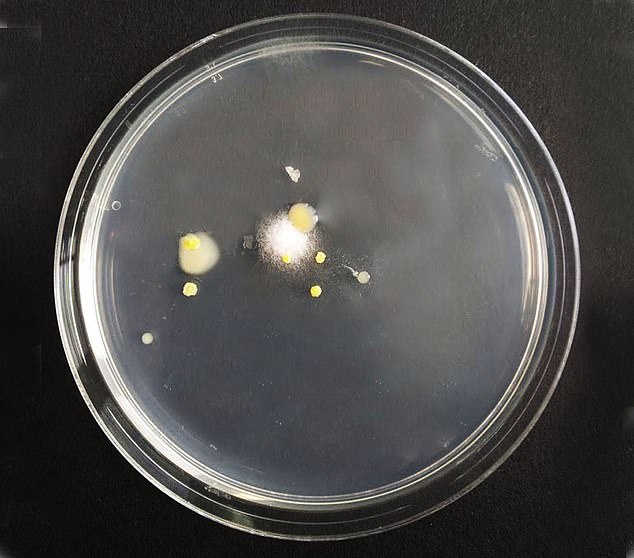 After two days, old coins left in the car were found to play host to a number of germs linked with superbugs, leading researchers to say coins are a ‘breeding ground for harmful bacteria’ 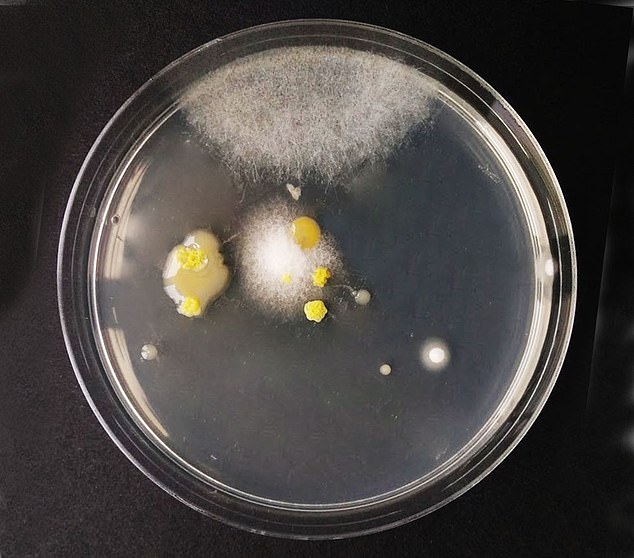 Often used to pacify distressed babies, the dummy has often been hailed as a life-saver by struggling parents, but their thoughts may be about to change.

The child’s dummy swab indicated signs of a yeast bacteria, which is common for babies who can get oral thrush.

While it is normally harmless and can be treated with medicine, scientists advise parents again giving a dummy to a child if it has been on the floor.

In addition, they suggest any discarded dummies which are found in the car should be thrown away and never given to the child. 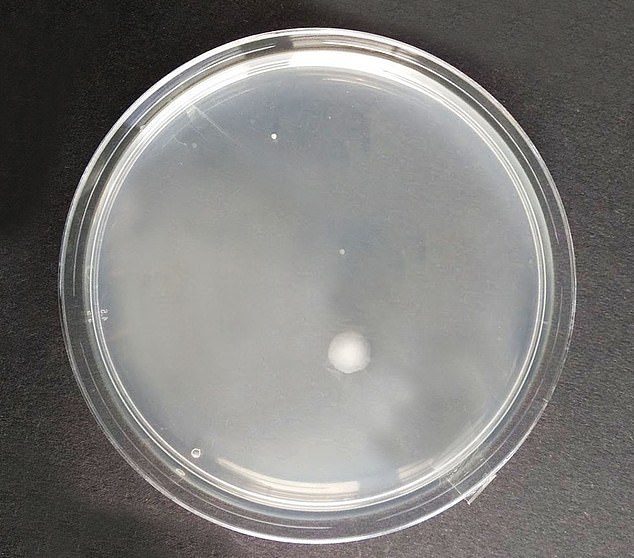 The child’s dummy swab indicated signs of a yeast bacteria, which is common for babies who can get oral thrush, within two days of sitting in the car 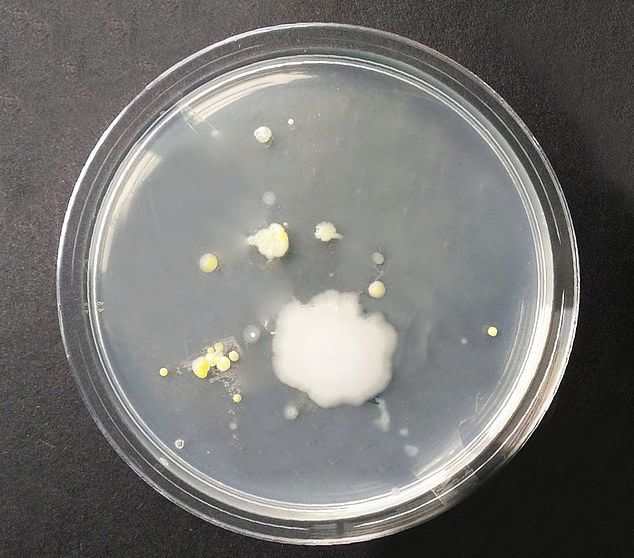 While the yeast bacteria, which grew after just a few more days, is normally harmless and can be treated with medicine, scientists advise parents again giving a dummy to a child if it has been on the floor

Perhaps one of the more unexpected bacteria culprits on the list is the humble receipt which often get chucked in a pocket of the car after a big shop.

The swab test appeared to show that mould grows on our leftover shopping receipts within a matter of a few days.

The mould found can produce toxic substances that irritate allergies and asthma, so make sure to bin your receipts when you no longer need them. 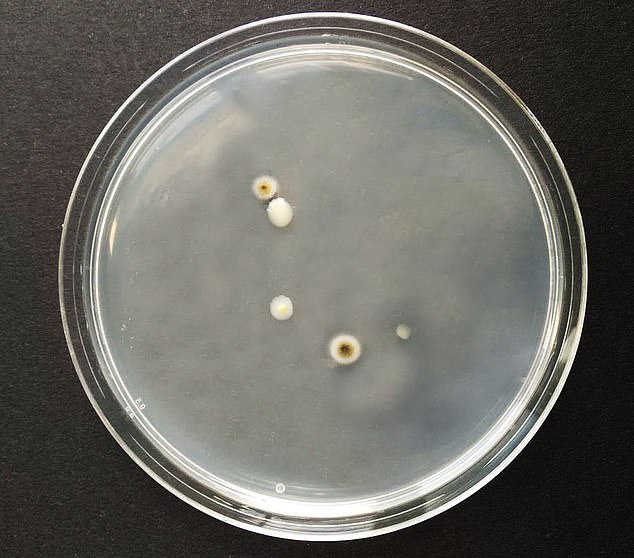 The swab test appeared to show that mould grows on our leftover shopping receipts within a matter of a few days, with two distinctive patches of bacteria beginning to form on the petri-dish 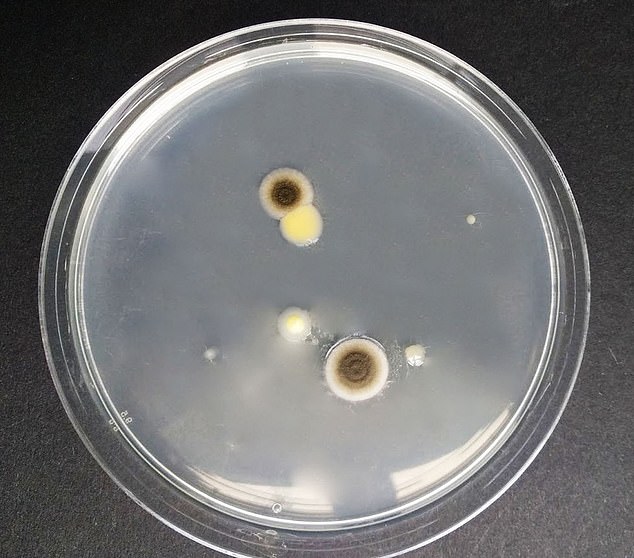 The small patches soon began to expand, with larger areas after five days. The bits of mould can be particularly dangerous for people with respiratory problems

As lockdown restrictions ease, many of us are flocking back to the drive-thru for a quick fix to our rumbling stomachs.

But the bacteria growth from common takeaway items, including a burger wrapper, ice cream spoon and water bottle, might make you think twice about leaving your rubbish in the car. 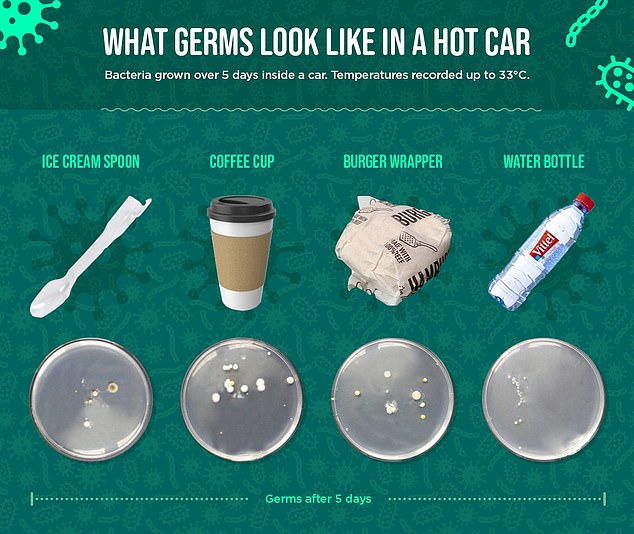 Withing five days of sitting in the warm car, every item had begun to grow some kind of bacteria or mould which could be dangerous if ingested 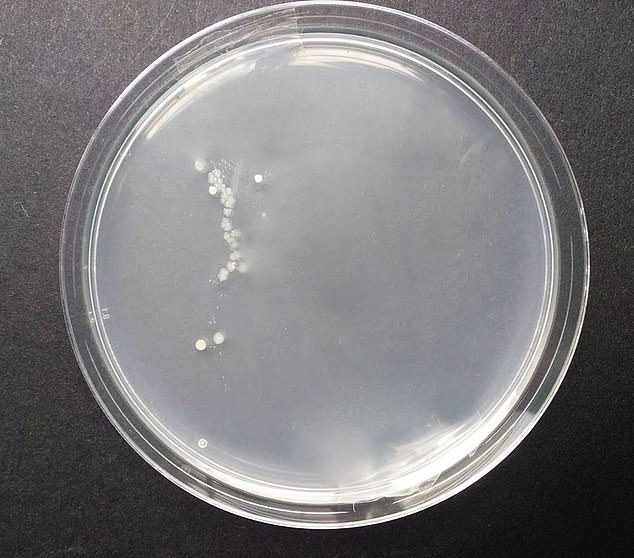 While the petri-dish for the water bottle after five days may not look too concerning, the researchers strongly advised people to not leave plastic water bottles behind in cars as they release toxic chemicals in heat 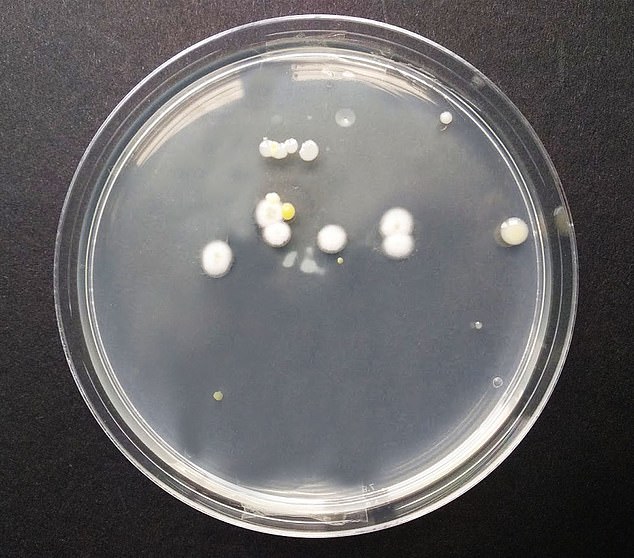 Your favourite burger wrapper may be more dangerous than you think, with a significant amount of bacteria forming within just five days of sitting in a car

Surprisingly, the packaging did not produce as much bacteria growth as the other items swabbed, such as the sunglasses and coins.

However, quite a large variety of different bacteria types were identified and lots of mould was found.

While the bacteria on the water bottle might not seem too shocking, the researchers advise drivers to never leave a plastic bottle behind in a hot car because the plastic can release toxic chemicals in heat. 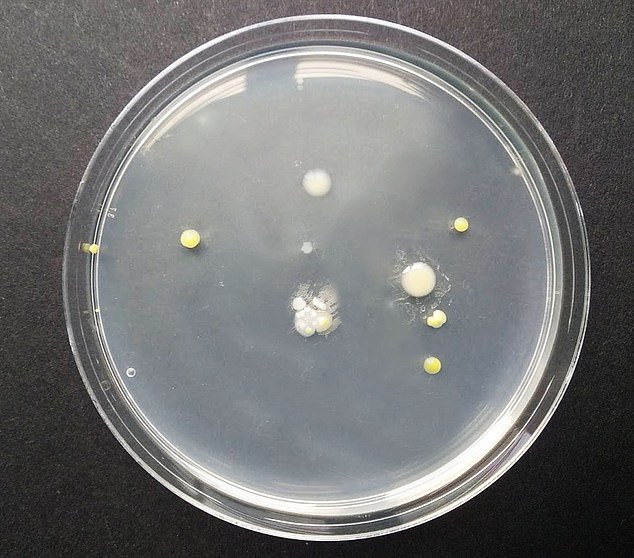 Often a go to for longer journeys when struggling to stay awake, coffee cups are often seen in cars and more often than not left behind too but perhaps people will now think twice after these shocking results show bacteria forms within days 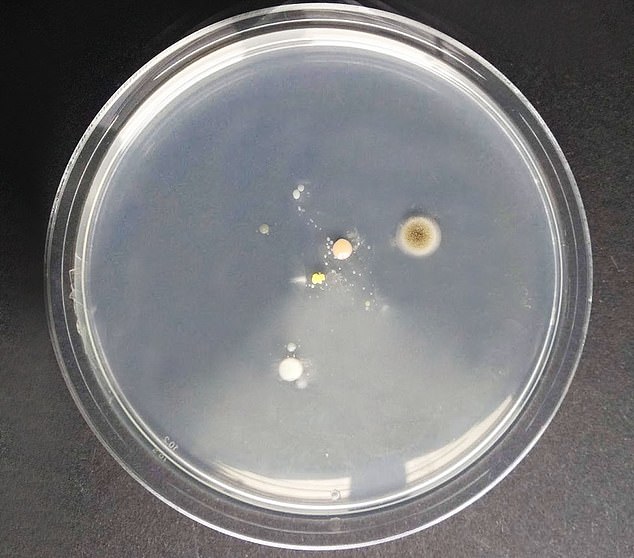 A much-loved treat for many families, the take away ice cream can often get forgotten and left in the car but even within five days dangerous germs and mould begin to accumalate

When panning a day trip out for the family or a long-distance drive to a campsite, people often pick up a variety of snacks to keep them all going.

But people may be shocked to see just how many germs begin to build up on their favourite items within just a few days.

If you have a sweet tooth, beware… they are the worst culprit, with a range of different bacteria colonies growing.

Although, the packet of crisps and protein bar weren’t that far behind! 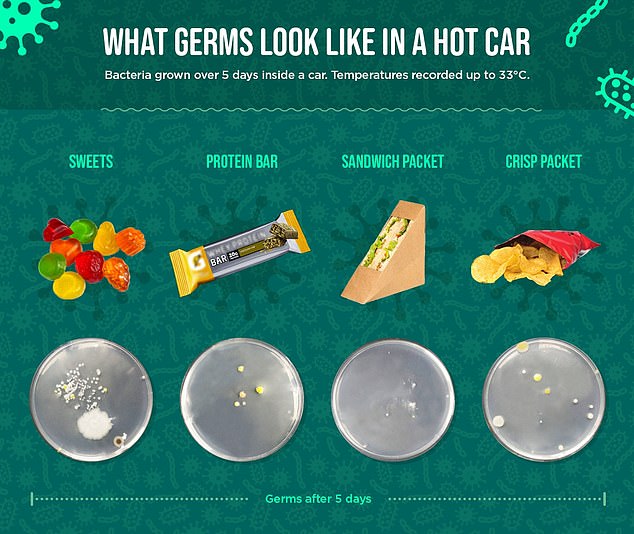 Your favourite car snacks for your long journeys may not last quite as long as you think they do, with a packet of sweet gathering a significant amount of bacteria within five days 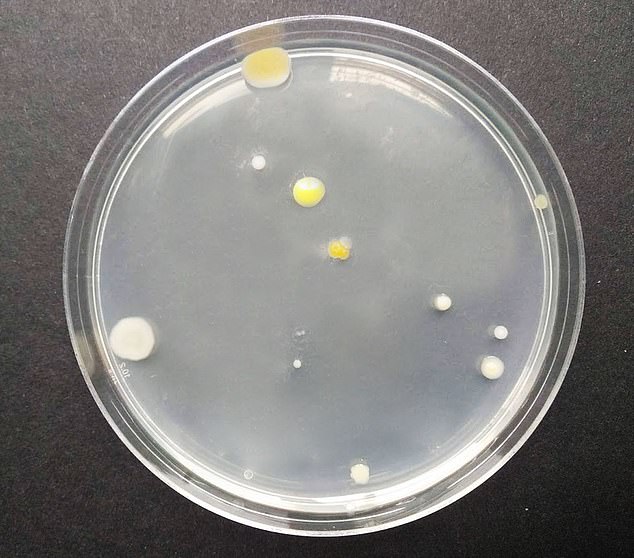 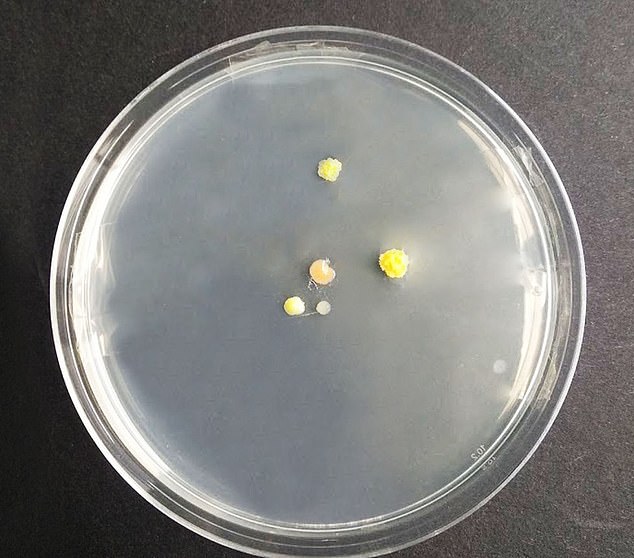 For the keen gym goers, similar to your clothes, your protein bars are not safe either – the packets were found to grow dangerous bacterias and moulds within five days of sitting in a warm car 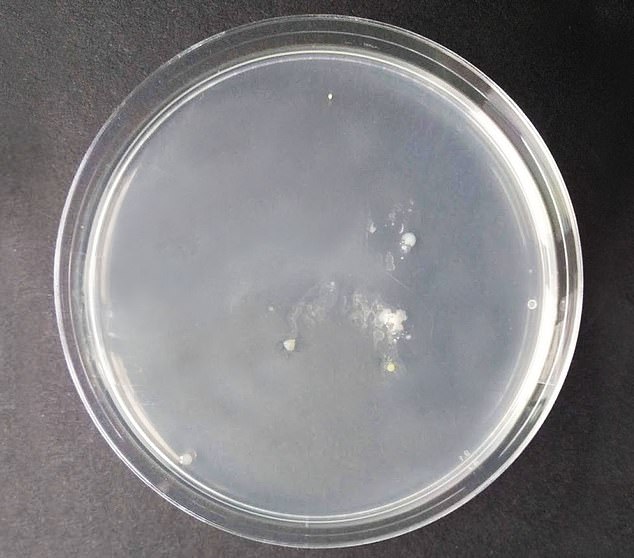 Surprisingly, that quick-fix sandwich you picked up to tide you over until dinner time will start gathering bacteria a lot slower than other popular car snacks, but it is still dangerous to leave for days 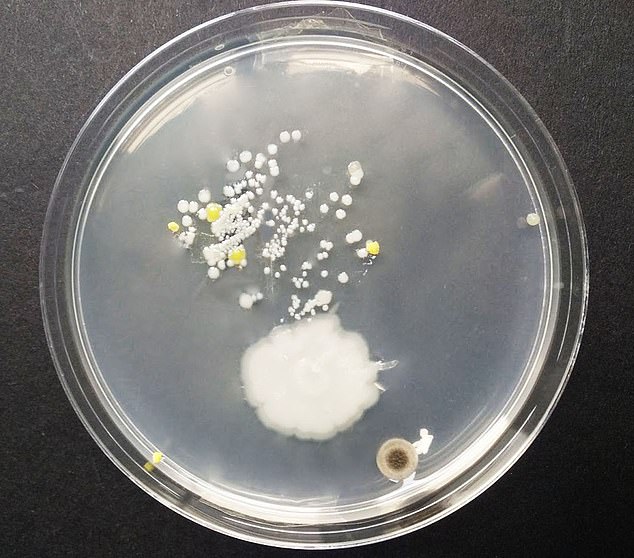