There was a theory the pandemic would eventually make the world a kinder place, turning us all into more tolerant, patient and – dare we say it? – sweeter individuals.

Lord Sugar hasn’t had the memo, or if he has he’s scrunched it up and fired it.

He’s first in the boardroom (sorry, virtual meeting room) today for our Zoom chat, ahead of schedule, and impatience is writ large on his face.

His first target? ‘Bl**din’ photographers!’ He’s just completed a quick (but not quick enough) photo session with our photographer Neale, who is there in person at his offices. 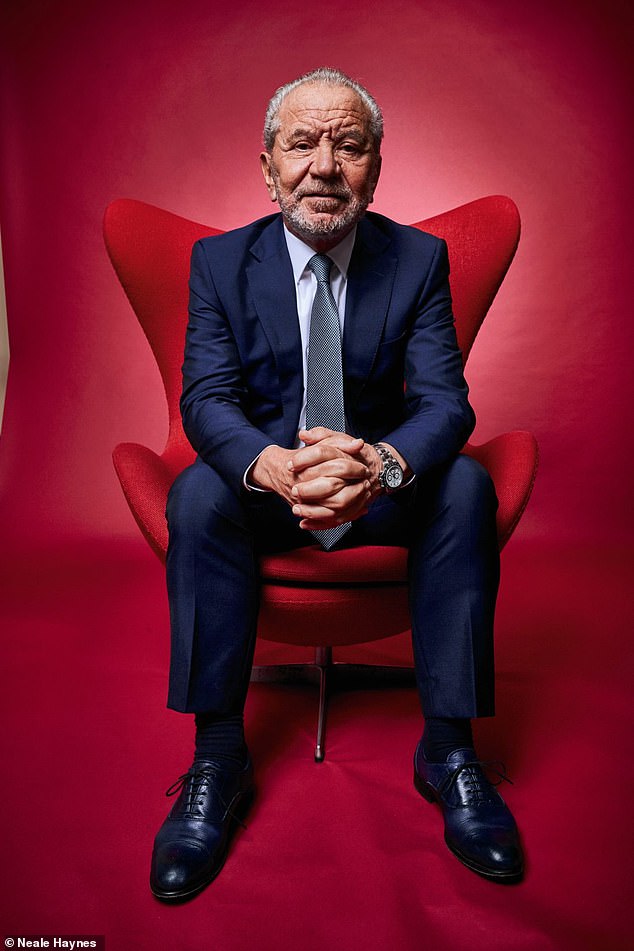 ‘I go in and ten minutes later I’m out. If they’re still clicking after ten minutes they’ll be clicking at a blank wall. Drives me bl**din’ nuts.’

Good job we didn’t send a hairdresser and make-up artist then. ‘I was going to dye my hair mauve for you,’ he says, deadpan. ‘But I decided not to.’

Thank goodness, we’ve had enough trauma this year. Lord Sugar spent the first part of lockdown at his Florida mansion, despairing at how President Trump – his former US Apprentice equivalent – was handling the crisis: ‘He is a moron.’

He then decamped to the Med on his yacht (which is called Lady A, after his wife Ann) for a while.

He never actually stopped working, even though he’s 73. Now he’s back at his desk, suited up.

‘My wife said this morning it’s the first time she’s seen me in a suit for six months,’ he says.

Contrary to popular belief he doesn’t always wear a suit in the office (‘when I’m with my people we’re in jeans and comfortable shoes’), but he suits up for The Apprentice, business meetings and encounters with irritating media folk.

He’s a stickler for ‘appropriate dress’. 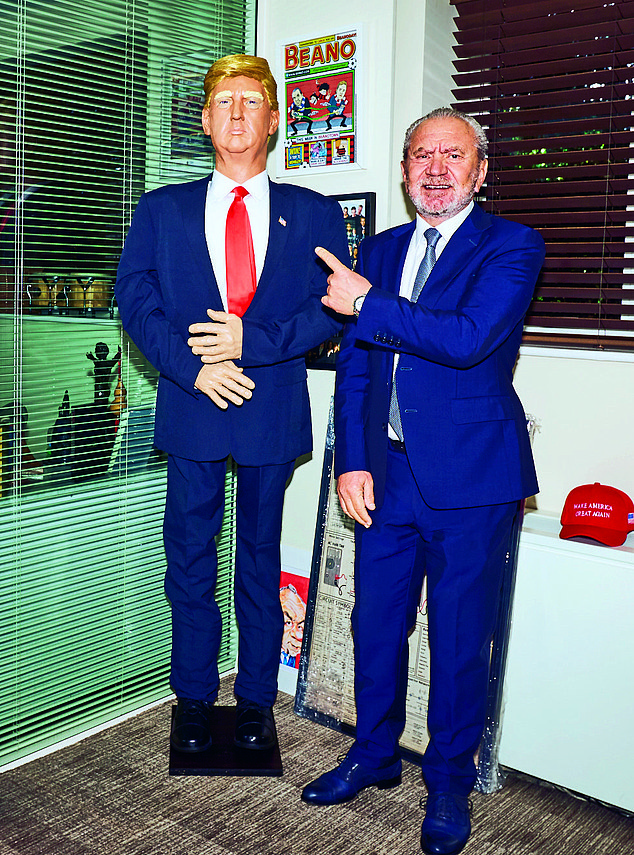 Lord Sugar spent the first part of lockdown at his Florida mansion, despairing at how President Trump – his former US Apprentice equivalent – was handling the crisis: ‘He is a moron,’ he said. Pictured: Lord Sugar with a dummy of Donald Trump in his office

He worried when he heard that, in lockdown, his seven grandchildren were getting their education via Zoom, but he was cheered when one granddaughter was ordered by a teacher to get out of her pyjamas and put her uniform on.

‘She said, “Are you kidding?”, but they were serious. Good. My children were proud of how diligently the grandchildren did their lessons. They didn’t skive.’

Skiving is a bit of a theme today. He might be at his desk but he’s cross that so many people aren’t.

‘I’M NEVER NOT ABOUT THE MONEY’

The cancellation of this year’s Apprentice means no investment from Lord Sugar’s pocket, which sounds like a £250,000 saving, but it’s a missed opportunity to make serious money. A business survey estimated that the nine companies he’s invested in to date (with a 50 per cent stake) are worth a combined £8.3 million. Small change for a man who owns a yacht (the Sunday Times Rich List puts his wealth at £1.2 billion), but still a considerable profit.

So how have they been faring in the crisis? ‘Obviously Dr Leah Totton [who set up a string of cosmetic clinics after winning in 2013] had to shut down, but she’s up and running again,’ he says. ‘A lot of the companies that do food and cosmetics have been doing very well because people have been shopping online. Mark Wright [2014’s winner, who runs a digital marketing business] is doing well – people want to put ads online – as is Tom Pellereau [the 2011 winner, famous for his nail files].’

He chats, almost gently, about which of his protégés have had children, but let’s be honest, his biggest concern is the profits. ‘The Apprentice companies, as I call them, employ about 300 people now,’ he says. ‘So lives have been changed. But I’m never not about the money. It’s like the sun coming up, or it getting dark at night.’

‘A lot of people have got quite used to working from home. There are two types of people.

‘There are the ones who want to get back to work, who can’t stand sitting at home. And the others who think, “Well, any excuse…”

‘If the news says the infection rate is still going up, they say, “I’ll stay at home.” They’re really enjoying it.’

As for the civil servants, don’t get him started.

‘It’s like High Noon in Whitehall. It’s like a bomb has hit it. They don’t want to come back, and they don’t have to – me and you are paying them, and they’re sitting on their a***s at home.

So what would he do? ‘The Government could say,”Well, we’ve done a review of how the Ministry of Defence, or the Treasury, is operating and instead of having 20,000 people there, weirdly it’s working with 15,000.”

‘You’re not saying you’re going to chuck 5,000 people out, but you’re sending a message that says, “Better get back quick.”

Of course, Lord Sugar wouldn’t be Lord Sugar if he wasn’t making us all feel faint with his forthright views, but has he failed to read the room?

When he went on Jeremy Vine’s radio show recently he seemed to put both feet in his mouth by railing about how the Government was being too cautious in its attempts to bring Britain out of lockdown.

‘So’s everybody else I know. No one else has caught anything.’

When I point out he was criticised for this, he bristles. ‘I didn’t notice. I got nothing but compliments on Twitter, people saying it makes a lot of sense.’

To be fair I think he does appreciate the human cost.

But his experience tells him the financial cost could ruin more lives in the long run.

‘We had to go into lockdown,’ he argues. ‘Thousands were dying. But we’ve had enough education now. We know to wash our hands, don’t join in any whacking great meetings, wear a mask. 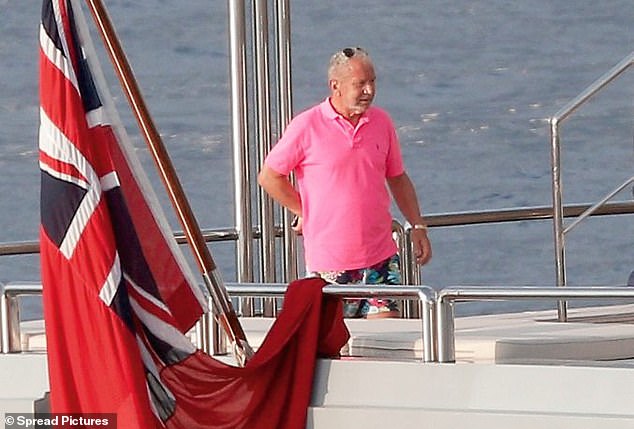 The businessman then decamped to the Med on his yacht (which is called Lady A, after his wife Ann) for a while. Pictured: Sir Alan on his yacht in 2016

‘Be sensible. I’ve got a cosmetics factory in Croydon and 300 people are back there.

‘We’re taking all the precautions. People are having their temperatures checked daily. It’s all doable. It’s not rocket science.’

He says 99 per cent of his staff wanted to return (‘It’s not as if I was saying, “Oi, get back”) and insists you can’t run a business with half the staff at home.

‘The young people are being trained up by watching what’s going on, asking questions.

‘They have no chance of learning from home. All these big banks that are saying, “Don’t come in for the rest of this year”, what about next year?

‘Unless this thing goes away or we have a vaccine, we’re in trouble.’

But he doesn’t criticise the BBC for pulling the plug on this year’s The Apprentice – instead he’s been filming segments for a six-part highlights series.

He accepts there was no way it could happen.

‘We put them on planes to exotic places, have them cook in kitchens, go up to people in the street, give presentations to big audiences. It wasn’t possible.’

But watching the best bits from the past 15 series has made him chuckle, and you will too if you’ve forgotten how clueless-yet-captivating some of the contestants were.

‘Remember Alex Epstein (series 6), who told us I think outside the box. If I was an apple pie, the apples inside me would be oranges’? 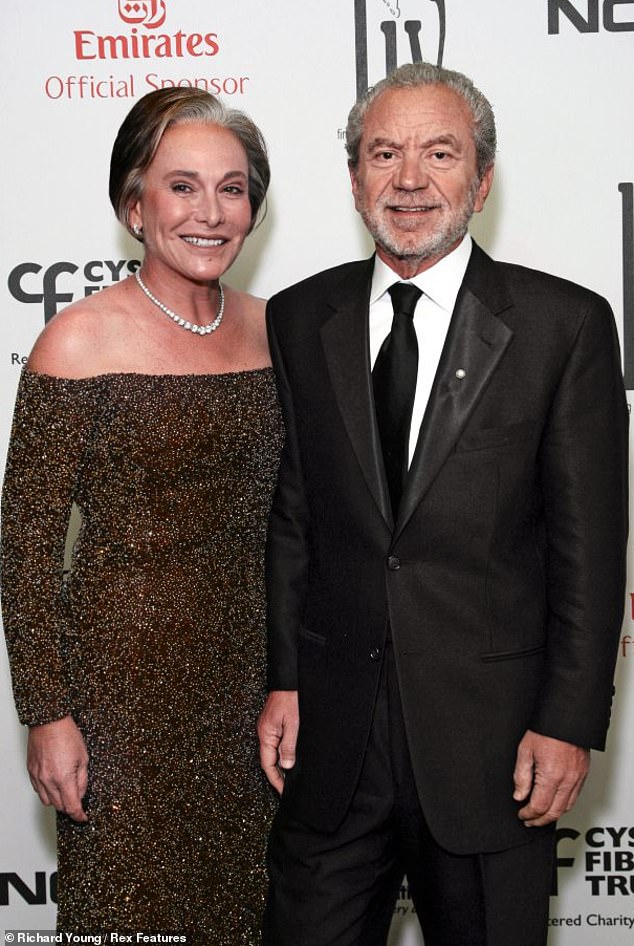 Stuart Baggs (series 6) valiantly assured Lord Sugar he wasn’t a one-trick, or even ten-trick, pony: ‘I’ve got a whole field of ponies waiting to literally run towards this job.’

Then there was Pantsman – Philip Taylor (series 5) tried to unleash a superhero who sold cereal by dancing in his pants (Lord Sugar was not amused).

When I ask if there’s ever been a year when he didn’t want to invest in the contestants, he almost smiles and points out that he doesn’t choose them.

‘There have been times where the group is not as good as a previous group. But I have to take the best, I’ve stuck to my promise.’

I wonder if he has worried about contestants seeing the show as a springboard to celebrity rather than business success.

He says many have tried. ‘They see themselves on TV and get the attention, then get withdrawal symptoms.

‘Second-rate game shows come along and make idiots of them and they go to the opening of an envelope.

‘But apart from Saira Khan [runner-up in Series 1, now a TV presenter], no one’s succeeded in the media.’

Two words: Katie Hopkins. Would he like to apologise for unleashing the outspoken columnist on us? ‘As I said, I don’t pick the contestants,’ he says.

He’s hugely entertaining company, but combative. He has to win, even when there’s no competition.

He mentions the knee replacement surgery he had last year, but says it hasn’t stopped him charging through life.

He’s challenging the wrong person. I don’t even have a bike.

His is a pedal bike, not a fancy electric bike like the one Simon Cowell fell off.

‘Poor old Simon. I heard he was doing wheelies. Well, I don’t do anything like that.

‘When I’m flying my plane (to go with the yacht) people ask if I do aerobatics. No, I don’t mess about with things like that.’

He’d like to lead The Apprentice for another four series, marking 20 years at the helm. And the day job?

‘My wife says I’ll never stop, but there might be physical constraints or I might go a bit loopy.’

Not to be rude, but does Lady Sugar want him to retire?

After six months of having him around 24/7, she may need some respite.

Is she glad he’s back at work?

‘She is,’ he says, with as much cheer as Lord Sugar can manage.

‘She only has to put up with me in the mornings and evenings. Me being back gives her a break.’