Sarah Palin and her estranged husband Todd put on a united front on Monday night as they came together to celebrate the birth of their daughter Willow’s newborn twin girls.

The former Alaska governor, 55, shared a sweet photo of the couple each cradling one of their grandchildren, who she revealed have been named Banks and Blaise.

Willow’s joyful new arrivals were born just two months after it was revealed that Todd, 55, had filed for divorce from his wife of 31 years – who admitted that she felt as though she had been ‘shot’ when she learned that he was leaving her. 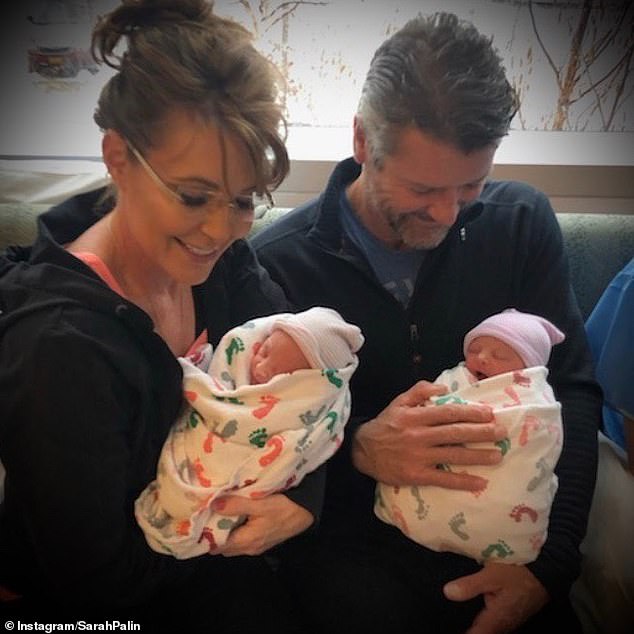 Reunited: Sarah Palin and her estranged husband Todd reunited on Monday to celebrate the birth of their daughter Willow’s newborn twin girls, Banks and Blaise 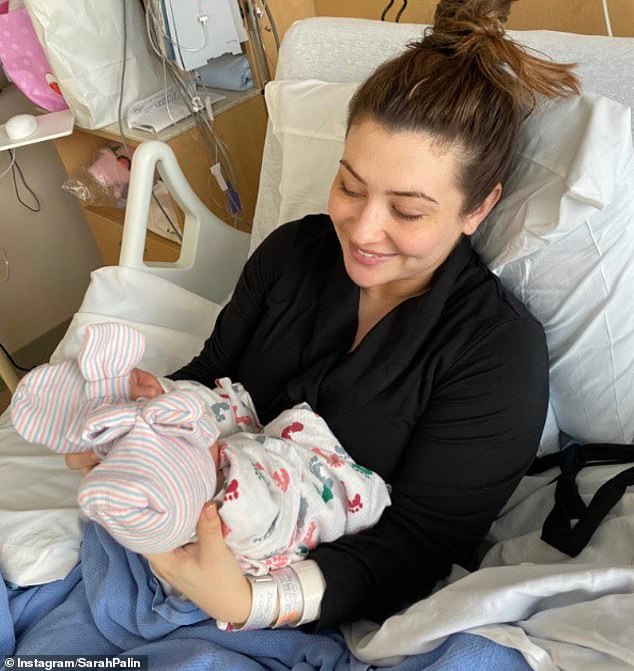 Mama! Willow, 25, and her husband Rickey Bailey, announced that they were expecting twin girls in May, and the newborn appear to have arrived a few weeks early 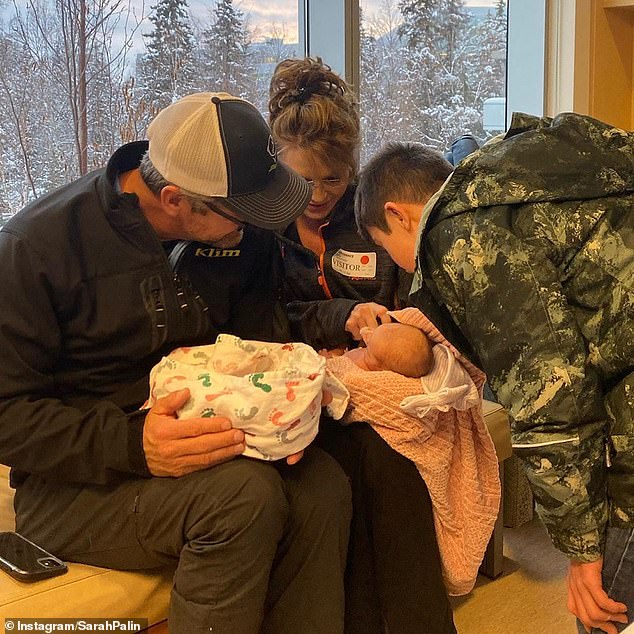 Family first: Sarah and Todd, both 55, were seen proudly cradling their newborn grandchildren at the hospital, while their 11-year-old son Trig looked on in wonder 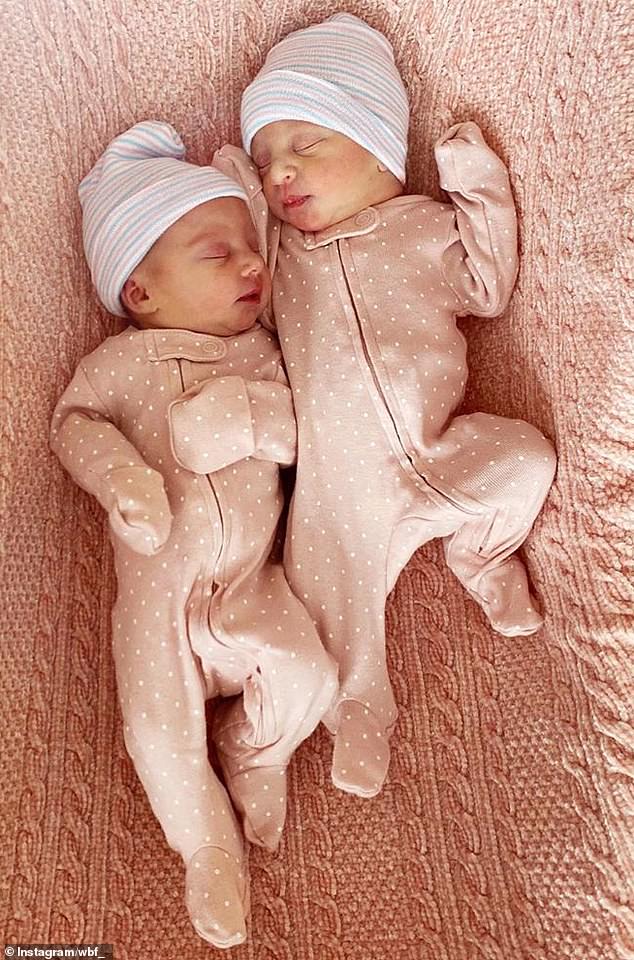 Happy welcome: Proud new mom Willow shared an image of her baby girls on Instagram, writing, ‘Banks and Blaise… we are so in love with you girls’

However, on Monday night, the couple put their differences aside in order to celebrate the birth of their fifth and sixth grandchildren.

And they are not the only members of the extended Palin family who were on-hand to help Willow and her husband celebrate the arrival of their first children together.

As well as the photo of herself and Todd, Sarah also posted a series of candid snaps on her Instagram showing various members of the family with the adorable newborns, as well as their mother herself, who was pictured proudly cradling both of her daughters while sitting up in her hospital bed.

The new mother was also joined by her grandparents, Sarah’s mom and dad, Sarah and Charles Heath, as well as her siblings, Piper, 18, and Trig, 11. Her older sister Bristol, who is based in Texas, away from her family in Alaska, was not pictured at the hospital, nor has she yet posted about her sister’s newborns on Instagram.

But her absence did not appear to dampen the Palins’ spirits as they celebrated the birth of their newest family members, with Sarah writing on Instagram: ‘Banks&Blaise!! BlessingX2. Congratulations Willow&Ricky = and then there were four.’ 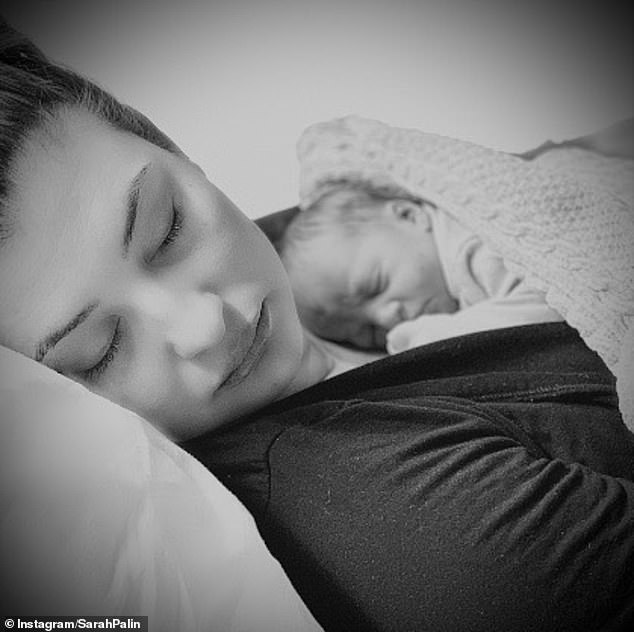 Early arrival: Willow was just 36-weeks along when her twins were born, however it is common for twins to arrive early 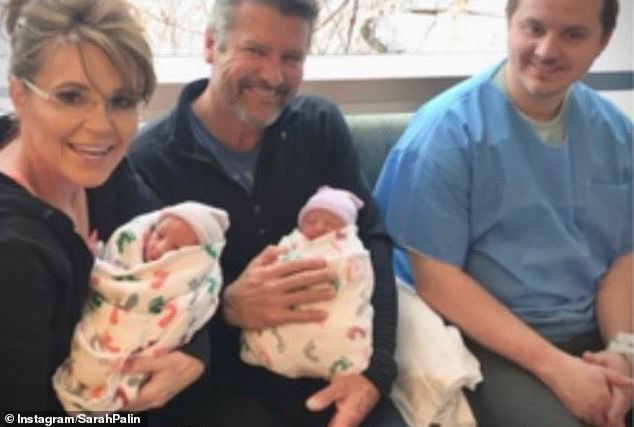 New father: In one image shared by the former Alaska governor she was seen posing with her estranged husband and her son-in-law – and proud papa – Rickey Bailey (right) 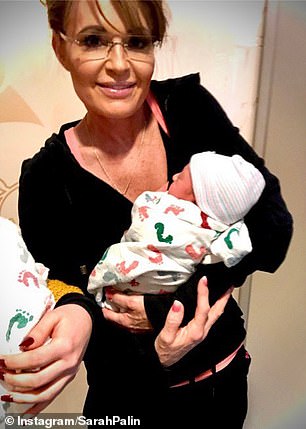 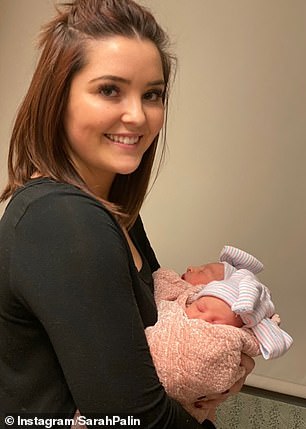 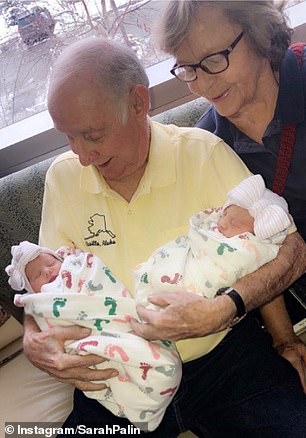 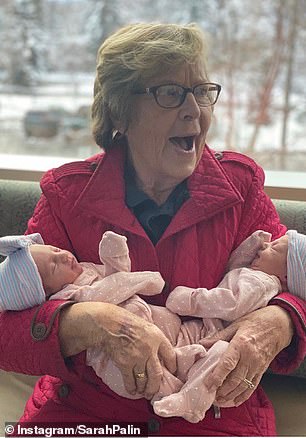 Great grandparents! Sarah’s mother and father, Sarah and Charles Heath, were also on-hand to join in the celebrations surrounding the birth of their great granddaughters

One particularly sweet photo shared by the grandmother showed her sitting alongside Todd, with each grandparent holding a baby in their lap, while their son Trig, who has Down syndrome, leaned over to stare down at the adorable newborns. 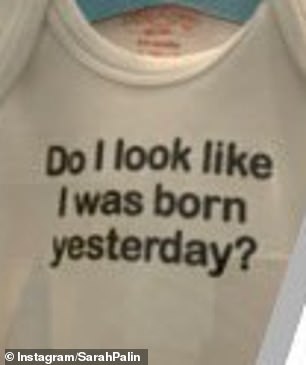 Hint? Sarah posted this image of a baby onesie as part of the Instagram album, suggesting that her granddaughters were born on Sunday

New mother Willow is seen sleeping alongside one of her babies in one photo, while her husband Rickey is pictured sitting happily alongside his proud parents-in-law, who are holding his daughters in another sweet snap.

Sarah also posted a photo of a baby onesie that reads, ‘Do I look like I was born yesterday?’ suggesting that the twins arrived on Sunday – a few weeks ahead of schedule, with Willow revealing on Saturday that she was at 36 weeks, while posting an update image of her baby bump.

‘So thankful to be able to carry our girls this far… 36 weeks and counting!’ she wrote at the time.

On Monday, she then followed that photo up with a photo of the twins themselves, capturing the tiny babies sleeping alongside one another while wearing matching pink onesies and pink-and-blue-and-white striped hats.

‘Banks and Blaise… we are so in love with you girls,’ the proud new mother wrote. 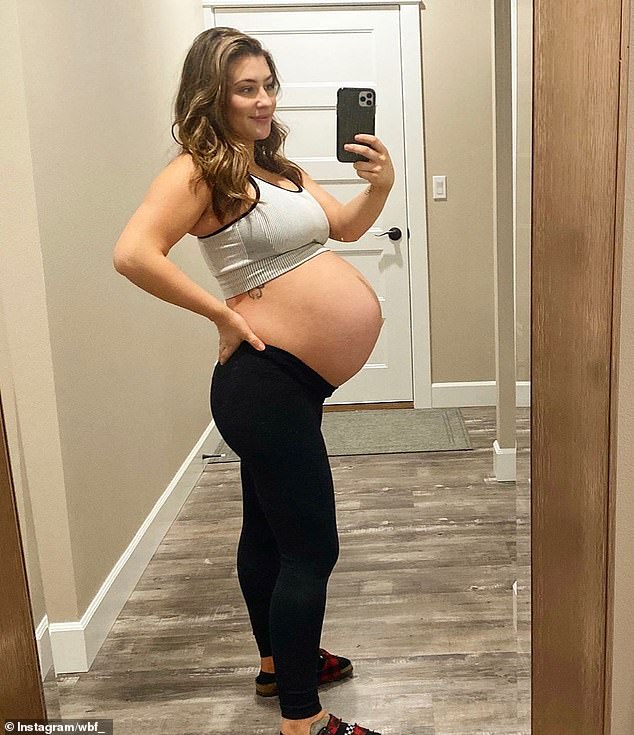 Countdown: Willow posted a bump update on Instagram on Saturday, revealing at the time that she was 36-weeks along at the time

Expecting: The new mother announced that she was expecting her first children with husband Rickey back in May

Her joyful announcement comes just days after her mother Sarah spoke out about her divorce, revealing in a candid interview with broadcaster James Dobson, founder of the Family Talk Christian ministry, that Todd told her he was planning to leave her in an email, with the former politician admitting that she ‘thought she got shot’ when she read the news.

However, Sarah added the couple is going through counseling and made clear that their marriage isn’t ‘over, over’, while confessing that their attorneys are ‘getting rich’ off them as they continue to try and work through their problems.

She later added that God doesn’t want families to split up, saying: ‘And to me, in a general sense, marriage is so extremely important as foundation of our nation.

‘It helps make America that much greater, is that security of family, and I’m not to the point of wanting mine to be split.’

Despite telling his wife about his plans to file for divorce in June, Todd did not actually make a move to dissolve his marriage until September, when he filed paperwork with the Anchorage Superior Court.

The filing cited an ‘incompatibility of temperament between the parties such that they find it impossible to live together as husband and wife’.

Sarah and Todd have been married since 1988 and share five children and now seven grandchildren together. 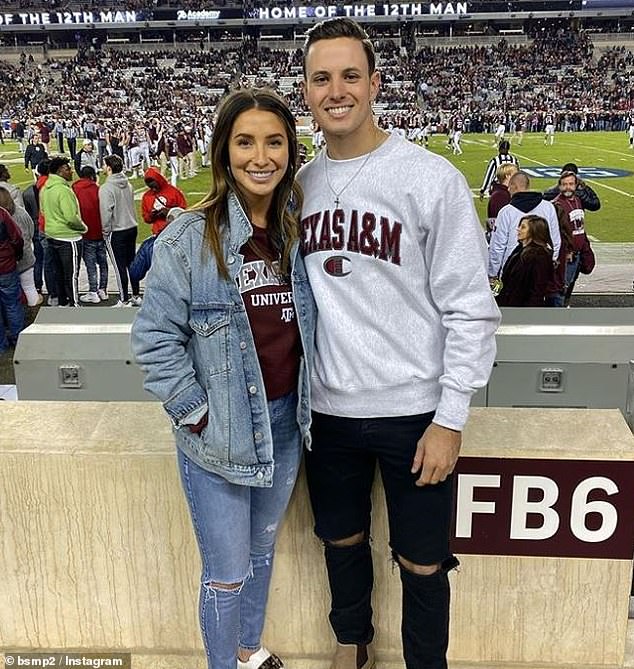 Another celebration: Willow’s sister Bristol, who lives in Texas, was not at the hospital, but she shared her own milestone over the weekend by revealing her new beau, Janson Moore 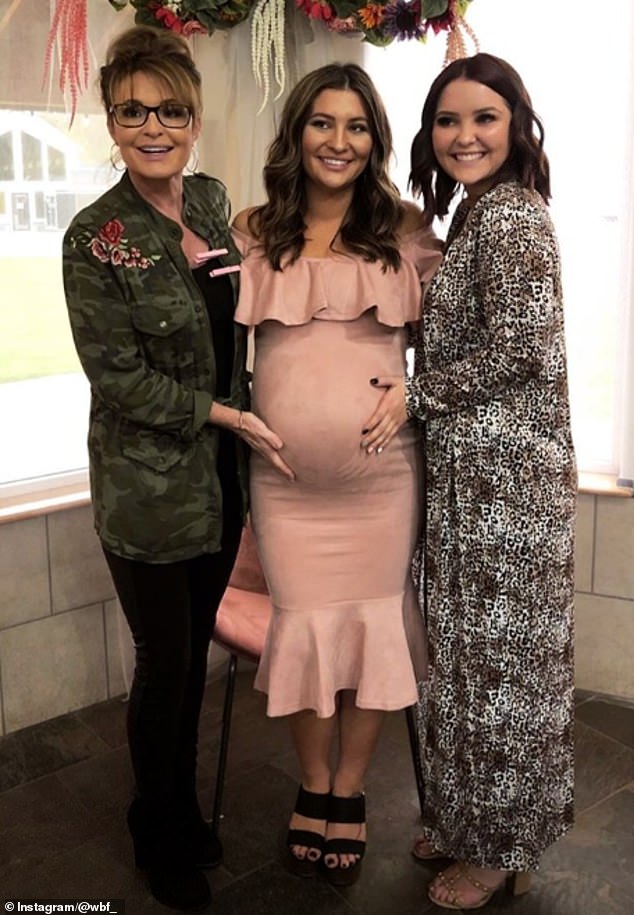 Absent: Bristol was also not present at her sister’s baby shower, which was attended by her mom and her younger sibling Piper

Daughter Bristol, who lives in Texas, has three children: son Tripp Easton, 10, whose father is her ex-fiance Levi Johnston, and daughters Atlee Bay and Sailor Grace, whose father is Dakota Meyer, her ex-husband.

Although Bristol was not present at the hospital with the rest of her family, she celebrated her own milestone over the weekend, introducing her new boyfriend to the world in a happy Instagram post.

In the snap, the mother-of-three, 29, is seen posing alongside Janson Moore, a 24-year-old medical sales representative, at a Texas A&M football game.

Bristol, who is wearing a Texas A&M sweatshirt to match her beau, captioned the post with a simple heart-eye emoji.

Janson, who is a former Texas A&M quarterback and, according to his Instagram bio, a ‘follower of the living Christ’, also posted the snap, referencing the bible verse James 1:17 in the caption.

The verse he referred to reads: ‘Every good gift and every perfect gift is from above, and cometh down from the Father of lights, with whom is no variableness, neither shadow of turning.’