Activist actress Rosario Dawson has spoken out about how she uses self-care and wellness to deal with the daily stresses of day-to-day life, while sharing how she is helping to teach her daughter about the importance of a healthy, balanced routine.

The 40-year-old spoke to DailyMail.com while celebrating her new role as a spokesmodel for natural beauty brand Burt’s Bees, opening up about her favorite methods of self-care, which include following a raw vegan diet.

‘If I could every day, I would get at least eight hours of sleep, and I would stay hydrated, and take a shower and have a bath with all of that stuff like essential oils… but I don’t get to do that,’ she said of her own wellness habits. ‘But if I can do a few of those things, I feel really really great. 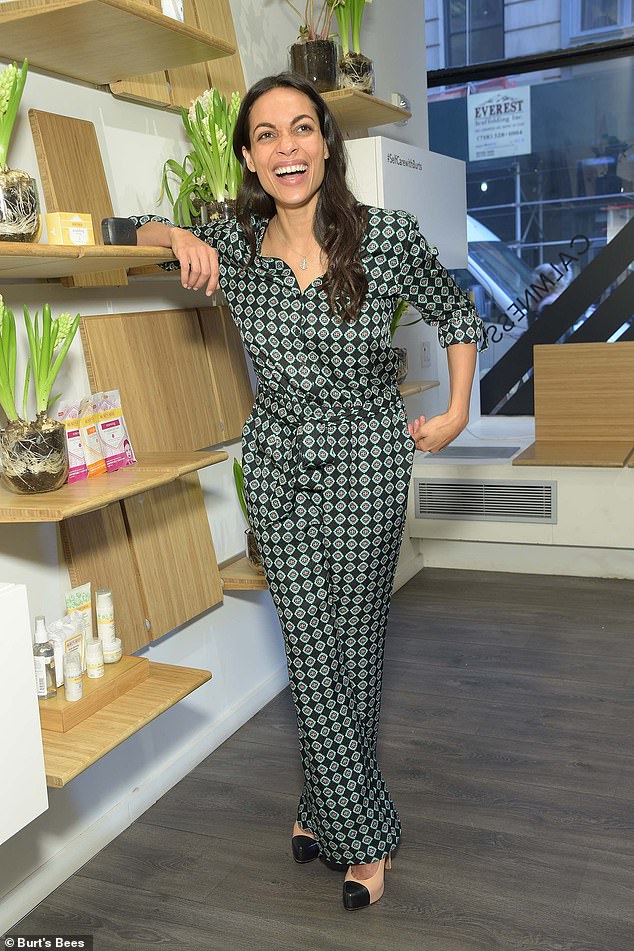 Lifestyle: Rosario Dawson has revealed the self-care routine that she follows on a daily basis, including maintaining a raw vegan diet 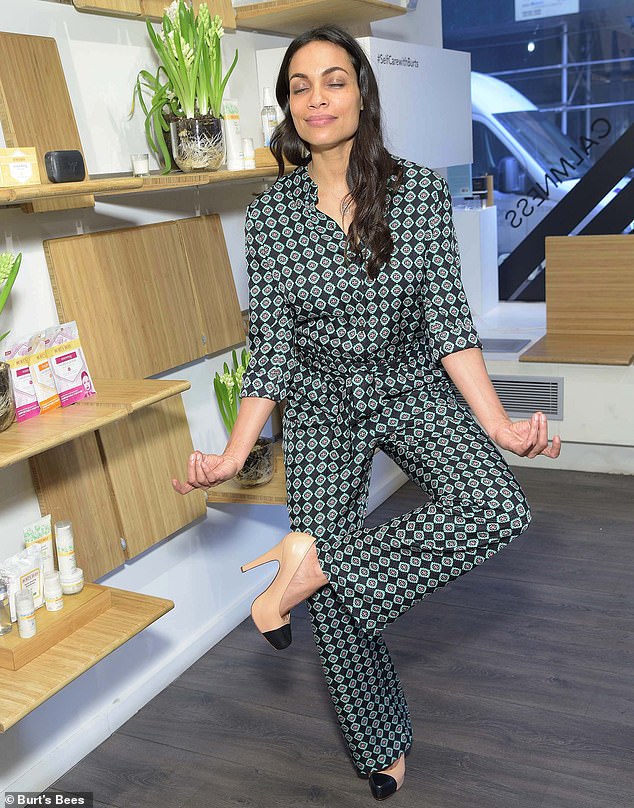 Healthy mind, healthy body: The 40-year-old, who just partnered with Burt’s Bees, says that she tries to focus a bit on wellness each and every day 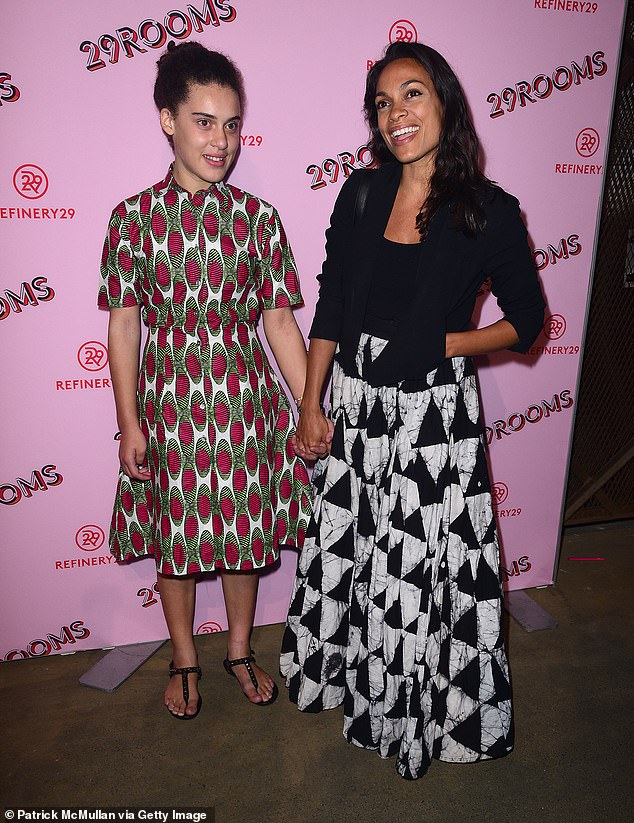 Teachings: Rosario, who adopted her daughter Lola in October 2014, said that she is trying to lead by example when it comes to following a self-care routine

‘I’m eating mostly raw and vegan right now so that’s giving me a really great base line because that’s so consistent, so that’s really helping.

‘So even if I’m inconsistent a little bit with some of the other stuff, I feel really OK. I feel good, my body doesn’t feel so stressed out.’

However, while she is well aware how important it is to take care of both her mind and her body, Rosario says that wasn’t always the case – and she admits that she has found herself ‘starved’ of self-care at certain points in her life, particularly when she was younger.

‘I think [self-care] is something I was definitely starved of,’ she explained, before adding that she was fortunate enough to have learned certain wellness practices from the people around her growing up that meant she had a lot of self-care habits implemented in her life without even realizing.

‘Luckily I had some practices and things built in because of things I recognized in certain family members without even truly getting what that was that they were doing to take that time for themselves,’ she said.

The actress knows that this isn’t always – and certainly hasn’t always – been the case for most people however, and she added that she is grateful for what she sees as a cultural shift towards embracing self-care and wellness, without seeing it as ‘strange or weird’.

‘As I get older [self-care] is just something that I am so appreciative of – and the fact that the cultural conversation is geared towards it in a way that kind of demystifies a lot of things about it and also takes away some of the shame or weirdness around it,’ she said.

‘Where I grew up, the ethos around [self-care] was often like, “Well if you’re complaining about that, you’re lucky you got…” It was always too bougie, the idea of getting massages regularly or whatever.’

That idea of self-care being an essential part of life – rather than a luxury – is something that Rosario is determined to teach to her daughter Lola, who she adopted in October 2014, when the now-teen was 12. 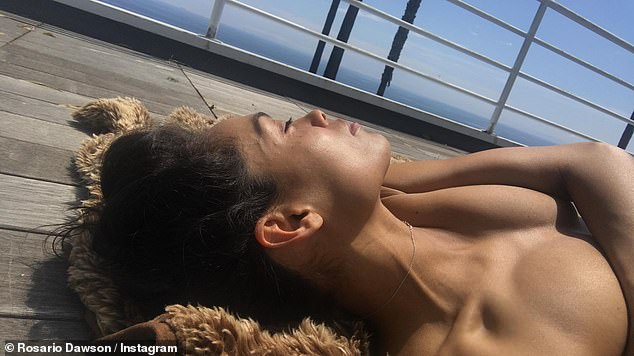 Older and wiser: The actress, who turned 40 just a few days ago, said that she has learned more about the importance of self-care as she has grown up 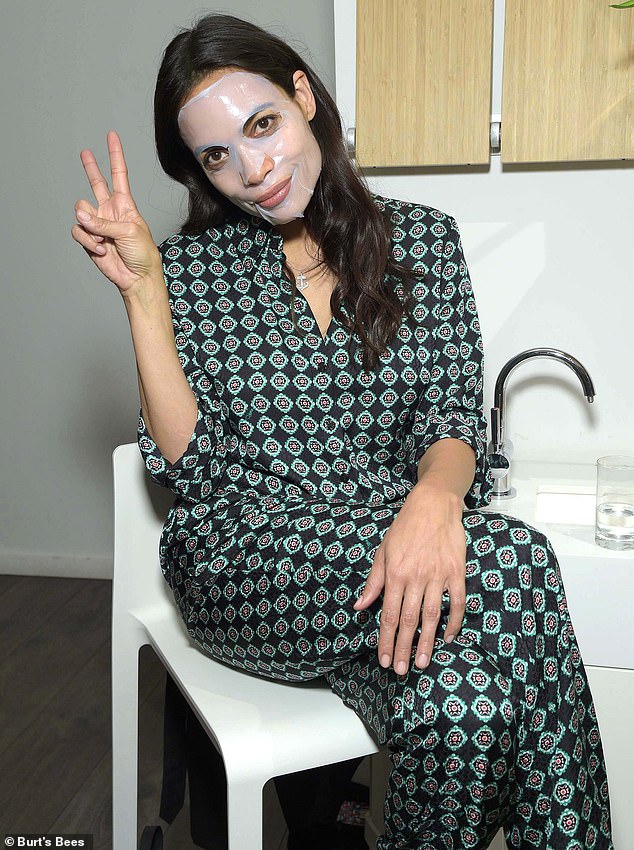 Thoughtful: Rosario said that she tries to eat healthily, as well as use natural products on her body, noting that she wants to be aware of what she is nourishing herself with

She explained that she is doing her best to lead by example when it comes to maintaining a truly healthy, balanced, lifestyle, noting: ‘Children don’t listen, they emulate.

‘So I can tell [Lola] all I want, but if I’m not doing it, she’s not going to follow it. So that’s the most important part.

‘And I think that is one of the things that pushed me so much around being even more fastidious about a wellness routine.’

For Rosario, part of that self-care discipline involves keeping an eye on the things that she is putting on and in her body, from her healthy vegan food, to her beauty products – which she tries to ensure remain as natural as possible.

Speaking about her partnership with Burt’s Bees, she said of the brand that it not only helps her to know that she is using natural ingredients, but it also nourishes her mind to think that she is supporting a company with such an environmentally-friendly ethos.

‘Burt’s Bees even have bees in the name so it immediately connects you to nature and what your relationship is with it,’ she said.

‘And it gives you a positive. Some people, when you say “bee”, they start looking around in apprehension. You say “Burt’s Bees” and they’re like, “Oh can I have some?”

‘It’s really critical that we have great companies who are doing great work [like Burt’s Bees] who are also supporting bees. So you know that when it comes to the ethos of the company, you are supporting something really great that is [in turn] supporting the values that you already have.

‘It’s also made with natural ingredients, stuff that is important like the cotton extract that’s good for anti inflammation, aloe that is good for inflammation. Not everyone is going to have an aloe plant but you can carry one of these [products] around and that’s great for you to continue to hydrate.’ 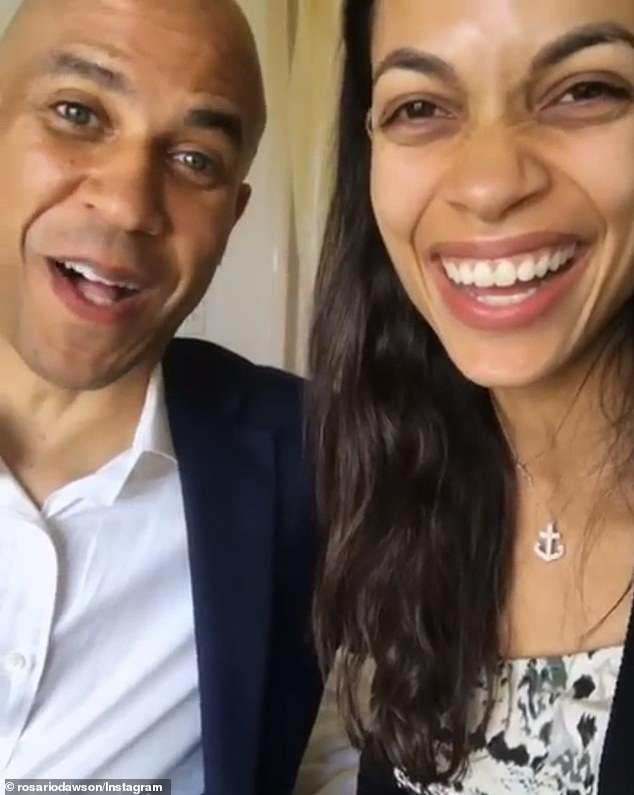 Smiling happy: The actress is currently dating Democratic 2020 hopeful Cory Booker, who spoke out recently about what a great first lady she would make 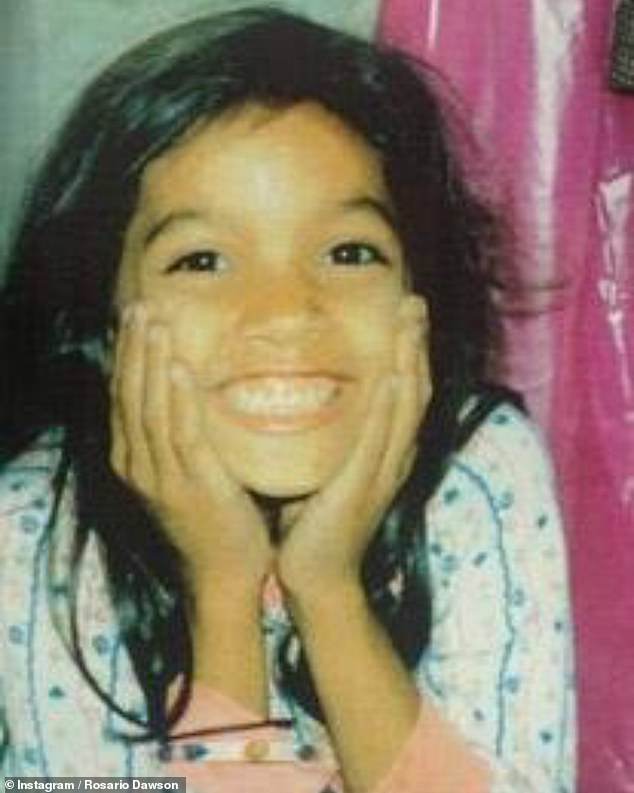 Early advice: While many do not get the chance to focus on self-care in their youth, Rosario says she was lucky enough to be surrounded by people who taught her healthy habits 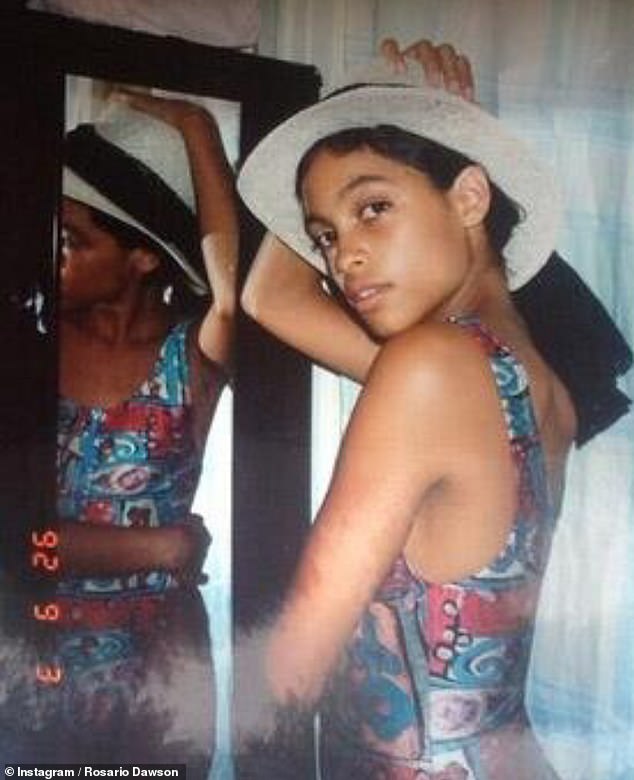 Stress: However, she says that while she was growing up in New York, people would take pride in how stressed and anxious they were, because it was seen as a sign of success

But it isn’t just the concept of cleansing her skin and body, or eating right, or drinking enough water that Rosario is trying to educate her daughter about however.

As well as a healthy body, she says that she also wants to focus on keeping a healthy and happy mind, noting that this just as essential to a good life.

‘I’m so used to powering through when I’m feeling discomfort or whatever, and kind of ignoring when the alarm bells go off,’ she admitted.

‘That’s not normal, that’s actually a sign that something is abnormal and I have to do something about it.’

Rosario used her daughter’s eczema as an example of how the body might manifest any deeper issues, explaining: ‘My daughter has eczema and when it flares up and she’s getting really itchy, it’s like [her] body is crying out for help.’

However, she cautioned that many people don’t pay attention to these ‘red flags’ in their own day-to-day lives, and respond with more stress and concern, rather than the kind of TLC that they really need.

When it comes to changing cultural views on self-care, Rosario says that she feels as though society has reached a ‘critical’ point in the need for a more open and honest conversation – one that does not allow for wellness stereotypes that might once have existed.

‘I think we’ve definitely hit a critical mass in our conversation around [self-care],’ she said. ‘It’s not just LA people who like to do yoga or drink juice or actors who care about exercise, or athletes… it’s no longer that subjective.

‘That trans activist needs to practice self-care and that single mom raising kids in a walk-up. All of us need to be able to have access to it.’

Rosario said that activists in particular need to take stock of their wellness routines, and ensure that they are allowing themselves enough time to rest and recharge in whatever ways work best for them, because it is the only way that they will be able to deal with the criticism that they so often receive.

‘[Self care] has become so critical [for activists],’ she said. ‘Especially in the work that we’re doing, when you’re taking in so much negativity. If you don’t actively release it as actively as you are bringing it into your system, it’s going to corrupt you.

The actress speaks from personal experience, having spent years working as a political activist; she also recently revealed she is in a relationship with Democratic 2020 hopeful Cory Booker, who spoke out to praise Rosario for her tireless work, admitting that he thinks she would be a great first lady.