A travel influencer who was proposed to by her boyfriend in front of the Eiffel Tower, following a seven-day scavenger hunt, has been mocked over the size her engagement ring.

The enormous oval-cut rock surrounded by jewels, on a band of more diamonds, was slammed by Facebook group ‘Ring Shaming’, for looking ‘fake’ and ‘tacky’.

The Los Angeles-based owners of make-up subscription site Liveglam, Dhar Mann and Laura G, had jetted into Paris on day three of the scavenger hunt and she had been keeping her nearly two million followers updated with the trip.

When she revealed on day seven that Dhar had popped the question, many of her followers flocked to congratulate them – but ring shamers were out in force. 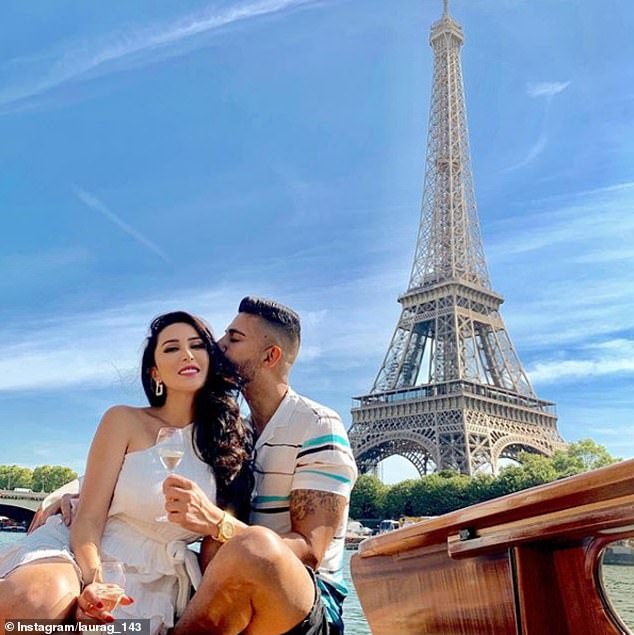 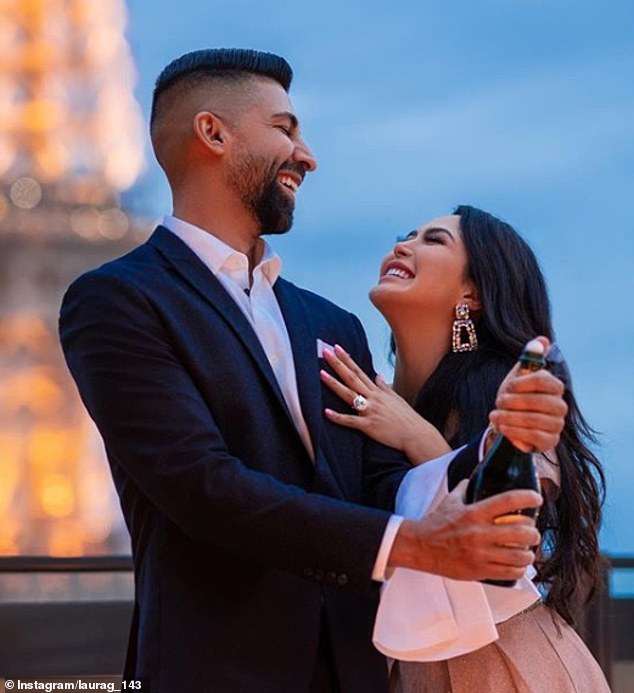 The couple, who celebrated their engagement right away with the Eiffel Tower shining in the background, seemed over the Moon 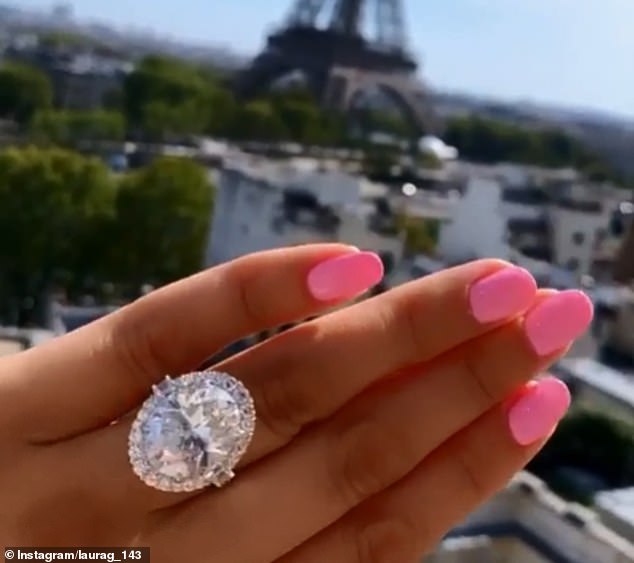 The original post wrote: ‘An influencer that I adore just got engaged after a week long scavenger hunt proposal that led them to Paris and then comes back with this atrocity.’

‘That’s honestly the ugliest thing I’ve ever seen and I’ve seen some real ugly ones on this page!!!’ responded one.

‘The stones and setting are wider than her actual finger. It’s so out of proportion,’ pointed out another.

One person said: ‘I think it’s super tacky.’ ‘It looks like something I would have received as a prize at an arcade when i was 5 & work for a week till the ring part snapped,’ mocked another one woman.

‘If it’s real it’s repugnant. If it’s fake it’s still repugnant but also economical. Basically this ring is so bad it would literally be better made of plastic,’ criticised another. 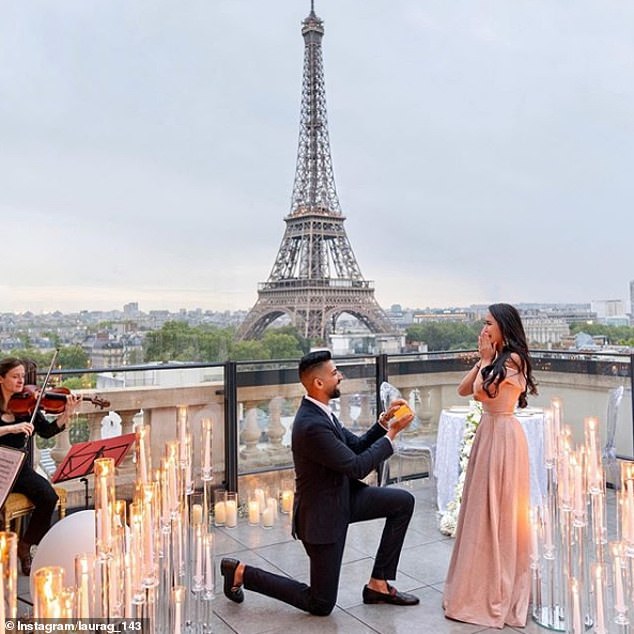 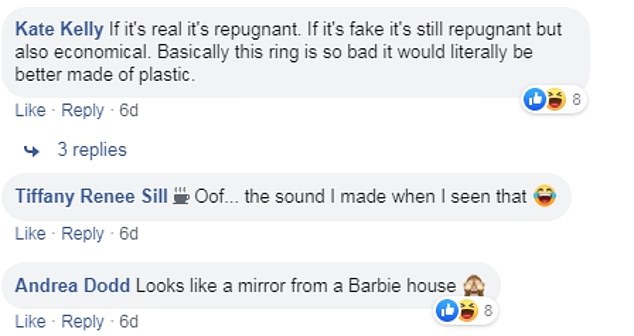 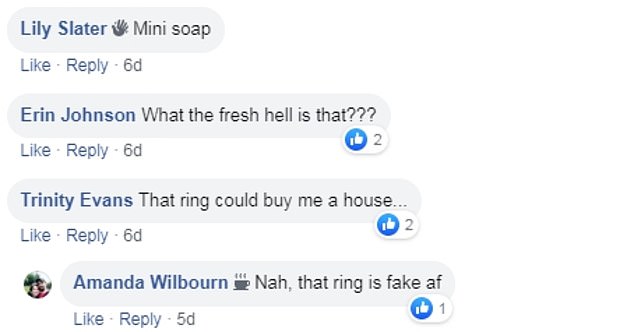 Dhar’s scavenger hunt started in Los Angeles and ended in Paris, the entire thing, of course, was filmed for their couple’s vlog.

On the first day, Dhar surprised Laura with an entire apartment, she later posted on her Instagram page: ‘OMGGGGGGGG it’s official! We just got a new home & it’s so KA-UTE.

‘Dhar just surprised me by scavenger hunt & the clue said the hunt will be going on for the next 7 days.’ 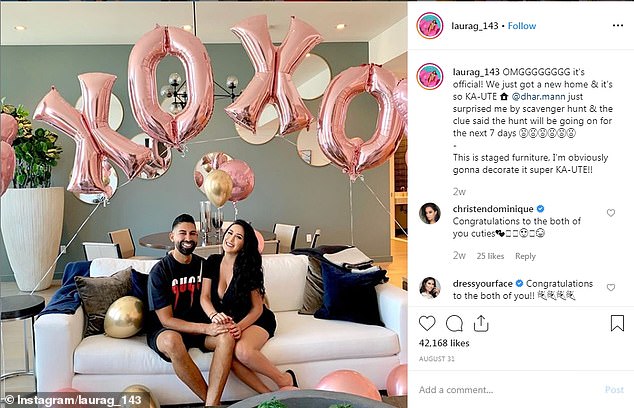 Laura had documented her scavenger hunt, with the first day surprise from Dhar an entire apartment for them to live in 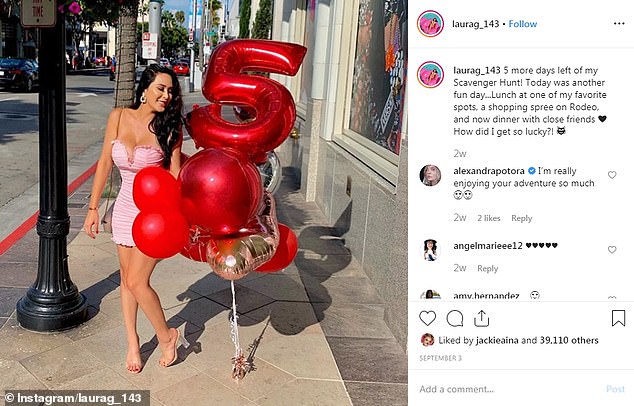 After a spa day with her family on day six, Laura was taken to Beverly Hills for a shopping spree courtesy of Dhar on day five

He then asked her parents for permission to propose, before taking Laura, her sister and her mother to the spa for a pamper day, followed by a pre-bachelorette party.

Dhar explained the third day was ‘all about spoiling her’, so he took her on a shopping trip to Beverly Hills, LA.

On the fourth day they went to Disneyland, LA, and then for the fifth day Dhar handed her plane tickets to Paris.

‘The sixth day was to set the mood and make it romantic, so I had a little surprise set up in our room in Paris,’ Dhar goes on. 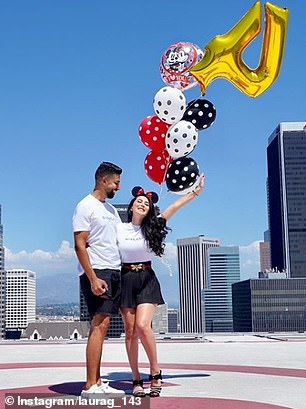 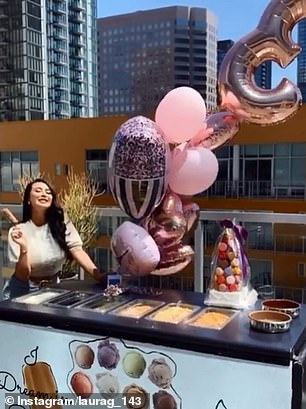 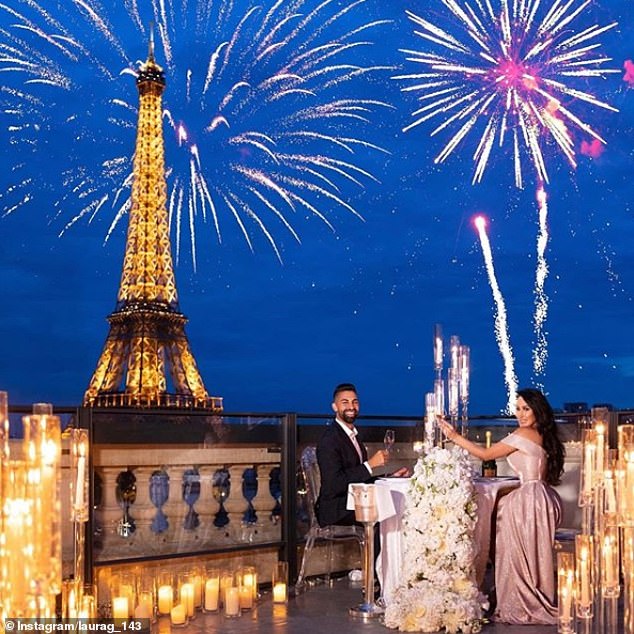 On the final day Dhar hired a private terrace with the Eiffel Tower as a backdrop, had violins playing her favourite music and surrounded by candles before asking for her hand in marriage

Rose petals were spread everywhere for their arrival and the balcony had perfect views of the Eiffel Tower.

Previously engaged Dhar, who asked his ex Shahs of Sunset star Lilly Ghalichi to marry him with a $1.2m ring back in 2014 before they later split, shared that Paris was his and Laura’s favourite place and had gone there right after they first met.

He hired a private terrace that looks over the Eiffel Tower and got down on one knee to ask Laura – already wearing a glamorous glittering gown – to marry him.

She said yes and the couple shared the news immediately on Instagram, Laura wrote: ‘He liked it, so he put a ring on it!’