The son of a billionaire entrepreneur who claims to have dated Lindsay Lohan and leads a life of ‘fast cars, beautiful women and parties’ is reduced to eating out of bins on this week’s Rich Kids Go Homeless.

Bobby Misner, 23, is the son of Tom Misner, founder of the SAE Institute music school, and has grown up wanting for nothing.

The rich heir frequently travels between London and LA in his private jet, has a wardrobe full of designer clothes and drives a Ferrari.

Bobby, who wants to build his own business as a film maker and photographer and believes in working hard to achieve a goal, poses as a homeless man in London for for a social experiment.

When it comes to people who live on the streets, Bobby claims their lifestyle is born out of being ‘lazy’ and accuses them of making ‘a career off benefits’. He’s confident that should he ever end up homeless, he’d manage to get off the streets in no time. 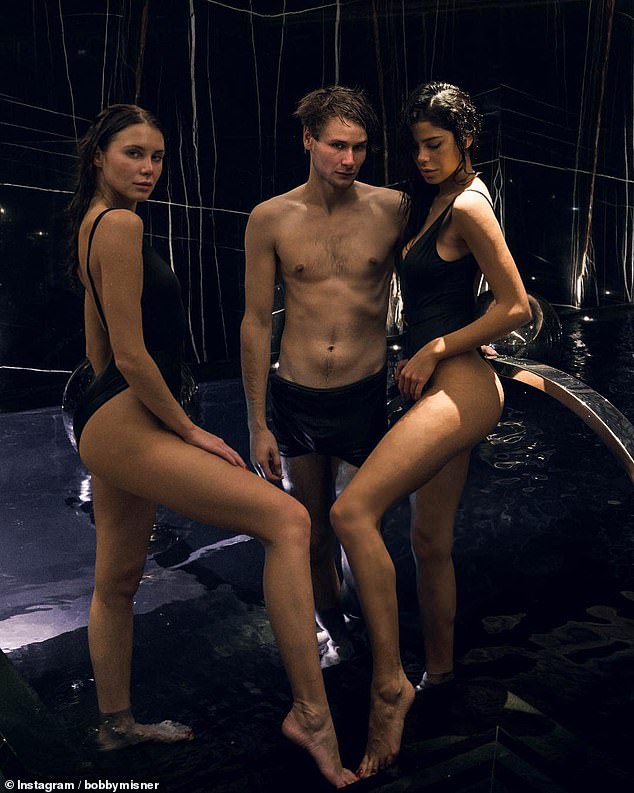 Rich heir Bobby Misner, 23, posed as a homeless man for three days to see how the poor live in this week’s episode of Rich Kids Go Homeless on 5Star 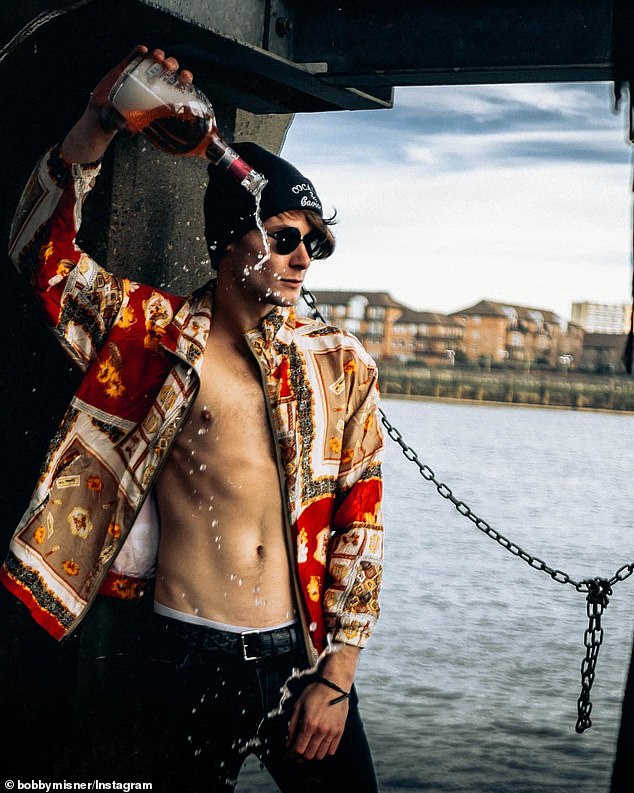 Bobby (pictured) is the young son of a billionaire and is used to living a champagne lifestyle. He trades his riches for rags to see how the homeless live for the social experiment 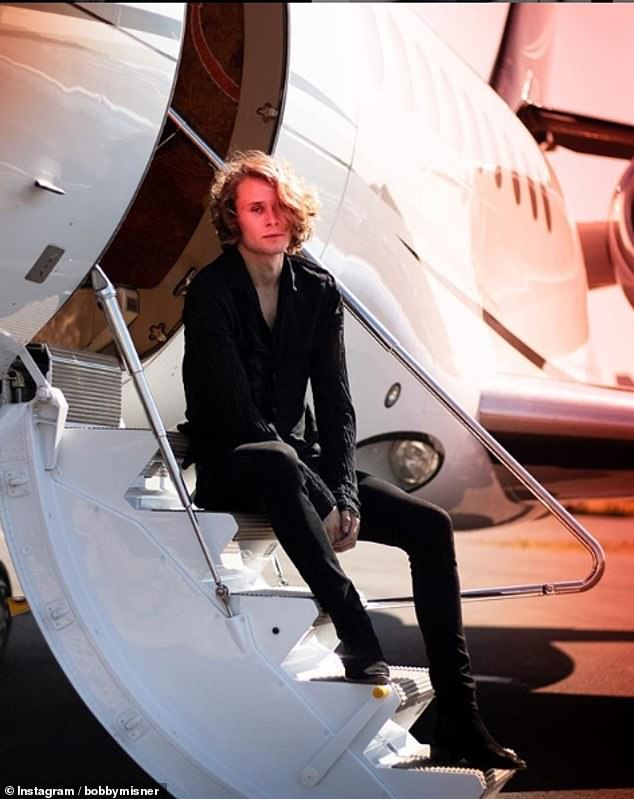 The rich heir’s views are challenged when he agrees to spend three days living as a homeless man in Soho, central London.

Used to being popular with women, Bobby banks on his charms to make a fast buck and begins his life on the streets asking beautiful women for money.

When his plan backfires and he’s left penniless, Bobby realises harassing women for cash might not have been a good idea and is forced to sleep rough.

‘Girls, what I’ve noticed, they tend to get scared,’ he concedes. 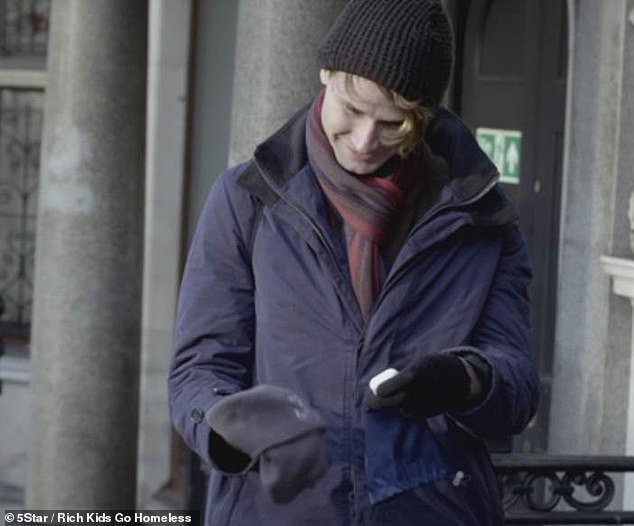 On his second day as a homeless man, Bobby finds a pair of ear pods on the streets while foraging 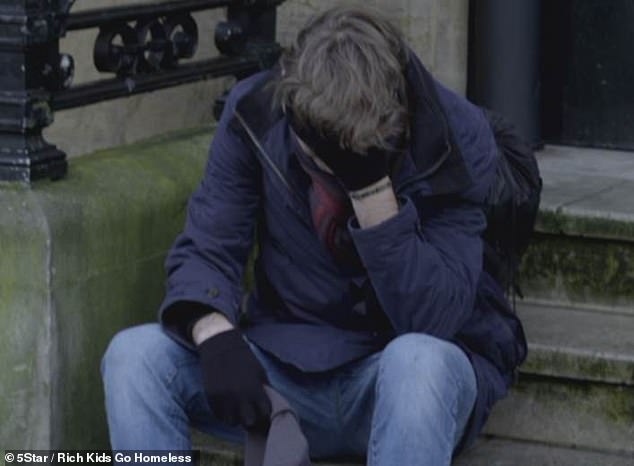 ‘It usually tends to go well for me [with girls]. It’s really weird having them stand offish like that.

‘It’s pretty tough,’ he adds, admitting that he could not survive by begging.

While building a makeshift bed on the wet pavements, he says: ‘I’ve experienced so many emotions tonight that I would normally never experience.’

After a cold night on the street, a starved and tired Bobby resorts to foraging through bins – or ‘scattered litter’ as he puts it – for some food and peering in telephone boxes for coins. 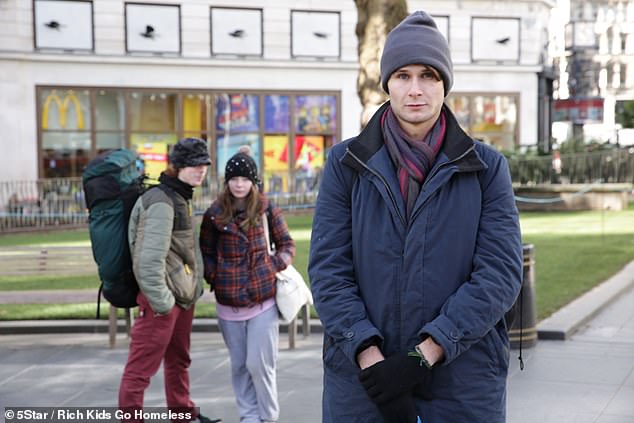 On the third day of his experience, Bobby meets Aaron and Demi (background), who take him under their wing 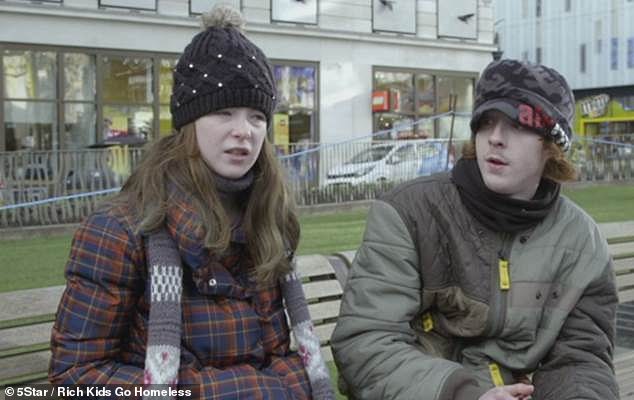 The young couple have been homeless on and off for the past three weeks. They arrived in London five months ago after being kicked out of their accommodation 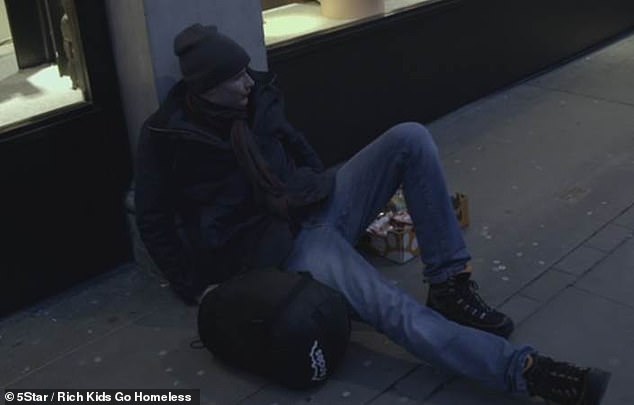 Having enough money to book a place in a dorm, Bobby thought he had made if off the streets, but as he doesn’t carry ID, he is refused by a nearby hostel and left disheartened 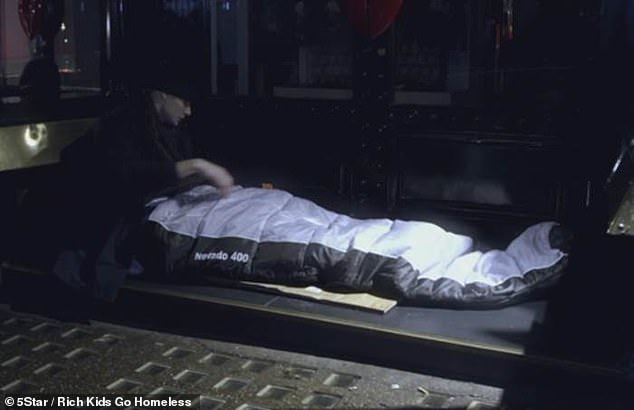 After trying to use his charms with women to beg for money and failing, Bobby has to sleep rough

The young man breaks down when he stumbles upon some headphones and a beanie that a passer-by has dropped by accident.

‘It’s like finding a treasure in the place I had just no hope,’ he says through tears.

Thanks to his find, Bobby’s plan to get off the street is back on track. He sells the pricey earphones to an electronics shop for £40.

With that cash, Bobby buys multipacks of crisps that he hopes to sell on the streets by the entrance of a tube station.

Having managed to keep his £40 but failed to make a profit, Bobby hopes to find some accommodation for the evening – but he against is confronted with reality as hostels won’t accept visitors without ID. 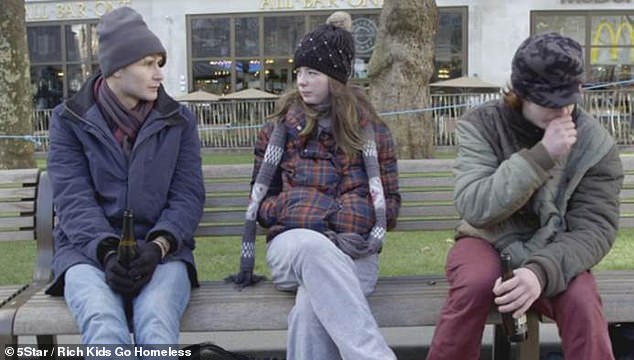 The heir is forced to sleep rough for a second night. Bobby compares his situation to ‘fighting an uphill battle’ and adds that he understands why some homeless people turn to drugs and alcohol.

‘You don’t want to live sober because life just sucks,’ he reasons.

On Bobby’s last day as a homeless man he meets Demi and Aaron, both 20, who take him under their wing for the day. 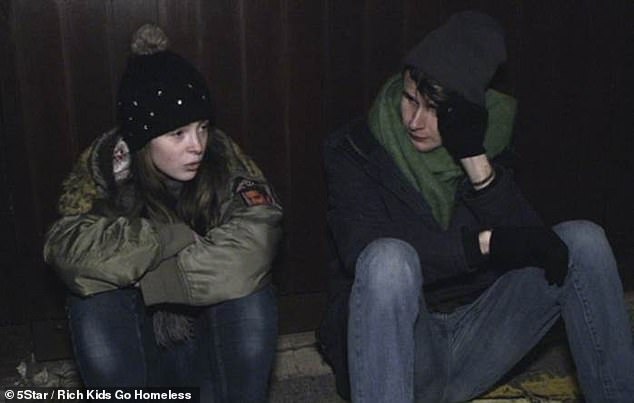 A heartbroken Demi explains to Bobby that her child was taken away from her right after birth, as the couple were deemed unfit by social services

The young couple from Middlesbrough arrived in London five months ago after being kicked out of their accommodation, but they’ve been homeless on and off for the past three years. Demi tells Bobby she has never possessed more than £700.

The couple teach Bobby how to beg for money and the wealthy young heir realises that well-off people tend to give less than the ‘not so rich’, which is a big reality check for him.

‘It’s hard to know who to trust,’ Demi tells him, adding that she’s already been attacked while living homeless.

Demi and Aaron met while in care and have two children together; one of them passed away and the other, a five-month-old baby girl, was removed from their care by social services. 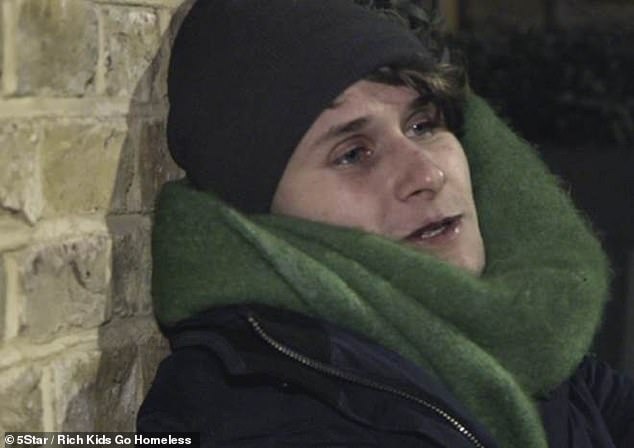 ‘All we want to do is have our kid with us,’ a shaken Aaron tells Bobby, who admits later he understands that the longer you are homeless the harder it is to get off the streets and start afresh.

Bobby is later moved to tears after listening to Demi’s side of the story.

When Bobby asks her why the couple have been homeless for so long, the young girl explains that leaving the streets is not so easy.

‘We’ve tried,’ she says. ‘And when you’ve tried for so long you sort of give up.

‘We could have given her the world if they’d given us the change. Now they’ve taken our work away from us and what have we got now?’ 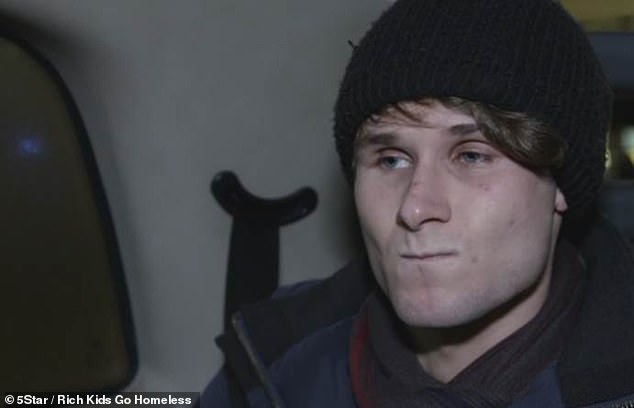 On his way back home, Bobby vows to never take anything for granted and to be grateful for what he has

Demi admits she feels like she has ‘nothing to fight for’ anymore, adding all she ever wanted was a family.

‘All she really wants is a home,’ Bobby later says. ‘She’s had a lot taken from her.’

‘You’re alive [when you’re homeless], but you’re not living,’ he adds.

At the end of the experience a taxi arrives to take Bobby home – and the young heir is a changed man after three days spent battling for survival.

He calls the experience ‘one of the toughest things [he’s] ever done’ and says he’s realised getting off the streets is much for difficult than he had ever imagined.

‘I was slightly guilty of being a little prejudiced before,’ he admits, adding that his opinion has now completely changed.

‘I’m going to be so grateful for the things in my life, and I’m not going to take anything for granted.’

At the end of the episode it is revealed that Bobby, Aaron and Demi are still in contact and that the couple have visited the heir, who’s given them a makeover.