Restaurant workers have shared some of the tricks they use to get customers to order more, spend more — and tip more.

Waiters past and present have divulged some of their secrets in a Quora thread, revealing the subtle behaviors, body language, and verbal nudges they give diners to encourage extra spending.

Sometimes it’s as sneaky as a well-timed head nod, or taking a circuitous route to a table with an extravagant dish — but in most cases, the tricks are easy enough to spot for budget-conscious customers who are paying attention. 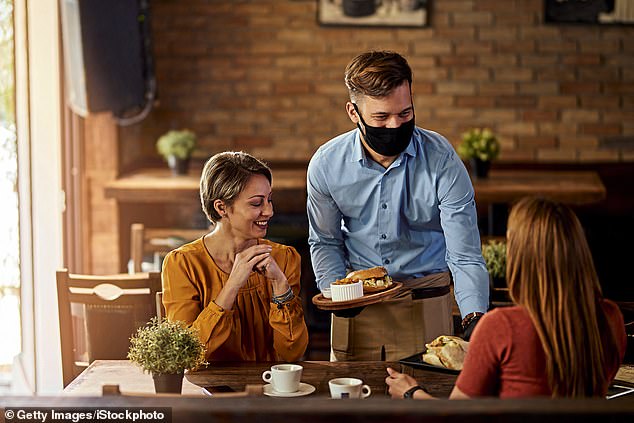 Spill! Restaurant workers have shared some of the tricks they use to get customers to order more, spend more — and tip more (stock image)

They nod while describing something they want you to order

Quora user Darek Tidwell highlighted several of the most-used tricks, including the use of the ‘Sullivan Nod’ — named after restaurant consultant Jim Sullivan

‘While a waiter is describing something to you, they will slightly nod there head yes if they want you to order it,’ said Tidwell.

Sullivan explained: ‘This great piece of body language can increase incremental sales as much as 60%. Salespeople should smile and slowly nod their head up and down as they suggest an item to a customer. You’ll be blown away by the fact that over 60% of the time the customer nods right back with you and takes your suggestion.

They steer you toward a wine

Waiters might steer a customer toward a certain wine at a not-too-pricey — but not cheap, either — price point by suggesting three: One will be cheap, one will be ‘absurdly expensive,’ and the third will be ‘the one they want you to order.’

This one is ‘closer to absurd but just above the price you would have paid had you know anything about wine in the first place,’ explained Tidwell.

They over-pour when you order a bottle

‘When you order a bottle of wine (especially in a banquet or corporate party setting) the servers will lush you up and pour to the top of the glass,’ Tidwell went on.

‘More bottle sales means higher check average and both usually mean more gratuity. Sometimes you are lucky if all the bottles paid for even make it into the dining room.’

They show off big-ticket orders

Tidwell explained that when a table orders something pricey or spectacular, it will be brought out by the longest route possible, passing more tables and eyes on the way.

This way, parties that haven’t ordered yet might have their interest piqued.

The trick works for drinks, too: Alison Bourke, who worked at Sheraton Hotels & Resorts, said sometimes workers would even mix up a colorful cocktail that no one ordered and walk it around the room as if to deliver it, giving diners a chance to see.

‘People can be very “see one, want one” with things like that,’ she said. ‘One manager I worked with said this was successful for him about 80 percent of the time.’

Waiters might suggest add-ons that aren’t on the menu, like topping an entree off with bacon or a dessert with gelato — and of course, that comes at a fee, though diners don’t always think of that in the moment.

Quora user Gabriela Martinez, who used to work at a Mexican restaurant, noted that waiter never say how much extra something will cost.

Some waiters might try to take a child’s order the same way they would an adult, suggesting chocolate milk or a Shirley Temple to go with their chicken fingers.

Paying extra attention to kids at the table can also make parents willing to leave a better tip.

They help you drink faster

Martinez, the former Mexican restaurant waiter, said that frozen drinks like margarita often take longer to finish than non-frozen drinks. So waiters might put two straws instead of one to help the person drink faster and order more.

Another Quora user, Ray Lancaster, wrote that waiters may subconsciously encouraged diners to top more by lightly touching the arm of the person most likely to pay.

They sweeten the deal