A restaurant owner has refused to apologise after mocking a ‘spoiled’ coeliac customer and claimed he couldn’t cater for her ‘whims and demands’ in a scathing Tripadvisor rant.

Natasha Tunmore, 31, from Yorkshire, left a one star Tripadvisor review slamming Zammuto Steak and Grill House in Doncaster after waiting staff were allegedly flippant regarding her coeliac disease.

The customer claimed staff said they were ‘too busy’ to check if items contained gluten and only did so when she complained how ‘uncomfortable’ they were making her last week.

But sarcastic owner Giuseppe Zammuto left a biting reply to the negative review, branding her ‘selfish’ and blaming Eat Out to Help Out for leaving his restaurant ‘busier than they’d ever been.’

Natasha Tunmore, 31, left a one star Tripadvisor review slamming Zammuto Steak and Grill House in Doncaster, after waiting staff were allegedly flippant regarding her coeliac disease

Natasha explained: ‘I have been diagnosed as coeliac coming up to six years and I have never had anything even similar happen to me.

‘It’s taken a long time to feel confident enough to eat out and ask the relevant questions.’

She claimed: ‘I contacted the restaurant in advance to check that they are able to cater for this before booking. I was advised that this would be okay.

‘Upon arrival all was well and we got our seats and drinks quickly.’ 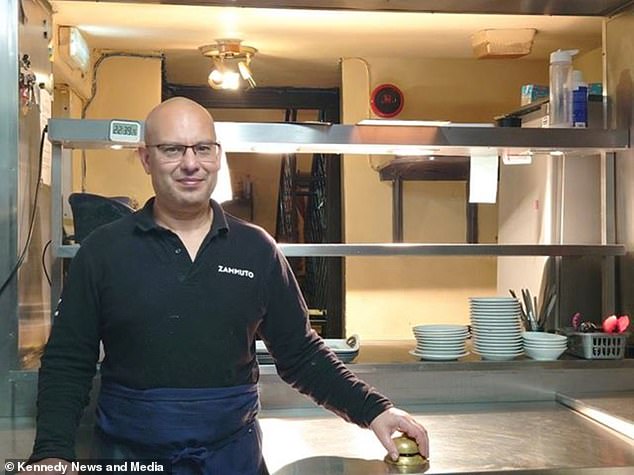 Owner Giuseppe Zammuto left a biting reply to the negative review, branding her ‘selfish’ and blaming Eat Out to Help Out for leaving his restaurant ‘busier than they’d ever been’

But when she asked about some of her menu choices with a waiter, she said the waiter told her he was ‘too busy to check with a chef’.

She explained: ‘I told him he was making me feel really uncomfortable and I had never experienced anything like this in my life.

‘If this had happened to me when I had been newly diagnosed I am sure I would have burst into tears. All of this was very abrupt and intimidating.’

When she pushed him further, she said he eventually checked but told her she could only have the blue cheese sauce. 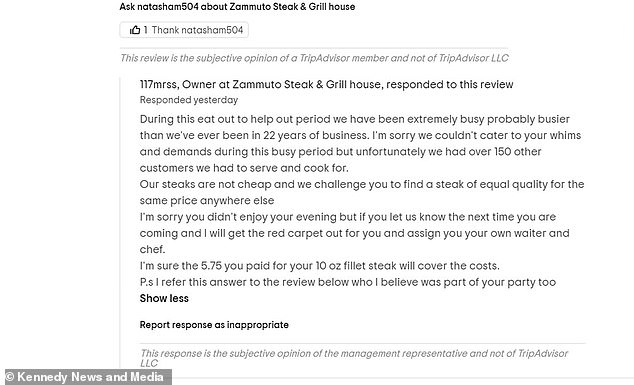 However a separate waiter later told her the only sauce she could have was the spicy tomato, which had been taken off the menu.

The 31-year-old was horrified when her original waiter then warned her that the chef advised that she ‘eat the food at her own risk’.

She said: ‘When the waiter came back to clear the starters he again made a point of telling me that he had asked the chef about my food and he too had said they are too busy for this and that I should eat my food at my own risk.

‘I felt at this point that the waiter’s pride had gotten in the way of rectifying the issue he was causing and he maintained his abrupt attitude right through to the end.

WHAT IS COELIAC DISEASE?

Coeliac disease is a genetic autoimmune disorder in which gluten leads to damage in the small intestine.

Gluten provokes inflammation in the small intestine which affects the body’s ability to absorb nutrients from food.

The condition is estimated to affect one in 100 people worldwide.

One percent – or three million Americans – are living with coeliac disease.

There are more than 200 symptoms of coeliac disease but the more common ones are:

The only treatment for the disease and is a strict gluten-free diet.

Only foods and beverages with a gluten content less than 20 parts per million are allowed.

‘I felt embarrassed and awkward and throughout the meal. My friends asked if I wanted to leave. I did not want to ruin their night too so we stayed.

‘I allowed this to happen very quietly and we left quietly. We paid the full bill and didn’t even hang around for any change. We just wanted to get out of the horrible situation.’

After the meal left her feeling ‘uncomfortable and intimidated’, Natasha shared the review and reply online to other coeliac sufferers.

And, after initially apologising for the way he spoke to the customer, the 52-year-old chef then ‘retracted his apology’ – instead claiming his staff did nothing wrong and that the customer was simply ‘selfish’.

Responding online, Giuseppe wrote: ‘During this eat out to help out period we have been extremely busy probably busier than we’ve ever been in 22 years of business.

‘I’m sorry we couldn’t cater to your whims and demands during this busy period but unfortunately we had over 160 other customers we had to serve and cook for.

‘[…] I’m sorry you didn’t enjoy your evening but if you let us know the next time you are coming and I will get the red carpet out for you and assign you your own waiter and chef.

Natasha was left stunned by the response and went on to share it on Facebook with others leaving a spate of reviewers leaving the restaurant one star reviews.

Giuseppe went on to apologise online, writing that the night had been the restaurant’s ‘busiest night ever’ and a ‘miscommunication’ in the kitchen meant they were unable to give Natasha a satisfactory answer to her dietary queries.

He claimed he was retraining staff on which allergens were present in the food and had cancelled all further bookings and walk-ins during the Eat Out to Help Out scheme to prevent it from happening again.

He also claimed to have ‘learned his lesson’ about replying to Tripadvisor reviews in the future and has vowed to not do it again.

Giuseppe, who had been working as a chef on the evening in question, advised any future customers with dietary requirements to talk to him directly before they ordered so he could discuss their menu options.

Giuseppe said: ‘I shouldn’t have written it. I admit it. I made a mistake, I was angry.

‘I had just worked 13 hours straight and I was getting this aggro from someone when I didn’t see what I did wrong. I shouldn’t have written it, but it happened. Then I got all that abuse from all these people I didn’t even know. 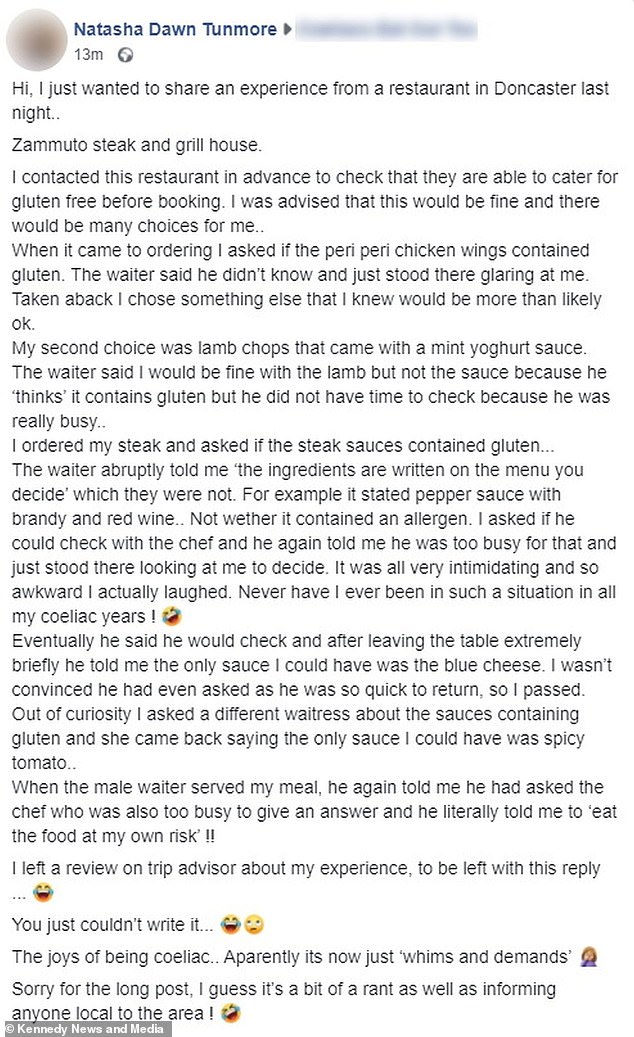 Natasha went on to share her experience, as well as the restaurant owner’s biting response, on a Facebook group online

‘Obviously with this Eat Out to Help Out scheme, we’ve been extremely busy. I’ve been in this job 22 years and I’ve never, never [seen it this busy].

‘On that particular night it was the busiest night we’ve ever had. Somebody was in who was a coeliac. I work in the kitchen as a chef.

‘I understand she’s a coeliac, we’ve dealt with many coeliacs, people with allergies and also people who are just fussy eaters. We haven’t got a problem with that. 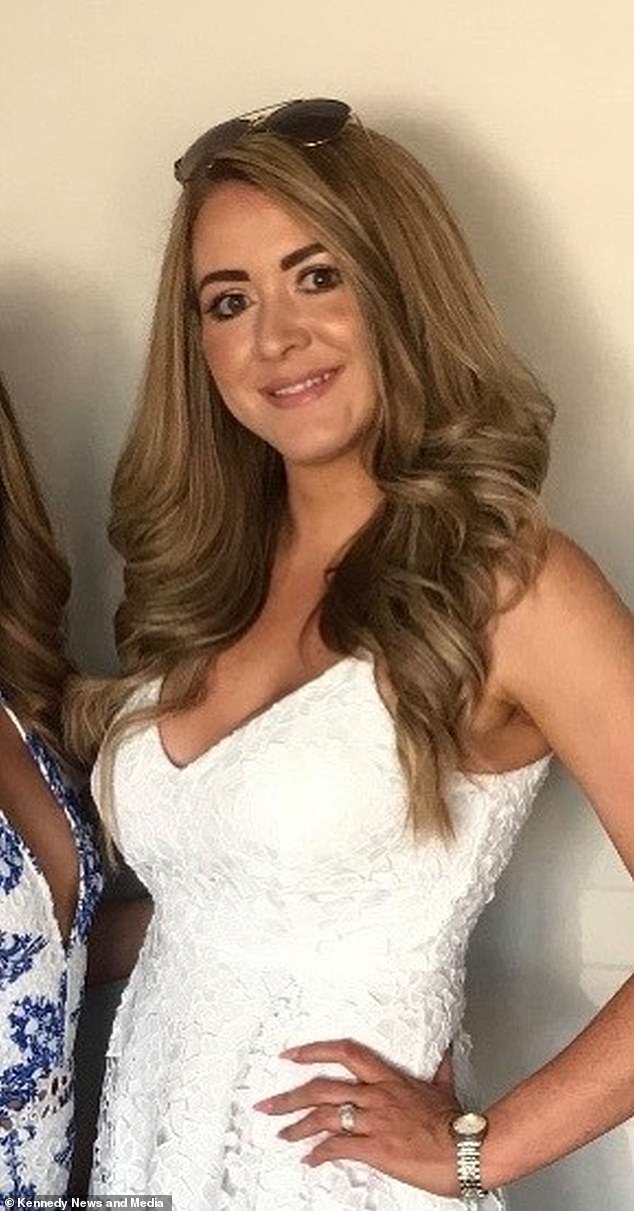 ‘It’s not because we didn’t want to do it for her, it was just that physically we couldn’t take the requests as much as we could on a quieter night if she had pre-told us.

‘We were extremely busy and we had customers complaining because they were waiting for food. We have to try and treat everyone equally and fairly.

‘This particular table were taking up the waiting staff and kitchen staff’s time more than anyone else. That’s not a problem – we understand people have dietary requirements. 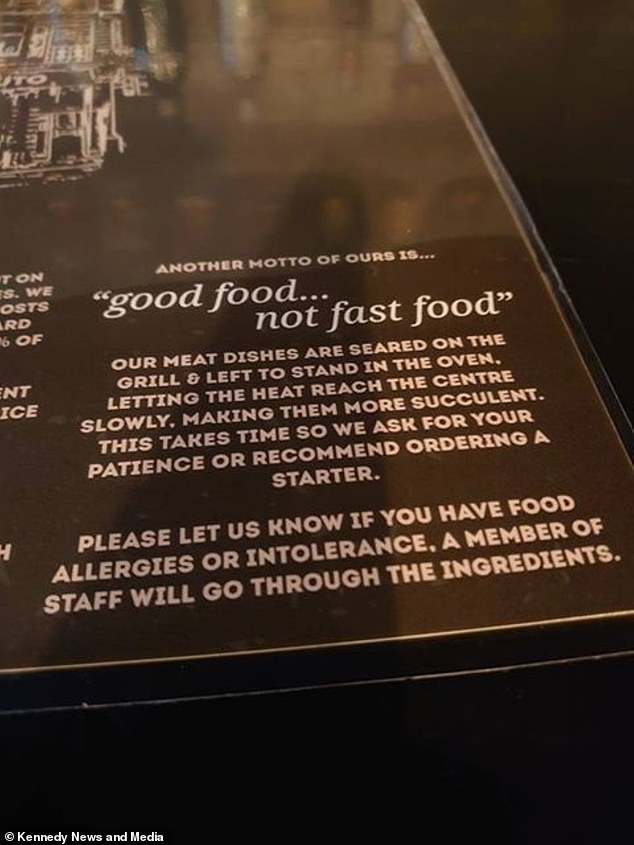 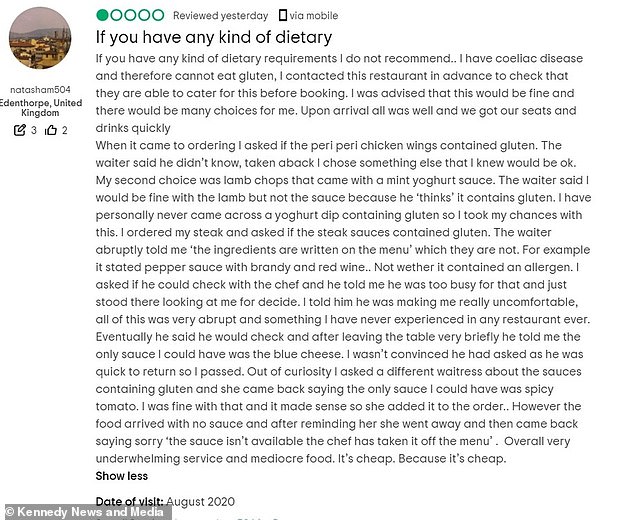 ‘It just happened that we made a mistake. [When I saw the review] I was a bit upset. I did put ‘whims and demands’ because, like I said, we were getting demands.’

He continued: ‘We had quite a few in the kitchen [from other customers] and I was trying to get all the other checks out at the same time.

‘It was no way meant for coeliacs, it was just meant for her personally. I meant that she was out of order to tell me I don’t know what I’m doing or I don’t care, because I do care. 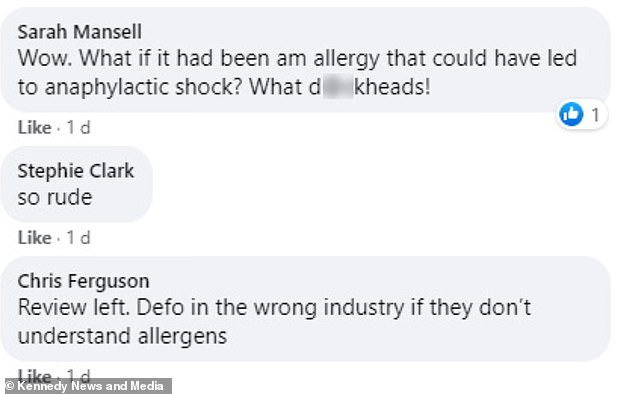 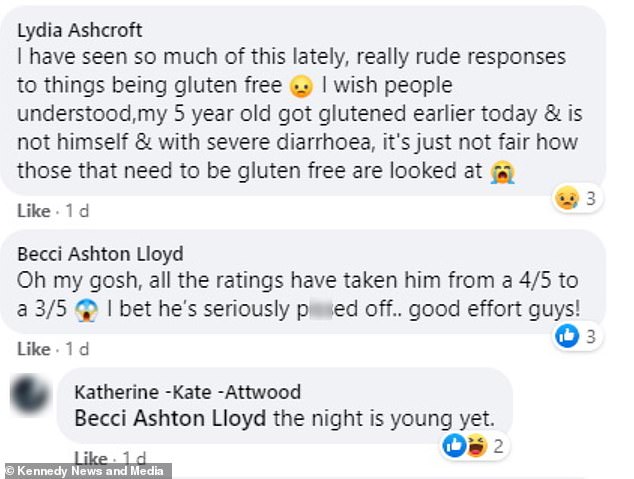 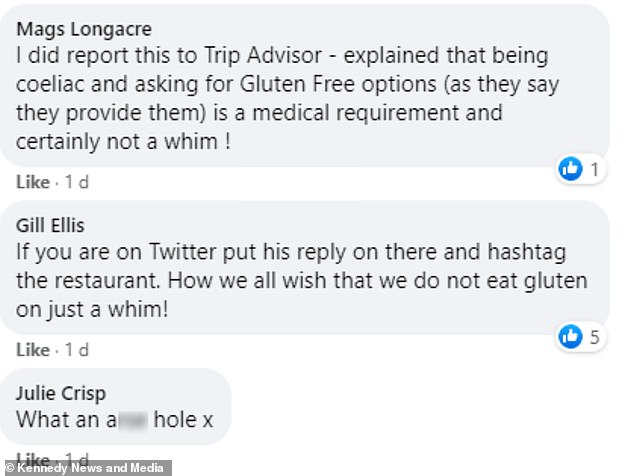 After Natasha shared his response online, other allergy sufferers flooded the restaurant with poor ratings and reviews

‘We haven’t cancelled the EOTHO scheme. We only have certain times left, so we’ve just closed the book. Basically we’re not taking any more bookings.

‘We just don’t want another situation like this to occur so we’re refusing customers.

‘If anyone is coeliac, they should come to the kitchen personally and ask me, and we can go through what they can and can’t have.

‘That’s what I’ll say on quieter evenings, ‘tell them to come into the kitchen and we can discuss it’.’ 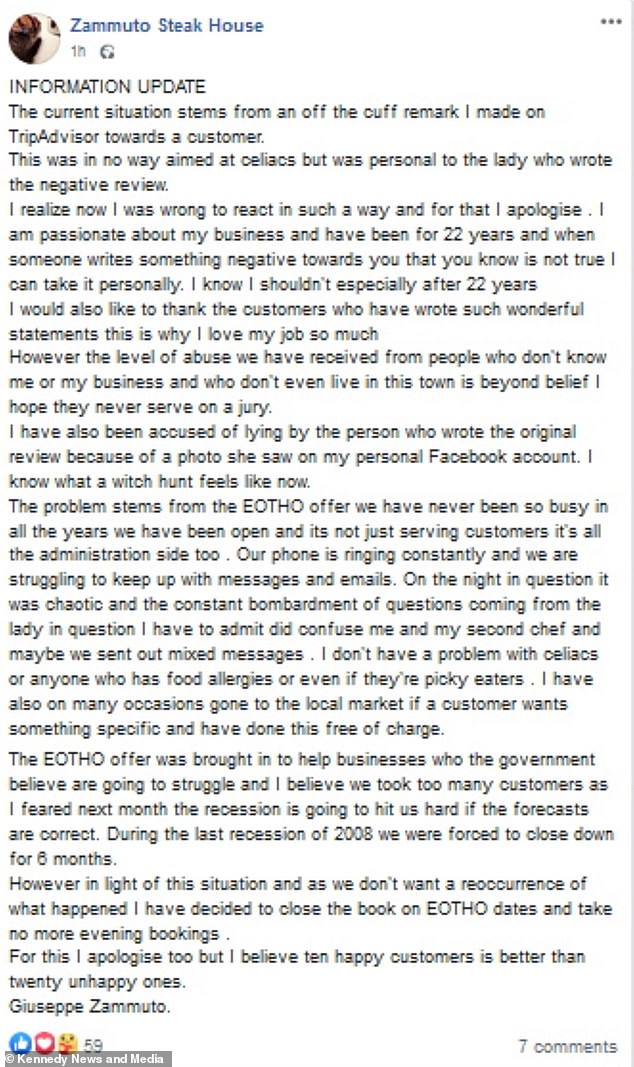 However Giuseppe followed up these comments the following day and claimed that after discussing the incident with staff he felt they had done nothing wrong.

He blamed the issue on Natasha’s decision to listen to the young, inexperienced waitress instead the more experienced waiter who had been on his staff for 15 years.

Giuseppe said: ‘In a nutshell the lady in question didn’t care about the other diners but was selfish in her actions regardless of whether she was a coeliac or not. 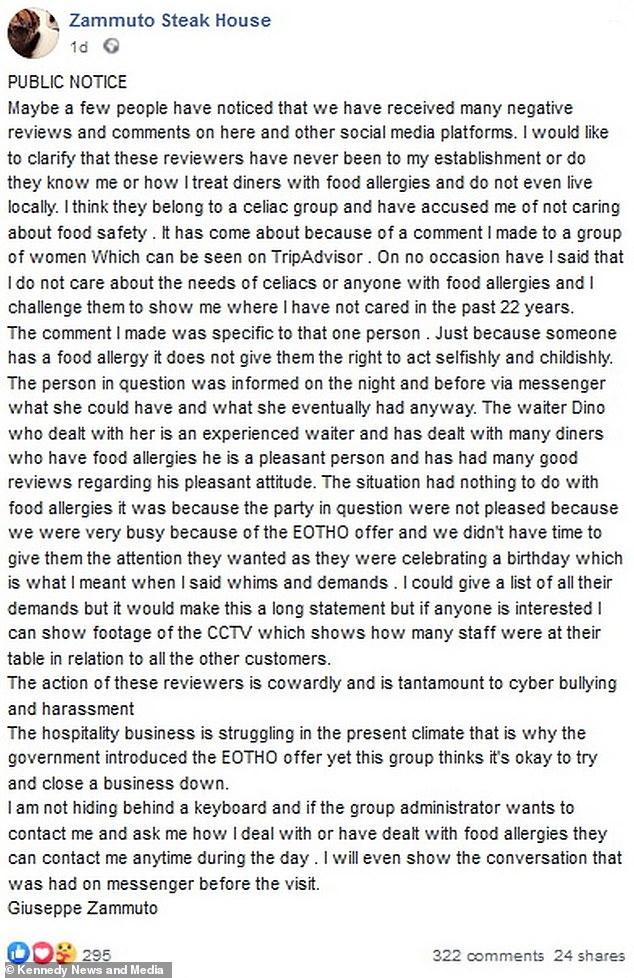 However the restaurant owner went on to retract his apology, and said he had been subject to ‘cyber bullying and harassment’ as a result of Natasha’s review

‘You asked me yesterday whether I was sorry to the lady and I said yes because of all the vile statements I’ve been getting.

‘But I would like to retract my apology as I realise now after reviewing all the information that we didn’t do anything wrong and we did the best and correct thing under the conditions we were in. We in no way alienated her because she was a coeliac.’

However Giuseppe acknowledged that his remarks were ‘unprofessional’ and said that he had ‘decided to abstain from answering reviews on all social media sites.’

What is Eat Out to Help Out?

Under the scheme, which came into force earlier this month, restaurants charge customers half price – up to £10 per diner – on Mondays, Tuesdays and Wednesdays and then claim the money back from the Government.

However the move has now seen a number of restaurant bosses pulling their venues out of the discount scheme – with some claiming the initiative was actually losing their business money.

Disgruntled staff working across the nations eateries have shared their frustration after being met by ‘rude’ customers eager to take advantage of the government scheme.

When is it available?

It runs every Monday, Tuesday and Wednesday from August 3 to 31.

A 50 per cent discount when you eat in up to a maximum saving of £10 per diner. The business reclaims the value of the saving from government.

What establishments can take part?

What are the restrictions?

No discount on alcoholic drinks or service charges.

Do I need a voucher?

No. The discount will be automatically applied by the participating outlet. The saving can be used alongside other offers and discounts.

How do I find participating outlets?

What about chain restaurants?