Queen Maxima of the Netherlands was all smiles as she attended a school concert to mark the nation’s Music Table Day.

The occasion encourages regional representatives, municipalities and teachers to come together and discuss how to best promote music lessons at school.

Mother-of-three Maxima, 49, headed to the Theaterhangaar in Katwijk for the event organised by the Méér Muziek in de Klas (More Music in the Classroom) Foundation earlier today.

Dressed in a stylish floral silk dress in white and blue, the Dutch royal was treated to a concert by local pupils. 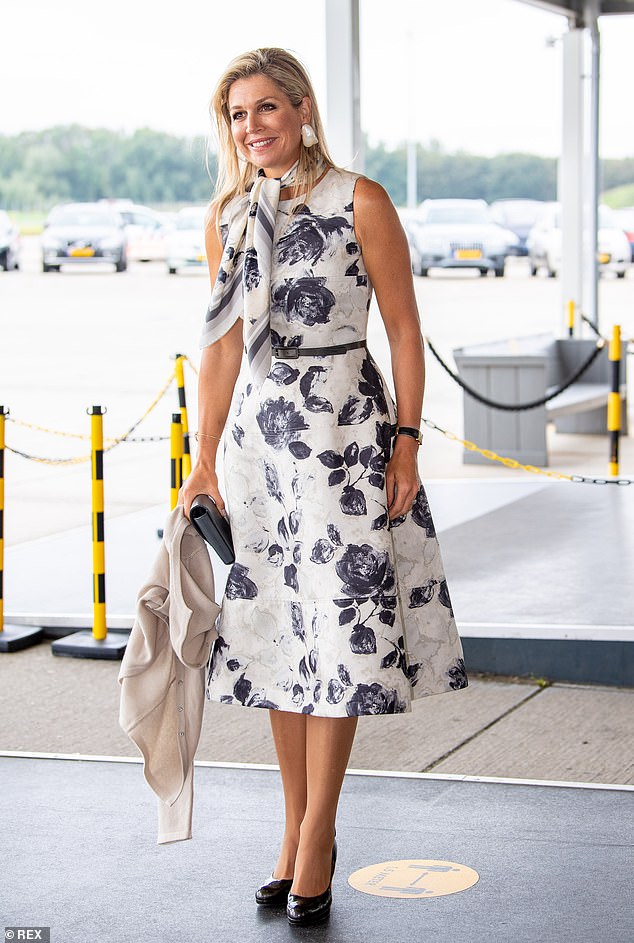 Queen Maxima was all smiles as she attended a concert on the Netherlands’ Music Table Day. The Dutch royal, 49, headed to the Theaterhangaar in Katwijk for an event organised by the Méér Muziek in de Klas (More Music in the Classroom) Foundation earlier today 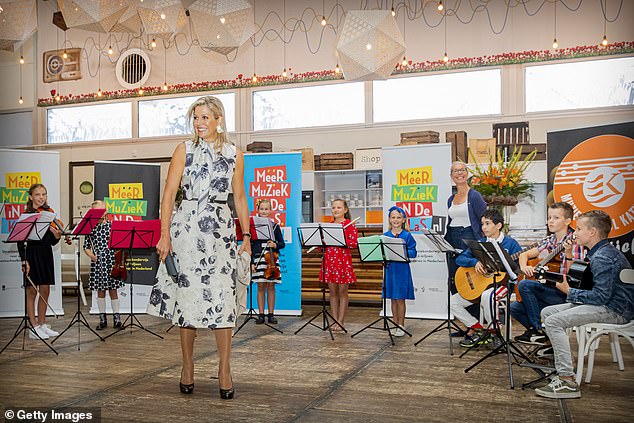 Dressed in a stylish floral silk dress in white and blue, the mother-of-three was treated to a concert by local pupils

She also met with regional representatives to discuss how to best promote sustainable music education at school.

The Méér Muziek in de Klas was established after the Dutch Ministry of Education, Culture and Science commissioned the Gehrels Committee in 2014 to draw up guidelines for music education in primary schools.

For this day of music, Maxima, who is the honorary chairman of the Foundation, opted for a smart silk dress in white and navy blue, with a floral motif.

She wore the stylish number with a scarf of the same pattern loosely tied around her neck. The dress was fitted at the waist by a thin black leather belt.

To complete her outfit, the Dutch Queen picked black leather heels and a clutch of the same colour and material. 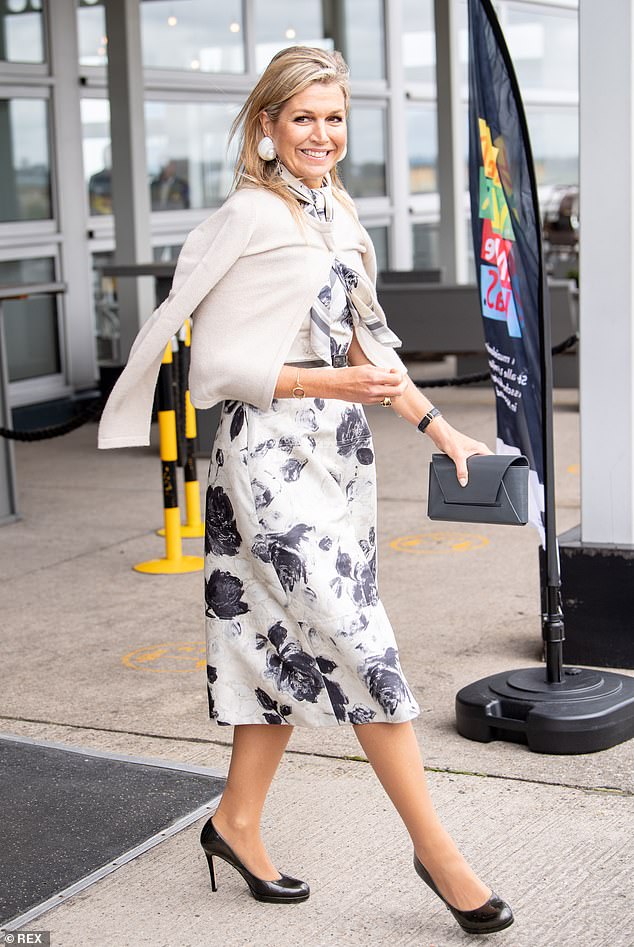 Always prepared! Maxima made sure to take a cardigan with her on the outing to wrap up from the chilly September breeze 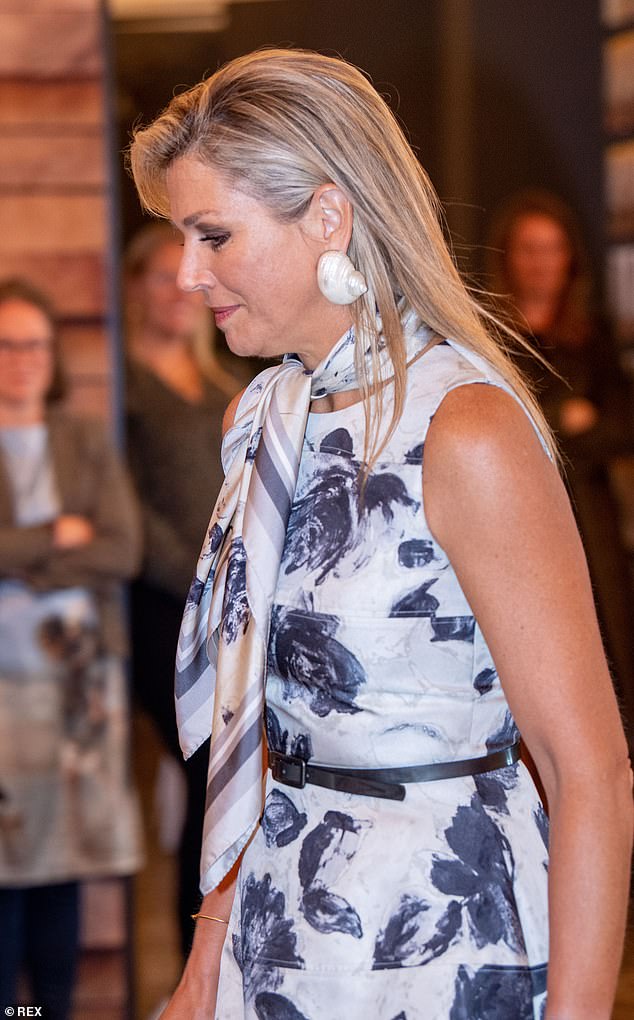 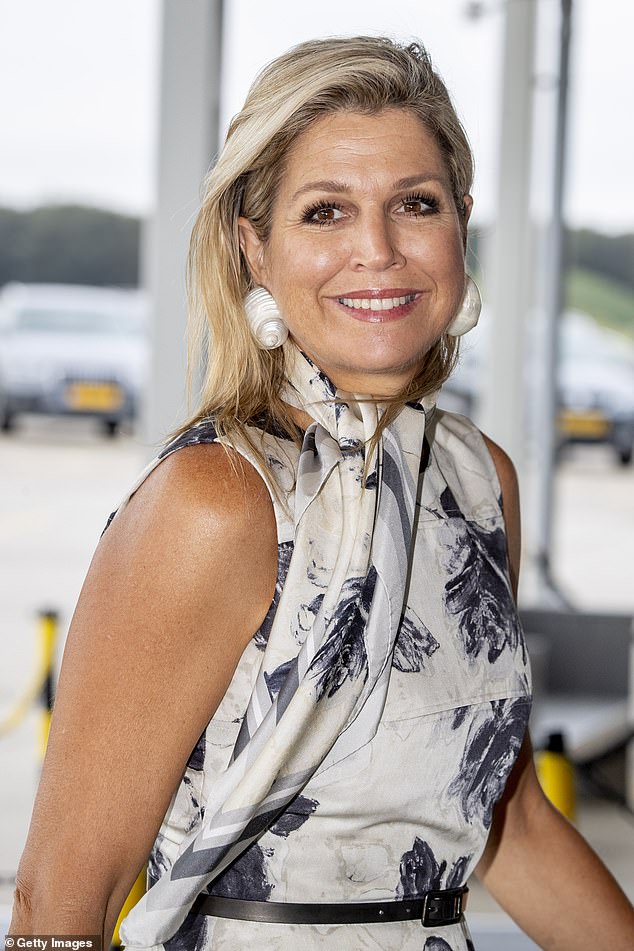 She accessorised with a slim watch, also in black, and statement earrings shaped like seashells.

The royal was carrying an eggshell cardigan which she casually let rest on her shoulders during the round table later at the event.

Sporting a natural makeup that complimented her healthy complexion, Maxima opted for a dash of eyeliner and mascara and a light blush for the occasion.

Her blond locks were perfectly styled in a natural blow-dry and tucked behind her ears so to bring the focus on her choice of earrings. 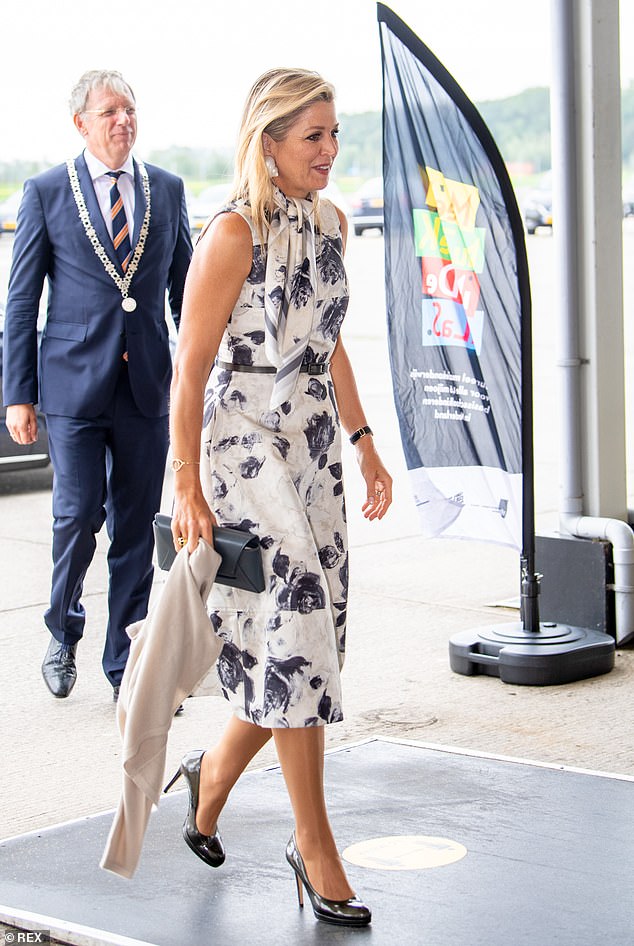 Making an entrance: The Dutch queen, looking particularly stylish in the white and blue number, beamed as she arrived 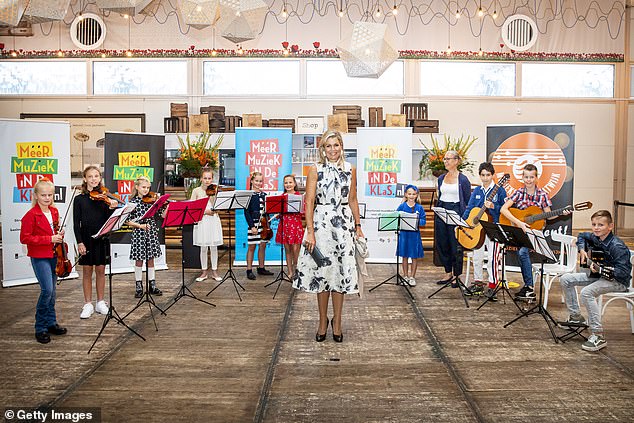 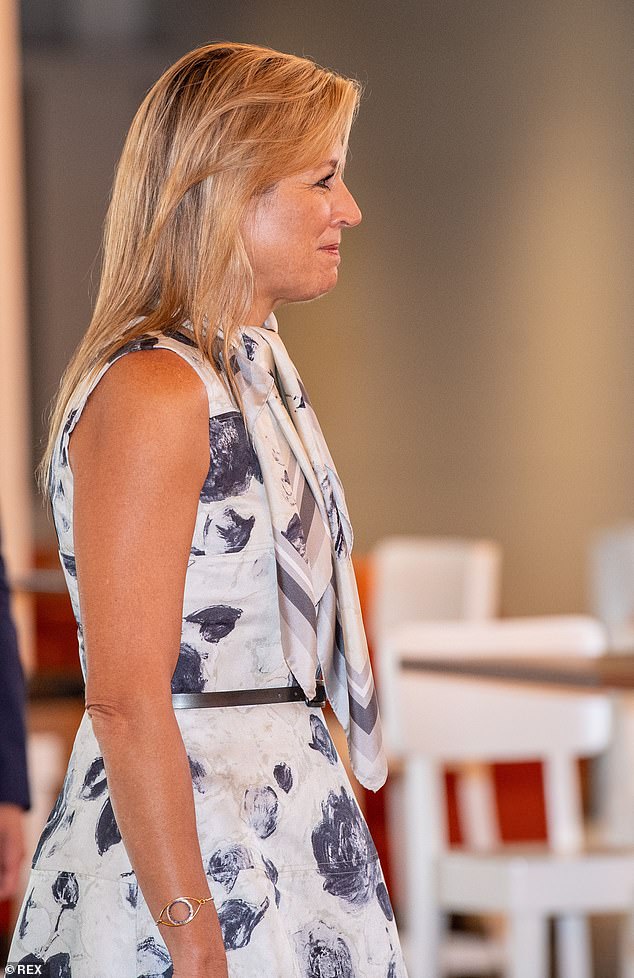 Maxima, still sporting a tan from her recent Greek holiday, looked relaxed during the event this morning

During the event, Maxima met with local representatives for a round table where they discussed how they had achieved successful music programmes in their region and the future of music education in the classroom.

She was then treated to a concert by local pupils who delighted her with their music.

Music Table Day is the occasion for regional representatives, municipalities and teachers to come together and discuss how to best promote music lessons at school. 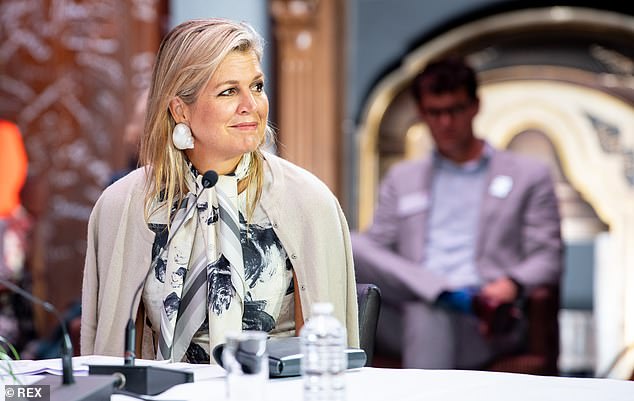 During a round table on music education across the country, Maxima let her cardigan rest on her shoulders 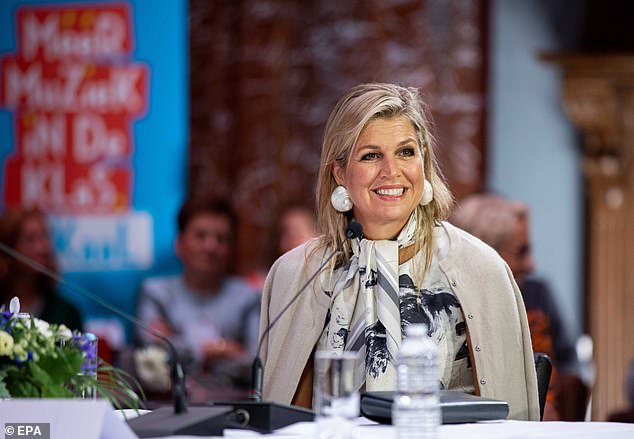 Looking in good spirits, Maxima listened to regional representatives and other participants discuss how to best promote music education in the Netherlands 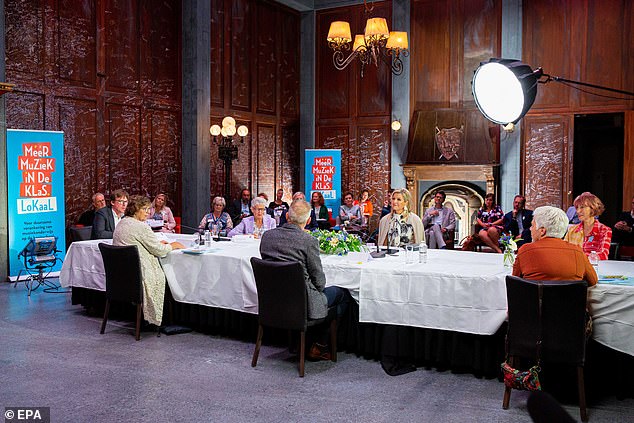 The campaign by the Méér Muziek in de Klas Foundation, also called More Music in the Classroom, aims to achieve structural music education for all 1.6million primary pupils in the Netherlands.

The aim is for music lessons to be a standard part of the curriculum at every primary school in the Netherlands by 2020.

Trainee primary teachers will need to gain enough confidence to make music and learn the technical skills to teach the subject. 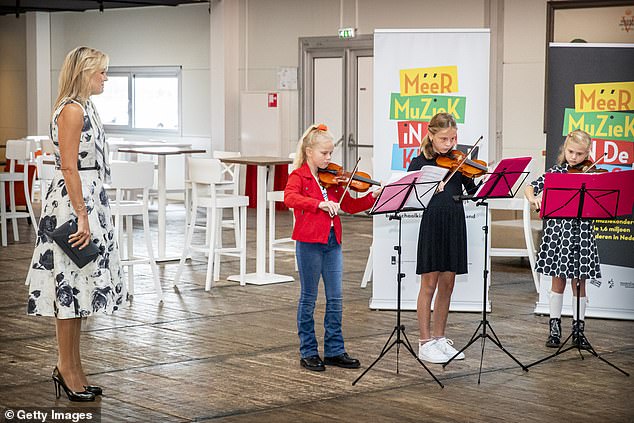 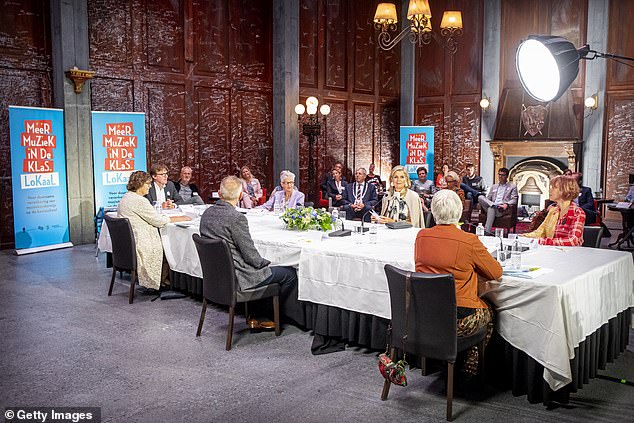 The event was held on Music Table Day as part of the More Music in the Classroom campaign, of which Maxima is the honorary chairman

The new grant scheme will give schools an incentive to provide high-quality music education for their students.

An important condition is that they work together with colleges of music.

Applications for projects under the grant scheme must show how the school intends to make high-quality music education a permanent fixture in teacher training.

Maxima has been very active in the initiative, with several visits to local schools in order to discuss how the campaign was getting on, meeting with both pupils and teachers. 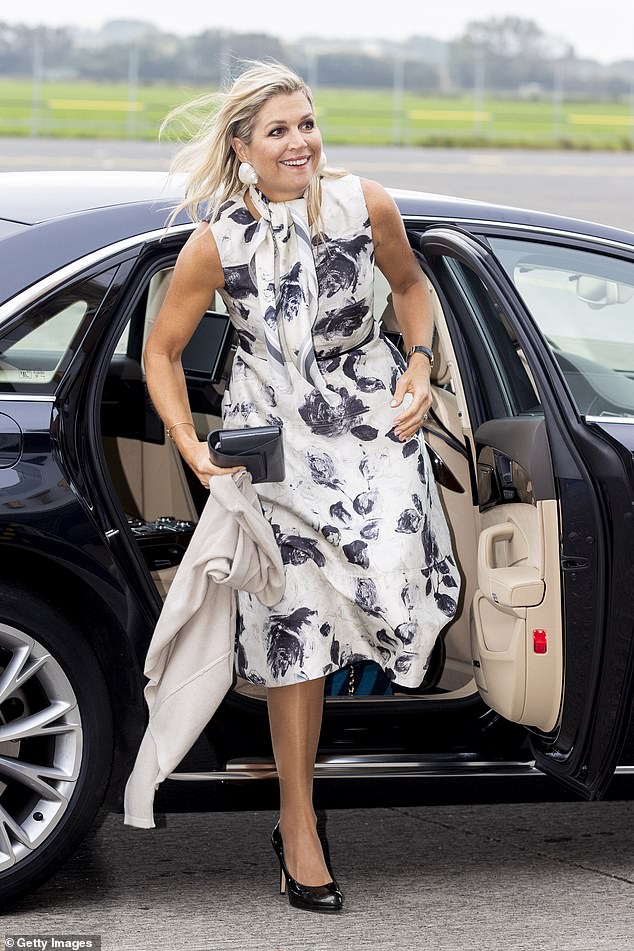 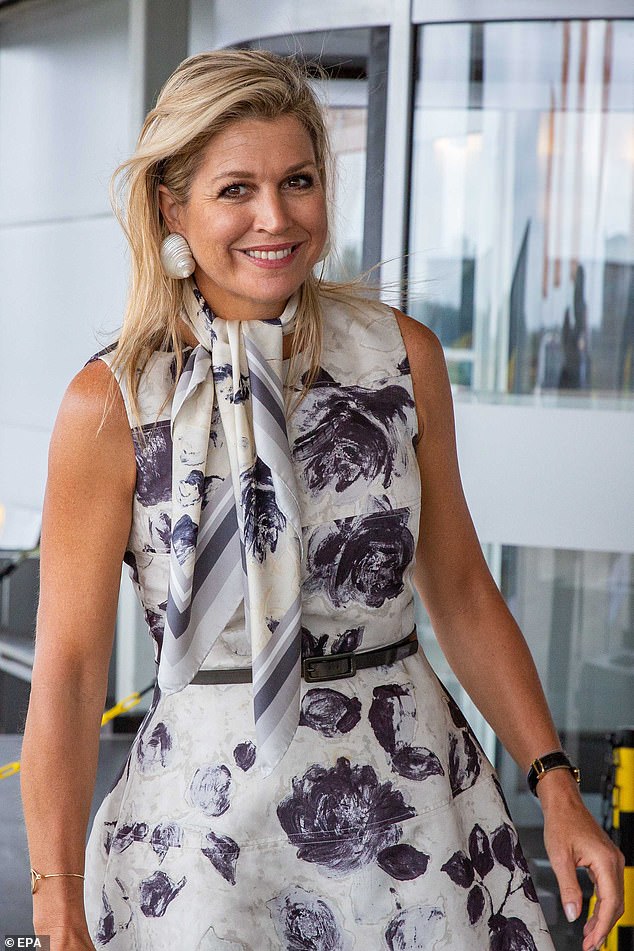 Maxima sported a dash of mascara, some eyeshadow and blush in order to add to her healthy complexion 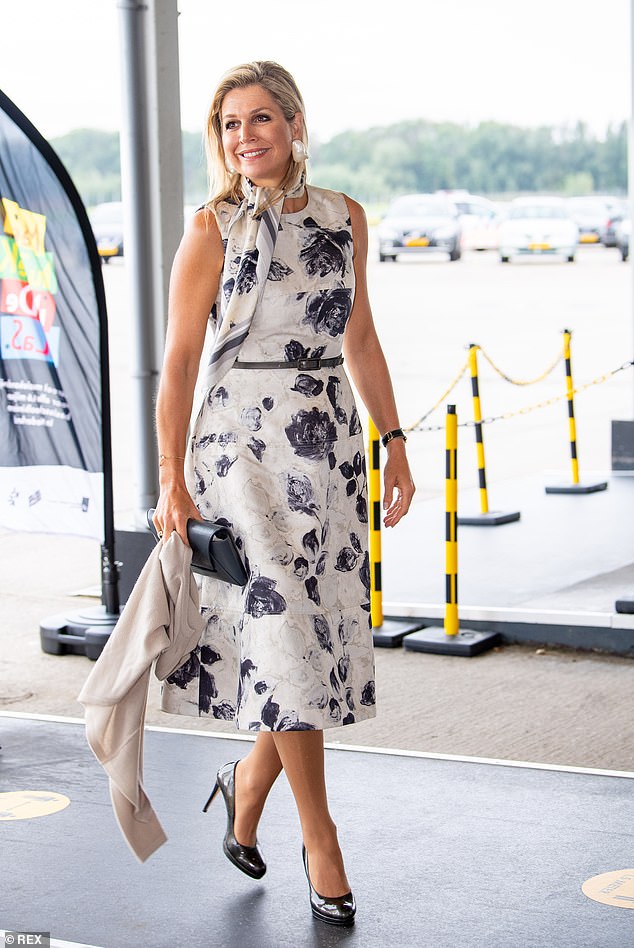 Queen of style! Maxima looked effortlessly chic when she arrived this morning, sporting the floral dress with black accessories