Queen Letizia of Spain put safety first with a mask as she headed to a school to mark the beginning of the new term.

The Spanish Queen, 47, headed to the Nuestra Señora del Patrocinio College in Milagro, Navarra to mark the start of the Spanish academic year.

Letizia’s own daughters Infanta Leonor, 14, and Sofia, 13, were forced to quarantine two days after heading back to school after a classmate tested positive to Covid-19.

Wearing a pair of stylish black culottes and a grey top, the Spanish royal toured the premises with school staff, who were also wearing masks. 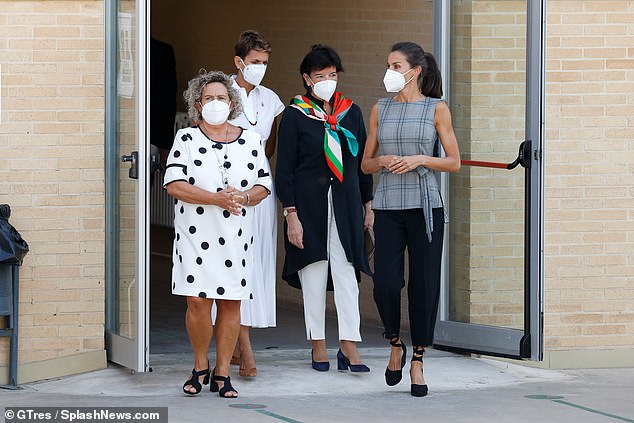 Queen Letizia of Spain put safety first with a mask as she headed to a school to mark the beginning of the school term. The Spanish Queen, 47, headed to the Nuestra Señora del Patrocinio College in Milagro, Navarra to mark the start of the Spanish academic year 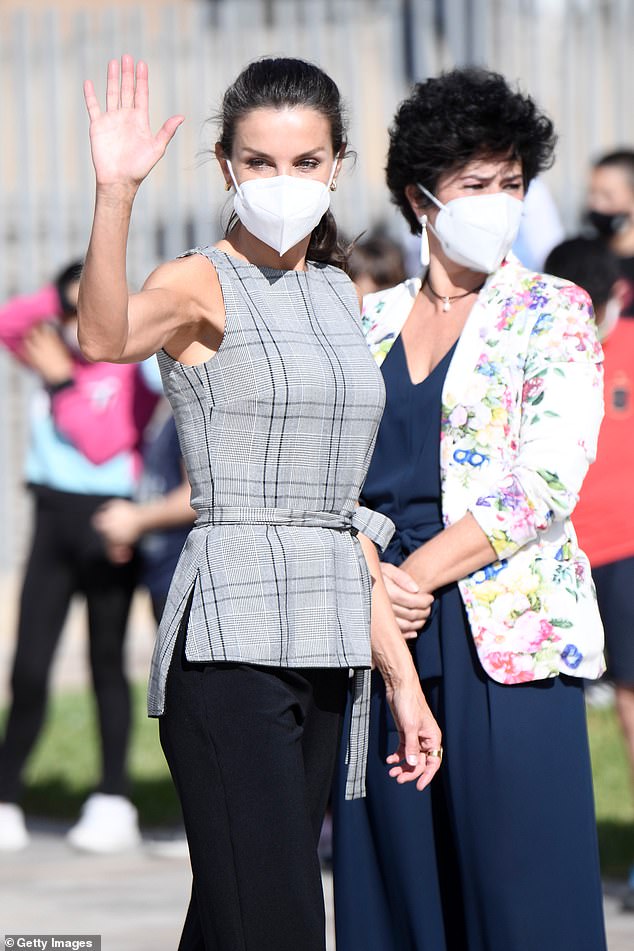 Letizia seemed relaxed at the event which comes a few days after her daughters Infants Leonor, 14 and Sofia, 13, were forced to quarantine after a classmate of Leonor tested positive to Coronavirus

For today’s engagement, Letizia picked a smart casual outfit with a pair of black culottes.

She recycled a £25 sleeveless grey top from Zara that revealed her toned arms and petite waist with a belt of the same fabric.

She accessorised with black platform heels tied at her ankles with a wide black bow.

The Queen kept it simple, and had styled her dark glossy locks in a sleek and ponytail. 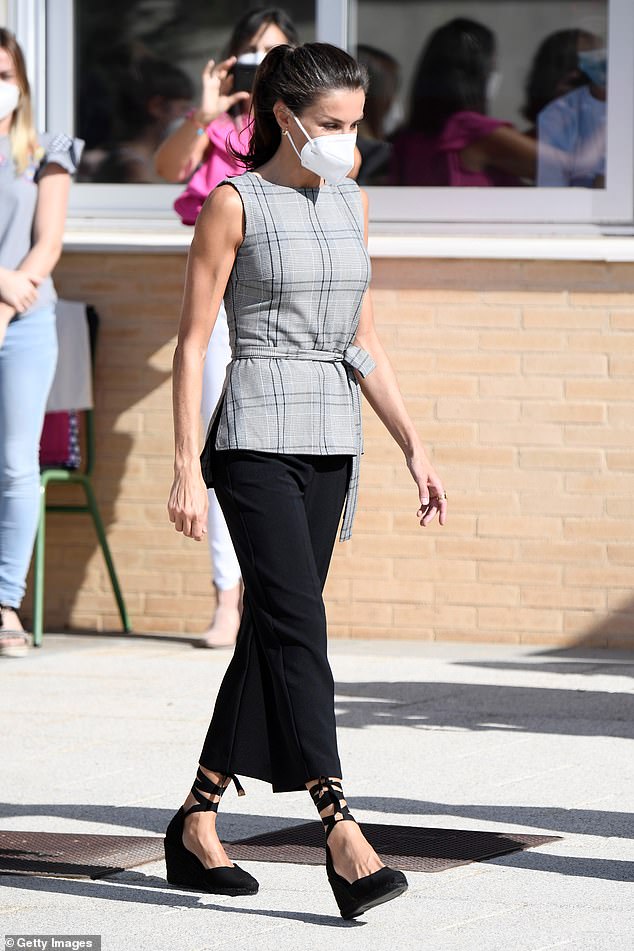 For today’s outfit, Letizia opted for black culottes with a recycled £25 top from Zara she first wore in 2018 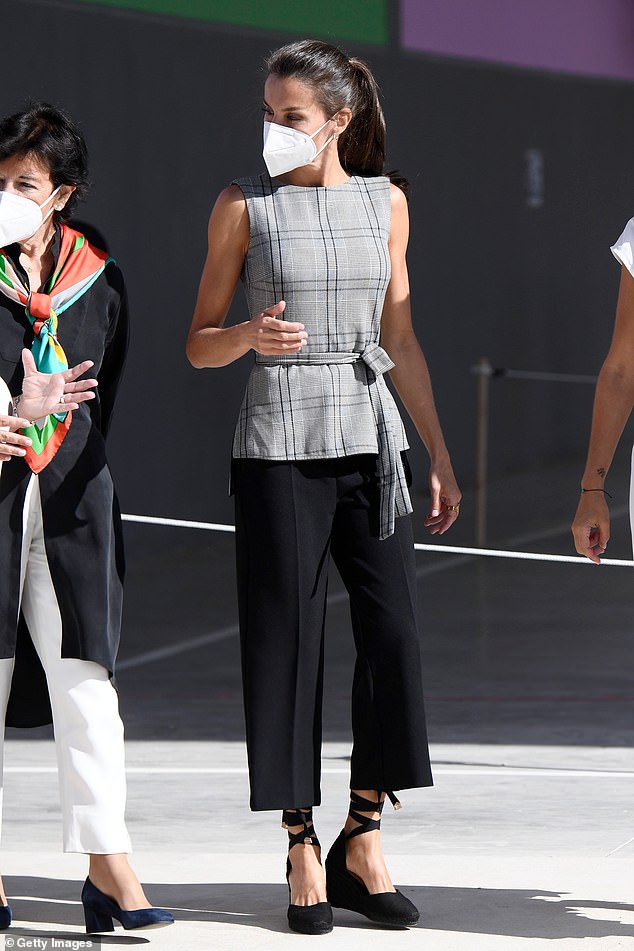 As she toured the school’s premises, Letizia kept her look simple and elegant, sporting no bag and little jewellery 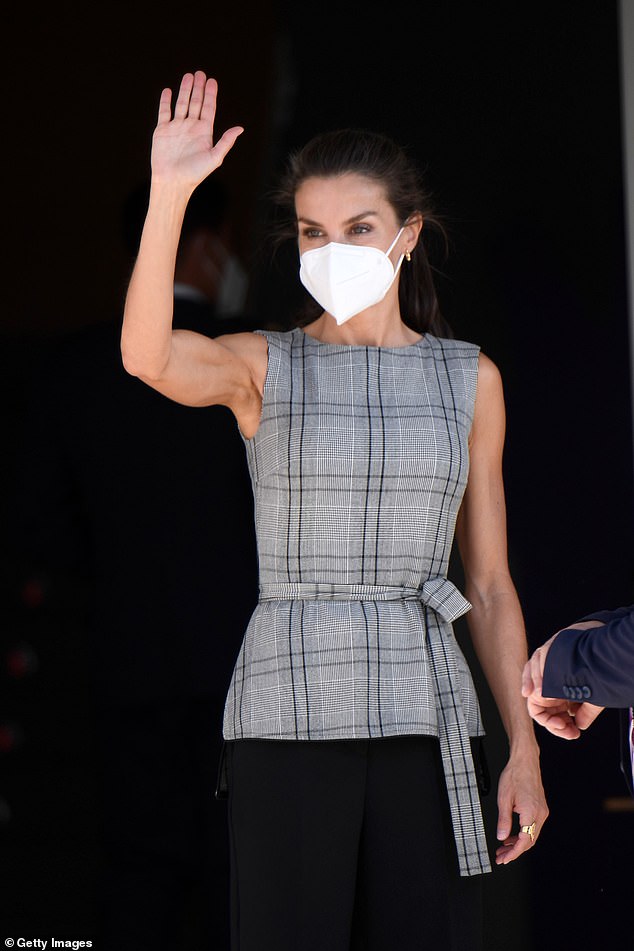 Wearing a protective mask, he royal waved to the students awaiting her visit at the school in Navarra

Only wearing a favourite ring with small golden hoop earrings, Letizia brought the focus to her beautiful hazelnut eyes with a dash of eyeliner and eyeshadow.

She looked relaxed and in high spirit during the event which saw her meet the school staff.

She later addressed the school’s student, who were all wearing masks.

The Spanish school term began last week on Wednesday 9 September and saw Letizia’s owner daughters return back to school after months of studying from home. 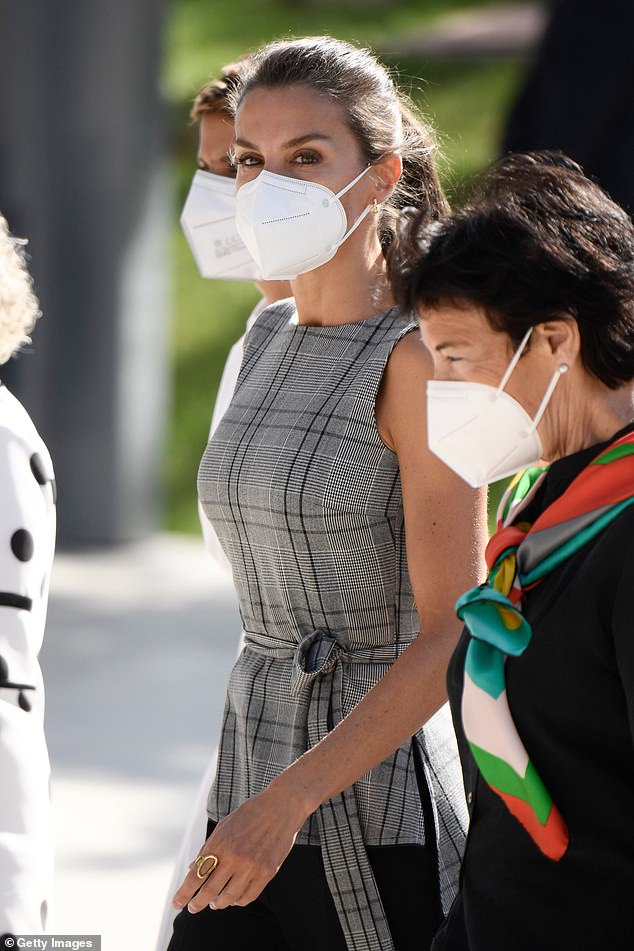 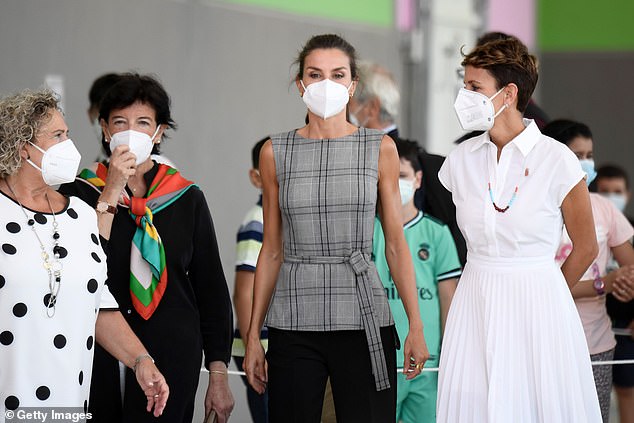 In spite of having her two daughters in quarantine, the Queen kept her cool during the engagement 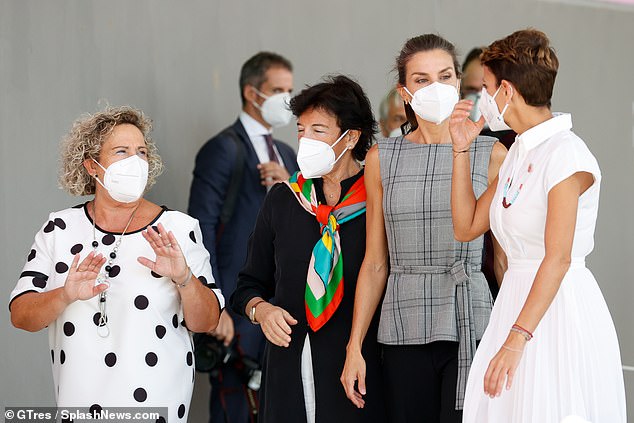 Letizia seemed in good spirit as the school staff walked with her around the school, talking about the upcoming school year

However, it was not long before a classmate in Princess Leonor’s year tested positive to the virus, sending the royal sisters into a two-week-long quarantine period.

It was said at the time that Leonor and Sofia would have to take coronavirus tests themselves.

This comes as Spain is experiencing a resurgence in covid-19 cases, having become the first country in Western Europe to register  500,000 infections, with a second surge in cases that coincided with schools reopening.

Princess Leonor arrived at school for the first day on Wednesday 9 and was dropped off by her father King Felipe. 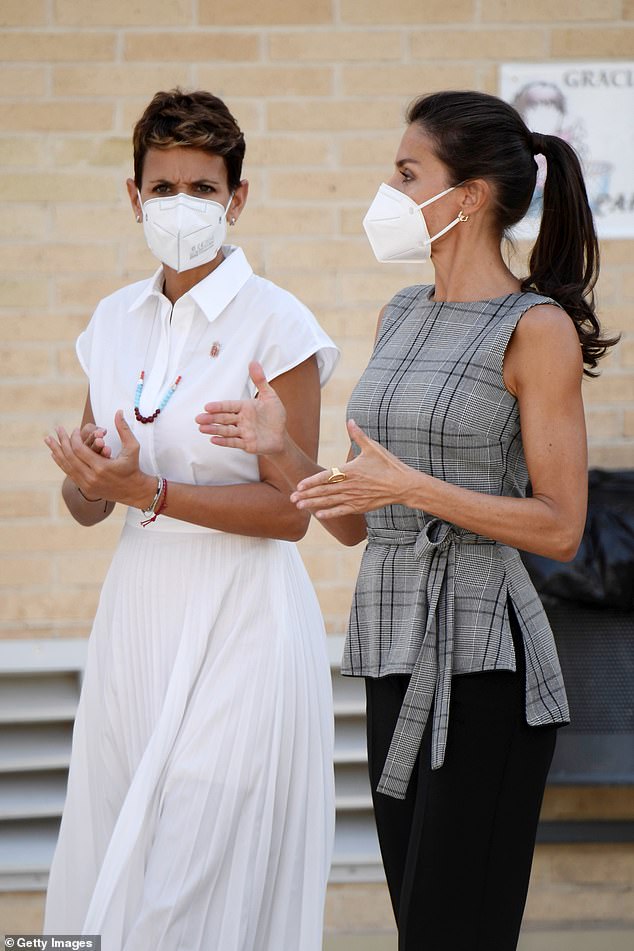 Letizia expertly put the focus on her toned arms and petite frame with the sleeveless Zara top, tied at the waist 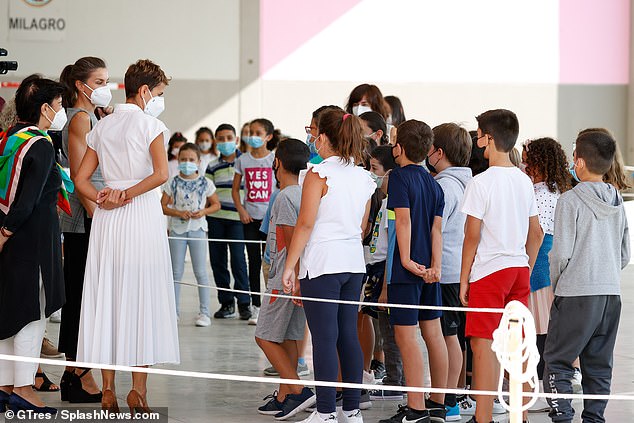 The Spanish Queen addressed the students who had been awaiting her visit in the Navarra school, today

Both appeared relaxed as they arrived, before Princess Leonor, who is heir to the throne, stepped out of the vehicle and was temperature checked by a member of staff.

It is believed that Princess Leonor started her fourth year of secondary education, while her younger sister Princess Sofia began her second year at the school.

It has been a challenging summer for the Spanish royal family, after runaway former King Juan Carlos caused shockwaves around the country in August by announcing he was leaving his homeland.

Princess Leonor has now been deemed by some as a saviour of the monarchy, with The Times writing: ‘Attention must turn to the future if the Bourbon monarchy is to survive.

‘It is a responsibility that rests of the shoulders of Leonor, and the reigning king, Felipe VI, knows that, as he introduces her to the country while trying to modernise the monarchy.’