Crown Princess Mary of Denmark proved her unflinching commitment to sustainable fashion by donning a striking look almost a year to the day since she first wore it.

Living up to her reputation for recycling outfits, the 48-year-old on Tuesday attended the Danish Industry Summit in Copenhagen dressed in the same $1,338 Max Mara one-piece and $970 Gianvito Rossi heels she chose for last year’s event.

The Princess previously stepped out in the look on September 17, 2019, when she joined husband Prince Frederik, 52, and their Swedish counterparts Crown Princess Victoria, 43, and Prince Daniel, 47, for the business summit in the Danish capital.

The grey check all-in-one, from Max Mara’s 2019 spring collection, is made from soft wool and swiftly sold out after Mary’s appearance. 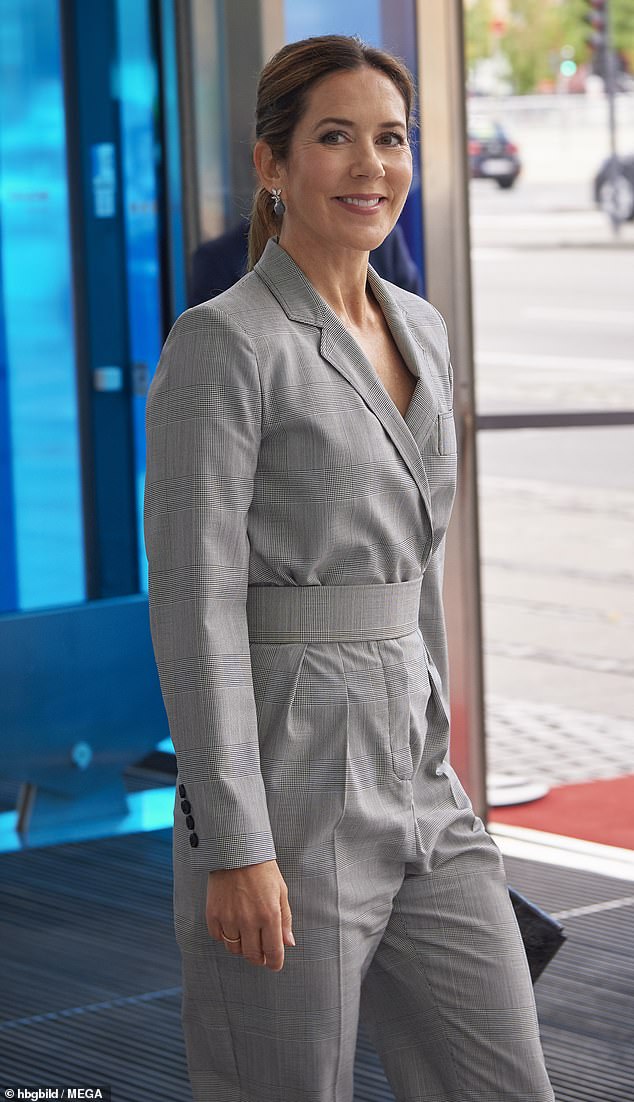 Recreating her original look, Denmark’s queen-in-waiting accessorised with a stack of Cartier and Dulong bracelets and carried a black bag from Danish label Carlend Copenhagen in a typical show of support for homegrown designers.

The consummate modern royal, Mary is known for mixing high fashion with budget-friendly pieces and championing locally made clothing whenever she can.

And the mother-of-four – who shares Prince Christian, 14, Princess Isabella, 13, and nine-year-old twins Prince Vincent and Princess Josephine with husband Frederik – has repeatedly proven she isn’t one to pass up a bargain.

Mary, who is poised to become the world’s first Australian-born queen, in June attended her first public engagement since the coronavirus crisis began in a cream blouse from Danish brand Elise Gug which was discounted to just $55.

She has worn the same burgundy gown from Danish designer Birgit Hallstein to host four New Year’s celebrations in the past 12 years – just one of the reasons for her longstanding reputation as one of Europe’s most down-to-earth royals. 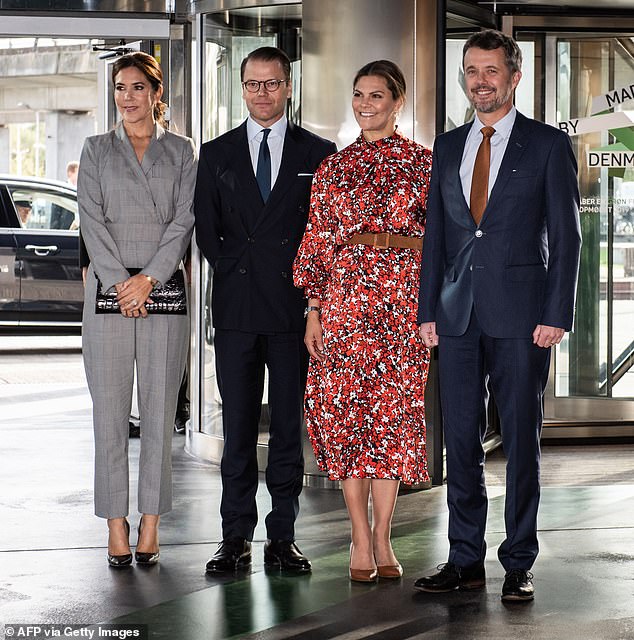 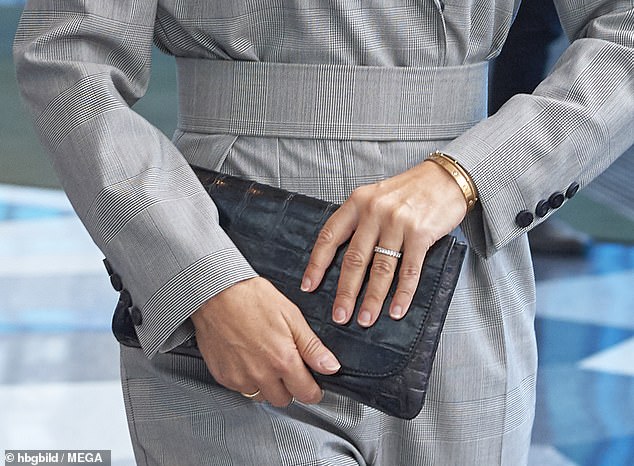 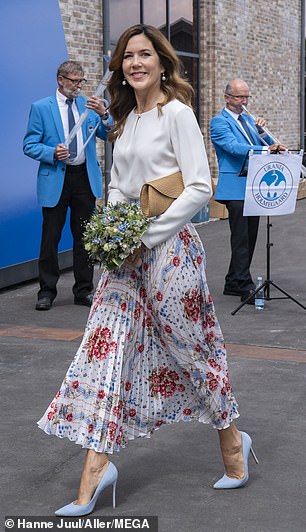 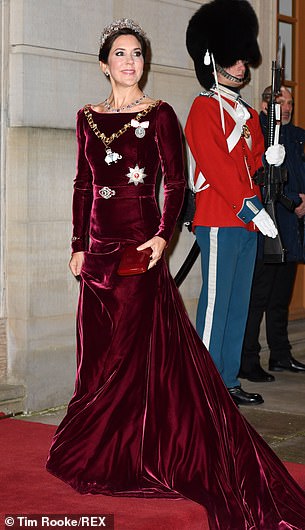 Mary wears a discounted $55 blouse from Elise Gug (left on June 8, 2020) and the Birgit Hallstein gown she has worn to four New Year’s celebrations in the past 12 years (right in 2019)

Comments on Facebook photos of Mary’s latest look reveal hundreds of adoring fans who view the Princess as a bona fide fashion icon.

‘You are such an elegant woman to have as our Crown Princess who represents the whole of Denmark. Great job, Your Highness,’ one Danish woman wrote.

A second said: ‘Stunning and beautiful as usual. Love that suit.’

‘So proud of Princess Mary, she is a beautiful lady inside and out,’ added a third, while a fourth said: ‘What a wonderful woman.’

Others described her as ‘sophisticated’, ‘natural’, ‘confident’ and ‘graceful’. 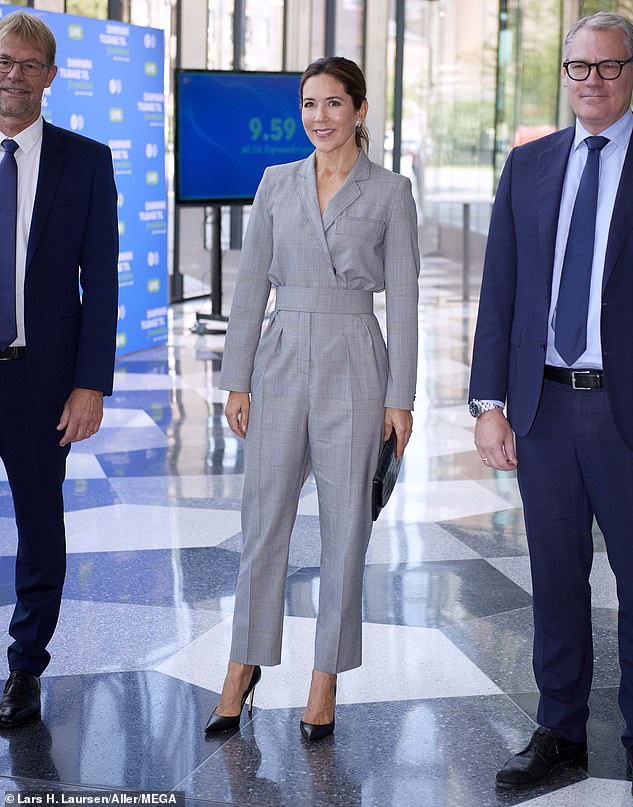 Comments on Facebook photos of Mary’s latest look (pictured on September 29, 2020) reveal hundreds of adoring fans who view the Princess as a bona fide fashion icon

Known for her impeccable dress sense, Denmark’s future queen has enjoyed a string of sartorial successes over the years and is known for re-wearing expensive pieces and restyling them with effortless flair.

So keen is Mary’s eye for fashion that a public vote twice named her the World’s Most Stylish Royal, ahead of the Duchess of Cambridge, Queen Letizia of Spain and Queen Rania of Jordan.

The late Chanel designer Karl Lagerfeld once described Mary and Kate Middleton as ‘royal sisters’ thanks to their strikingly similar appearance and comparable taste in clothes.

Denmark’s future queen has posed for Vogue Australia and German Vogue and is a patron of Global Fashion Agenda, which oversees the annual Copenhagen Fashion Summit.