Heir to the Spanish throne Princess Leonor and her sister Princess Sofia have gone into quarantine after a classmate at their school tested positive for COVID-19, the royal household said on Saturday.

Princess Leonor, 14, arrived for her first day of term at Madrid’s Santa Maria de los Rosales’ School  alongside her father King Felipe, 52, on Wednesday, before her sister Princess Sofia, 13, joined her on Friday.

However after a classmate in Princess Leonor’s year tested positive to the virus, the royal sisters will now have to isolate for 14 days and have to take coronavirus tests themselves.

It comes days after Spain became the first country in Western Europe to register 500,000 coronavirus infections, with a second surge in cases that coincided with schools reopening. 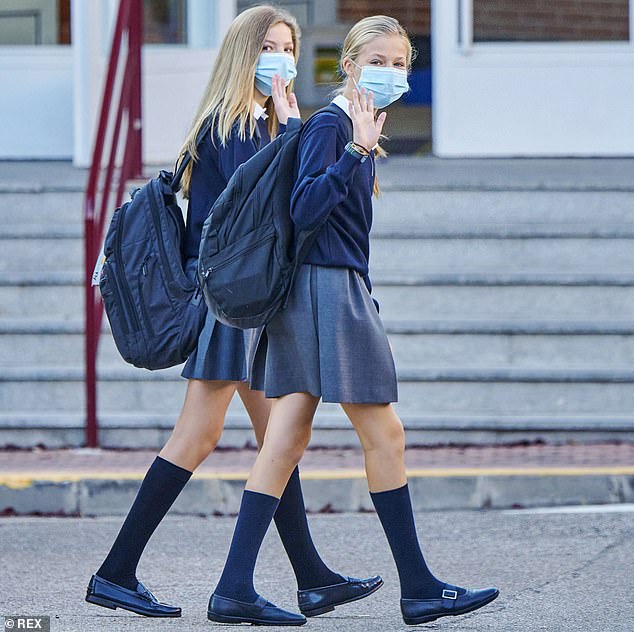 Heir to the Spanish throne Princess Leonor, 14, and her sister Princess Sofia, 13, have gone into quarantine after a classmate at their school tested positive for COVID-19 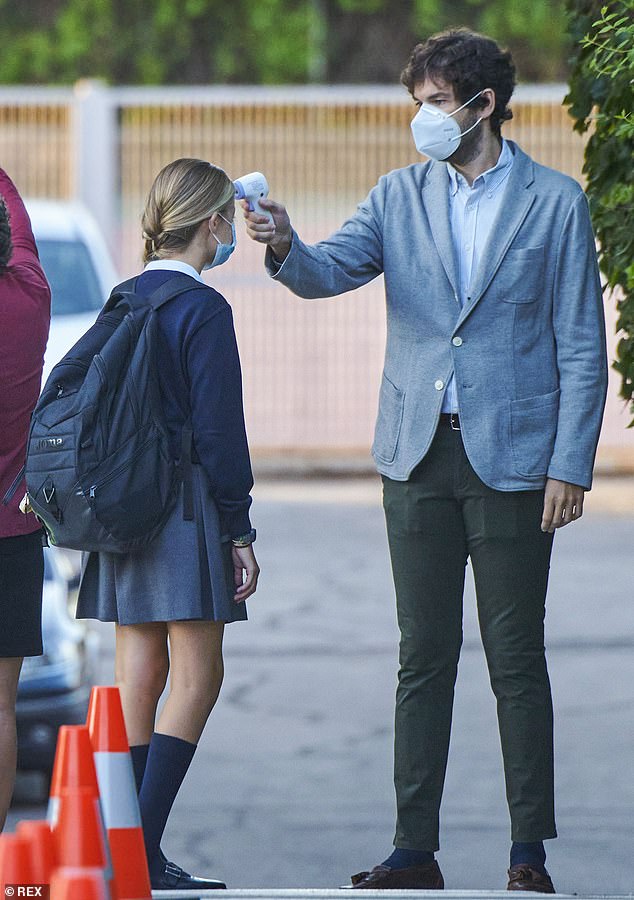 The heir to the throne, who returned to school for the first day of term on Wednesday, will now take a coronavirus test and isolate for two weeks

Despite their daughters quarantining at home, the king and Queen Letizia will continue their royal duties for the moment, a spokesman for the royal household said.

Princess Leonor arrived at school for the first day on Wednesday and was dropped off by her father King Felipe.

Both appeared relaxed as they arrived, before Princess Leonor, who is heir to the throne, stepped out of the vehicle and was temperature checked by a member of staff.

She went on to accompany her younger sister for her first day on Friday this week. 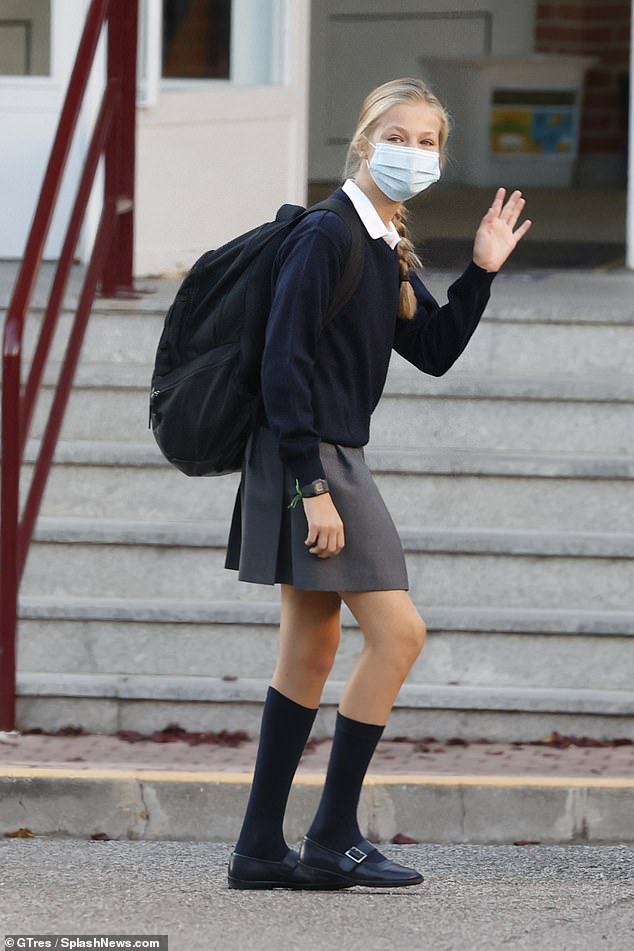 It is believed that Princess Leonor started her fourth year of secondary education, while her younger sister Princess Sofia began her second year at the school.

It has been a challenging summer for the Spanish royal family, after runaway former King Juan Carlos caused shockwaves around the country in August by announcing he was leaving his homeland.

Princess Leonor has now been deemed by some as a saviour of the monarchy, with  The Times writing: ‘Attention must turn to the future if the Bourbon monarchy is to survive.

‘It is a responsibility that rests of the shoulders of Leonor, and the reigning king, Felipe VI, knows that, as he introduces her to the country while trying to modernise the monarchy.’ 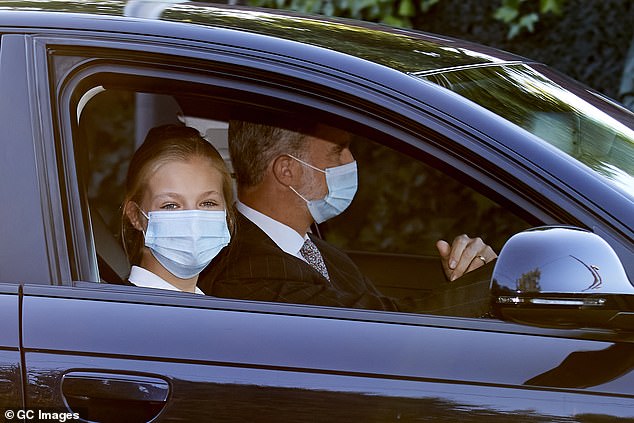 King Felipe, 52, accompanied his eldest daughter, who is heir to the throne, on the school run on Wednesday last week

The publication went on to say the young princesses are ‘the future for a modernised monarchy.’

‘Leonor is still very young, but modern, well-educated and a woman — which is important as the feminist movement grows in Spain,’ a palace source reportedly said. ‘She is a great asset.’

Leonor made her public-speaking debut at at awards ceremony in Barcelona last November, where she gave comments in Spanish, Catalan, English and Arabic.

Meanwhile, she and Sofía read from Don Quixote on World Book Day in April, and addressed the nation in a video amid the coronaviurs pandemic. 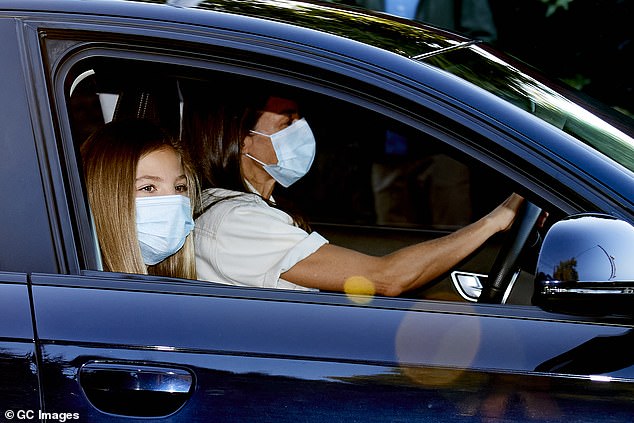 Meanwhile Queen Letizia drove Princess Leonor, 13, to school for her first day of term on Friday

Spain continues to struggle to control a recent spike in infections amid schools reopening across the country.

Recent infections have been more common among younger people who often develop no symptoms thanks to their stronger immune systems, and the death rate remains far below the March-April peak when daily fatalities routinely exceeded 800.

Despite the unwanted milestone, unlike then, hospitals have enough beds to treat Covid-19 patients. 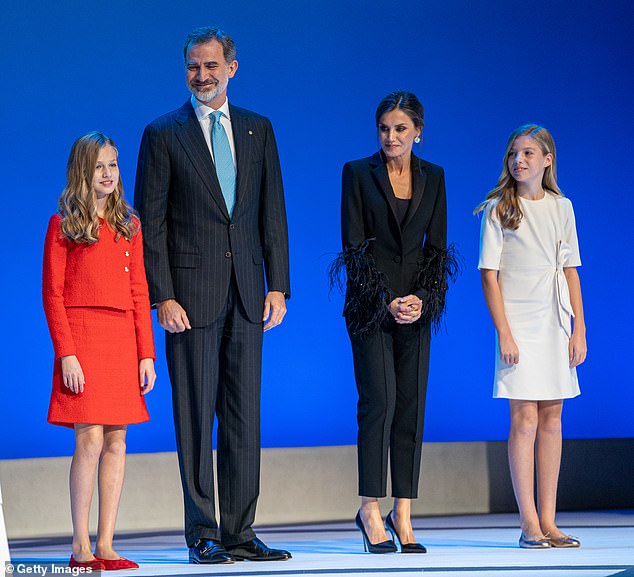 Despite their daughters quarantining for 14 days, King Felipe and Queen Letizia will continue to perform royal duties (pictured, together in November 2019)

After a first wave in spring that ravaged Spain’s elderly population and overwhelmed the hospital system, authorities brought the outbreak under control with the help of one of the world’s toughest lockdowns.

But as restrictions on movement were lifted and mass testing began in late June, infections rose from a few hundred a day to a new peak of over 10,000 around 10 days ago, outstripping other hard-hit nations such as France, Britain and Italy.

The overall mortality rate since the pandemic first struck is around 6% in Spain, lower than in Italy, Britain and France.