Princess Charlene, 42, donned a red wetsuit as she kicked off The Crossing Calvi Monaco Water Bike Challenge earlier this afternoon.

The challenge, which sees two teams of four internationally renowned athletes take turns to ‘cycle’ 180km from Calvi, in Corsica, to Monaco.  was launched by the royal to raise awareness and funds for her foundation’s activities.

Meanwhile her husband Prince Albert, 62, and children Princess Gabriella and Prince Jacques cheered on from the sidelines . 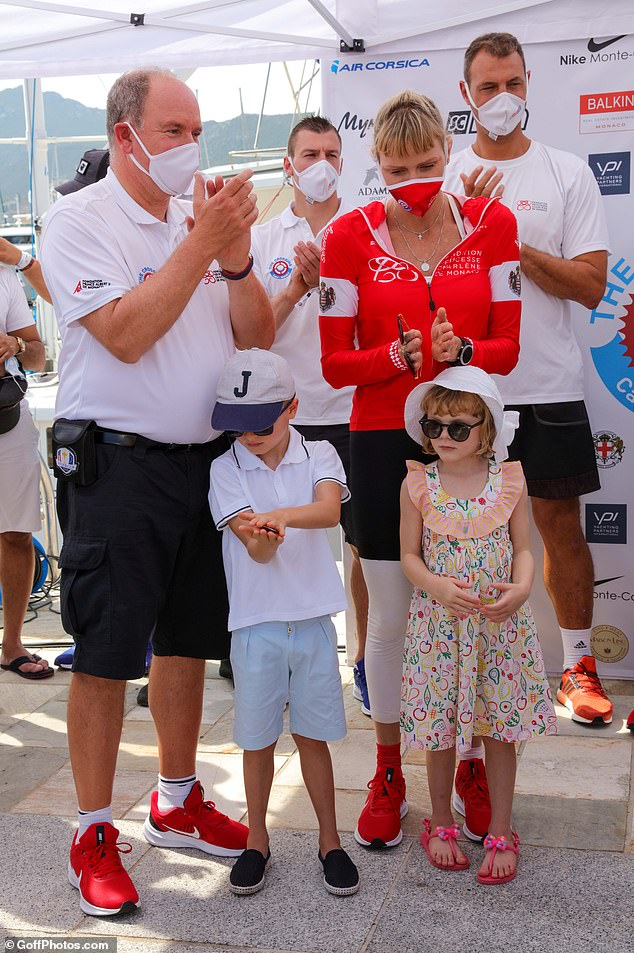 Princess Gabriella and Prince Jacques of Monaco, both five, joined Prince Albert, 62, to cheer on their mother Princess Charlene, 42, as she launched a gruellng charity water bike challenge today. 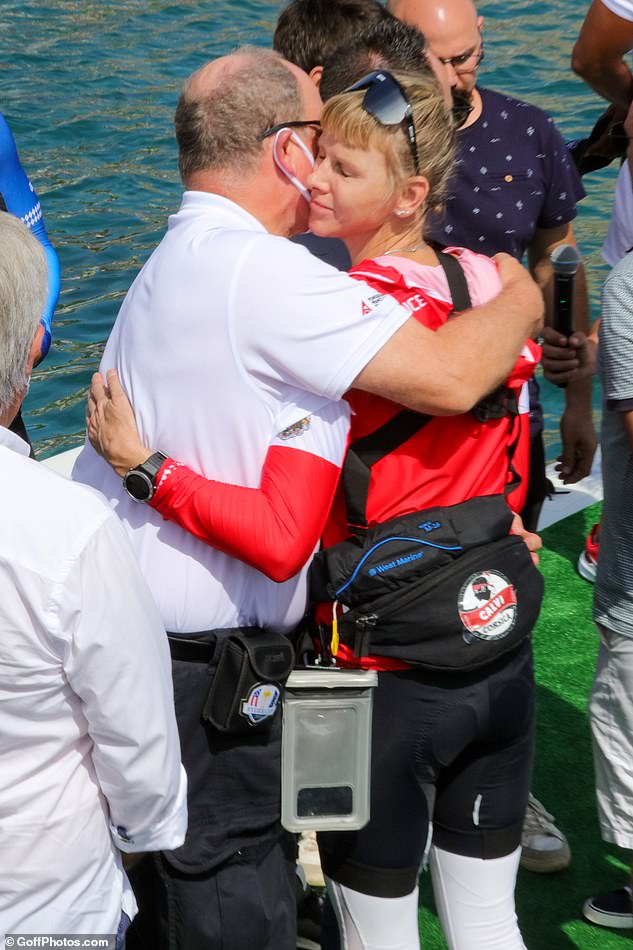 The royal couple could be seen enjoying a quiet embrace ahead of the 180km race launch, which took place this afternoon

Prince Albert donned a facemask as he joined his wife alongside their young children to pose for snaps ahead of the challenge.

Later, the family hopped into a boat to watch on as Princess Charlene began her grueling 24 hour challenge.

The event will benefit the Princess Charlene of Monaco Foundation and raise awareness of its programmes including ‘Learn to Swim’ and ‘Water Safety’, which have been implemented around the world. 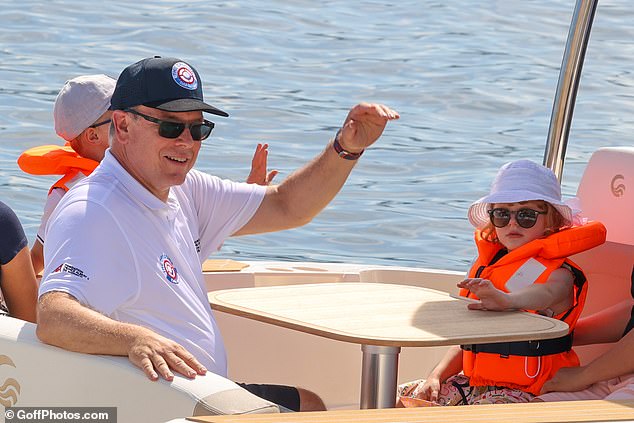 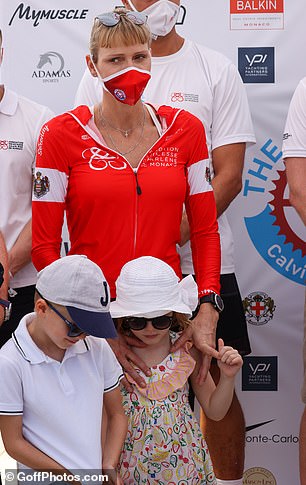 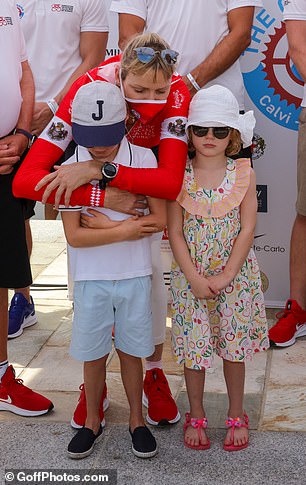 Princess Charlene donned a red face mask and matching suit as she prepared for the 24 hour challenge earlier today, while her five-year-old twins watched on 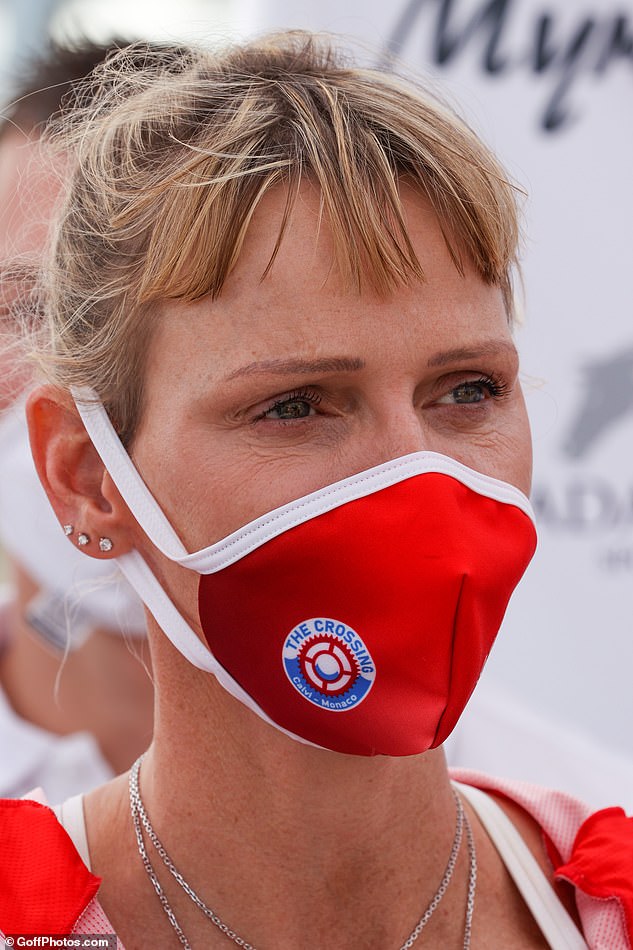 The Princess of Monaco represented South Africa at the 2000 Sydney Olympics and later retired from professional swimming in 2007.

Charlene and Albert tied the knot in 2011 after five years together, going public with their relationship at the 2006 Winter Olympics in Turin. 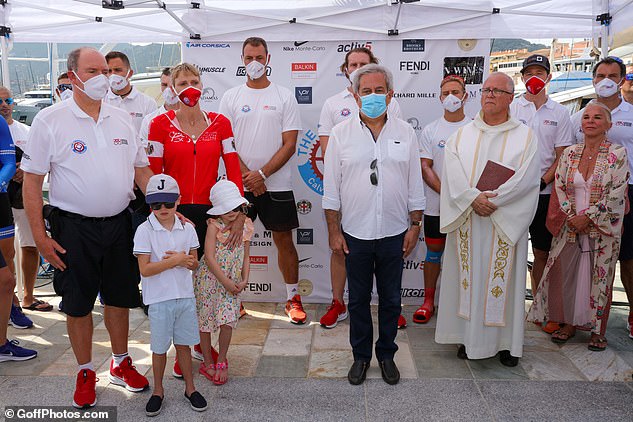 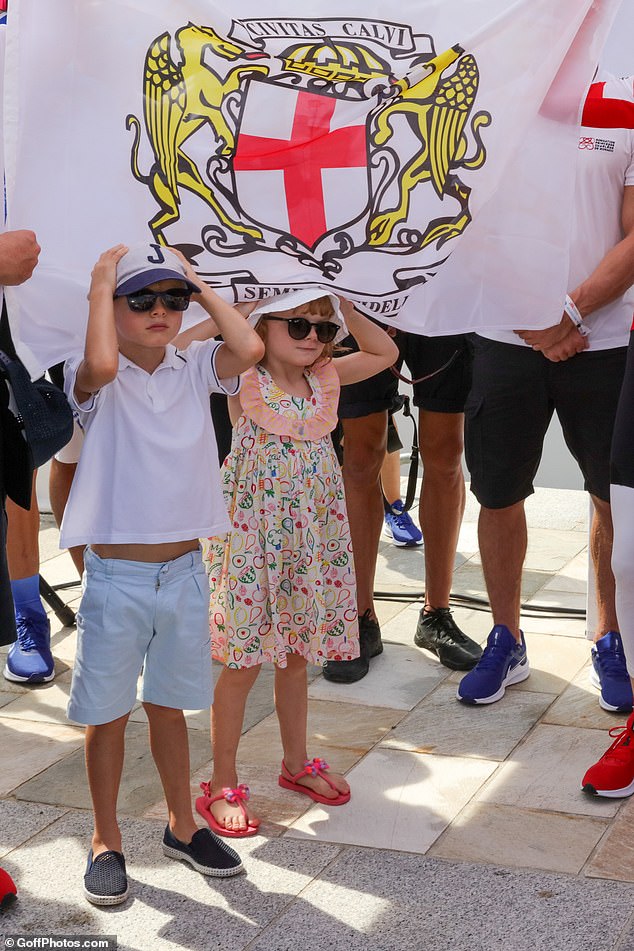 Prince Albert is the son of Princess Grace and Prince Rainier III of Monaco.

In early March, Prince Albert became the first head of state to test positive for COVID-19.

He was monitored by his personal doctor and by specialists at the Princess Grace Hospital Centre, which is named after his mother Grace Kelly.

He told PEOPLE at the time that he experienced mild flu-like symptoms, saying: ‘I’ve a slight fever, not really that bad. A little bit of a cough. I’d a runny nose the first few days, that was the first sign. I’ve felt a little stuffed up but that’s it,’ he said.

The mother-of-two and their twins, Jacques and Gabriella, lived separately to Albert while he was in isolation. 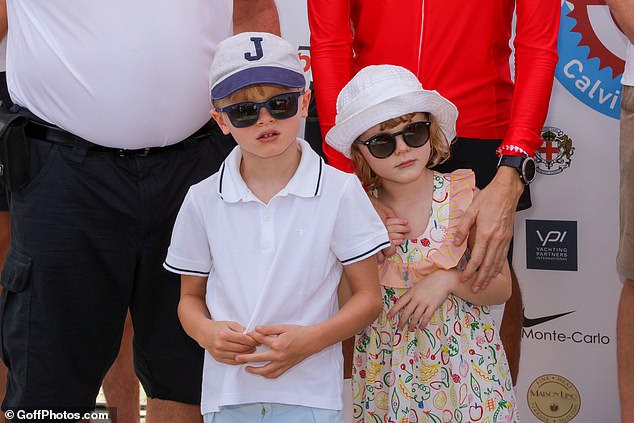 Speaking on how the family kept in touch, Albert told People magazine: ‘We FaceTimed — usually in the evenings. We told stories and talked about what we did during the day.

I told [the twins] to be safe. They knew I was sick and that I had to stay away. I’m hoping I get a ‘Welcome Home’ banner.’

After he spent several weeks self-isolating in the palace, the royal returned to his family.