Princess Anne wrapped up warm to protect herself from the cool August weather today as she joined her husband Sir Timothy Laurence and their English bull terrier for a drive near Balmoral Castle today.

The Princess Royal, 70, donned sunglasses, a fluffy hat and coat as she sat in the driver’s seat of her Landrover discovery to travel to a grouse shoot ten miles from the Queen’s, 94, summer residence.

Her husband Tim, 65,  a retired Royal Navy officer and former equerry to the Queen, sported a Barbour coat, fleece and checked shirt as he travelled in the passenger seat, with the couple’s beloved dog perched between the pair.

Anne is currently visiting the Queen, 94, at Balmoral, where the royal is staying throughout August before returning to Windsor Castle in the autumn. 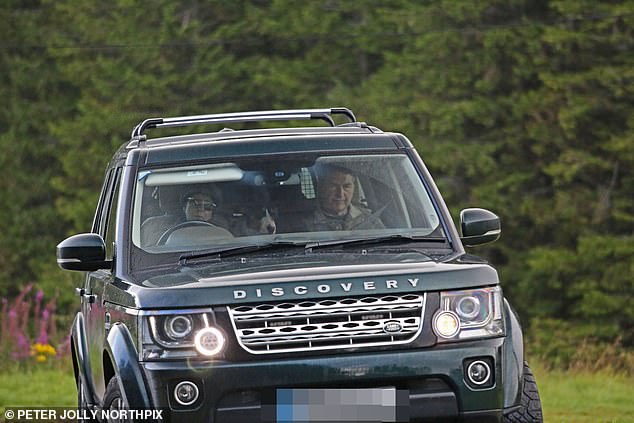 The Princess Royal, 70, donned sunglasses, a fluffy hat and coat as she sat in the driver’s seat of her Landrover discovery to travel to a grouse shoot ten miles from her mother’s summer residence

Anne’s son-in-law Mike Tindall recently revealed Covid-19 and the recent spike of cases in Aberdeen meant plans to mark the big day in Scotland have been scaled back.

The Queen travelled up to the 50,000 acre estate at the start of August and will be joined by family members throughout their stay, which is will last until October.

However this year many visitors, who typically include the Duke and Duchess of Cambridge, Prince Charles and the Duchess of Cornwall and Prince Edward and the Countess of Wessex, will likely maintain social distancing while on site. 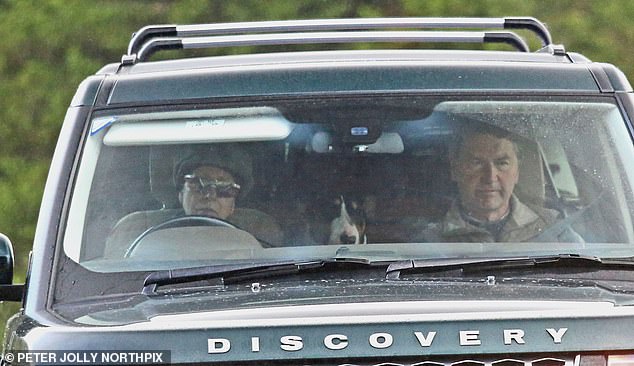 Family members will not stay in the castle with the Queen and Duke of Edinburgh as they have done in previous years and will instead be housed in other properties in the grounds of the estate.

They will be able to meet her for outside activities instead including walks, horse riding and picnics.

Princess Anne’s visit comes as it was reported Prince William and Kate Middleton had travelled up to the estate recently with their children.

According to reports, the Queen has finally reunited with William, Kate and their three children for the first since the country was plunged in coronavirus lockdown this weekend 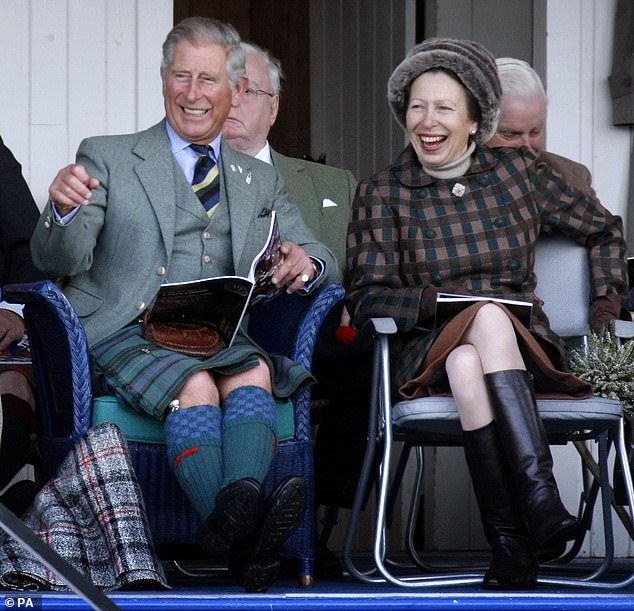 Anne’s son-in-law Mike Tindall recently revealed Covid-19 and the recent spike of cases in Aberdeen meant plans to mark the big day in Scotland have been scaled back (pictured, the royal with Prince Charles)

Almost exactly five months after the Queen told Britons ‘We will meet again’ in a now historic address to the nation, she had her first socially distanced meeting with all five of the Cambridges.

It was the first face-to-face meeting involving the Duke and Duchess of Cambridge, Prince George, Princess Charlotte and Prince Louis since lockdown began in March, reports The Sun.

According to the Sun, sources say the Queen spent time with her great-grandchildren while outside on the royal estate.

Prince Edward and Sophie of Wessex were also reportedly at the 50,000-acre estate this weekend. 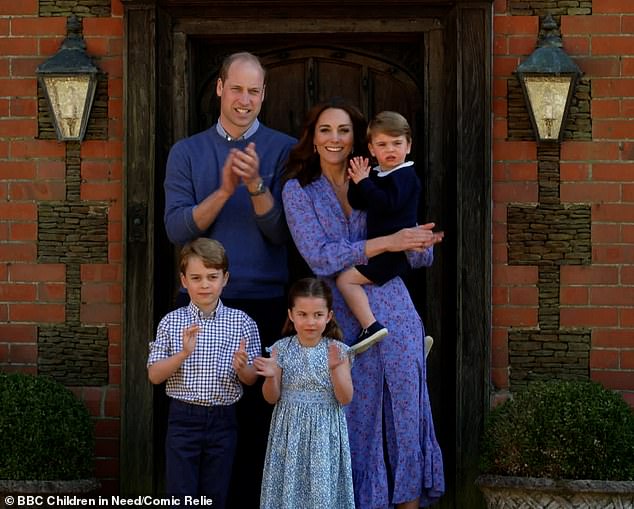 It comes after reports emerged that the Queen had held her first face-to-face meeting involving the Duke and Duchess of Cambridge, Prince George, Princess Charlotte and Prince Louis since lockdown began in March

The source told The Sun: ‘Like every family, they’ve been desperate to get back together and over the moon it was possible this weekend.

‘They’ve all been up there for a few days and although there are very strict procedures with social distancing, they’ve been able to find ways of seeing each other outside.

Previous reports suggested Balmoral staff have been banned from social activity and the annual Ghillies Ball has also been cancelled due to coronavirus.

An insider told the Mail on Sunday ‘stir-crazy’ aides are staying in the New Block, a dull granite building with a dozen bedrooms outside near the castle.

The insider said: ‘Without all the normal facilities which make a stay pleasant for staff, everyone’s saying it’s like being in Colditz, the prisoner of war camp. 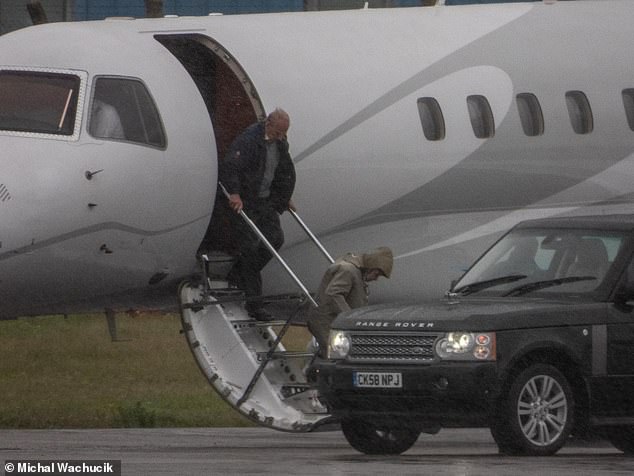 The Queen and the Duke of Edinburgh arrived in Scotland for the start of their summer holiday. The couple travelled by private jet from RAF Northolt, in west London, to Aberdeen airport where they were met by driver, pictured

The Queen and the Duke of Edinburgh, 99, have been in Scotland since August 4.

The couple, who were previously isolating at Windsor Castle, travelled by car to RAF Northolt, in west London, where they boarded a private jet to Aberdeen airport, where they were met by a driver and whisked off to Balmoral, roughly an hour away.

The couple had been isolating at Windsor Castle with a reduced household since March 19.

Although she has been unable to carry out many engagements in person, the Queen remained active in her royal duties, taking part in video call meetings and conducting her weekly audience with the Prime Minister via telephone.