The Duke of Cambridge, 37, who is President of the Football Association, is understood to have attended the meeting at the Hyatt Regency Churchill to give a half-hour presentation.

It is expected that the Premier League will announce later today a partnership between the top-flight clubs and the campaign, which already has the backing of the FA. 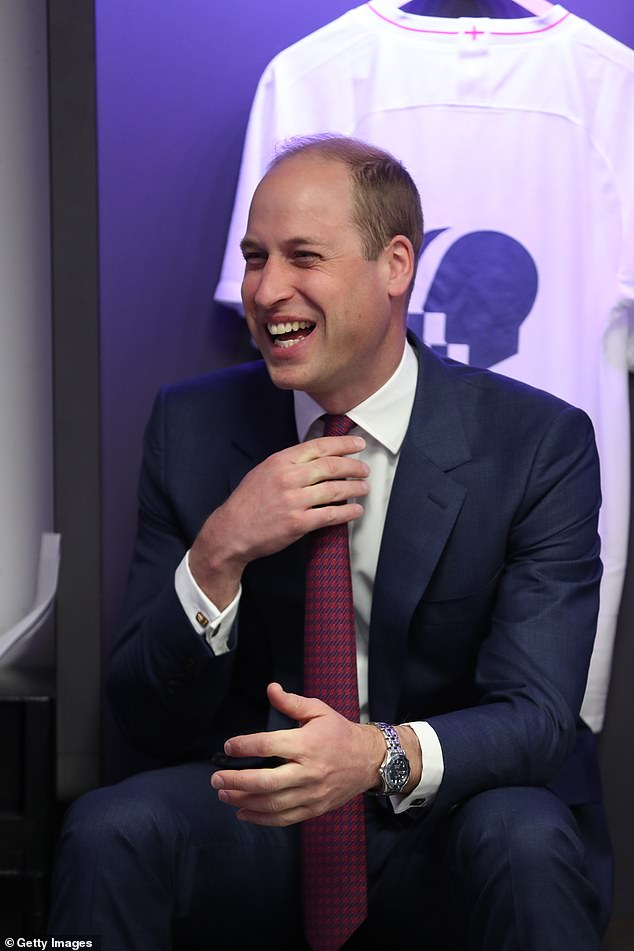 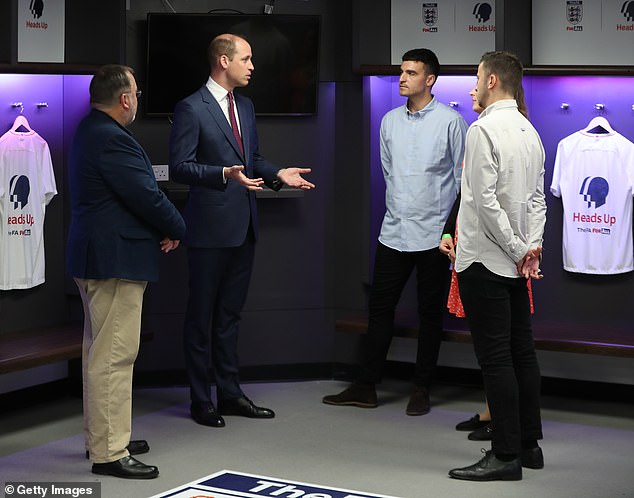 The Duke of Cambridge, 37, who is president of the Football Association (FA) looked smart as he met grassroots football players, coaches and fans from clubs across the country at Wembley Stadium

In May, Prince William launched Heads Up – which is a legacy of the Royals’ charity Heads Together – at Wembley.

He said at the time: ‘We all need to take care of our everyday mental fitness, and provide support to one another when we face setbacks, so we can be match fit for whatever lies ahead.’

The season-long campaign will harness the power of football to encourage more people – particularly men – to feel comfortable talking about their mental health, and feel able to support their friends and families through difficult times. 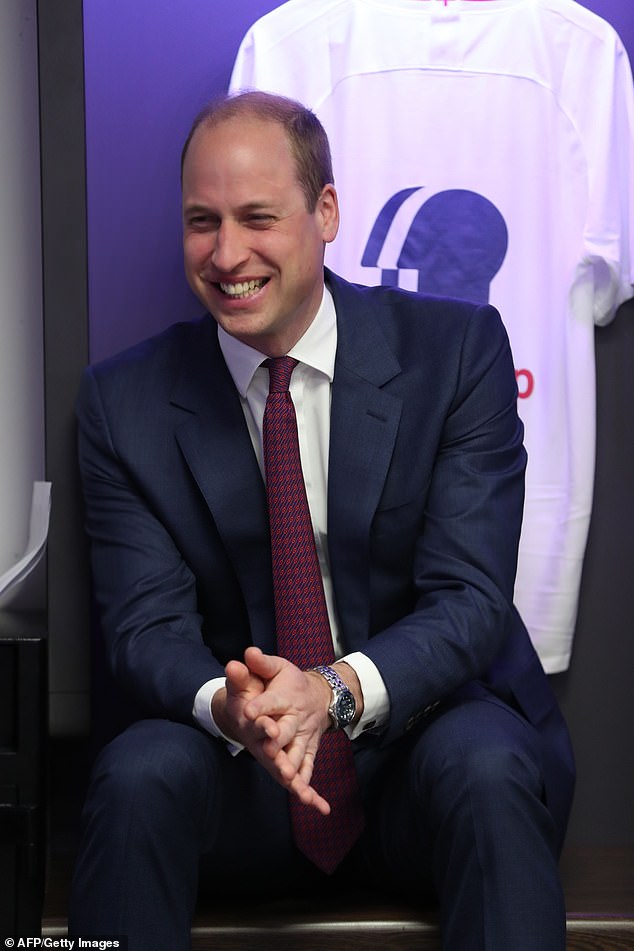 Heads Together and The Football Association announced the new campaign – Heads Up – today, to generate the biggest ever conversation around mental health – with William at the helm 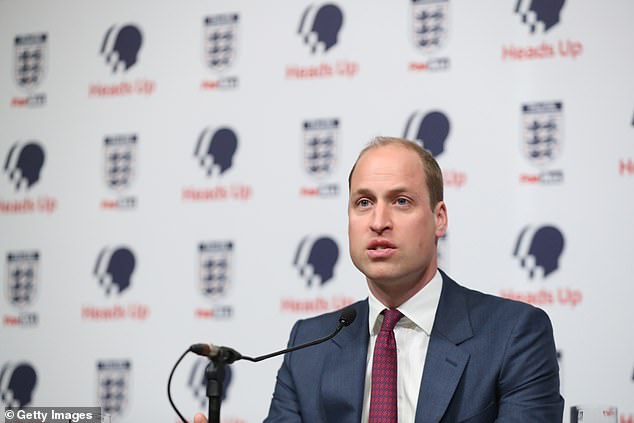 During a conversation with coaches he highlighted how abuse might be a difficult issue for players to discuss and that racism needed to be tackled.

He said: ‘People are now talking a little bit about mental health issues but I imagine talking about racism is still quite a difficult subject, especially when it’s happening in such a public fashion with Premier League matches or Champions League.’ 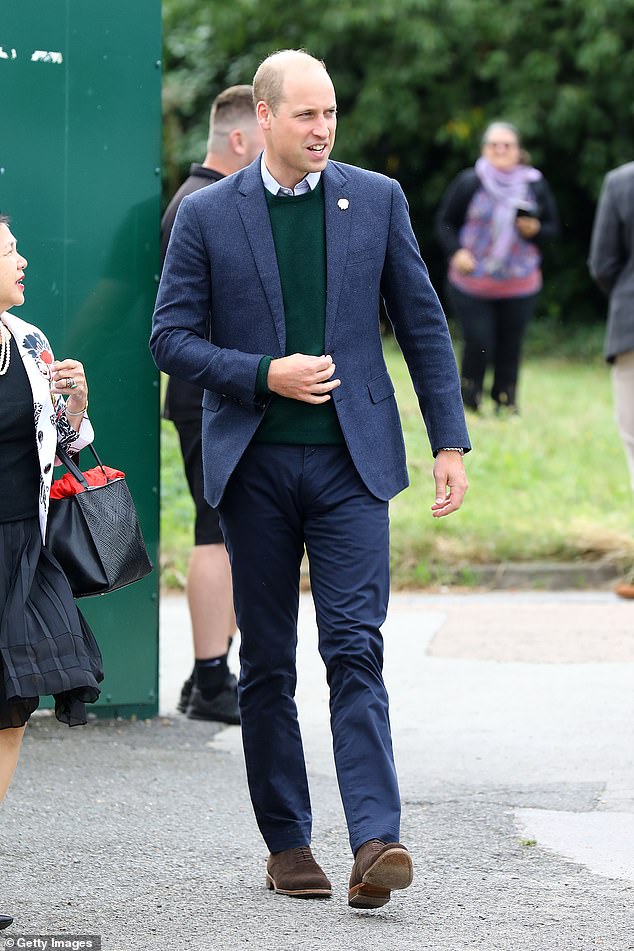 The Duke of Cambridge highlighted the importance of tackling racism in football, during a visit to a north London football club last month 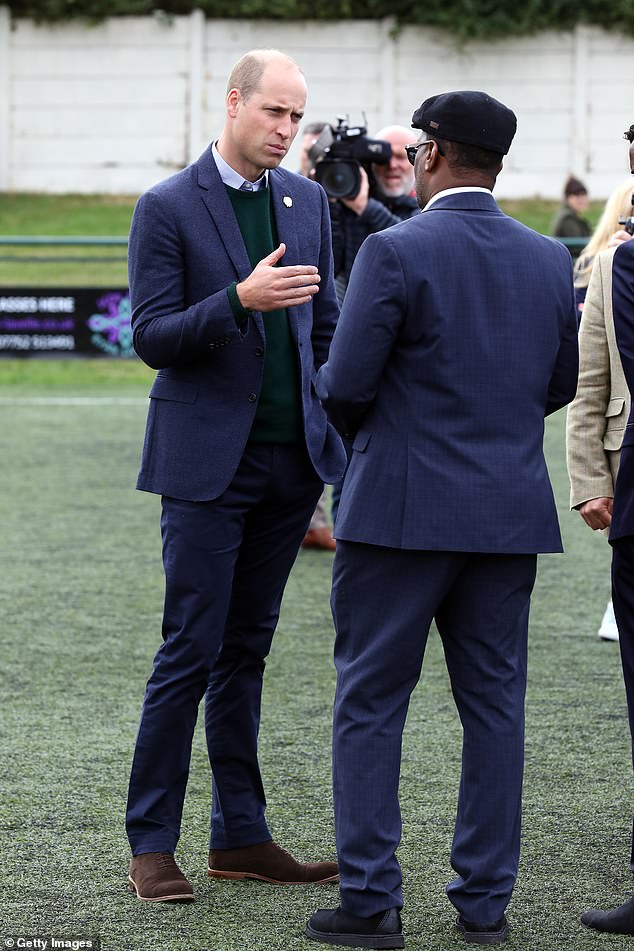 Prince William (pictured) also discussed the new guidelines with the club’s coaches, and how it can support them in identifying the signs of mental health issues

The royal is a longtime advocate of mental health awareness and in May, he and wife Kate Middleton, 37, launched Shout, with the help of Prince Harry and Meghan Markle.

Yesterday, the Cambridges delighted fans by naming the Sussexes in an Instagram post celebrating the work of Shout – a 24/7 crisis text service.

Shortly afterwards, Harry and Meghan returned the favour by naming the Duke and Duchess of Cambridge in their post about the event, alongside photos of the couple yesterday.

Shout is tied to the royal Heads Together programme and was founded thanks to a grant from the Royal Foundation.

In June it was announced the Duke and Duchess of Sussex would split from the Royal Foundation to launch their own charitable foundation. 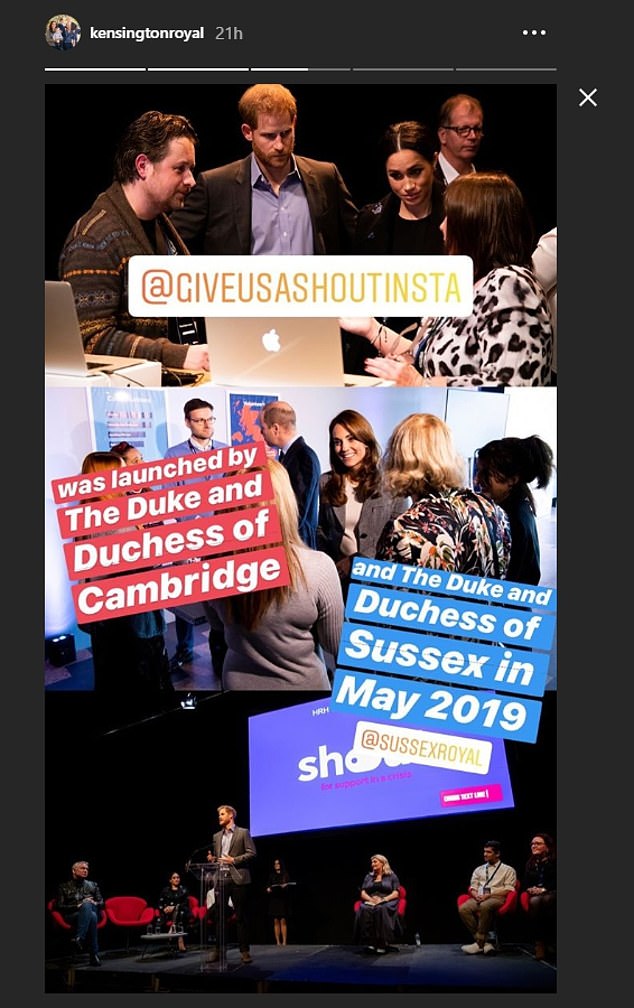 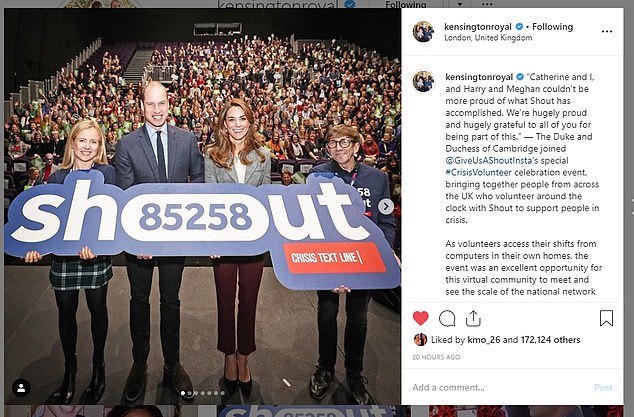 Prince William seemed keen to convey a message of unity when speaking at an event for Shout yesterday (pictured). Addressing the auditorium at the Troubadour White City Theatre, he said: ‘Catherine and I, and Harry and Meghan couldn’t be more proud

The couple will continue to be involved in Heads Together and its legacy initiatives, including Shout.

Prince William seemed keen to convey a message of unity when speaking at an event for Shout yesterday.

Addressing the auditorium at the Troubadour White City Theatre, he said: ‘Catherine and I, and Harry and Meghan couldn’t be more proud of what Shout has accomplished. We’re hugely proud and hugely grateful to all of you for being part of this.’

To reiterate the point, the quote was used at the start of the Kensington Palace Instagram post about the event and was re-posted again in an Instagram Story.