Prince Harry was spotted volunteering for a non-profit foundation providing COVID-19 support for veterans and their families, and at-risk communities in Compton, California, last week.

The Duke of Sussex, 36, joined volunteers to pack and distribute food parcels as part of an event organised by Compton Veterans of Foreign Wars and the Walker Family Events Foundation (WFEF).

Taking to Instagram, WFEF shared a photograph of the Duke of Sussex casually dressed in a pair of blue jeans, a khaki colored polo shirt, cap and protective face mask.

The event took place just a short drive from where Meghan Markle grew up and where her mother Doria lives in the View Park-Windsor Hills area of Los Angeles, approximately 20 minutes away, in a large yellow-colored detached home. It neighbors Crenshaw, an area that has been scarred by gang violence.

Alongside the image, the foundation penned: ‘Today I had the honor of meeting and working alongside Prince Harry, Duke of Sussex. He joined us in volunteering at Compton VFW for the Operation Nourish program packing and distributing food to our #Compton neighbors. He is very humble and kind.’

It’s the latest in a series of engagements focusing on the US military and veterans for Prince Harry, after his wreath was ‘snubbed’ by royals on Remembrance Sunday.

The Duke of Sussex, who spent ten years in the armed forces, made the personal request to Buckingham Palace for a wreath to be laid at the Cenotaph on his behalf, but was refused due to the fact he had left royal duties in March, The Times reported.

The Queen was not thought to have been informed of the request or its refusal, which is said to have ‘deeply saddened’ the Duke of Sussex, the publication reported.

Prince Harry, 36, volunteered for a non-profit foundation providing COVID-19 response for veterans and their families, and at-risk communities in Compton last week (pictured) 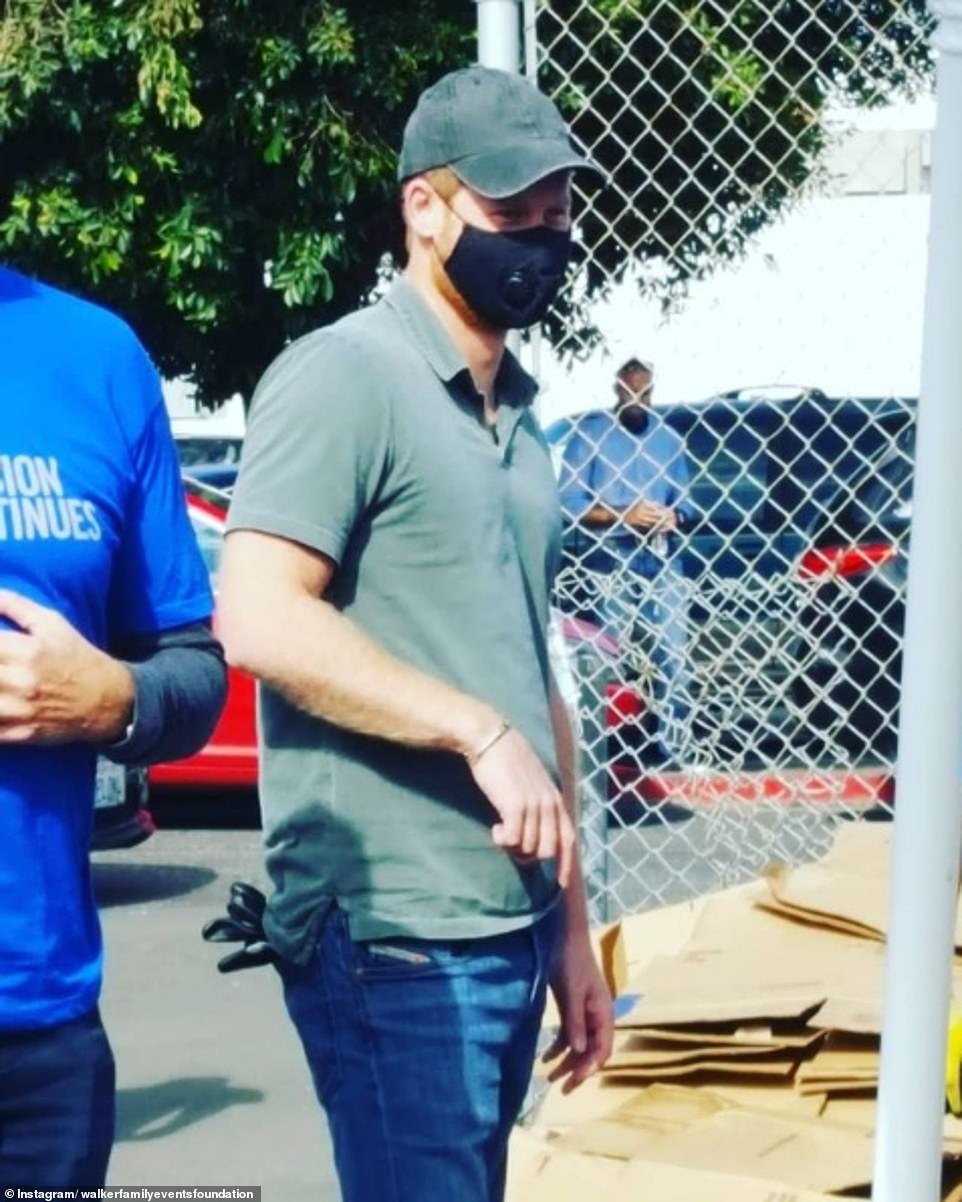 The royal cut a casual figure in denim jeans, a khaki polo top and cap, and could be seen donning a protective face mask 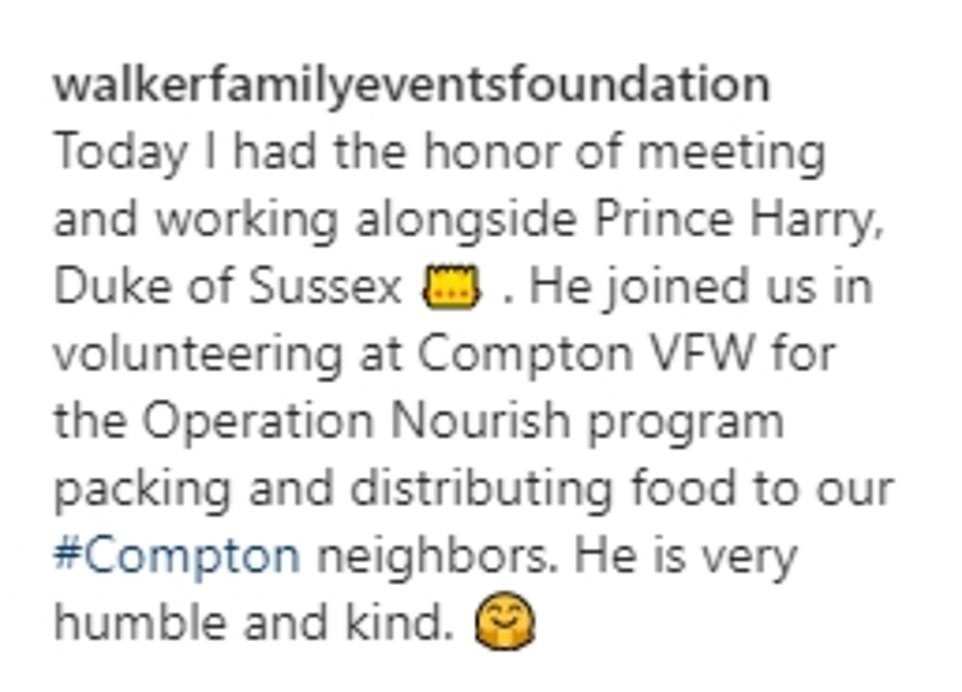 Taking to Instagram, another volunteer penned: ‘Today I had the honor of meeting and working alongside Prince Harry, Duke of Sussex’ (pictured)

In the photo, Prince Harry, who cut a casual figure in sneakers, has a pair of gloves hanging out of his back pocket, and can be seen packaging up bags of fresh produce.

The Inner City Child Development and Youth Foundation have partnered up with Compton Veterans and Los Angeles 3rd Platoon to distribute food weekly to the community.

The event encourages locals to help with the setting up, the handing out of fresh fruit and produce and clean up for the weekly effort which they say is ‘needed now more than ever.’

Later today, the royal will join a host of stars – including Bruce Springsteen and comedian Tiffany Haddish – at the annual Stand Up for Heroes event, which will broadcast online and on ABC News.

Prince Harry, who was known for years as the ‘joker’ of the royal family, will get the chance to that infamous wit to the test when he takes part in a virtual comedy fundraiser for the Bob Woodruff Foundation, an organisation that aims to ‘help veterans and military families thrive’.veterans in the US. 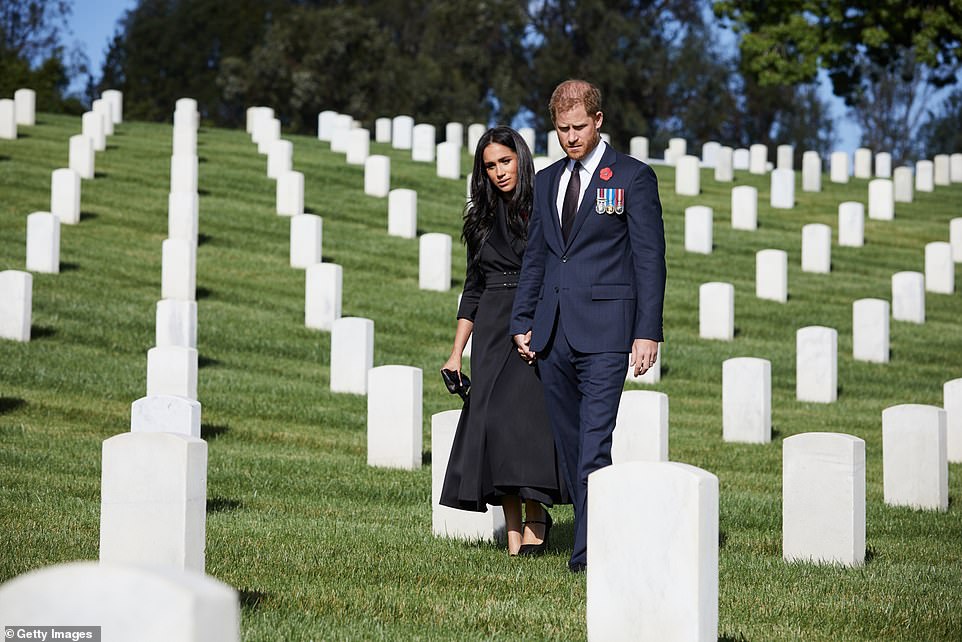 ‘For the last 14 years, the Stand Up for Heroes event has continued to inspire our nation and serves as a reminder of all of the brave individuals that have defended our country selflessly in our military,’ said Bob Woodruff, ABC News correspondent and co-founder of the Bob Woodruff Foundation.

‘This year, it is especially important that we unite to show support for their sacrifices as we come together virtually to stand up for our heroes.’

The event, held in partnership with the New York Comedy Festival, will see a host of famous faces take to the stage for musical and stand-up performances – and it will give Harry a chance to reunite with music icon Bruce, who previously shared the stage with the Duke in 2017 when he performed at the closing ceremony of the Invictus Games. 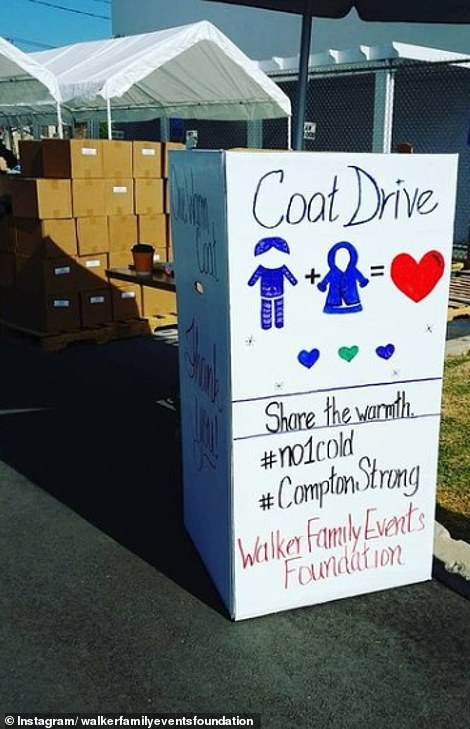 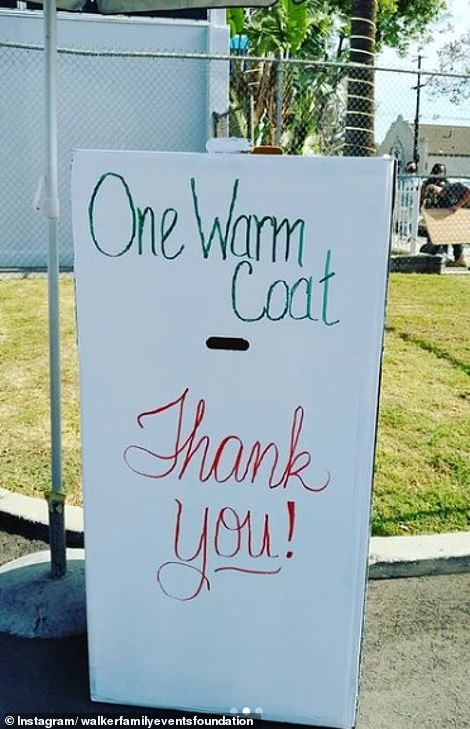 It is unknown exactly what Harry’s role in the event proceedings will be, however it is likely that he will open up about his own experiences in the military, something that he has done many times in recent years.

The Duke of Sussex was last seen when he and Meghan Markle sparked controversy by staging a photoshoot at the Los Angeles National cemetery on November 8, where they marked Remembrance Day in the UK by visiting the graves of fallen Commonwealth soldiers.

The couple’s visit to the cemetery was captured by fashion photographer Lee Morgan – a move that sparked furious criticism from some who felt that they had turned the event into a ‘publicity stunt’.

Meghan Markle and Prince Harry’s ‘rift with the royal family is widening’ because they insist on ‘doing things their own way whatever the cost’, royal expert claims

Katie Nicholl noted the Duke and Duchess of Sussex’s decision to publicise a visit to Los Angeles National Cemetery on Remembrance Sunday with the help of celebrity photographer Lee Morgan after Prince Harry’s request for a wreath to be laid at the Cenotaph was snubbed. Pictured, The Queen on Remembrance Sunday

Prince Harry and Meghan Markle are growing further apart from the royal family because they ‘do things their own way whatever the cost, while the Firm refuses to bend the rules’, a royal expert has claimed.

Katie Nicholl noted the Duke and Duchess of Sussex‘s decision to publicise a visit to Los Angeles National Cemetery on Remembrance Sunday with the help of celebrity photographer Lee Morgan after Prince Harry’s request for a wreath to be laid at the Cenotaph was snubbed.

She told OK! magazine that the display will have only further frayed his strained relationship with the Firm, adding: ‘It highlights the great divide between Harry and the royal family.’

‘There is such a gaping cavern now and exercises like this only serve to widen that gap rather than heal the rift,’ she continued.

‘Harry and Meghan do things very differently to the royal family and to me it shows how determined they are to do things their own way whatever the cost.’

The royal expert said the couple’s decision to ‘personally recognise’ Remembrance Sunday and behaviour similar to this could harm their future roles in the monarchy.

Katie suggested it would’ve been painful for Prince Harry, 36, to have been ‘left out’ of this year’s Remembrance commemoration in London – despite asking for a wreath to be laid on his behalf.

The duke, who spent 10 years serving the military, is thought to have been ‘deeply saddened’ after palace aides refused to grant his request, according to The Times.

But Katie insisted that the royal family are not prepared to bend the rules.

It later emerged that Prince Harry’s wreath was made at the Royal British Legion’s Kent HQ for £1,000, but lay there forgotten.

Prince Harry and Meghan, 39, stepped back from their royal duties in March – but the royal expert said Buckingham Palace will have been watching their behaviour.

She said the Sussexes will have been monitored ‘very closely’ during this trial year and probation period.