PrettyLittleThing has been praised after unveiling a new fashion campaign shot during the coronavirus pandemic.

The UK-based online retailer has updated its website with photos of models posing on remote sandy beaches in Australia for their ‘EveryBODYinPLT’ campaign, which was shot using drones because of ongoing social distancing guidelines.

During the shoot, the crew, hair and makeup teams wore face masks and the models were shot individually in isolated areas amid the coronavirus pandemic.

Social media users have been left gushing over the stunning campaign, with one commenting: ‘This video is really breathtaking. Amazing.’ 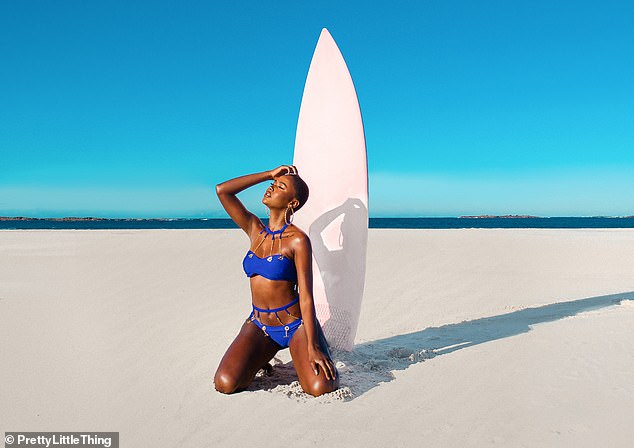 UK-based brand PrettyLittleThing, has been praised for using drones to capture their latest campaign, which was shot in isolated locations (Pictured: Influencer Vakoo in the campaign) 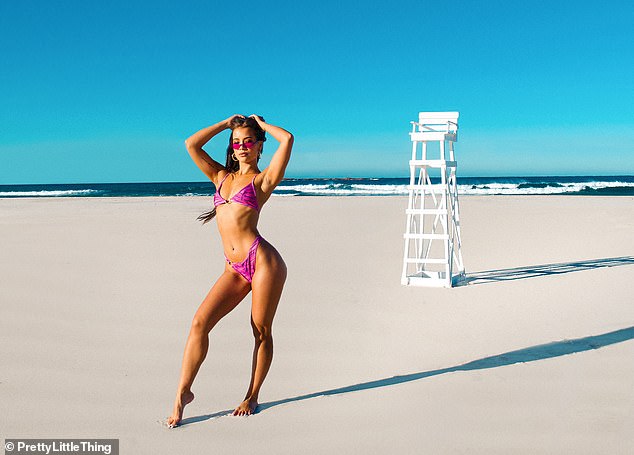 Models, including Samantha Rayner, the crew and beauty teams wore face masks for the shoot in Australia  (pictured, Samantha)

PrettyLittleThing, who usually works with models and influencers from across the globe, partnered with Australia based creative agency Komodo, to achieve their desired look.

Komodo has previously worked on fashion campaigns with brands including Boohoo, Missguided and New Look.

The brand revealed they chose Australia for the campaign because they want to encourage international tourists to visit once travel restrictions are lifted.

The images were captured in and around New South Wales using some of Australia’s best known influencers including Samantha Rayner, Kaela Tavares, Ashleigh Menin, Ariella Nyssa, Vakoo and Bruna Lapinskas. 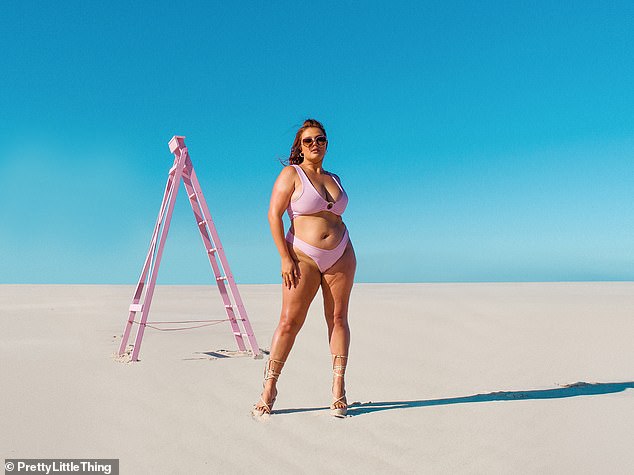 PrettyLittleThing chose Australia for the campaign in the hopes of encouraging tourism once travel restrictions are lifted (Pictured: Bruna Lapinskas)

Each of the girls were shot individually in Port Stephens, Stockton Sand Dunes and Sydney’s Carriageworks.

A video made to support the images starts on one of Australia’s famous white sandy beaches, with sweeping drone shots of beautiful scenery, before heading to the sprawling sand dunes and finally landing in industrial Sydney.

CEO and Founder of PrettyLittleThing, Umar Kamani, explained the campaign is about celebrating feeling good in your own body.

He said: ‘I am really excited to be launching this campaign with We Are Komodo. 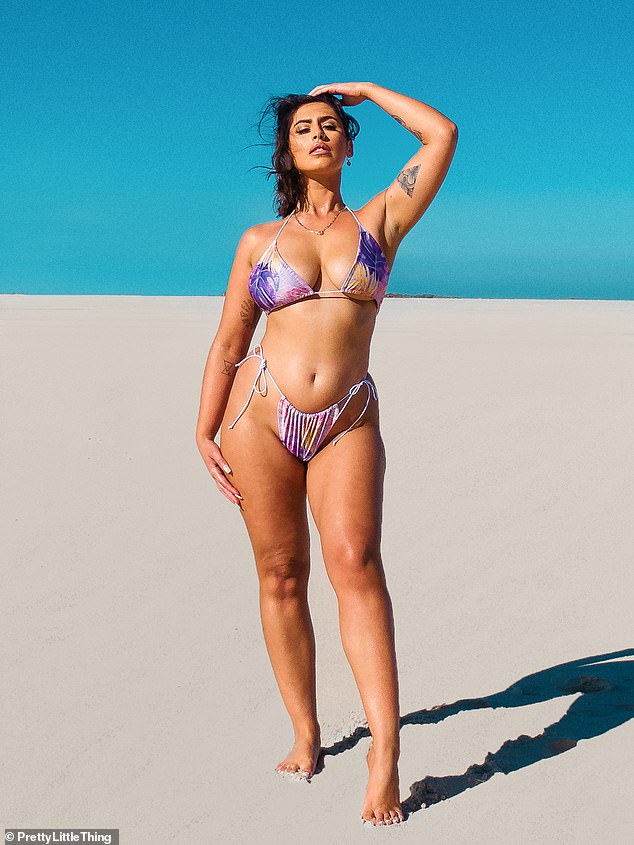 The campaign recruited models and influencers from across Australia to take part, and shot the women in remote locations with a drone( Pictured: Ariella Nyssa in the campaign) 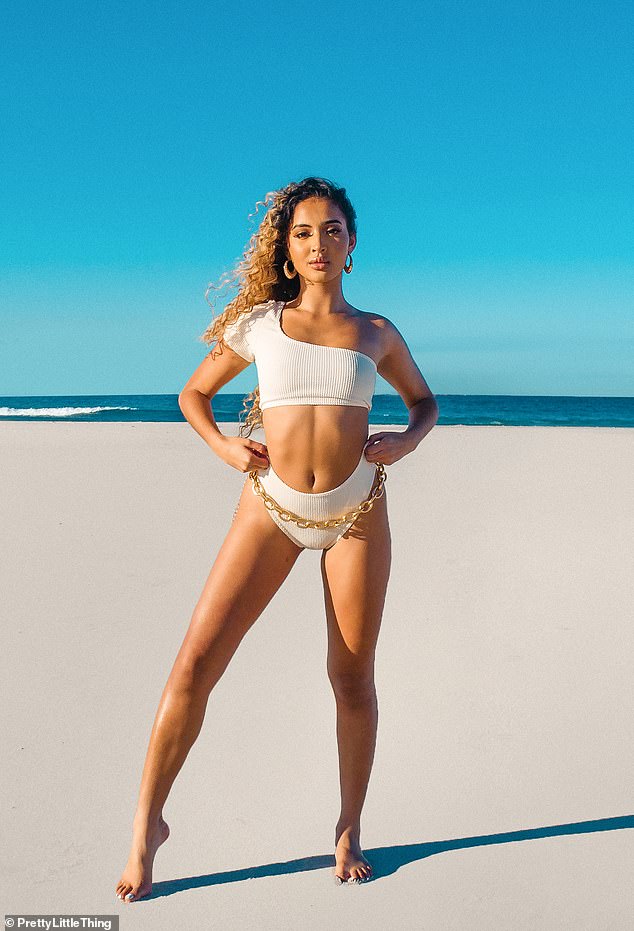 The campaign, which is called The Escape, is about celebrating feeling good in your own body (Pictured: Kaela Tavares in the campaign) 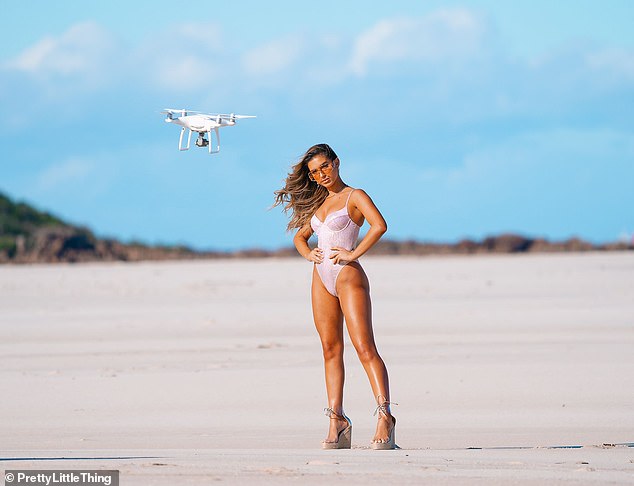 Rather than getting up-close with a photographer, models were shot with the use of a drone in a Covid secure way in order to adhere to the social distancing guidelines (Pictured: Ashleigh Menin in the campaign)

‘In light of the Covid crisis we as a brand have had to adapt to new ways of working and for myself and our team to be the first fast fashion retailer to shoot solely on a drone proves why PrettyLittleThing are always at the forefront of the industry.

‘Our EveryBODYinPLT campaign has been extremely successful since launching in 2018 and we are proud to be working with some incredible talent and showcasing different sizes and ethnicities in this global campaign.

‘We want everyone to feel good in their own skin and bodies, to feel confident and empowered no matter your shape, size, ethnicity or status.

‘The models and Komodo team have been fantastic to work with and given the social distancing restrictions being relaxed in Australia before anywhere else this was the perfect setting for us. 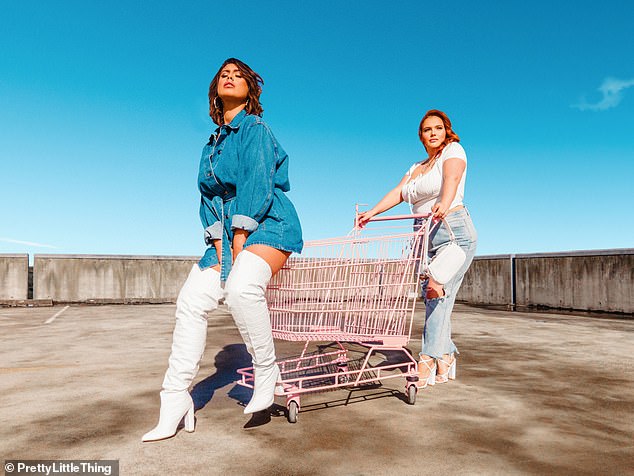 While some influencers were shot at the sandy beaches of Australia, others posed in industrial locations (Pictured: Bruna Lapinskas) 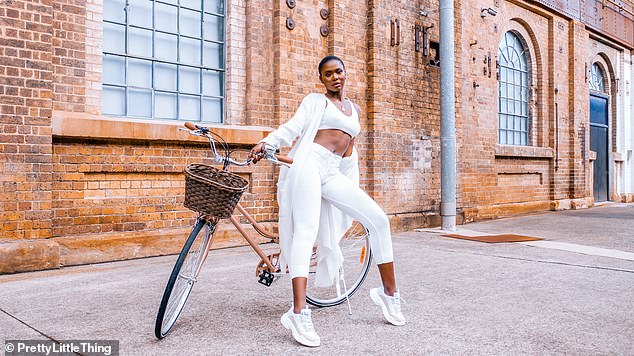 Footage of the campaign has been viewed over 51,000 times, since being shared on PrettyLittleThing’s Instagram (pictured: Vakoo in the campaign)

‘The teams dedication to produce this campaign during a very difficult time has allowed us to give our customers a new creative in a non-traditional sense which is what is so important to us as a lifestyle brand – producing new and engaging content across all of our platforms.’

Founder of Komodo, Nick Seymour added: ‘We at Komodo are stoked that PrettyLittleThing decided to work with us on this revolutionary campaign.

‘Our mantra is ‘Never Do Normal’ and we are always looking for innovative ways to inspire our clients and this was a great opportunity to do something different.

‘The final result is epic and we are so proud of it! Australia is such a stunning backdrop for global campaigns and it’s incredible to shine a spotlight on how versatile it can be by bringing one of the world’s largest online retailers to our shores for a global campaign.’ 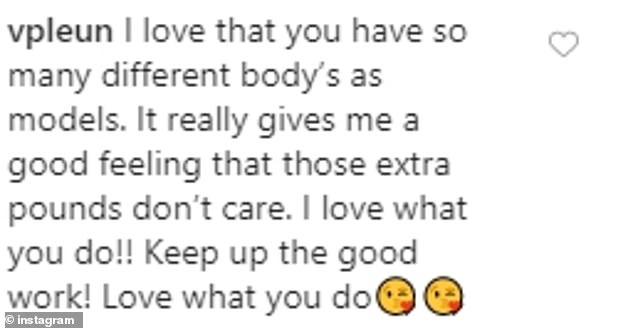 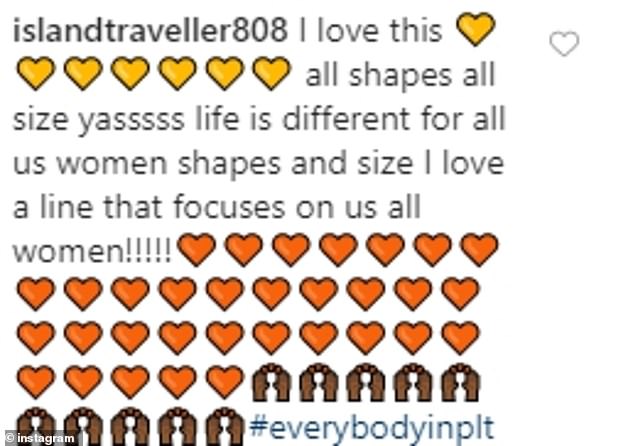 Social media users have heaped praise on the brand for the campaign, with one commenting that the video was ‘breathtaking’

Fans of the brand took to their Instagram account, praising the campaign with one commenting: ‘I love that you have so many different bodies as models.

‘It really gives me a good feeling that those extra pounds don’t care.

The Escape; launches on 01.07.20 at www.prettylittlething.com