Chelsea Clinton may be a busy, working mom, but the former first daughter couldn’t resist stopping to catch up with a friend and coo over her baby on Friday.

The 39-year-old, who is expecting her third child, was seen arriving home in an Uber when she ran into a friend who was pushing a baby in a stroller outside of her New York City apartment.

Chelsea kept her growing baby bump covered in a long black wool coat that stopped right at her calves. 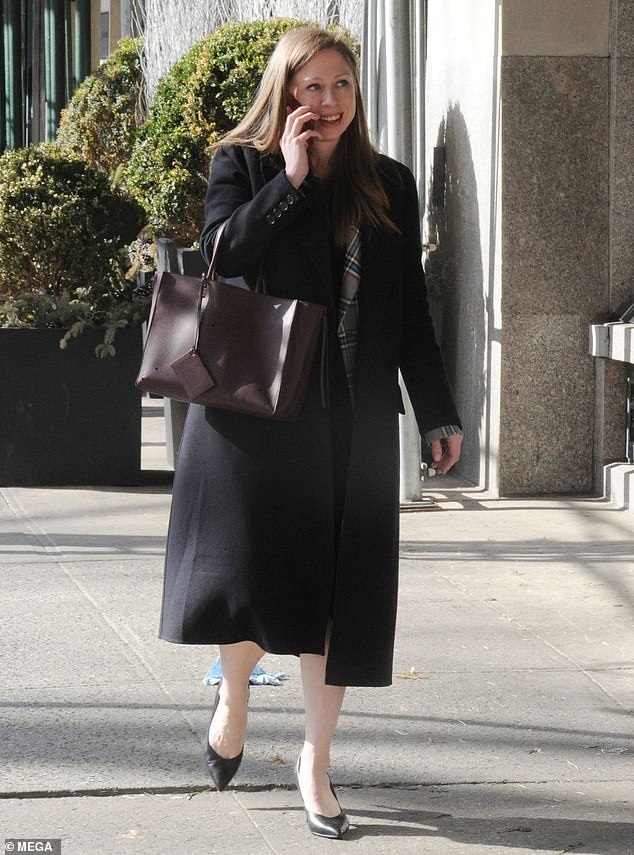 Keeping warm: The former first daughter has her growing baby bump covered with a long wool coat when she arrived home in an Uber. The coat, which she left open, stopped at her calves 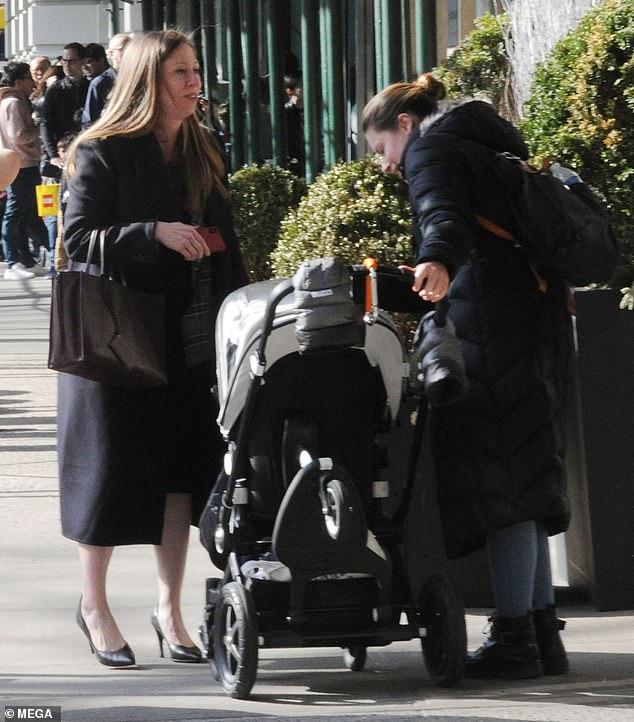 Exchanging pleasantries: Chelsea ran into a friend who was pushing a baby in a stroller outside

She wore a plaid blazer underneath her coat, and with spring just a week away, she embraced the warmer weather and bared her legs in her classic black pencil dress.

The former first daughter accessorized her look with a dark brown leather handbag that she held in the crook of her elbow and a pair of classic black heels.

Chelsea’s light brown curls were dried straight and worn loose around her shoulders for the outing.

The sidewalk was crowded when she arrived home, but she immediately spotted an acquaintance who was pushing a stroller.

The unknown woman was dressed casually in a long black puffy coat and jeans for the afternoon stroll, and she and Chelsea exchanged pleasantries. 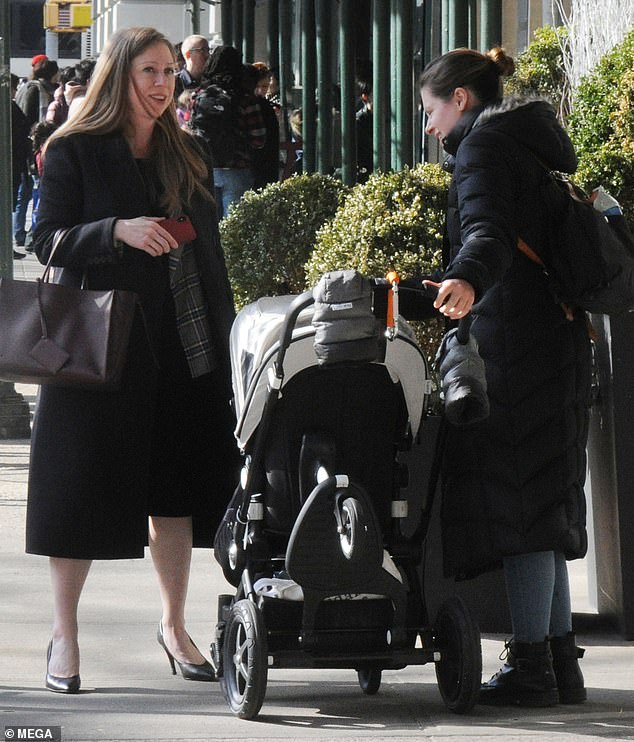 Outfit of the day: Chelsea wore her wool coat over a black and white plaid blazer and a classic black pencil dress 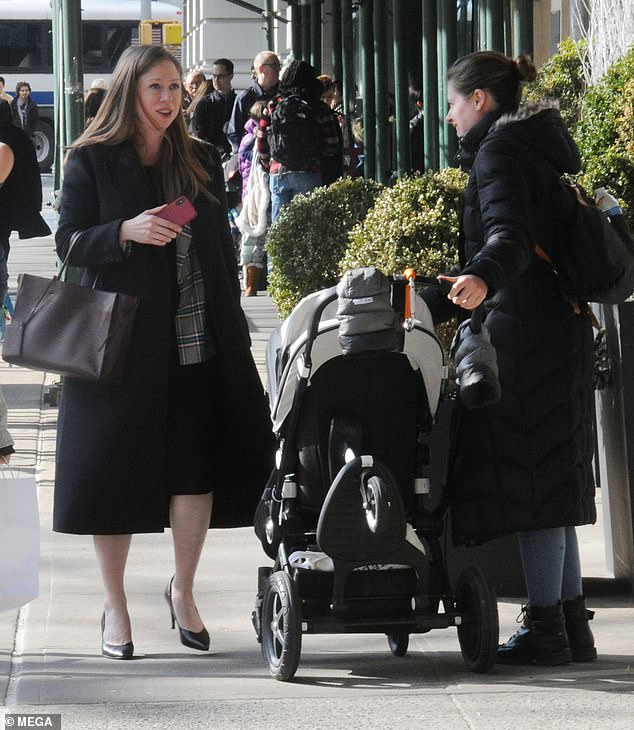 No tights: With spring just a week away, she embraced the warmer weather and bared her legs 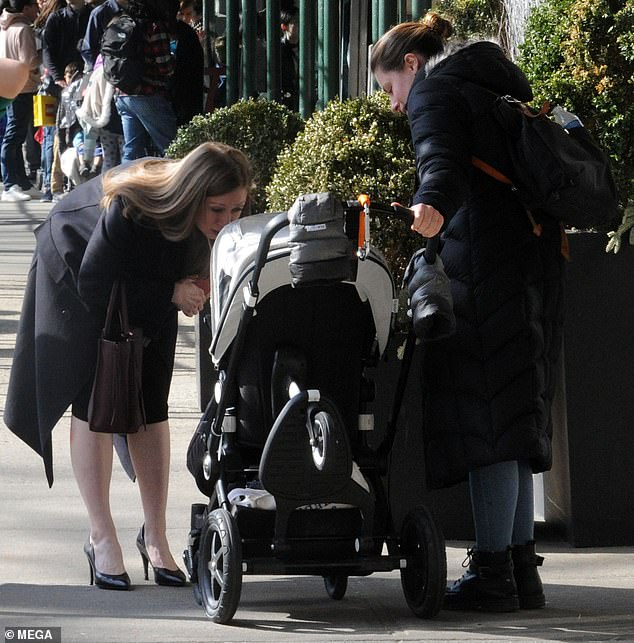 Can’t resist: Chelsea leaned over to coo at the baby that was inside the stroller 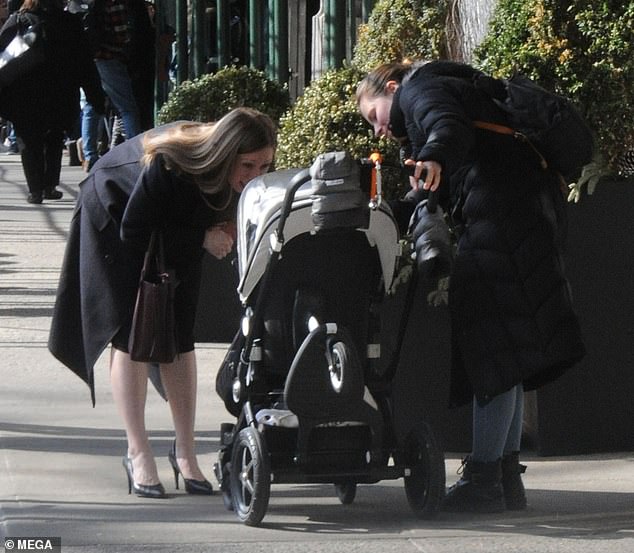 Baby on board: Chelsea is expecting her third child with her husband, Marc Mezvinsky, this summer

The expectant mom couldn’t resist leaning over and cooing at the little one who was seated in the stroller.

After they talked for a few minutes, Chelsea received a phone call and ended their conversation.

The soon-to-be mother-of-three had a smile on her face as she chatted on her cellphone and made her way inside of her apartment building.

Earlier in the day, Chelsea took to Twitter to condemn white nationalism and offer her condolences to the victims of the New Zealand massacre after a terrorist shot and killed 49 worshippers in Christchurch mosques.

‘Heartbroken & horrified by the white nationalist terrorist attack during Jummah on the mosques and Muslim community in Christchurch,’ she wrote. 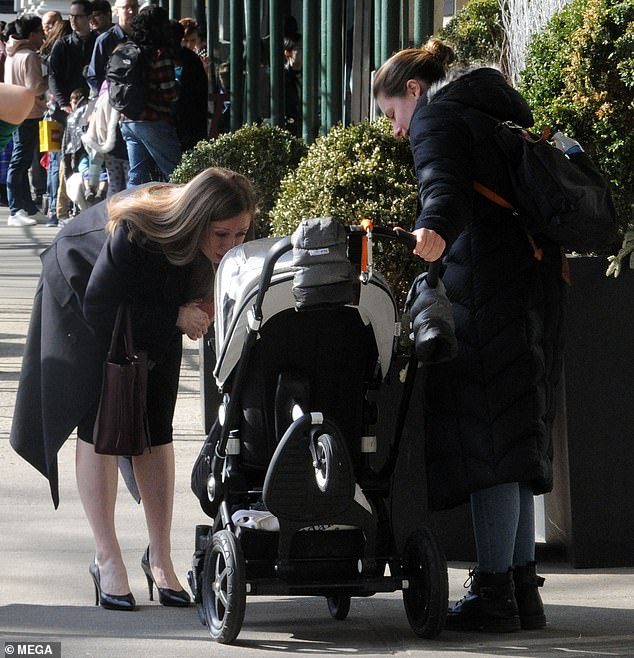 Almost time: The expectant mom looked like she was ready to welcome another baby into her family 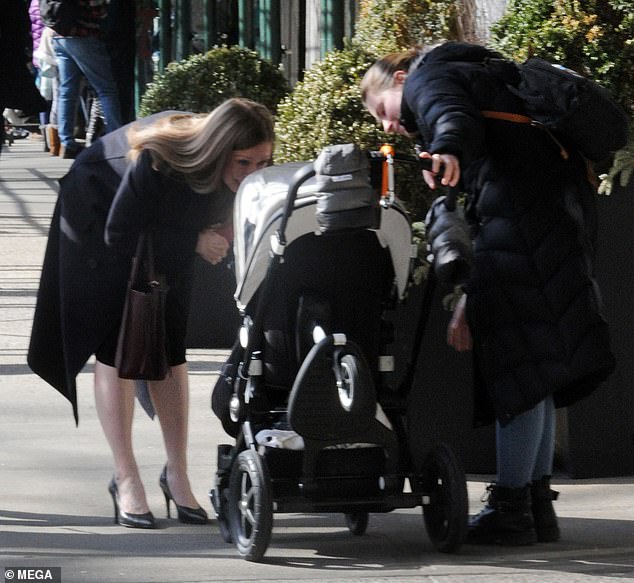 Too cute: At one point, both Chelsea and her friend looked in on the baby 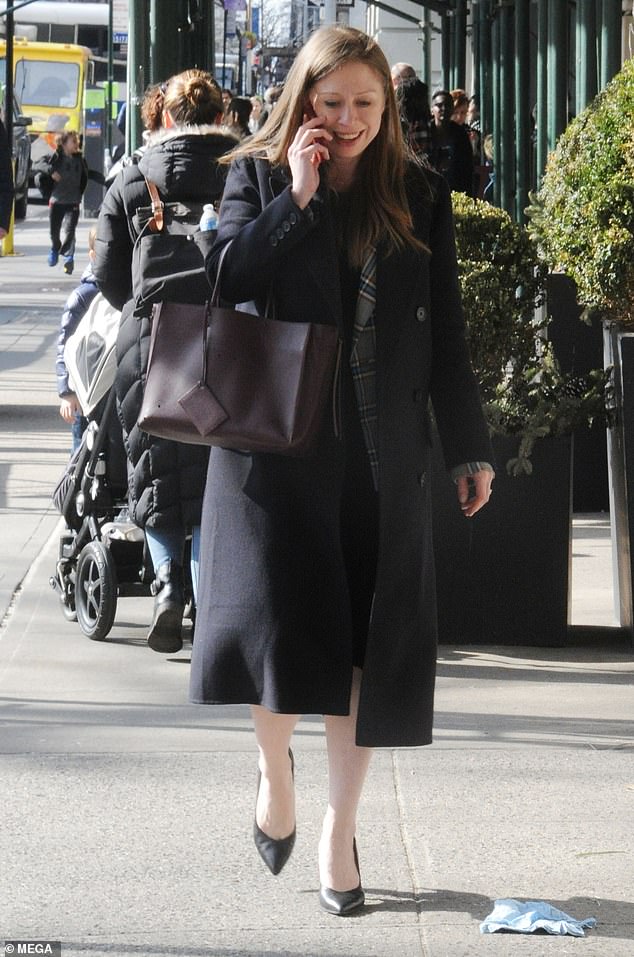 Moving on: After talking to her friend for a few minutes, Chelsea took a phone call

Good talk? The soon-to-be mother-of-three had a smile on her face during the conversation. She appeared to be in good spirits as she made her way inside her home 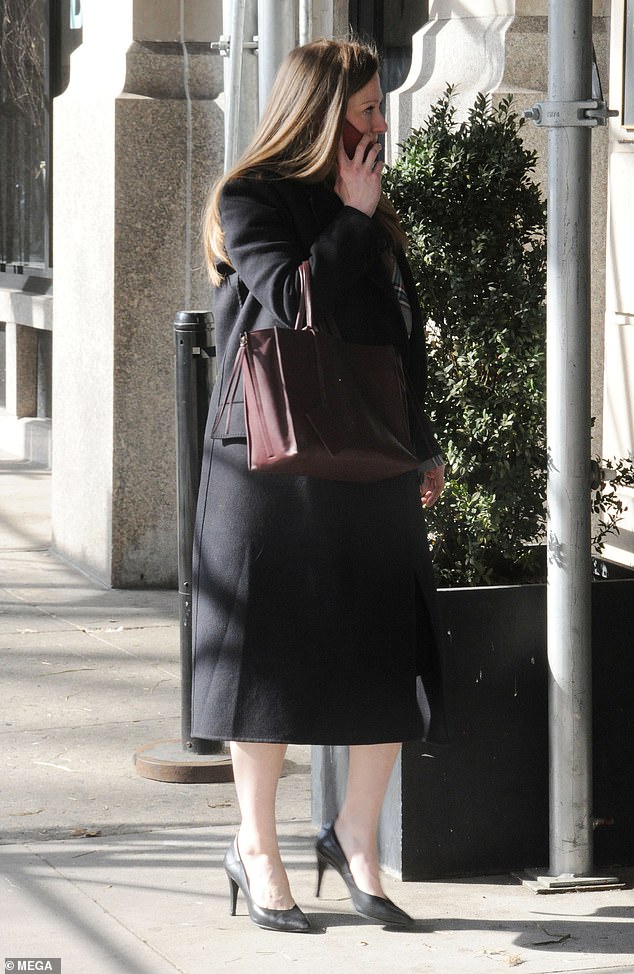 Taking a call: Chelsea was on the phone when she headed inside her apartment building

‘Keeping all affected by this tragedy in my heart and prayers. We need a global response to the global threat of violent white nationalism.’

Chelsea and her husband, Marc Mezvinsky, are expecting their third child this summer. The couple, who married in 2010, have a four-year-old daughter, Charlotte, and a two-year-old son, Aidan.

The former first daughter shared the joyous news on Twitter in January.

‘Marc and I have loved watching Charlotte be such a wonderful big sister and we’re excited to watch Aidan become a big brother! We cannot wait to meet our newest addition later this summer,’ she wrote.

Chelsea later noted that her parents, Bill and Hillary Clinton, are ‘thrilled’ to be welcoming a third grandchild.

The news came one month after it was announced that she was working her fourth children’s book.

Accessories: Chelsea carried a dark brown handbag in the crook of her arm and had on classic black pumps 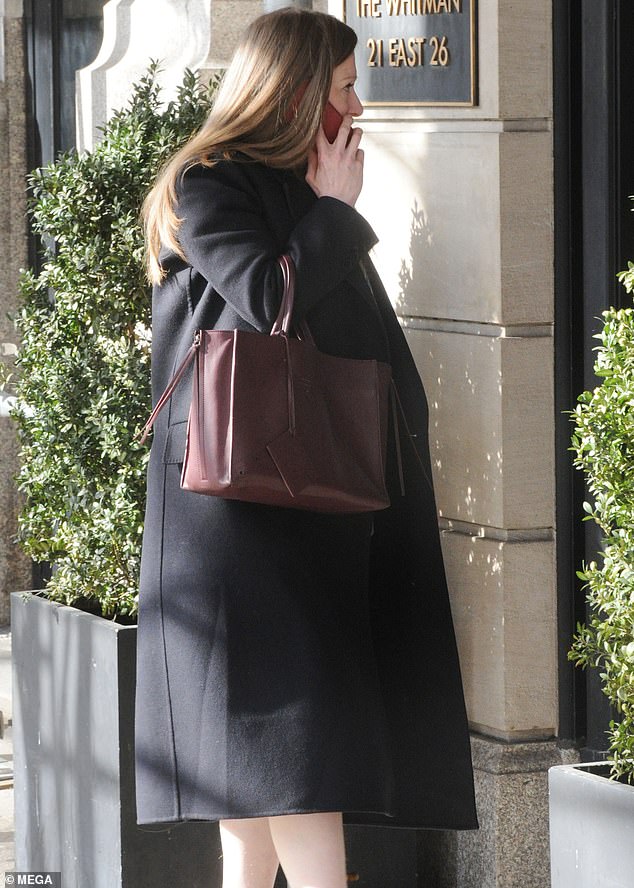 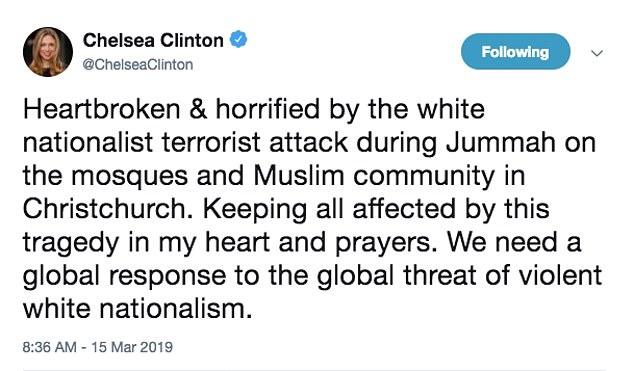 ‘We need a global response’: Earlier in the day, Chelsea took to Twitter to condemn white nationalism and offer her condolences to the victims of the New Zealand terrorist attack

Expectant mom: Chelsea showed off her baby bump during a public appearance in California last month. She wore a black blazer over a polka dot top 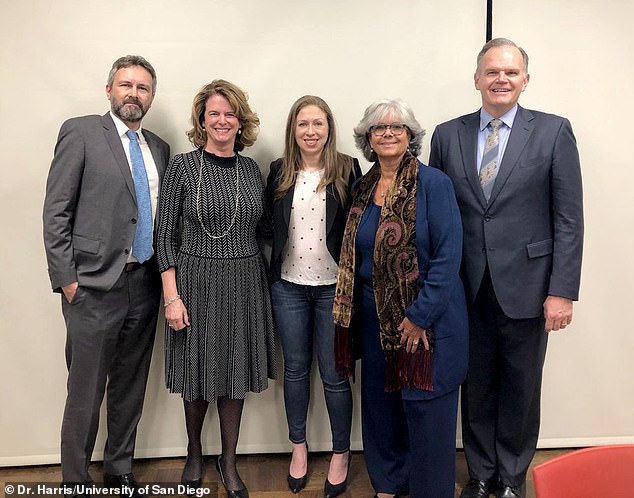 Author: She was promoting her children’s book, ‘She Persisted Around the World: 13 Women Who Changed History.’ She changed into a different top to visit the University of San Diego 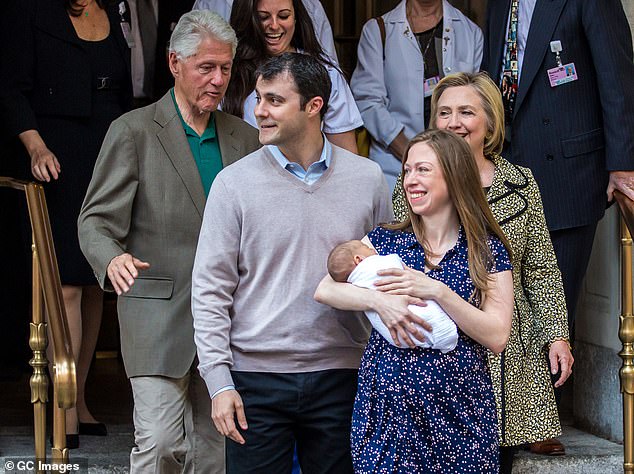 Family: Chelsea and Marc are parents to a daughter, Charlotte, four, and a son, Aidan, two. They are pictured leaving the hospital with her parents after Aidan’s birth in 2016

Chelsea’s upcoming book, ‘Don’t Let Them Disappear,’ is about endangered animals and is slated to be released in April.

‘In this book, Chelsea Clinton introduces young readers to a selection of endangered animals, sharing what makes them special, and also what threatens them,’ said Penguin, the publisher of the book.

‘Taking readers through the course of a day, “Don’t Let Them Disappear” talks about rhinos, tigers, whales, pandas and more, and provides helpful tips on what we all can do to help prevent these animals from disappearing from our world entirely.’

Chelsea spent some time in California last month while promoting her third book, ‘She Persisted Around the World: 13 Women Who Changed History,’ which was released last year.

The expectant mom showed off her baby bump in San Diego, donning two different polka dot tops for her appearances at a book signing and a chat at the University of San Diego.