Forget rubbing them on your oven door, as men and women are now using dishwashing tablets to banish stubborn stains from their clothes – with incredible results.

Over the past few months, the humble dishwashing tablet has become the biggest cleaning trend of 2020 – and it has been used to improve the appearance of everything from ovens to shower screens and even washing machines themselves.

The latest iteration, however, sees homeowners throw several tablets in with their dirty, grimey clothes, only for the items to come out good as new a couple of hours later. 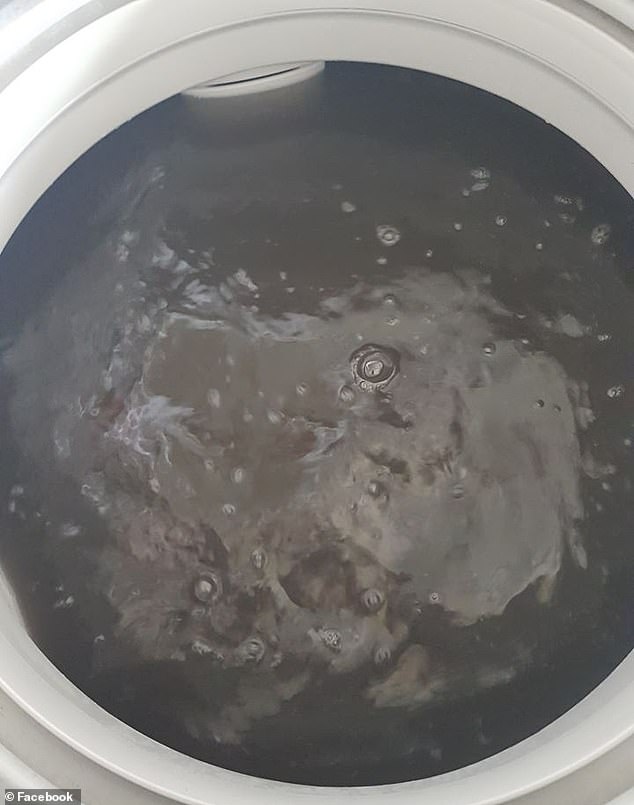 Forget rubbing them on your oven door, as men and women are now using dishwashing tablets to banish stubborn stains from their clothes (clothes pictured in the washing machine) 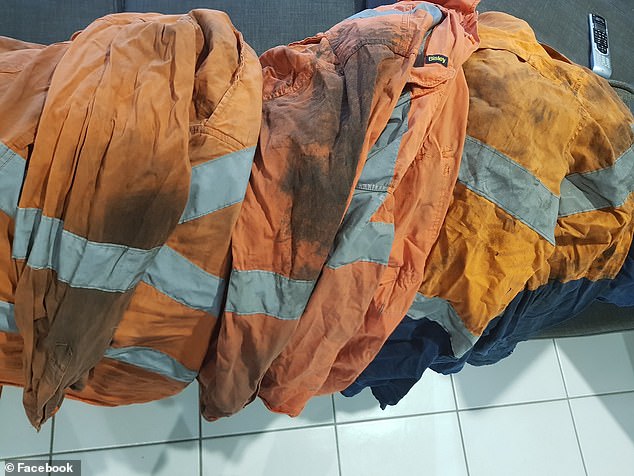 ‘My husband always has black coal and grease on his work clothes,’ one woman posted on Facebook.

‘He usually washes them at work in their industrial machines. But occasionally at home I give them an extra soak.’

She continued: ‘Today I decided to chuck his work clothes in to wash with four dishwashing tablets.

‘I had done the dishwashing tablet clean to my washing machine a few days ago (water was clear so washing machine obviously pretty clean) and thought the same idea might help me with grease and black stuff on his clothes.

‘This is a picture of his already washed and “clean” work clothes in the washing machine with the tablet,’ she added.

‘Yuck! It didn’t get everything out, but they are much better! I might start sending a few dishwashing tablets to work with him to wash with a bit more regularly now!’ 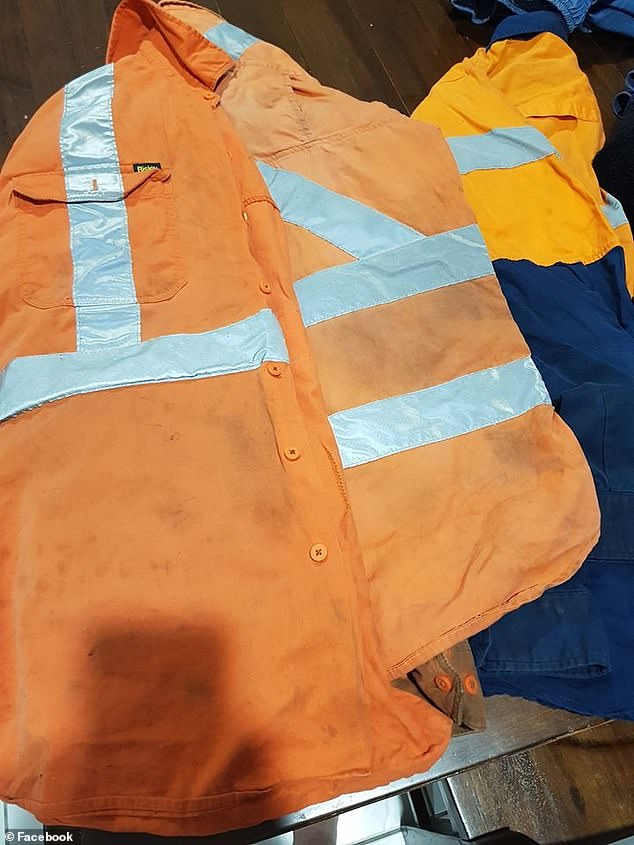 While the woman said the results were not perfect, she added that his work clothes (pictured after) were about 60 per cent cleaner

Hundreds were hugely impressed with the results of the dishwashing tablet washing trick, writing things like ‘that’s amazing’ and ‘I can’t wait to try it’.

‘Carpet shampoo also does the trick,’ one commenter wrote.

‘Soak your clothes in a bucket with carpet shampoo, then put the clothes on a normal cycle with laundry liquid. My denim came out like brand new!’

Others suggested Coca Cola and vinegar as also being great household products for getting rid of stubborn stains.

The woman also shared pictures of her husband’s work clothes after both a regular wash, and a wash with four dishwashing tablets.

‘They’re not perfect, but I’d say they are about 60 per cent cleaner!’ she added.

She said she used four tablets by Fairy to carry out the wash, and put it on a hot cycle. 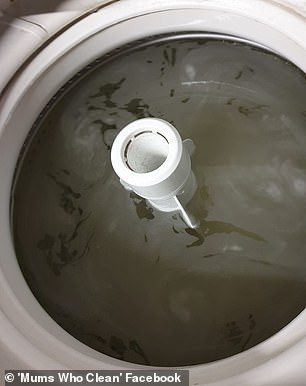 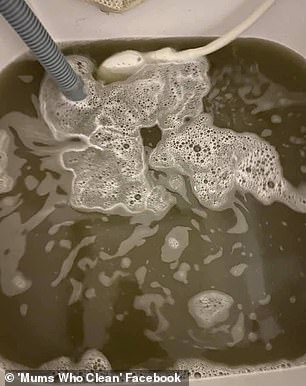 Others have ran dishwashing tablets through their physical machines to clean them out, and revealed their horror after discovering how much dirt was lurking inside (pictured) 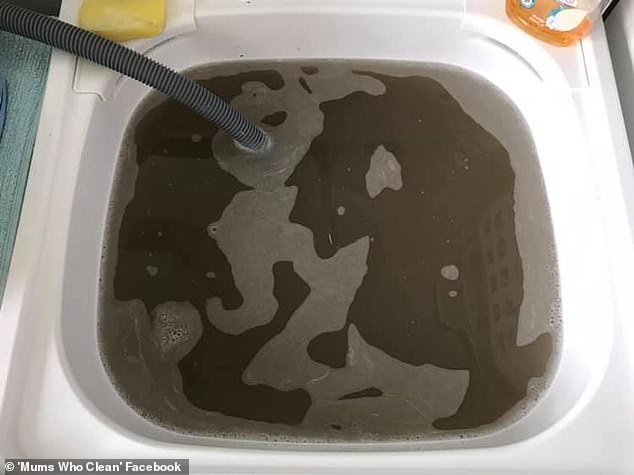 While many were keen to try the trick for themselves, there were some who said it pays to be careful as dishwashing tablets could be too harsh for some clothes.

‘I tried this a few times and it didn’t really work,’ one woman wrote.

‘I have strip washed nappies before and they came up so clean, but it didn’t really work with my partner’s work clothes.’

Another said: ‘It might work on uniforms and heavy duty uniforms, but dishwashing tablets have caustic soda in them so I’d worry about them damaging some clothes’.

How do dishwashing tablets work?

Phosphates: As one of the main ingredients in dishwashing detergent, phosphates remove calcium deposits and assist in breaking up food stuck to dishes, pots and pans.

Enzymes: These biological catalysts work on the cellular level to break down food deposits and remove oil and grease by loosening proteins and peptides. 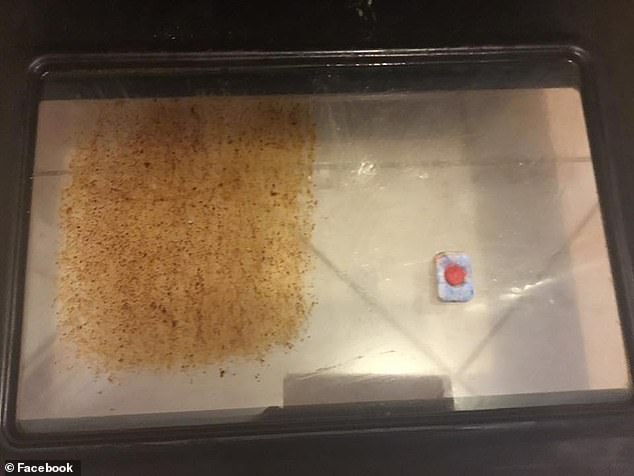 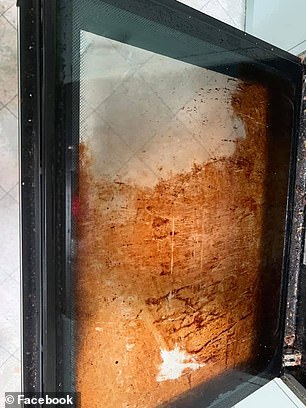 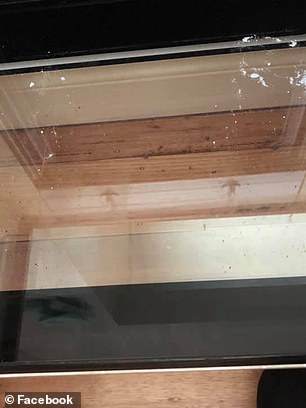 Earlier this year, shocked mums shared snaps of their washing machines, after they used dishwashing tablets to clean them of any excess dirt and grime.

One video shared on Facebook shows the clear water in the machine turning murky after five minutes into a cycle even though the owner had cleaned the appliance with hot water and vinegar a few weeks prior.

To try this for yourself, all you need to do is dip the tablet into a pot of warm water, and then usie it to gently rub off all the stains on the door.