Parents have rallied behind Kmart Australia after the retailer pulled a $6 bridal costume marketed to kids from the shelves amid criticism.

Sally Lord, from New South Wales, started a petition after the dress was removed from shelves saying that ‘kids should be kids’ and some children would have liked the dress for Halloween.

‘Recently you took away a role play wedding dress for young children because a mother believed it portrayed child marriage and she was upset by it,’ Sally wrote on Change.org.

‘A lot of parents disagree and want it put back on the shelves as they believe there is nothing wrong with it.’ 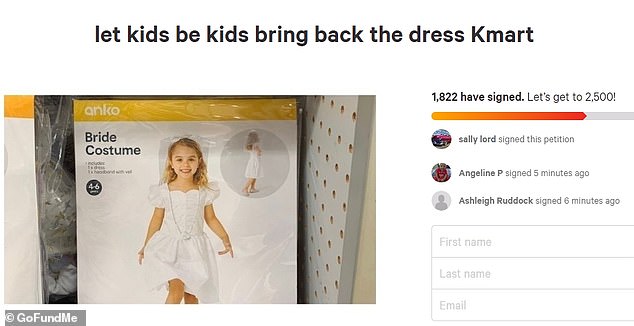 ‘Recently you took away a role play wedding dress for young children because a mother believed it portrayed child marriage and she was upset by it,’ Sally wrote on Change.org

Sally explained that the dress helps ‘children with their imagination’ and that she wouldn’t stop her own kids from trying it on.

‘By taking this off the shelves you have taken away a child’s wish to dress up as a bride or wear it/hack it for a Halloween costume. Maybe reword it so it doesn’t contain the word marriage or bride?’ She said.

On Wednesday morning Kmart ‘sincerely apologised’ for stocking the dress and said they had taken it off the shelves.

‘Kmart Australia regrets the decision to range the bride costume (ages 4-6 years), it was not intended to cause offence and we sincerely apologise,’ a spokesperson told FEMAIL.

‘We have made the decision to withdraw this product and we encourage customers who have product concerns or feedback, to please get in contact with our Kmart Customer Service team.’

Complaints about the ensemble began when Melbourne mother Shannon Barbone likened it to making light of ‘child brides’. 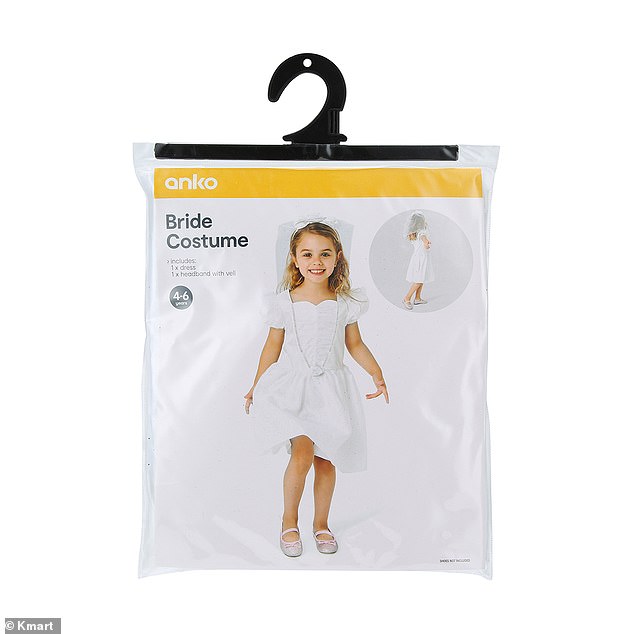 Shannon was shopping for a Halloween outfit for her young daughter when she came across the white gown nestled between the fairy and unicorn costumes.

Outraged by what she saw as a promotion of ‘child marriage’, Shannon started a petition on Change.org to see the dress removed completely from stores.

‘A child bride costume currently exists on Kmart shelves in children’s sizes,’ she wrote on the petition, which has been signed by 179 people.

‘Tell Kmart this is beyond inappropriate and offensive and that they have a social responsibility to pull this item off their shelves immediately.’

The dress, which has a hemline down to the knees and includes a veil and sweetheart neckline, is targeted for girls aged between four and six.

‘Each year 12 million children (girls as young as six years old – the same size as this costume) are sold or married off by their family without their consent. That’s one million child marriages per month,’ Shannon said. 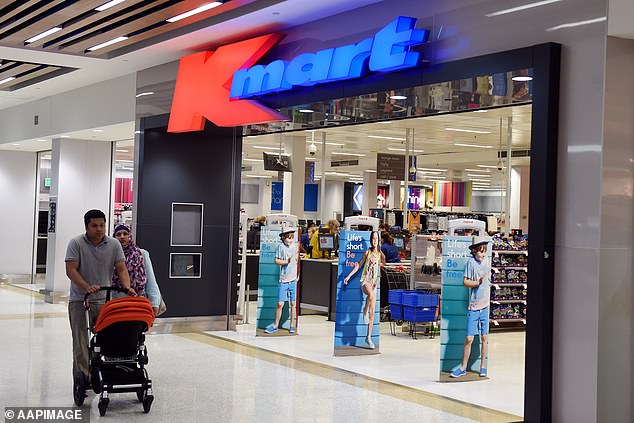 A number of equally concerned parents responded to Shannon’s petition by questioning why the costume was made in the first place.

‘Marriage should never be held up as a goal for little girls to achieve, let along the inappropriateness of emulating child marriage,’ one woman said.

‘Are there little groom costumes? I bet not,’ said another.

A third added: ‘This is wrong on so many levels. It disgusts me.’

Teenager banned from her own BROTHER’S wedding photos

Foodie tackles frozen honey trend with VERY surprising results – so would you try it?