A couple of new parents who were elated to discover they would be having twin girls — in spire of their Down syndrome diagnosis — are now spreading their message of acceptance to other parents.

Stay-at-home mother Rachael Prescott, 29, and her husband Cody Prescott, 32,  from have four beautiful children in Salem, Oregon — including twin girls who both have Down syndrome.

While the condition certainly brings challenges, though, the Prescotts say it’s a blessing, not a defect, and they are working to spread awareness about parenting children with Down syndrome. 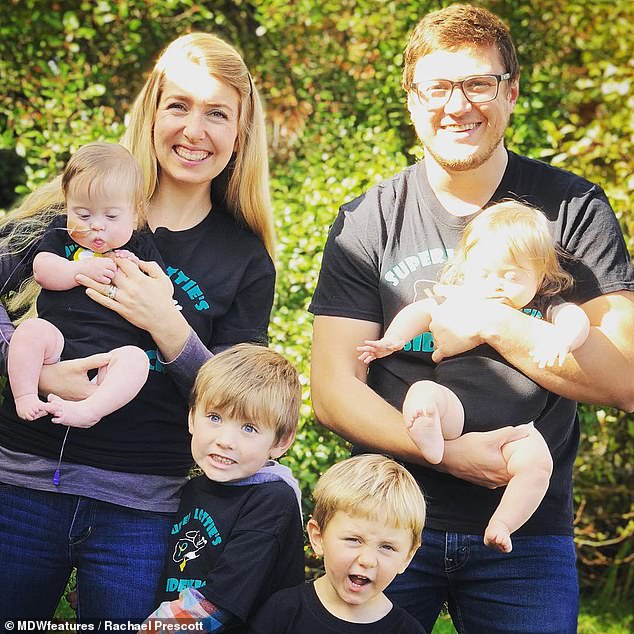 Family: Rachael Prescott, 29, and her husband, Cody Prescott, 32, welcomed twin daughters who both had Down syndrome. Pictured is the whole family, including the couple’s two sons 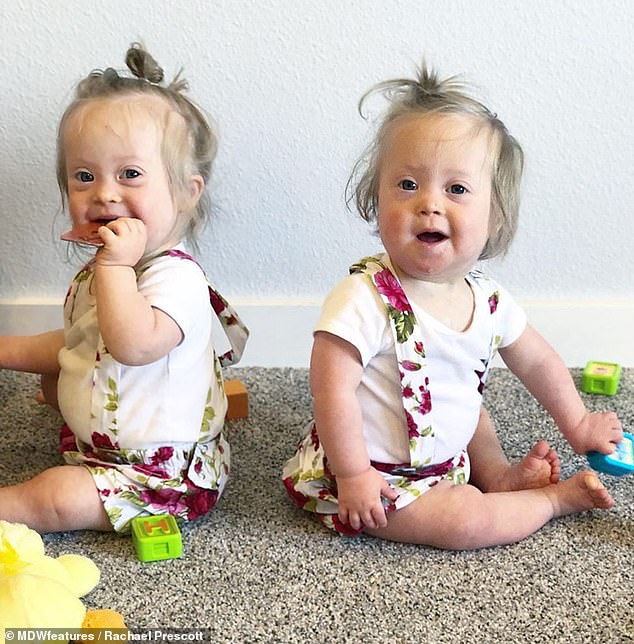 At 15 weeks into Rachael’s pregnancy, when the couple first found out they were having twins, Cody was elated. But Rachael felt unprepared as she knew there would be more monitoring and risks involved.

They were told from ultrasounds that Lottie had a heart defect known as atrioventricular septal defect (AVSD), which affects the blood flow from the chambers.

Although they were aware of a possible link between AVSD and Down syndrome, they decided to refuse further tests as it wouldn’t make any difference to the love they would have for their twins.

The twins were born on February 1, 2018 and were diagnosed with Trisomy 21 — the most common type of Down syndrome. 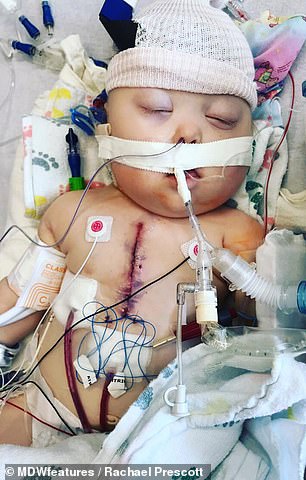 Difficult: Both twins were born with heart defects and Down syndrome. But Lottie had to have open-heart surgery (pictured before and after) for her defect 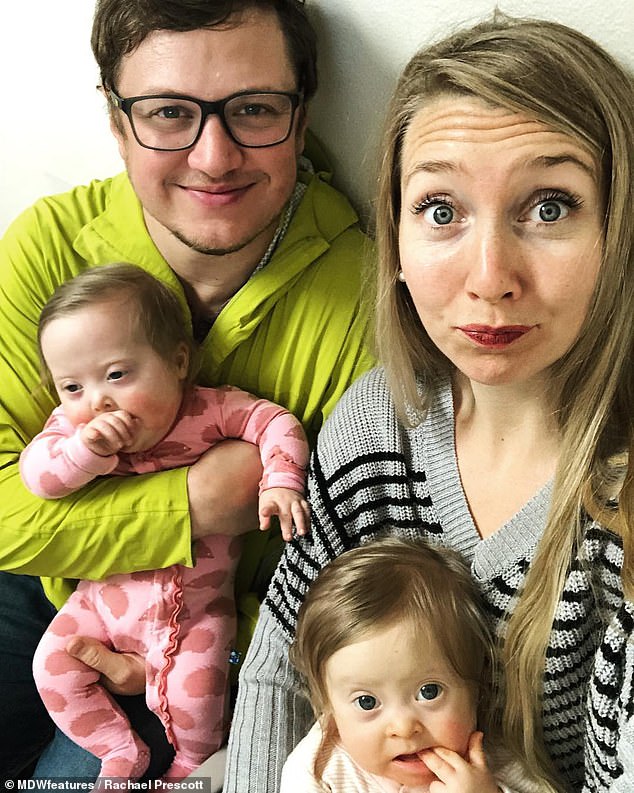 Not giving up: The parents from Salem, Oregon, decided early on they would not terminate the pregnancy no matter the defects that formed

Nettie had an atrial septal defect (ASD), a small hole in the wall between the two upper chambers of the heart which healed on its own after she was born.

However, Lottie had AVSD, and needed open heart surgery. The requirement for heart surgery was for her to weigh 12lbs or be six months old. Her heart condition prevented her from gaining weight, so at just four months old she had an operation to closer her PDA — sealing a persistent opening between the two major blood vessels leading from the heart.

Having already undergone heart surgery with their son Hudson when he was two, the parents were nervous to repeat the experience again.

‘Our first son Easton has no heart defects, but Hudson has a valve defect, an ASD and an VSD,’ Rachael said. ‘Our experience with him was stressful, however it turned out to be very useful as it prepared us somewhat for Lottie’s surgery, which was a completely different monster.’

She continued: ‘When we found out we were having twins, Cody felt lifted. However, I knew another child meant a more monitored pregnancy and risky labor, and so I felt less in control and very unprepared.

‘Even after doctors discovered our girls each had heart defects in utero, we refused testing…We weren’t bothered with the possibility of Down syndrome, for knew we would love our girls either way. 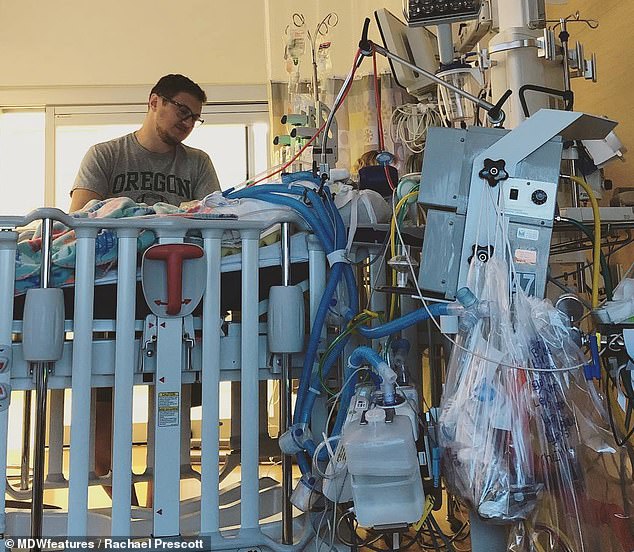 Staying positive: It was a difficult road for Lottie after she was born. Her sister, Nettie, grew out of her heart defect after birth 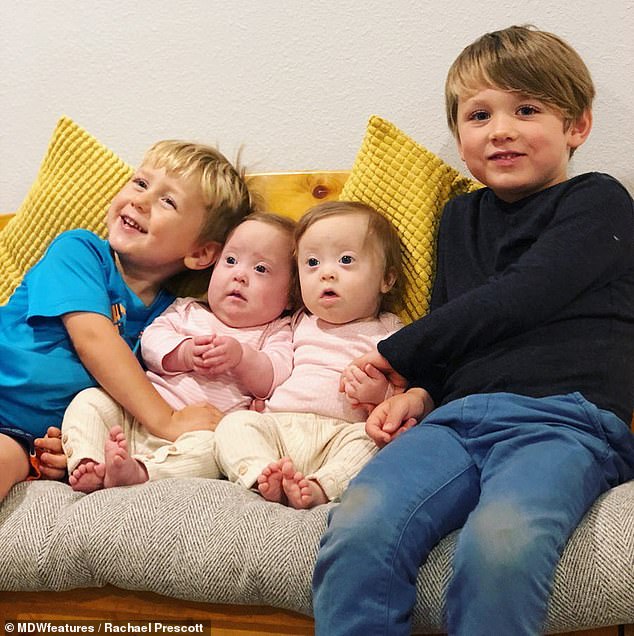 Stronger: The twins have both recovered and are now home with their family

‘We did however find out their gender. We were just far too excited to find out.’

The birth was more difficult for Rachael with twins on the way.

‘Unlike [with] our first two children, I needed to be induced and hooked up to a monitor that didn’t allow leaving the bedside,’ she explained. ‘The girls were born in the operating room, and I felt blessed as there were no birthing complications and I was able to deliver naturally. And they came out just two minutes apart.

‘The girls were quickly diagnosed as having DS, and they were greeted with celebration.’

Both twins had Trisomy 21. But the biggest problem was Lottie’s heart, which required open-heart surgery.

‘When Lottie finally had surgery, she encountered many problems, including sickness both bacterial and viral, multiple organs damaged, a collapsed lung, chylothorax, pulmonary hypertension and a miss-fitted ET tube,’ Rachael said. ‘This removed the typical road to recovery from our sight. 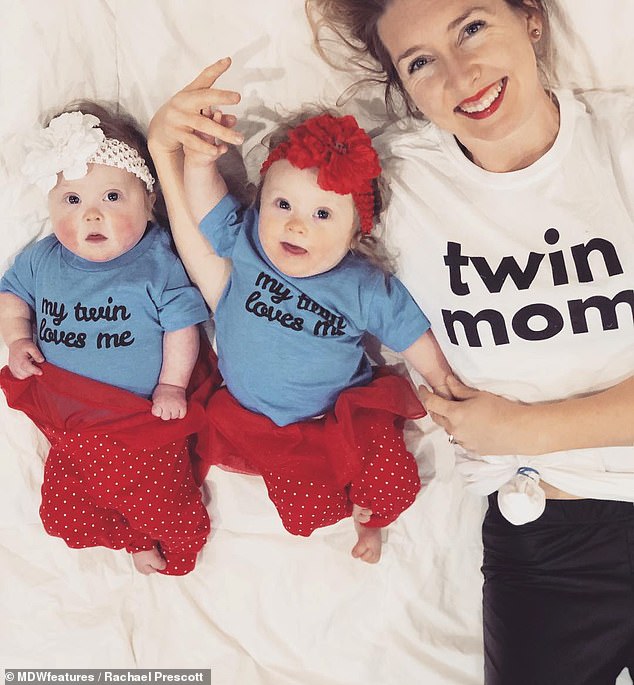 Priorities: Rachael uses her platform online to inspire acceptance among other parents if they also have children with Down syndrome

‘We reached out for prayer, and the world responded; friends, family, acquaintances, and complete strangers blanketing our little girl with petitions to recover in health.

‘Mountains were moved, her lung inflated, medications decreased, and after 35 days, we were elated to take our baby home.’

Now the girls are home acting as any other babies, crawling around, making messes, and playing with their brothers and dog, Max. Nettie doesn’t require any medication at all, and Lottie only needs to take Synthroid for hypothyroid.

‘Lottie is observant, picking up quickly on sign language and communication, whereas Nettie leads in physical development, now cruising around our living room, and free standing.

‘They are both spectacularly skilled at stealing our hearts and those of the world.’ 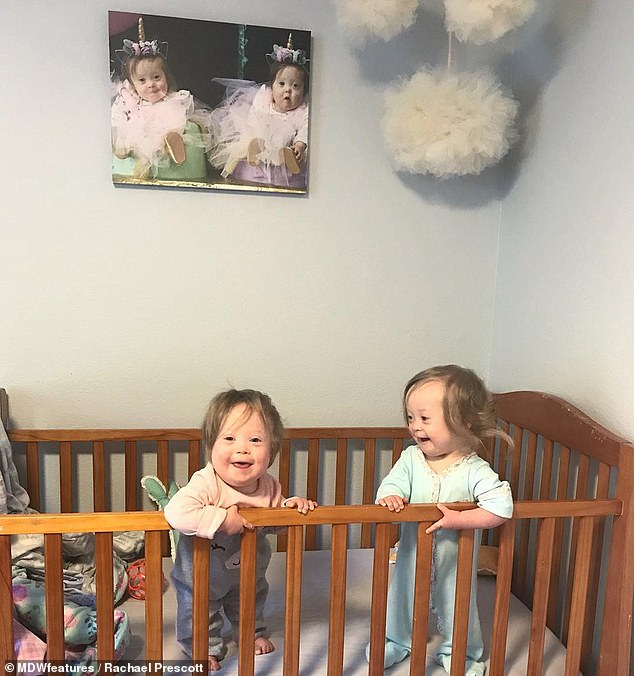 Besties: ‘We have loved every moment with our daughters, and they are the lights in our lives,’ Rachael said about her children 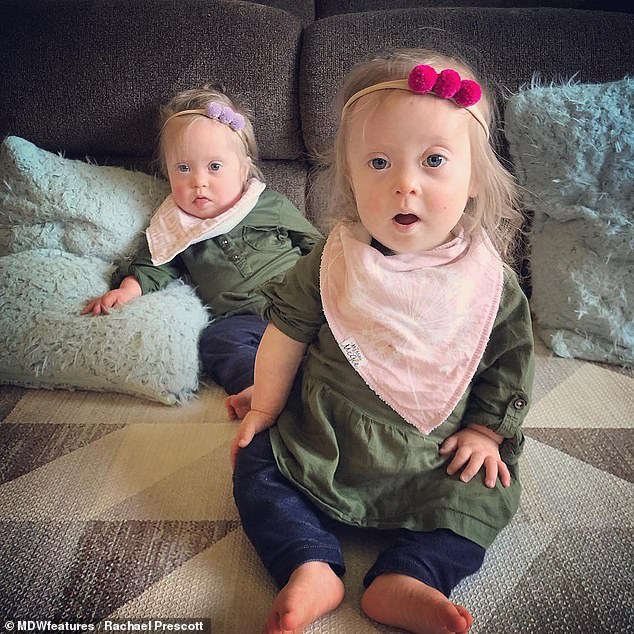 Positive thinking: Rachael encouraged other parents to make it through medical hurdles during pregnancy. She said that strength was what got her to have her two daughters

Rachael shares her family’s story to 61,000 followers on Instagram @doublingdownmom to spread awareness about parenting children with Down syndrome.

She stressed that Down syndrome should be celebrated, and that the majority of problems are in the public’s perception of it.

‘We have loved every moment with our daughters, and they are the lights in our lives,’ she said. ‘DS is nothing to fear, and everything to celebrate. The only difficult part in parenting children with DS is that the rest of the world has yet to understand the beauty and joy they radiate.

‘There are negative stigmas that have led those who lack exposure to this people group to incorrect assumptions and imposing limitations on these individuals. And this is why we share our story.

‘Society needs to turn from eradicating people with DS. We need to make a shift to teaching DS children that they can have the same love and desire to live life to the fullest as anyone else.

‘My advice to other expectant parents: cling to hope through any medical hurdles and to joy always. Celebrate your children. Never hesitate to proclaim their worth and show the rest of the world that DS is not a defect — it is a blessing.’