New York Governor Andrew Cuomo has announced that New York Fashion Week will take place this September — but runway shows are about to look quite different.

Cuomo said in a press release today that NYFW would go on as usual next month, but with a few changes.

Most notably, runway shows must operate in strict compliance with the state’s health and safety guidelines, meaning limited or no spectators and a cap on the number of professionals — including models, makeup artists, and designers — allowed in a room at one time. 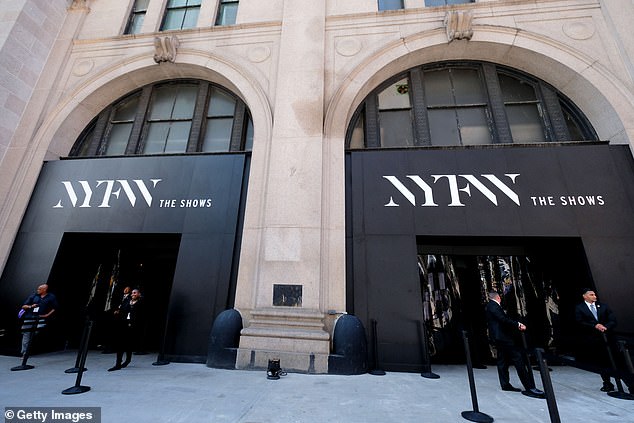 Plans: New York Governor Andrew Cuomo has announced that New York Fashion Week will take place this September — but runway shows are about to look quite different 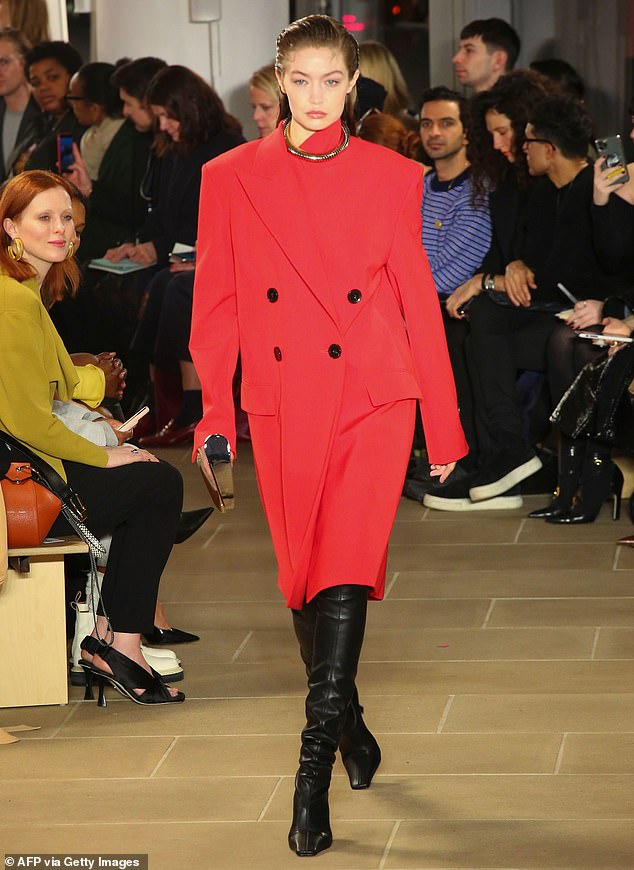 Limitations: Runway shows must operate in strict compliance with the state’s health and safety guidelines, meaning limited or no spectators 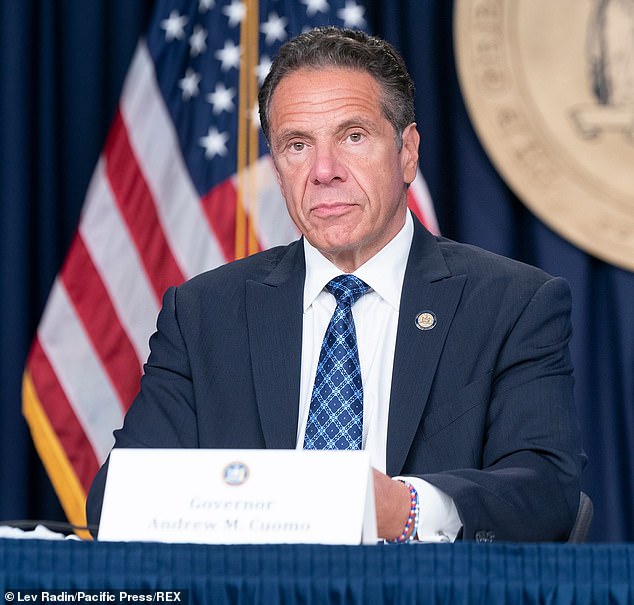 ‘New York City is the fashion capital of the world and New York Fashion Week celebrates the ingenuity of this city, and our unmatched creative talent,’ Governor Cuomo said

Fashion Week was last held in February, before the pandemic overtook the US — so this is the first time that the community must grapple with the new restrictions.

First, New York Fashion Week will operate on a tighter schedule from September 13 to 17, shortened by several days from its typical length.

The event will include live shows but will shift heavily toward virtual programming, with outdoor events capped at 50 people and indoor events restricted to 50 per cent capacity.

Those restrictions apply not just to audience members, but those involved in the show: designers, models, stylists, makeup artists, and other staff members.

It will also likely mean a massive reduction in photographers and videographers.

While spectators won’t be allowed at indoor events, some will be able to attend outdoor events on the Spring Place rooftop. 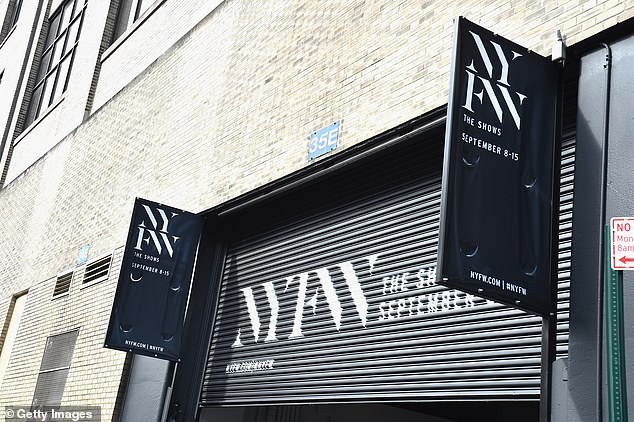 Fast fashion: New York Fashion Week will operate on a tighter schedule from September 13 to 17, shortened by several days from its typical length 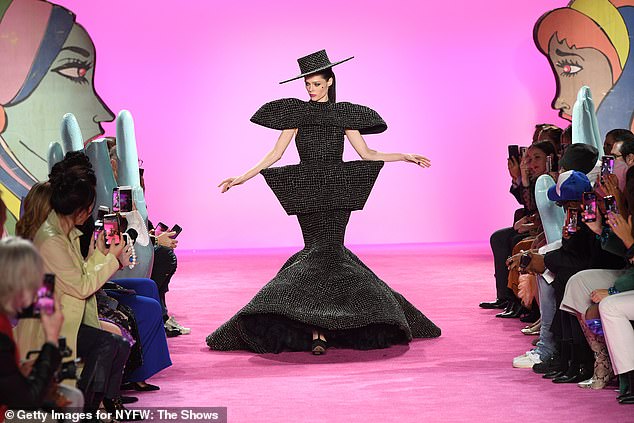 Changes: The event will include live shows but will shift heavily toward virtual programming, with outdoor events capped at 50 people and indoor events restricted to 50 per cent capacity 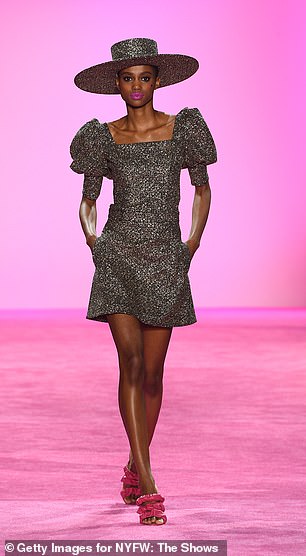 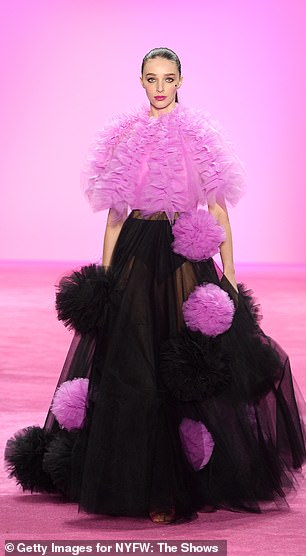 On the calendar: Among the designers presenting this season are Alice + Olivia, Amen, and Christian Siriano (pictured) 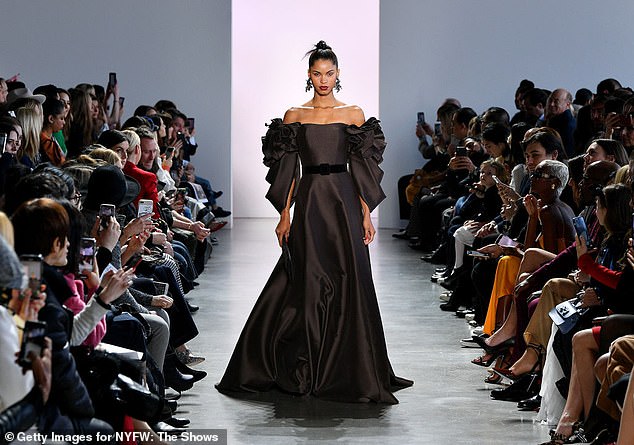 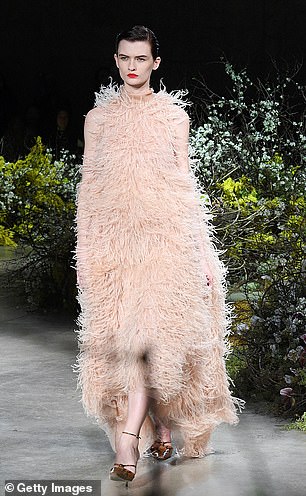 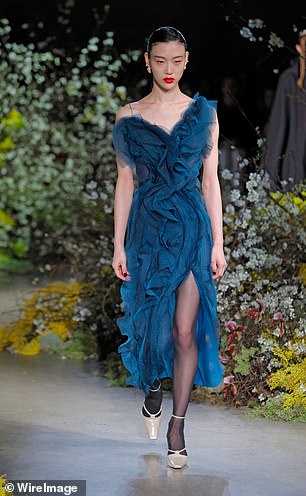 Rules: While spectators won’t be allowed at indoor events, some will be able to attend outdoor events on the Spring Place rooftop (Jason Wu, pictured, also scheduled to show)

‘When COVID-19 hit New York, so many of our cherished events were forced to cancel or be postponed. The pandemic is far from over, but we’re proud to support event organizer IMG in moving forward with NYFW, in adherence with strict state public health guidance.

‘Safety, as always, is our top priority and we commend the hosts, and all participating designers, for their innovative, New York Smart solutions to bring this event to life.’

Those present at the events will also be expected to adhere to social distancing, diagnostic testing, and health screening procedures — including temperature tests prior to admittance.

Face coverings will also be required.

‘We are grateful to Governor Cuomo and his leadership for their swift, successful response in fighting the spread of the coronavirus, which has now set the standard of excellence for our nation,’ the Executive Vice President of IMG’s Fashion Events Group, Leslie Russo, said. 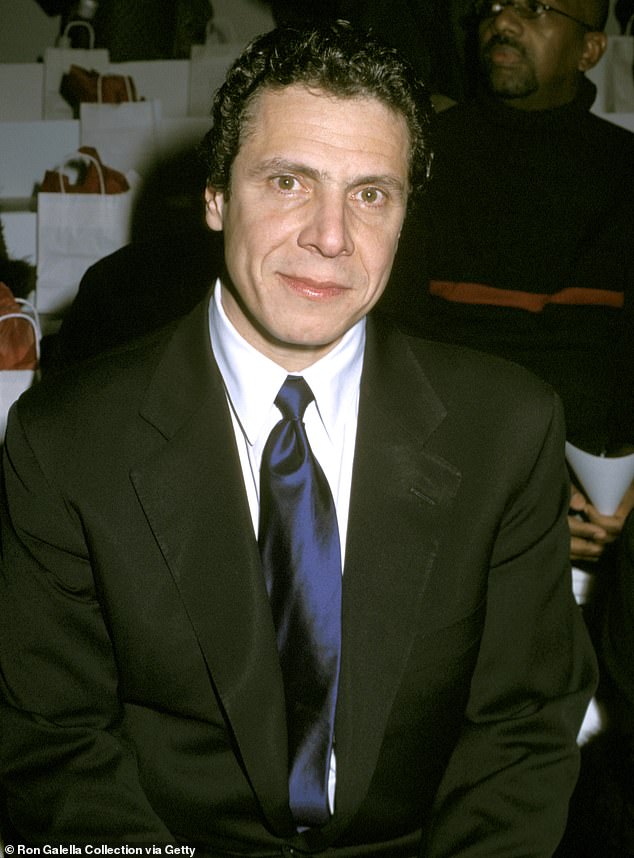 Flashback: Governor Cuomo has attended NYFW shows in the past (pictured at Baby Phat’s Fall 2002 show, while he was running for governor in his first failed bid) 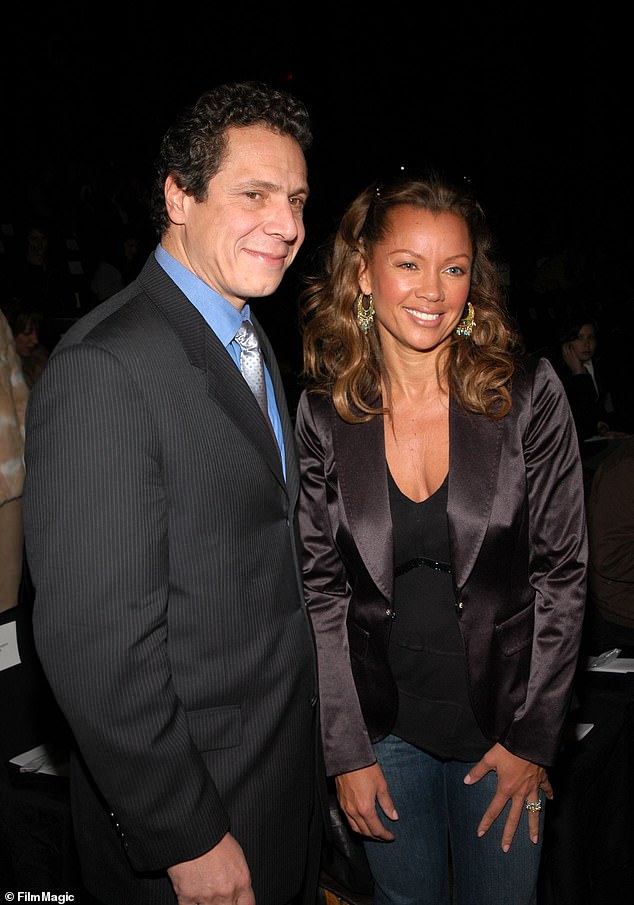 Fashion fan: The Governor is pictured with Vanessa Williams at the Kenneth Cole show in February 2005 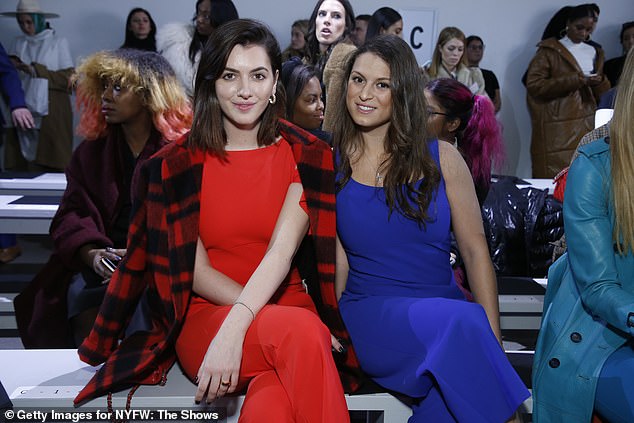 Next gen: More recently, his daughter Cara Kennedy-Cuomo (right) attended a show with her cousin Kyra Kennedy in February

‘The past six months have been exceedingly difficult for the fashion industry, and we are proud to offer an avenue for designers, models, stylists, hair and makeup artists, photographers, production teams — ­and the innumerable other professionals who work in, or adjacent to, the fashion industry during New York Fashion Week — to safely get back to work this September.’

Proenza Schouler was included as part of the lineup, but a spokeswoman told WWD that they have not actually committed to participation, and have a ‘creative’ showing of their collection planned for October.

Jason Wu, who will be participating, said he will have a live show with models, but an audience of just 25 to 30 people at Spring Studios. It will also be presented to a virtual audience.

Cuomo’s announcement about New York Fashion Week comes as national coronavirus cases across the US declined for the fifth week in a row, with New York state maintaining a positive test rate of less than one per cent as of Monday.

The Governor announced on Tuesday that of the 67,255 tests reported on Monday, just 629 were positive – meaning New York has a positive test rate 0.94 per cent. 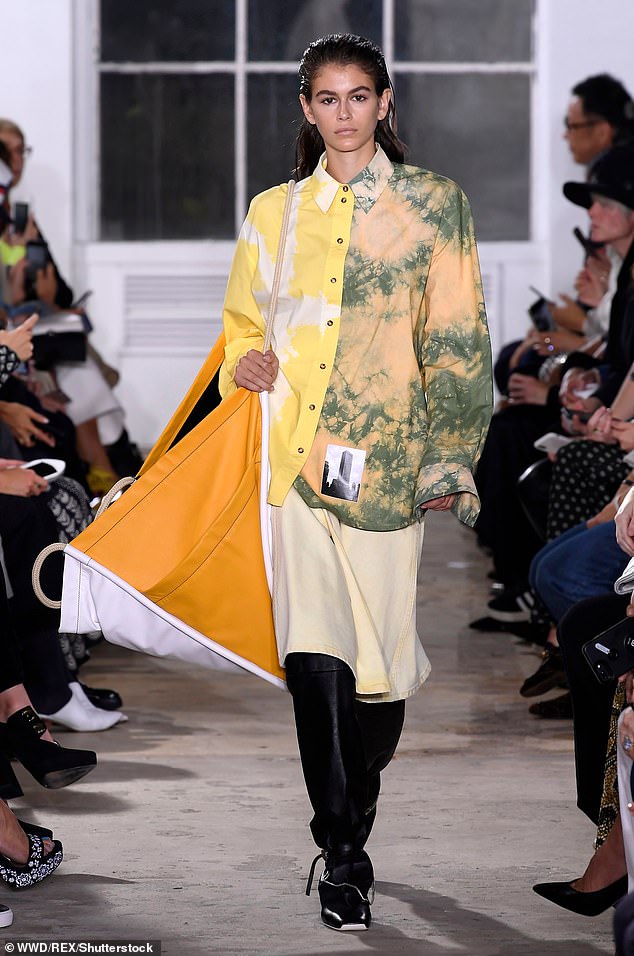 Proenza Schouler was included in the lineup, but the brand they have not actually committed to participation, and have a ‘creative’ showing of their collection planned for October

However, Cuomo still urged New Yorkers to remain ‘vigilant’, once again highlighting the importance of social distancing and face masks in the fight against the spread of the virus.

‘New Yorkers should stay vigilant and be careful – wear a mask, socially distance, and be smart,’ he said before warning: ‘This pandemic is not over.’

The shift toward virtual shows may be the final nail in the coffin of Fashion Week as we know it, after years of shifts and changes contributed to declining relevance.

New York Fashion Week in its current form came to be in 1993, according to Vox, when the Council of Fashion Designers of America centralized what had been a less-cohesive series of designer presentations all over the city.

Until 2010, all major shows were held in tents in Bryant Park, until the 300+ shows grew too big for the space and the event moved to Lincoln Center.

But after the event got kicked out of Lincoln Center in 2015, it spilled out across several venues once again — and more and more designers began doing their own things, planning independent shows at the venus of their choice.

Some even moved outside the traditional calendar, holding shows at other dates — as is being seen now with the likes of Proenza Schoulder and Michael Kors bumping their shows until October.

But even with fashion week changing shape, some critics say it’s not just evolving — it’s dying.

Vox says it ‘has zero relevance to the way modern shoppers buy stuff.’ 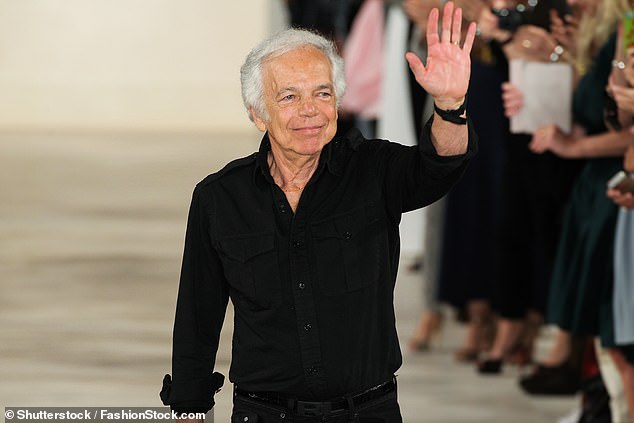 Like flies: In February of this year, Ralph Lauren (pictured), Tommy Hilfiger, Jeremy Scott, and Phillip Lim all sat out of NYFW

The original purpose of fashion shows was to present new collections to professional buyers — who would order the designs for their stores — and the media — who would feature it in magazines.

But with the internet, the way customers buy clothes has changed dramatically. It has also become unnecessary for collections to be shown months in advance.

‘In a world that has become increasingly immediate, the current way of showing a collection four months before it is available to consumers is an antiquated idea and one that no longer makes sense,’ Tom Ford told WWD in 2016.

Some designers have adapted, shifting to a see-now, buy-now model.

Others are trying a mix-and-match approach, like Gucci and Balenciaga — which still hold runway shows, but also debut new designs in between.

Perhaps seeing the writing on the wall, some designers have been forgoing Fashion Week altogether — like Misha Nonoo, who has held an ‘Insta-Show’ on Instagram.

In February of this year, Ralph Lauren, Tommy Hilfiger, Jeremy Scott, and Phillip Lim all sat out of NYFW.