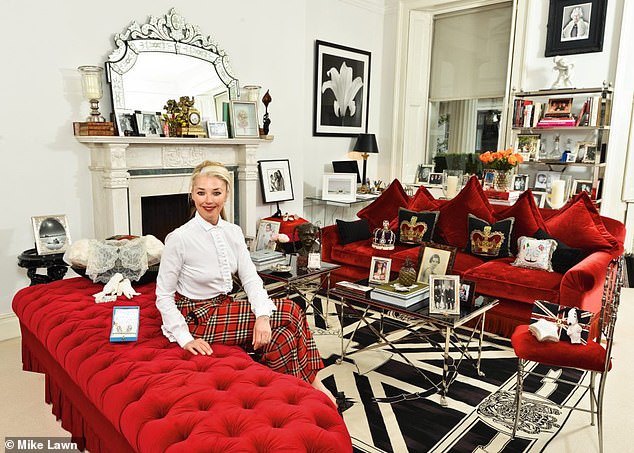 Tamara Beckwith (pictured), 49, reveals the items of personal significance inside the sitting room of her home in Chelsea

Ideally I’d live in the country, but for now London is the only practical solution for me, my Italian husband Giorgio Veroni and our two children – Violet, known as Vivi, ten, and Vero, four.

We’ve been here about five years and we both enjoyed decorating this room. This is a picture of us on our wedding day in Venice in 2007.

My dress was made by Valentino, who is a very good friend of ours, and it came with this bolero jacket.

The garter I wore belonged to my mother Paula.

My family are all ballet mad and this bronze sculpture of a ballet shoe with a flower was made by a French artist from a little village called Peillon in the hills behind Nice.

Every summer we’d go there, have lunch, and then toddle along to visit the artist in his studio.

His bronzes were wonderful and my mother bought many of them.

In the frame beside it is a dried bouquet of flowers with pink ribbons, which was given to Margot Fonteyn at the end of a show.

I love this picture of me, my eldest child Anouska and my daughter Vivi, taken by Terry O’Neill. 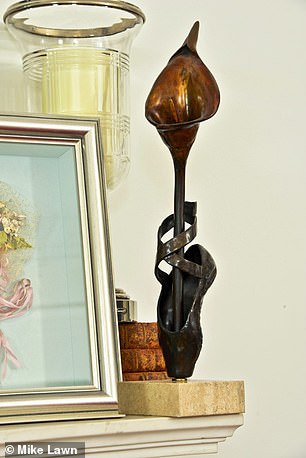 I’m proud of Anouska, who has a lovely partner, alternative therapist Luke McSwiney, who’s good at calling Anouska out on her nonsense (her words, not mine).

She’s made me a delighted first-time grandmother, with her daughter Luna.

My son Vero insists she’s his baby and gets so excited when she comes to stay.

These diamond earrings were lent to me on my wedding day by Humphrey Butler, who deals in vintage jewellery.

He’s a great character and I love him. As a surprise my mother bought them for me.

She was a proper mummy – my sister Clare and I were always her priority.

When I had Anouska at 17, my parents were amazing and she was an extra mother to my baby while I was still growing up.

My mother died almost eight years ago of endometrial cancer, and my sister and I helped set up a women’s health charity to sponsor research at The Royal Marsden hospital and to raise awareness.

In 2013 I appeared on Channel 4’s antiques show Four Rooms.

I was a buyer and couldn’t resist spending £1,000 on this replica of the crown that the Queen wore for her coronation.

The seller was a real dandy and a wonderfully eccentric character – so that beguiled me too.

I love the crown and we’re all overly royalist anyway.

It’s also a bit of fun and when friends come round they have their photograph taken wearing it.

6 SNOOPING IN THE CUPBOARD!

I used to study ballet in Richmond and when I was nine I’d see this Snoopy toy in a little shop next to the school and would gaze at it longingly.

I had time to do so as my mother, bless her, was usually late picking us up.

I saved up my pocket money, but when I went in the shop to buy him, he’d been sold.

It was just before Christmas and I had a feeling my mother had something to do with it, so I went through her cupboards and found it.

Every day I secretly took him out, chatted to him and then put him back. I recently found him again.

As told to Yvonne Swann. For more information on Tamara’s charity see ladygardenfoundation.com and for her gallery visit thelittleblackgallery.com