An American mother has been labeled ‘manipulative and controlling’ for offering to pay for her daughters’ wedding gowns — but only if they agreed to get the dresses that she liked best.

Reddit user JuneBLawrence said that she has two daughters, and went dress shopping with each of them when they got engaged.

But she only helped pay for one of their gowns.

Each time, the mother offered to cover half the cost of the gown that she preferred — and though her younger daughter took her up on it, her older daughter liked another dress better and was left to pay for it by herself. 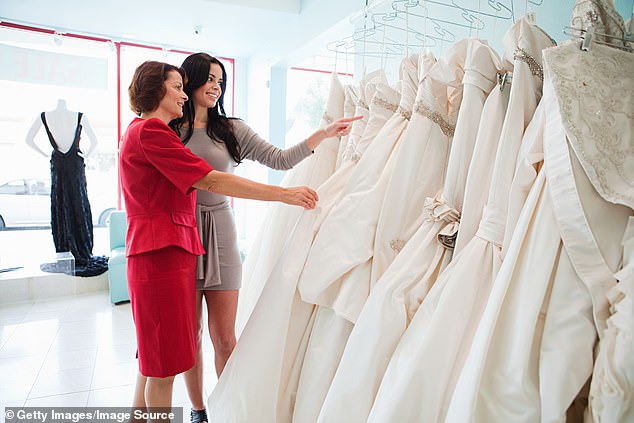 Manipulative: An American mother has been labeled ‘controlling’ for offering to pay for her daughters’ wedding gowns — but only if they agreed to get the dresses that she liked best

JuneBLawrence has been using financial intensives to push her children in different directions for years.

When her son got married three years ago, she went dress shopping with the bride-to-be and her family and nudged her toward buying the veil she preferred.

‘She was going back and forth between two veils that were both over budget,’ she recalled. ‘I had one that I preferred so I offered to pay for it as a gift if she chose it.

‘My daughter-in-law was happy to get the $400 cathedral veil for free and I was happy to give it to her. My son’s mother-in-law thanked me for my generosity and I said it was my pleasure.

‘This was a great way for me to have some input on the wedding in a way that benefits everyone,’ she added.

She attempted to have ‘input’ in a similar way when her older daughter tied the knot two years ago, but it didn’t reap the same results.

She said her daughter was ‘indecisive,’ but she herself loved a specific ‘gorgeous/timeless dress’ and offered to pay half if her daughter chose it. 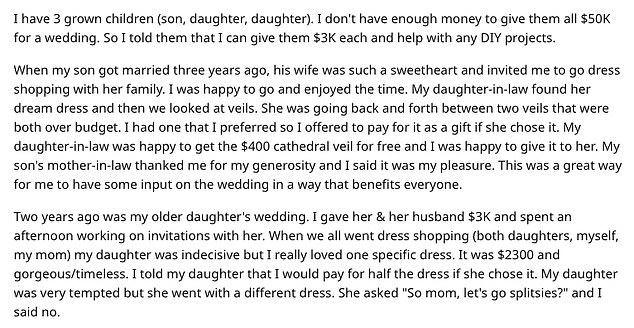 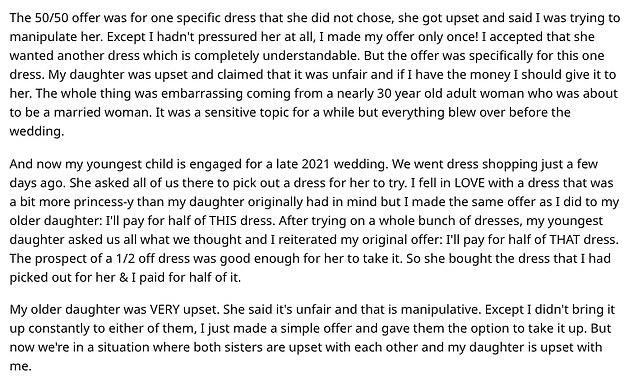 Her way or the highway! When one of her daughters preferred another dress, she refused to pay a penny

Ultimately, her daughter chose a different design, and then asked her mom to split it. She said no.

‘The 50/50 offer was for one specific dress that she did not chose,’ the mom said.

‘She got upset and said I was trying to manipulate her. Except I hadn’t pressured her at all, I made my offer only once!’ the mother insisted. ‘I accepted that she wanted another dress which is completely understandable. But the offer was specifically for this one dress.’

JuneBLawrence said her daughter was ‘upset,’ calling her reaction ’embarrassing coming from a nearly 30-year-old adult woman who was about to be a married woman.’

With time, they moved past it — until JuneBLawrence’s younger daughter started planning her 2021 wedding and they all went dress shipping.

‘I fell in LOVE with a dress that was a bit more princess-y than my daughter originally had in mind but I made the same offer as I did to my older daughter: I’ll pay for half of THIS dress,’ she said.

‘After trying on a whole bunch of dresses, my youngest daughter asked us all what we thought and I reiterated my original offer: I’ll pay for half of THAT dress. The prospect of a 1/2 off dress was good enough for her to take it. So she bought the dress that I had picked out for her & I paid for half of it.’

Now, though, her oldest daughter is ‘VERY upset,’ saying it’s ‘unfair’ and ‘manipulative’.

‘Except I didn’t bring it up constantly to either of them, I just made a simple offer and gave them the option to take it up,’ the mother insists. ‘But now we’re in a situation where both sisters are upset with each other and my daughter is upset with me.’

Commenters on Reddit are in near-total agreement with the older daughter, accusing the mother of trying to control her children with gifts and money.

‘Your older daughter is right, you are manipulative and controlling,’ wrote one. ‘You didn’t even consider options, your choice of dress or nothing… How much are you going to pay them to let you name their kids?’

‘Lord help your daughters because based on how your daughter knew to call out your manipulations, this is far from the only time you’ve done this kind of s*** to them,’ said another.

‘You need a therapist, not a checkbook with which to weaponize one of the biggest moments of your daughters’ lives with,’ wrote a third.

In other comments, she has been called ‘rude,’ ‘cringey,’ ‘nasty,’ ‘hurtful,’ ‘delusional,’ and ‘entitled.’

‘These aren’t dolls you can dress up like breathing Barbies to live vicariously through for your personal gratification,’ wrote one more. ‘They are your daughters (+in law). You might think what you were doing was generous and charming but it honestly was just self serving and disrespectful.’